By choosing an X-chromosome cipher, McCain is trying to beat Obama at the identity politics game. But it's dangerous to fight on your opponent's turf. 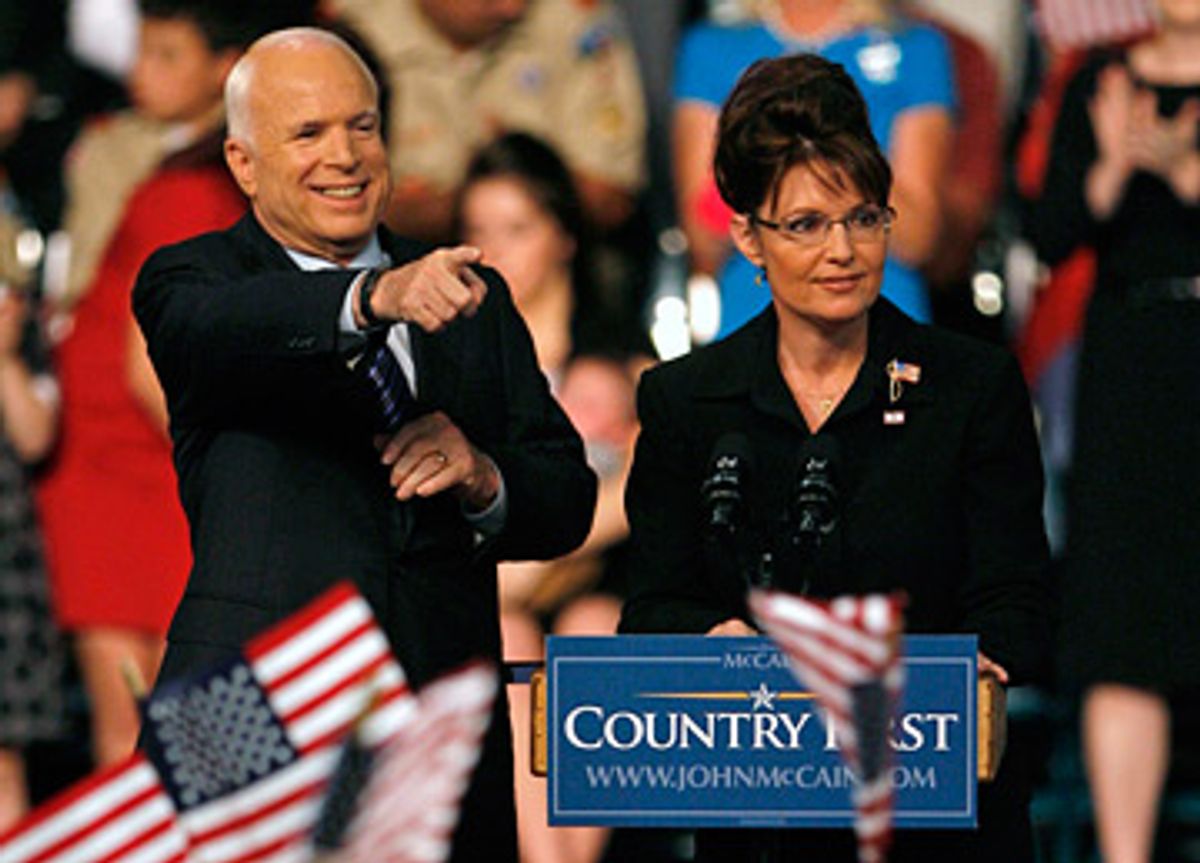 Just when we thought the endless gender vs. race war was over, John McCain is trying to start it up again. By choosing Alaska Gov. Sarah Palin as his running mate, the senator from Arizona is trying to ensure that the 2008 election will be decided by identity politics -- and making sure that the Republicans have a huge statistical advantage. There are at least 10 million conservative, pro-life white women in this country. There is one liberal half-black former editor of the Harvard Law Review.

At least in the short run, McCain's play of the female card was a cunning move. It instantly knocked Barack Obama and his stirring acceptance speech off the front page. It was the biggest buzz-kill since Thorazine was invented. And it adroitly reconciled McCain's need to reach out to his party's right-wing base with his need to shore up his image as a maverick, which appeals to independents. In the all-important battle of political semiotics, it was the mirror-opposite image of Obama's choice of Joe Biden. Just as the young, un-American, weak, unknown black guy chose a formidable old Caucasian man with white hair, so the old, tired, establishment, tied-to-Bush white male chose a youngish woman from a state closer to Russia than to Washington, D.C.

But McCain's move could backfire. Palin, who just 20 months ago was the mayor of a town of 6,300 people, may have the thinnest résumé of any vice-presidential pick in modern history. This makes a mockery of McCain's attacks on Obama as inexperienced. It also forces McCain to take on Obama without backup -- and that's not a fight it's clear McCain can win. If Obama cleans McCain's clock in the debates -- and Obama's feisty calling-out of his rival in his acceptance speech serves notice that he isn't going to back down, on national security or anything else -- McCain won't have a tag-team partner whose hand he can slap. What's Palin, whose knowledge of foreign policy has not been detected by any instruments known to man, going to say about Iraq? Insist that a fresh deployment of Marines be carried in by dog sled?

But perhaps even more damaging, Palin's almost total lack of qualifications makes McCain's pick look like blatant tokenism. It is painfully clear that he only chose her because she fills a symbolic/demographic niche. Of course, vice-presidential picks are always driven by such concerns, by the need to shore up political weaknesses and appeal to crucial swing voters. But rarely, if ever, has that Machiavellian truth been so obvious.

McCain's move looks bold, but it might be desperate -- and based on a fundamental misreading of the political landscape. Ironically, McCain may have credulously swallowed the media's over-hyped story about how angry, hysterical PUMAS were so irrationally bitter at Obama that they were prepared to vote for McCain. But Hillary and Bill Clinton's strong speeches successfully united their party in Denver, and few Democratic women seem likely to be drawn away by a pro-life hard-line Christian rightist who wants to drill every inch of her home state for oil.

Will Palin play better with independents? By choosing, basically, a Bushite right-winger with two X chromosomes, McCain has made his campaign all about empty symbolism -- the very thing he and the GOP have accused the Obama campaign of trading in. This is a dangerous move because he's fighting on Obama's turf. McCain is gambling that more swing and independent voters will symbolically identify with a woman, any woman, than they will with a black man. But the problem is that the McCain-Palin ticket feels utterly artificial, constructed, like the monster in the dreadful B movie, "The Incredible Two-Headed Transplant." That calculated feeling undercuts its appeal. If you're going to vote on the basis of symbolism, you want some emotional bang for your buck -- and Palin can't compete with Obama here.

Yes, Palin has an image as a tough frontier chick who rides a motorcycle and packs a gun. That'll pick up some libertarian and independent votes. But will independent voters who are wary of Obama's candidacy because they think he's a mere symbol suddenly embrace an equally symbolic candidate on the right?

Even if the dueling symbols cancel each other out, there's the little matter of substance. When it comes to offering actual change, Palin brings about as much to the table as Condoleezza Rice. McCain is hoping that independents are so beholden to identity politics, this time of the female variety, that they will reelect the Bush administration. But even sisterhood may not be powerful enough for that.