Palin, pregnancy and the presidency

The feminization of the American Republican presidential ticket. 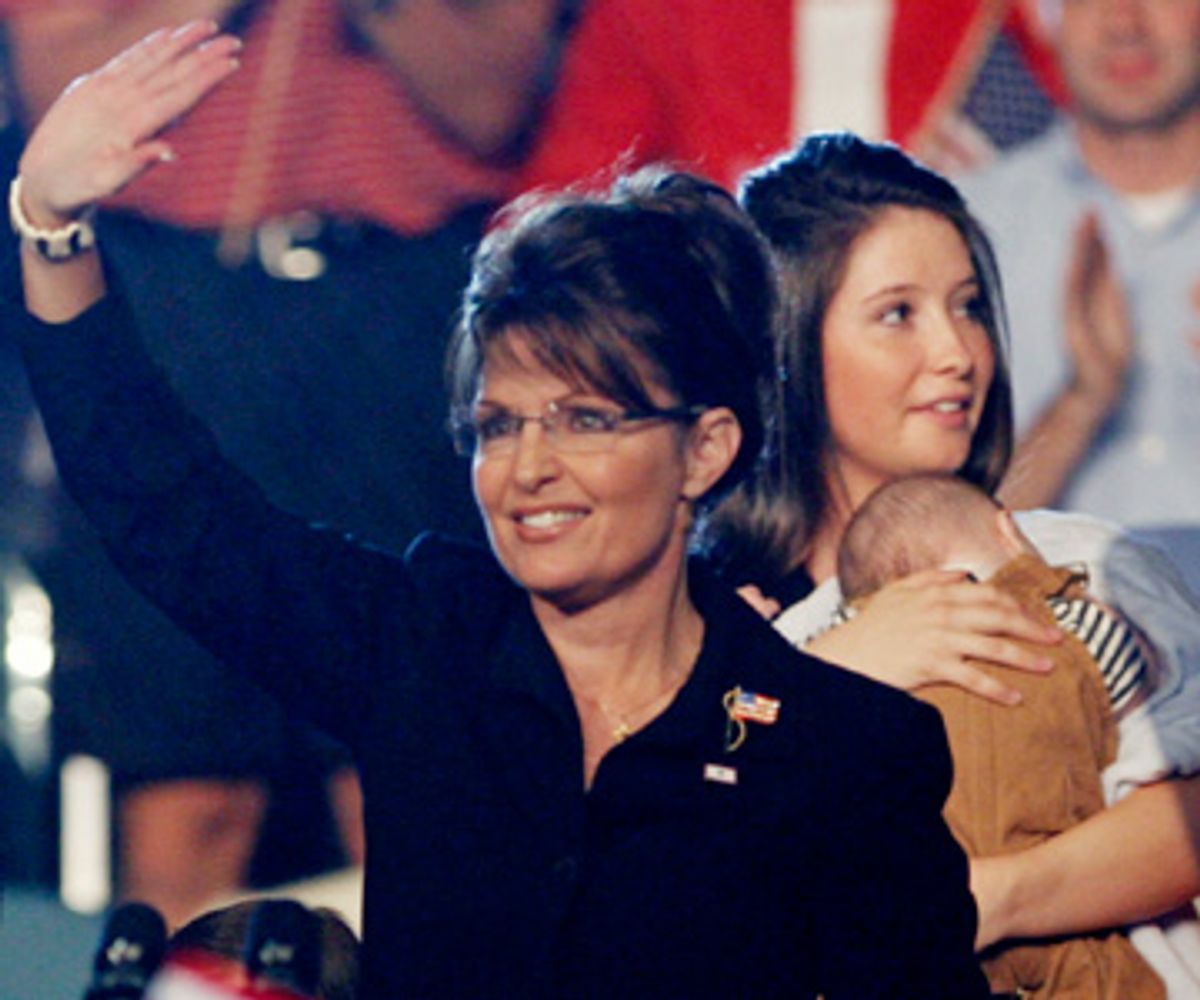 Alaska Gov. Sarah Palin waves in front of her daughter Bristol and son Trig at a campaign event in Dayton, Ohio, Friday.

News today that Sarah Palin's 17-year-old daughter Bristol is "about five months" pregnant means that it only took 48 hours after the announcement that the second woman in American history was joining a presidential ticket for her nomination to devolve into a sudsy soap-operatic scandal.

Some surely think it's great news that the Republicans may be about to hang by their own family-values noose; others may deem the whole thing tawdry and so unrelated to the issues that it should be off limits. Megan Carpentier at Jezebel is justifiably horrified by the Schadenfreude-laced glee expressed by her peers in the media, while Ann Friedman at Feministing writes smartly about the hypocrisy of the McCain camp's role in the situation.

Me, I'm just hanging my head about the sorry set of events that led us to be having this conversation this year about a candidate, who, no matter how repugnant her political beliefs, is a history maker who will forever be known as the second woman ever on an American presidential ticket. After a year in which Geraldine Ferraro's historical stock (never sky-high to begin after mini-scandals about her husband and son) plummeted thanks to her often unhelpful involvement in the Clinton campaign, this election cycle could turn from one that was electrifying and energizing for women into one that situates their political prospects firmly back in the feminized territory of sex scandals, babies and mothering.

How we got from the dispiriting political and ideological record of Sarah Palin -- that she is adamantly pro-life and anti-gay marriage, that she is a lifetime member of the NRA, that she has no foreign policy experience and supports the teaching of creationism alongside evolution in schools -- to the uterine activity of her family, makes perfect, human sense: Who wants to talk about boring policy when we can talk about teens and sex and pregnancy?

Of course, there are indeed some very real, very serious issues raised by the revelation of Bristol Palin's pregnancy, which Palin and the McCain camp made public today in response to rampant Internet rumors that Palin had faked her pregnancy with infant Trig to cover up an earlier Bristol gestation period. (Study questions: Why, in refuting those original rumors, did Palin present as evidence the news that her daughter was pregnant, rather than simply handing over hospital documents and a birth certificate for Trig? Answer: It's a mystery! Why did she get on a long plane ride to Alaska after her water broke a month early in Texas? Answer: It's a mystery! Why was her staff surprised to learn that the governor was pregnant one month before she gave birth? Answer: It's a mystery!)

But no matter. The first, and most serious issue raised by today's official story is that the language used in the public statement about Bristol is at odds with the McCain-Palin line on reproductive rights. According to the New York Times story, "Bristol Palin made the decision on her own to keep the baby, McCain aides said." That's just peachy in its presumption that Bristol had a choice about whether or not to continue her pregnancy. It's true that in 2008, she certainly does have a legal choice. But she wouldn't under the proposed administration of her mother and John McCain, both of whom oppose abortion rights and tell us they would work to overturn Roe. Palin is a member of Feminists for Life, and once called herself, during her failed 2002 run for Alaska's lieutenant governor, as "pro-life as any candidate can be." To celebrate the decision-making freedoms of her daughter was an irrational, unproductive choice.

It's a logic loophole through which McCain himself has traveled in the past. As Kate Sheppard has reported in In These Times, McCain, who supports the overturning of Roe v. Wade, said during his 2000 run for president that if his daughter got pregnant, "The final decision would be made by Meghan with our advice and counsel." When reporters pointed out to him that he had just described a pro-choice situation, McCain replied, "I don't think it is the pro-choice position to say that my daughter and my wife and I will discuss something that is a family matter that we have to decide." Yes. It is the pro-choice position, or at least part of it. So McCain has already been caught in the same goof made today.

The Bristol baby is also likely to get McCain all wound up in talk of his support for abstinence-only education. The Arizona senator has a record of voting against programs that use federal money to distribute condoms; he has voted against federal funding for programs that teach medically accurate, comprehensive sex education; and he has voted down programs that would make birth control more widely available. In March 2007, he stumbled when asked about his position on contraception in HIV prevention, asking an aid to "find out what my position is on contraception -- I'm sure I'm opposed to government spending on it, I'm sure I support the president's policies on it."

As for Palin's stand on abstinence-only education, it's not great, but she hasn't been a particularly disruptive advocate of Alaska's sex-ed programs, which says something (a very little something) about her lack of enthusiasm for abstinence-only programs during George Bush's eight year roll-back of reproductive rights and his worldwide propagation of abstinence-only reprogramming. Based on early reporting, Palin has only once weighed in on the topic. When asked a confusingly worded question about whether she would "support funding for abstinence-until-marriage education instead of for explicit sex-education programs, school-based clinics, and the distribution of contraceptives in schools," she replied, "Yes, the explicit sex-ed programs will not find my support." She is a member of Feminists for Life, an anti-choice group that does not take a prohibitive stand on birth control.

For the right, the story of Palin's daughter's pregnancy will also become fodder to move their ball along. Tony Perkins of the Family Research Council has already hopped into the conversation with this helpful statement, that teen pregnancy "is problem that we remain committed to reducing through encouraging young people to practice abstinence." Perkins also congratulated Bristol on "following her mother and father's example of choosing life in the midst of a difficult situation."

It's certainly tempting to fall into the trap of attacking back, of making Bristol Palin and her boyfriend and her fetus the football we kick around for the next two months, four years, or however long Palin survives on the Republican ticket.

But how far can that take us? The news that many politicians are hypocrites should not blow many minds. This rhetorical game -- asking politicians who make the laws to apply them to themselves or their own kin -- is an old American favorite. It happens when Michael Moore accosts congresspeople on the street asking why their kids aren't in the Iraq war they voted for; it happens when Michael Dukakis is asked in a debate how he would respond if his own wife were raped; it even happens when Barack Obama talks about getting the rest of the country the same kind of healthcare packages he and his fellow members of Congress have given themselves.

It's a strategy that can be useful, like when it comes to healthcare arguments. But when applied to personal turmoil, the unearthing of stuff that few families could survive unscathed, it becomes more troubling. It is a game that ignores the fact that there's a real person, a real family, a real kid about to have another real kid, all of whom are being used as political punching bags. When it suits us, we bypass the fact that many of us believe that what happens within the families and bedrooms of our politicians -- while diverting, even titillating -- shouldn't cloud our perceptions of how they do their jobs. It's what we believed when Clinton was witch-hunted out of his second term, when we talk about Franklin Roosevelt or John Kennedy, when we fete Ted Kennedy.

And while his campaign may or may not be hooting and hollering about this story line in private, in public, Barack Obama drew a very firm line on the Palin revelation, noting that if anyone in his campaign was pushing the story forward they would be fired. Bristol Palin's pregnancy, Obama said, "has no relevance to Governor Palin's performance as a governor or her potential performance as a vice president." He also pointed out that his own mother had been 18 when she gave birth to him. "How family deals with issues and teen-age children -- that shouldn't be the topic of our politics," Obama said.

The issue here isn't why Sarah Palin's daughter got pregnant or is choosing to stay pregnant, though the narrative (and gotcha) appeals of both plotlines are evident. It's why the hell John McCain, in his attempt to pick a chick to woo Democratic woman, picked one who had a family drama that he reportedly knew about. If he understands the first thing about the American people and their thirst for scandal, he must have realized it would be all anyone could talk about.

Why, when he had women like Kay Bailey Hutchison, Liddy Dole, Condoleezza Rice, Christine Todd Whitman or Meg Whitman to choose from did he select a running mate with a pre-made family drama for voters and the media to latch onto?

Women -- the same women who may or may not have supported Hillary, and who are applauding McCain's supposedly go-girl choice of Palin as his veep -- should be furious at the Republican nominee for ensuring that the history-making woman he tapped will be considered not on her intellectual or political merits, but on her reproductive ones.

In his callous, superficial and ill-judged attempt to woo women voters with the presence of mammary glands on his ticket -- hot, young ones to boot -- McCain has committed a sickening grievance against both voters and those female politicians whom he purports to respect and support. What a failure by McCain to have this woman -- with her pregnancies and progeny and sex life and child-rearing prowess now being inspected instead of her policy and voting history -- stand in for, and someday, possibly emblemize the political progress of American women, especially at a moment at which women had, temporarily it seems, risen far enough above our gestational capabilities to be taken seriously in the race for the White House.