Republicans try to brush off the tempest over Sarah Palin's pregnant daughter and turn that other storm in Louisiana into a political prop. 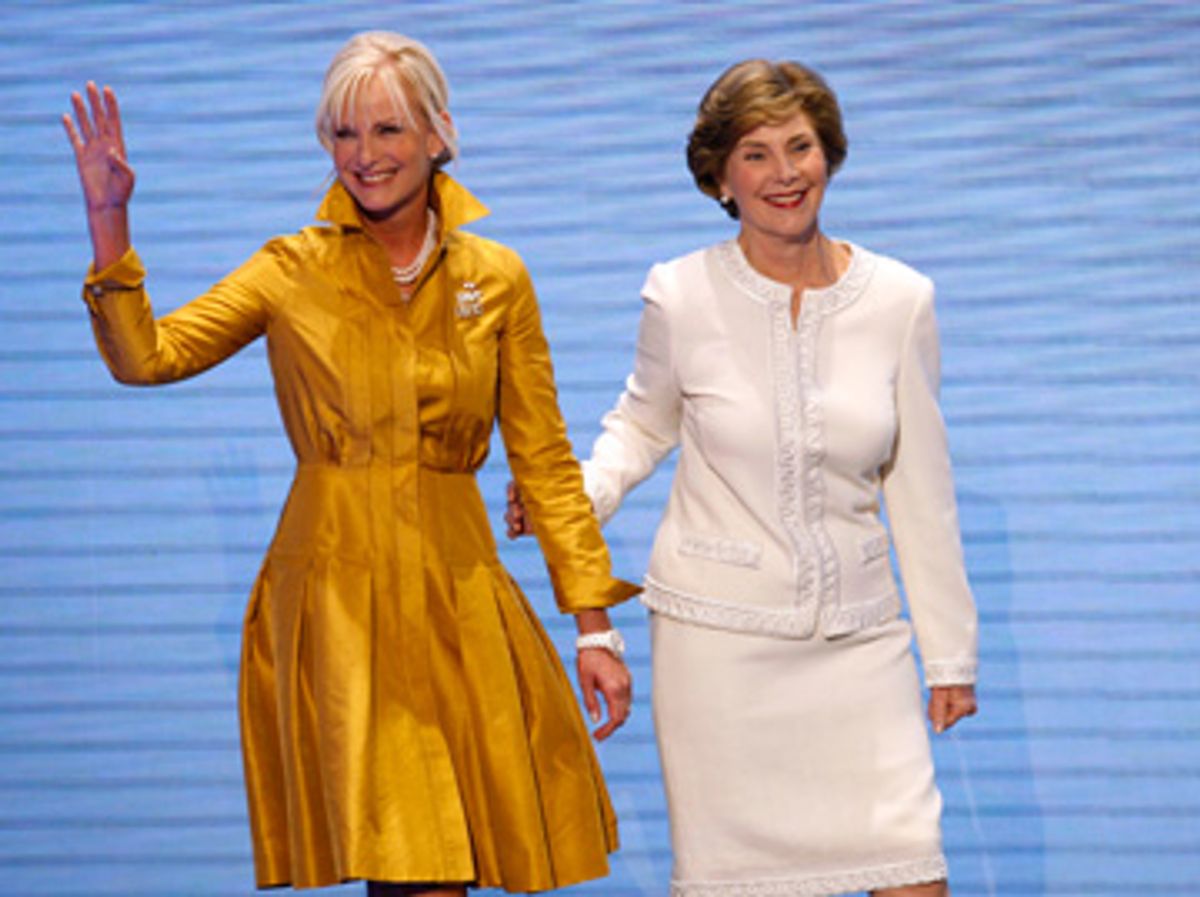 Hurricanes down south, pregnant teenagers up north, lots of Republicans everywhere you looked -- it was just your average Labor Day here in the Twin Cities.

John McCain's aides couldn't possibly have been expecting things to go this way when they planned out the first day of a nominating convention for which he'd been waiting years. Sure, there were some silver linings in the clouds from the campaign's perspective: George Bush and Dick Cheney were far, far away from the Xcel Energy Center. In an occasionally heavy-handed display of concern for Hurricane Gustav's victims on the Gulf Coast, McCain canceled most of the program and turned delegates loose as charity fundraisers, trying to show (and not just tell) voters that he -- unlike, ahem, that other guy -- puts principle before politics and country before party. Instead of attacks on Barack Obama, viewers at home who tuned in to the convention would have seen a Republican Party practically transformed into the Red Cross (and cable news pundits went along with the new story line, without many noting that the "principled" decision to change the schedule helped feed into McCain's basic campaign narrative).

But then, of course, there was that other story. News that Sarah Palin's 17-year-old daughter was five months pregnant spread through the convention quietly, but quickly, all day. Officially, McCain's campaign said it was no big deal, but the pregnancy helped show how little anyone (except a few vetters) knew about Palin before McCain tapped her as his running mate on Friday, and added yet another bizarre twist to the saga of Alaska's first family.

"They are now conscious that their daughter will have to address the great challenge of raising a child sooner than they might have hoped," McCain's policy director, Douglas Holtz-Eakin, told reporters at a Monday lunch sponsored by the Christian Science Monitor. "They're being supportive of her and the man that she will marry. And they've asked that we respect her privacy, and out of respect to that request, I think that's all that we should say."

Delegates -- some of whom hadn't heard about the story by Monday afternoon -- said it was basically a private matter. "I don't think that has any effect on [the race]," said Colorado Republican Party chairman Dick Wadhams, who worked as a political consultant for Senate candidates John Thune and George Allen. "I think people will say any family can face that." A couple from Oklahoma, one a delegate and one an alternate to the convention, said they'd dealt with similar dilemmas in their own family. "Been there, done that," said Betty Kiene, 51, an auditor from Piedmont, Okla. "And you know what? Her kids aren't running, and the kids shouldn't be in the public eye." Her husband, Thomas, said the story made him like Palin even more: "She's pro-life, and she stands by those principles even with her daughter." A Connecticut delegate, Santa Mendoza, a lawyer from New London, said she could hardly hold the situation against Palin. "Have you ever known a 17-year-old girl who would do what you told her?"

In private, though, McCain aides were furious that a Daily Kos post had forced the story into the public, as posters on the liberal blog spent the weekend speculating that Bristol was actually the mother of Palin's 4-month-old son, Trig. (The campaign apparently released the statement from Palin and her husband, Todd, confirming the pregnancy in order to rebut that theory.) A senior aide to the campaign told Salon McCain knew Bristol was pregnant, and that Palin had told the people who vetted her for the job. But the campaign hoped the family might get a little more privacy. "They're people who view their role in politics [as crossing] the line from mindless partisanship to deliberate cruelty to innocent people," the McCain advisor said of the Kossacks. "They deserve the public condemnation they'll receive."

Democrats weren't touching the pregnancy story. Obama said he'd fire anyone found to be spreading the rumors that Bristol Palin, not Sarah Palin, was Trig's mother. "I would strongly urge people to back off these kinds of stories. You know my mother had me when she was 18, and how a family deals with issues and, you know, teenage children, that shouldn't be the topic of our politics," he told reporters.

Theoretically, the hurricane wasn't part of anyone's politics either Monday night, but if you believe that, perhaps you'd be interested in some nice bridges (to nowhere) for sale in Alaska? McCain's campaign manager, Rick Davis, set the tone for the day with a conference call that was practically an orgy of self-congratulation for the restraint and compassion the campaign was showing. An emergency response center was opening up near the convention hall. Text messages were going out to delegates telling them how to donate to relief efforts. Little credentials were being printed up with the slogan "Country First" on them and contact information for state-based charities in Gustav's path on the back.

That last one was really the tip-off that this was still politics, just a subtle form; "Country First" happens to be a slogan of McCain's that predates the hurricane, and it was already going to be a major theme of the convention. Likewise, the Web site his campaign set up for hurricane relief -- www.causegreater.com -- borrowed its name from a line in McCain's stump speeches. Sure, it was nice of the GOP to refrain from savaging Obama as millions fled from a killer storm. But let's not forget that Gustav was basically a do-over on Katrina, and the bumbling federal response that punctured Bush's aura of invulnerability.

And in the end, a Monday session that was originally only going to be about dry parliamentary procedure and adapting rules and regulations required by law for McCain to be nominated morphed into something else. First lady Laura Bush showed up toward the end of the afternoon to introduce a video message from the governors of Texas, Florida, Mississippi and Alabama -- most of the states affected by Gustav, and all Republicans. (She hoped everyone would understand if Louisiana's Bobby Jindal had other things to do.) She, too, reminded everyone that McCain and the GOP were putting politics aside. "When such events occur, we are reminded that first, we are all Americans -- and that our shared American ideals will always transcend political parties and partisanship," Bush said.

Finally, Cindy McCain walked onstage Monday night in a yellow dress that looked like a rain slicker, to something of a hero's welcome from the crowd. (Her daughters, Meghan and Bridget, and her mother-in-law, Roberta McCain, watched from the VIP box just off the floor.) "As John has been saying for the last several days," McCain said, "this is a time when we take off our Republican hats and put on our American hats." It's an odd line for a party that claims to have the market cornered on patriotism; if they're not Americans when they're being Republicans, what are they? But if things work the way the McCain campaign hopes, the public will forget that Obama asked the 5 million-plus people on his own campaign's e-mail list to send money to the Gulf (and redirected his Web site's donation pages to the Red Cross). And they'll hail this Monday night as just another example in a long career of nobility and heroism. And a strange election will keep getting stranger.