McCain: No, really, we vetted her!

As revelations about Sarah Palin mount, the McCain team scrambles to dispel reports that they didn't know what they were getting into. 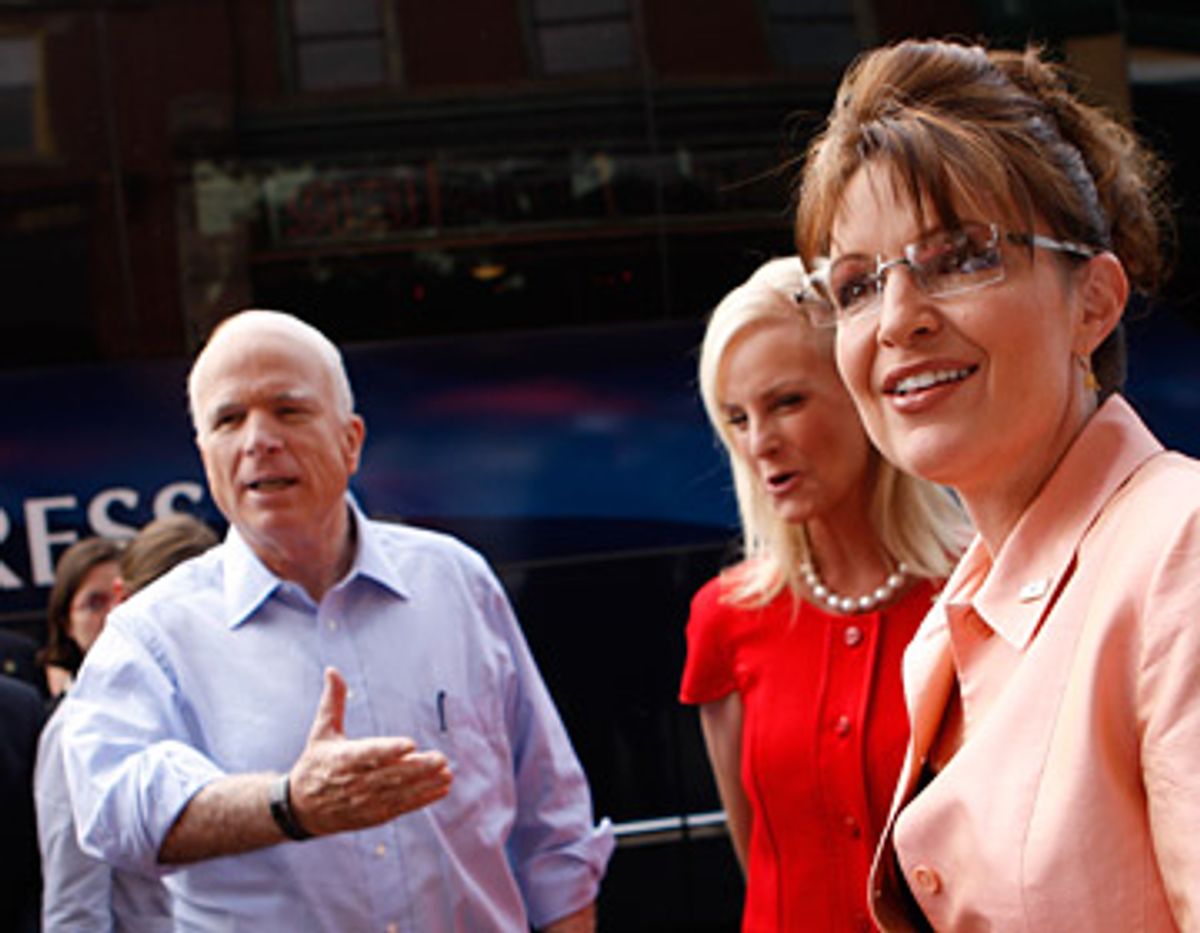 A few hours before dawn Tuesday, the Intrade predictions market started taking bets on a new proposition: that Sarah Palin would drop off the Republican ticket before the election. Speculators started buying a few hours later; by mid-afternoon, nearly 2,000 trades had been made by people hoping to make a quick buck off of the revelations about the Alaska governor that kept leaking out the day before. (Her husband had a DUI, she once flirted with a secessionist Alaska political party and there was also something or another about her daughter).

Those bets might, eventually pay off. But only if John McCain and his senior staff have a sudden change of heart. McCain's aides, suddenly finding themselves on the defensive about a V.P. pick they still think is a stroke of genius, are pushing back hard against the idea that Palin slipped through their selection process somehow, and against reports in the media that detail just who they didn't call when vetting her. (The campaign has even, apparently, decided to double down on Palin's popularity with the family values crowd; Levi Johnston, Bristol Palin's boyfriend and the father of the child she is expecting, reportedly will join the Palins at the convention.) "She's fully vetted," senior strategist Steve Schmidt insisted. McCain himself chimed in Tuesday from Philadelphia. "The vetting process was completely thorough, and I'm grateful for the results," he told reporters in response to shouted questions.

If you ask McCain's team, the skepticism about Palin's experience is totally unwarranted. "She's more qualified than Obama," senior advisor Mark Salter told Salon, citing her 13 years in elected office (including her time on the Wasilla, Alaska, city council). "He has no business being president." Campaign aides seem unwilling to drop the line that Palin's command of the Alaska National Guard gives her an important credential, even though it sometimes sounds a little silly coming from Republican loyalists. "She's run her own military," said Joseph LeBlanc, 82, a delegate from Mountain Home, Ark. "Alaska is the biggest land [area] state," said Betty Kiene, an alternate from Piedmont, Okla. "Her neighbors are Canada and Russia, which means she's dealt with international problems."

The McCain campaign sees Palin as more than tough enough to withstand the feeding frenzy here this week -- and in fact, they think it might help her. Schmidt said the more the media digs into the story of Bristol Palin's pregnancy, the less the public will respect the press (and the more voters will buy the McCain team's assertion that Barack Obama is getting a free pass from reporters). The campaign ratcheted that argument up Tuesday, canceling a McCain interview with CNN after the network's Campbell Brown bodyslammed campaign spokesman Tucker Bounds Monday night.

They've put veteran operatives from the Bush administration (and two Karl Rove-led Bush campaigns) in charge of getting Palin ready for prime time -- former White House speechwriter Matt Scully is writing her convention speech (and wrote the remarks she gave on Friday) and former Bush strategist Tucker Eskew is working with Palin on press strategy. Senior aides said the campaign also dispatched a team of consultants and lawyers to Alaska to basically take over Palin's political operation. The lawyers were, allegedly, there to help the communications people understand vetting documents so they could spin them. The McCain team denies they are the after-the-fact vetting team described in the media, but at the very least they must also be trying to figure out if any new surprises are in the Alaska pipeline.

So far, the McCain team says they saw all the questions about her coming. In conversations at the convention, McCain aides indicated the end of their months-long vice presidential search came quickly, but not necessarily in haste. By the time McCain had settled on Palin last Tuesday, she had already filled out a 70-question vetting form full of personal, "intrusive" questions. She'd turned over financial documents and (apparently, since the McCain campaign sent around her entire voter registration history on Tuesday) political ones, as well. (A Republican consultant who isn't working for McCain but is familiar with the questions two other V.P. finalists were asked told Salon it seems Palin went through exactly the same process.)

Palin flew down to McCain's Sedona, Ariz., cabin in secret on Wednesday and met for three or four hours with Schmidt and senior advisor Mark Salter, before meeting with McCain in private for an hour Thursday. Before McCain offered her the job, he went through the pros and cons of picking her with top aides.

But it does seem like most of the vetting focused on legal, not political, issues. The campaign called a New York Times story Tuesday that raised questions about the vetting "fiction." That story quoted Alaska Republicans saying the campaign never called around Palin's world to find anything out about her. "I started calling around and asking, and I have not been able to find one person that was called," former Alaska House Speaker Gail Phillips told the Times. McCain aides admit that only a very small number of close advisors knew who McCain was considering. They seem to have relied mostly on Palin's own answers to their questions; whether the campaign did much additional due diligence on her isn't entirely clear. (No one searched the archives of the Wasilla newspaper, which are available only on microfilm, because they worried that would tip people off that Palin was being considered.)

It's true that McCain -- or at least some people close to him -- wanted to go with a candidate who was, incidentally, already fully vetted, albeit by Al Gore's team eight years ago. Some of the McCain inner circle was set on Joe Lieberman until conservatives shot that idea down faster than Sarah Palin shooting a moose. But Palin seems to have appealed to McCain for some of the same reasons that he wanted Lieberman in the first place; her image as a combative reformer fits McCain's own self-image, and dodging a safe pick like Mitt Romney or Tim Pawlenty in favor of a little-known Alaskan is a move right out of the McCain mythology.

But that's the problem. So far, in fact, what's tripping McCain up about Palin isn't what he didn't know about her, it's what he did. Is it a good thing that, as a McCain aide told me, one of the reasons McCain likes her is that she has some of the same enemies he does in Alaska? The impulsive decision to run with Palin because she seemed like a kindred spirit is, indeed, the kind of thing that McCain used to do all the time, both during his 2000 campaign and during the dark days in 2007 when his campaign had imploded and he was running the whole thing on a wing and a prayer from his "Straight Talk Express" bus. It definitely isn't the kind of thing that helped him pull even with Obama in polls last month with a disciplined, focused campaign. And depending on who wins the race to define Palin, it may not be the kind of thing that convinces voters that McCain -- and not Obama -- ought to be the man to lead the country for the next four years.