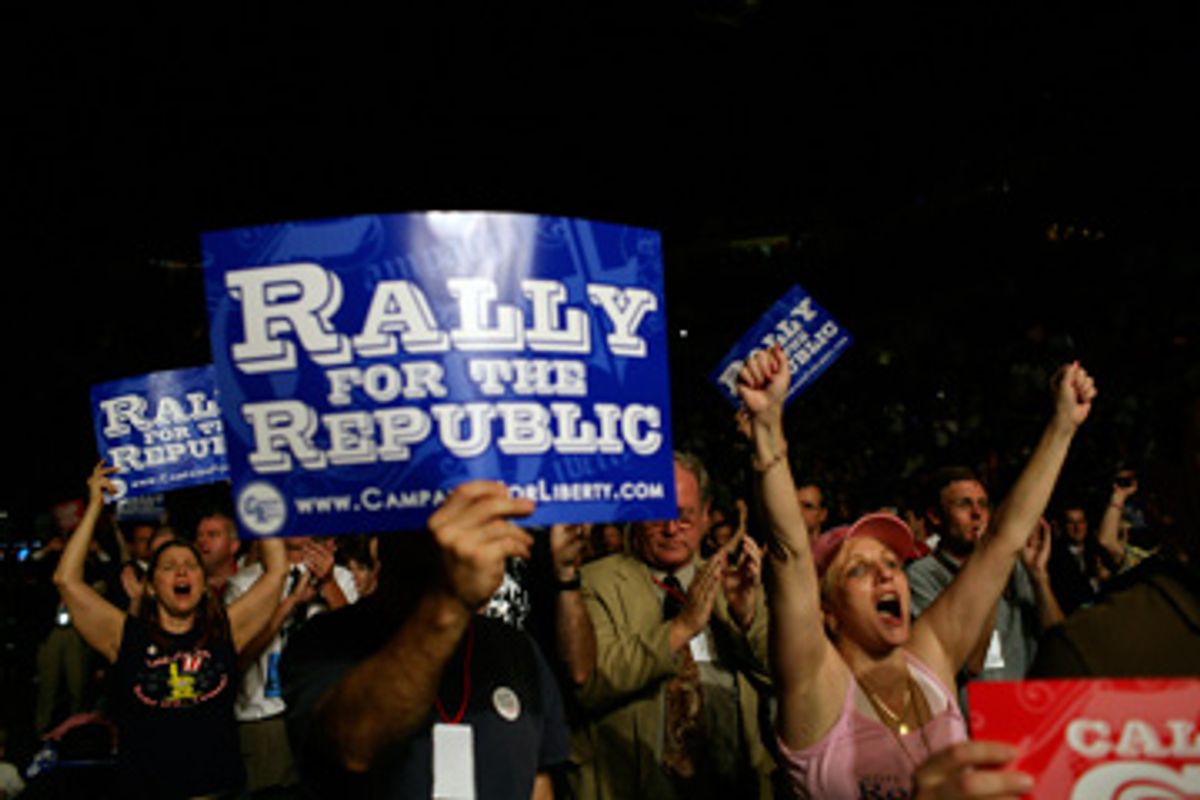 If you were in the Twin Cities on Tuesday, you could be forgiven for thinking that Republicans had to come to Minnesota to nominate Ron Paul instead of John McCain. At St. Paul's Xcel Center, where the real Republican convention is being held, a substantial number of seats remained empty. Next door in Minneapolis, however, a wildly enthusiastic crowd came close to filling the Target Center, capacity 10,000, where the Paul-ist faithful had gathered for their own quasi-convention to pay tribute to the Texas congressman, failed GOP presidential candidate and Libertarian hero.

The event, dubbed the "Rally for the Republic," was a daylong affair that marked the formal end of Paul's quixotic presidential run as well as, attendees hoped, the beginning of a Paul-sparked revolution in American government. The crowd defied the easy stereotypes that attached themselves to Paul's supporters during the Paul-mania of winter and spring -- the conspiracy-addled Web dweller, the Libertarian eccentric, the kid who only knows that Paul opposed the war. Sure, there was the occasional coonskin cap (and Daniel Boone-style frontier outfit), one man who appeared to be in Colonial dress and at least a couple of dreadlocked youths. The most striking thing about the people at the Target Center, however, was that they seemed so damn normal. But underneath the normality, and unbeknown to many in attendance, there lurked some of the dark undercurrents that have been present in the Paul movement all along.

Much of the energy that propelled Paul to the spotlight earlier this election cycle came from passionate neophytes. Many of those at the Target Center said they hadn't cared about politics before they first heard the Texas Republican speak. Some had come hundreds of miles just to be there -- like 23-year-old Tim Regnier and 21-year-old Nicole Wagner, who had driven seven hours from the Chicago suburbs. "We just wanted to show that the movement's not going to die," Regnier said. Justin Spyres, 27, said he "flew out from California just to be a part" of the rally. "I'm unemployed, I don't have any income," Spyres said, "but we made it work."

Others at the Target Center, however, have deeper roots in American politics, specifically its far-right fringe, and longer ties with the star of the show. For years, Paul has attracted support from right-wing radicals and even white supremacists, and he hasn't exactly run from that part of his fan base. Newbies like Regnier were on the floor, but some of the radicals were onstage, hidden in plain sight.

There was a furor earlier this year when the New Republic's Jamie Kirchick dug up some old newsletters put out under Paul's name that smacked of racism. (In some, African-Americans were called "animals." One issue, Kirchick noted, "ridiculed black activists who wanted to rename New York City after [Martin Luther] King, suggesting that 'Welfaria,' 'Zooville,' 'Rapetown,' 'Dirtburg,' and 'Lazyopolis' were better alternatives.") Onstage at the Paul rally on Tuesday was Lew Rockwell; credible evidence suggests Rockwell may have ghostwritten much of the controversial material in those newsletters. (Rockwell denies this.)

There, also, was Howard Phillips, a self-described "old friend" of Paul's, and one of the founders of, and a former presidential candidate for, the far-right Constitution Party. Phillips has long maintained ties to the Christian reconstructionist movement, and has advocated a "return to Godly, Biblically based constitutional government." His party's platform includes dark mentions of the "New World Order."

And there was a special guest, whose name was kept secret until he hit the stage: John McManus, president of the John Birch Society. The JBS is perhaps best known for having opposed fluoridation of drinking water as a communist plot; it was kicked out of the American political conversation decades ago after -- among other things -- its founder called Dwight Eisenhower "a dedicated conscious agent of the communist conspiracy." But at the Target Center, McManus was one of the stars of the day, and he was clearly enjoying himself, basking in the applause. He got a grateful response when he announced that Paul will headline JBS's 50th anniversary dinner this fall.

A good many of those in attendance had not yet been born when the JBS had its heyday, and a fair number of the people Salon spoke with afterward had never heard of it. A few, however, had become familiar with the group, even joined it, because of their association with the Paul campaign.

The mainstream, however, at least the conservative division, was well represented. Grover Norquist, president of Americans for Tax Reform and a prominent GOP activist, spoke. MSNBC's Tucker Carlson served as emcee. "I'm not endorsing anybody," Carlson told Salon, adding that there "are things I disagree with" about Paul's philosophy. He was there, he said, because they'd asked him to be and because he admires Paul for sticking up for personal liberties. He also praised the people who'd come to the Target Center. "I admire the fact that they don't get anything out of it -- nobody's going to be ambassador to Belgium for supporting Ron Paul."

"I don't like the thing we do in the media," said Carlson, "this dismissive thing -- 'Oh, they're just crazy.' And I do it too. That's a low impulse. I think if you're going to say that, you should be required to offer some proof."

Another semi-mainstream figure almost stole Paul's show. Former pro wrestler and Minnesota Gov. Jesse "The Body" Ventura was a clear crowd favorite -- a diversion into some 9/11 Truther rhetoric didn't hurt him -- and he got some attention for hinting at a presidential run, promising that if the U.S. "shows me that it's worth it, in 2012, we'll give them a race they'll never forget."

There were plenty of delegates from that other convention in attendance as well, most pledged to Paul but some to McCain. The GOP delegates with whom Salon spoke were universally more excited about Tuesday's event than they were about the rest of the week, and said their fellow GOP delegates had been supportive. "We agree on so much ... we're trying to build bridges," said David Fischer, an alternate Paul delegate from Iowa who described himself as a "lifelong Republican" who hadn't been inspired to become a delegate to the GOP convention until Paul's candidacy. Some of the GOP Paul delegates, like Fischer, said they'd vote for McCain in November, but others weren't sure.

Marc Lucca, a Paul supporter and delegate from Oregon who'd been a field director with Victory 2004, the Republican effort to reelect President Bush, said, "I would likely support McCain if he is the nominee," but added, "I would like to see John McCain not take my vote and the votes of millions of other conservatives for granted."

Thomas Kiene of Oklahoma, a reluctant McCain delegate -- he preferred Paul, he said, but his district went for McCain -- was less generous. He called the GOP convention itself a "railroaded show."

"I was over there yesterday and it made me sick," Kiene said. His vote is pledged to McCain, but he's not happy about it, and says he's considering not voting at all. "I'll be there. Maybe as an observer more than a participant. Whether I let my alternate cast my vote or not, I don't know."

At least one longtime Libertarian was excited to see the turnout, and to see the wide array of people and opinions the movement is now attracting, even if he doesn't agree with the philosophies of some of the groups represented. "It's a wide, weird tent," said Kerry Welsh of Redondo Beach, Calif., who says he's donated more than $100,000 to Paul and other Libertarians over the years. "All I can say is that freedom brings in a wide assortment of people ... Imagine what would happen if someone like Mike Huckabee or Mitt Romney held a rally like this now? Nobody would attend, because they don't stand for anything."