Yet again, the GOP launches brutal personality and cultural attacks on the Democratic candidate. Yet again, Democrats seem determined to allow it to do so. 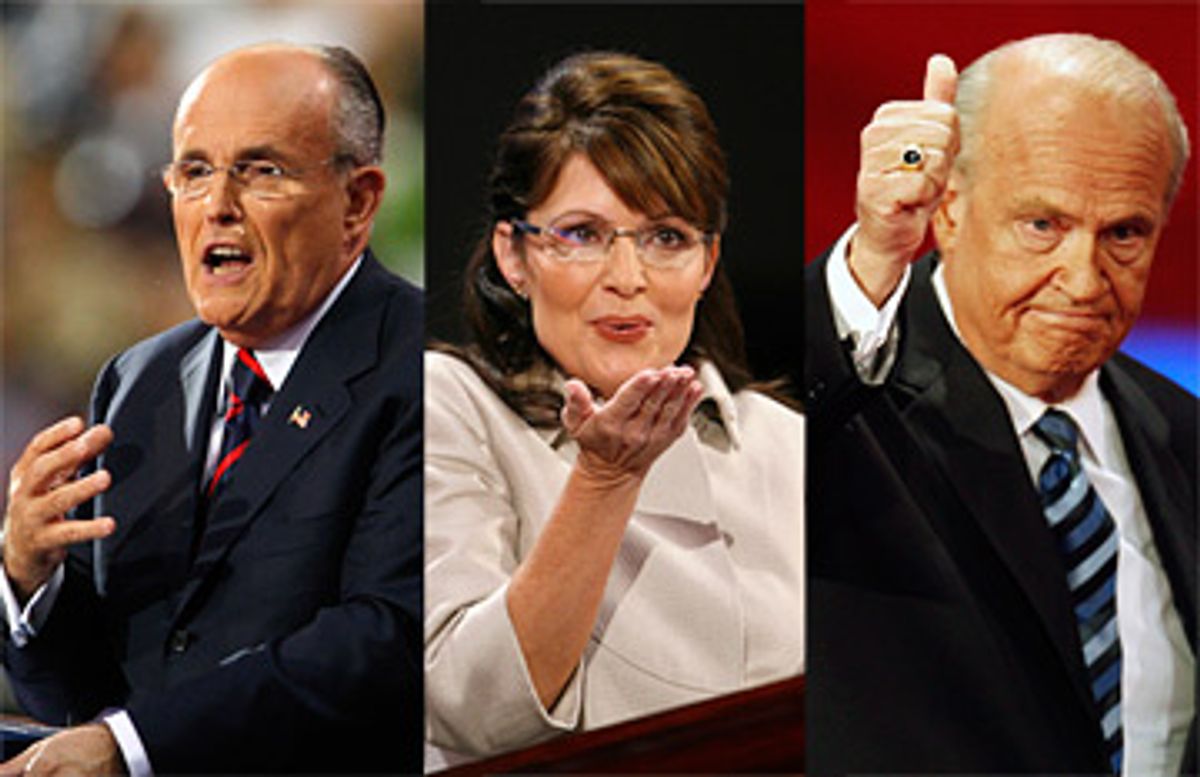 With last night's cheerfully vicious speeches from Rudy Giuliani and Sarah Palin, the Republicans did what they always do in order to win elections: they exploited raw cultural divides while mocking, belittling and demonizing Democratic leaders. Yet again, they delivered brutally effective and deeply personal blows to the Democratic presidential candidate grounded in the same manipulative and deceitful yet very potent themes they've been using for the last three decades.

Ever since Ronald Reagan's election, this is what the Republicans do every four years. They render issues irrelevant and convert campaigns into cultural wars and personality referenda. They converted our elections into tawdry reality shows long before networks realized their entertainment value. And every four years, Democrats seems shocked and paralyzed by all of this and desperately delude themselves into believing that mean-spirited "negativity" and nastiness will alienate voters, while the media swoons at the potency of these attacks.

The derisive attacks on Obama's character last night were exactly what Democrats decided -- yet again -- that they would studiously avoid at their own convention when discussing John McCain. On the third night of the DNC -- after Biden spoke but before Obama spoke the next night -- I wrote:


More politically damaging still is the absence of any truly stinging attacks on John McCain. Even Joe Biden's speech -- billed as the "attack dog" event -- almost completely avoided any criticisms of McCain the Person, who will emerge from the four days here as a Wonderful, Honorable, Courageous Man -- a friend to Democrats and Republicans alike -- who just happens to be wrong on some issues. The Republicans will spend the next four days mercilessly ripping Barack Obama's character to shreds, as they did to John Kerry in 2004. . . .

The GOP's attacks on Kerry in 2004 were mocking, scornful, derisive, demonizing and deeply personal -- in speech after speech -- and they were also highly effective. They weren't the slightest bit deterred by the fact that Kerry was a war hero who was wounded multiple times in Vietnam while George Bush and Dick Cheney. . . . weren't. Has there been anything remotely approaching those attacks on McCain by any of the prime-time Democratic speakers?

The GOP assaults on Barack Obama will be -- have already been -- even more vicious and personalized, which means by the end of their Convention next week, John McCain will be, by all accounts, an honor-bound, principled and courageous patriot (who, at worst, is wrong on some issues), while Barack Obama will be some vaguely foreign, weak, appeasing, super-ambitious, exotic, empty-headed, borderline un-American liberal extremist. Democrats seem to be banking on the fact that the agreement which most Americans have with their policy positions, along with widespread dissatisfaction with the current state of things, will outweigh the effects of this personality war -- a war which they, yet again, have allowed to be one-sided.

None of this is to say that the GOP attacks will enable them to win the election. It is quite possible that enough Americans this year are so alienated from the GOP brand that they are now largely immune from these kinds of substance-free personality assaults, that they won't be blinded by cultural tribalism and personality appeals into handing this political party an additional four years of power. But these tactics have worked in the past because cultural tribalism, resentment and alienation are very powerful influences in how people think -- in general, they're more powerful than rational assessments of policy positions or even one's self-interest -- and the Democrats' gamble that they can win this election without really engaging those issues, while allowing that war to be waged in a one-sided manner yet again, is a true gamble.

Even today, fresh off of watching Sarah Palin rip Barack Obama's face off using the most intense forms of derision and condescension, Joe Biden -- Obama's "attack dog" -- went on The Early Show and said he was "impressed" with Palin's speech:


MAGGIE RODRIGUEZ: How do you think your Republican counterpart did here last night?

SEN. BIDEN: Well, my plane was landing. I only caught the last two-thirds of the speech, but I was impressed. I think it was a skillfully delivered political speech with confidence and directness and so I think she did what she was supposed to do. I was impressed.

What Biden said was arguably wise (attacking Palin personally -- as opposed to McCain and/or Palin's ideology -- is a stupid strategy). Biden's remarks were also all true, as far as they went. Palin's speech -- indeed, the entire GOP Convention -- was almost entirely bereft of substance and "issues." But it is that way by design.

The Republicans are well aware that they can't possibly win the election if it is even partially decided based on issues. They need and intend to win despite the fact that Americans hate their positions on the issues, and to do that, they want to ensure that a majority of Americans love and respect the strong, honorable, principled, culturally familiar all-American mavericks John McCain and Sarah Palin (even if they don't agree with them on everything) while strongly disliking that wishy-washy, snooty, foreign, exotic, self-absorbed Eastern elitist Barack Obama (even if he says the right things on issues).

Democrats have clearly decided (yet again) to cede that lowly playing field to the GOP and are hoping (yet again) that those personality and cultural issues are not enough to outweigh the country's dislike of Republican policies. This year is indeed different -- dissatisfaction with the Government is higher than ever before, the GOP is as discredited as a party can be, and Obama is a more effective candidate than those who preceded him -- but the attacks last night were only the beginning, not the end. If John McCain remains -- even from the mouths of Democrats -- the Honored, Honorable, Principled, Heroic Maverick, the GOP chances will be as high as they can be.