McCain to Obama: Do as I say, not as I do

John McCain disapproves of contests of personality and style -- unless he thinks he can win them. 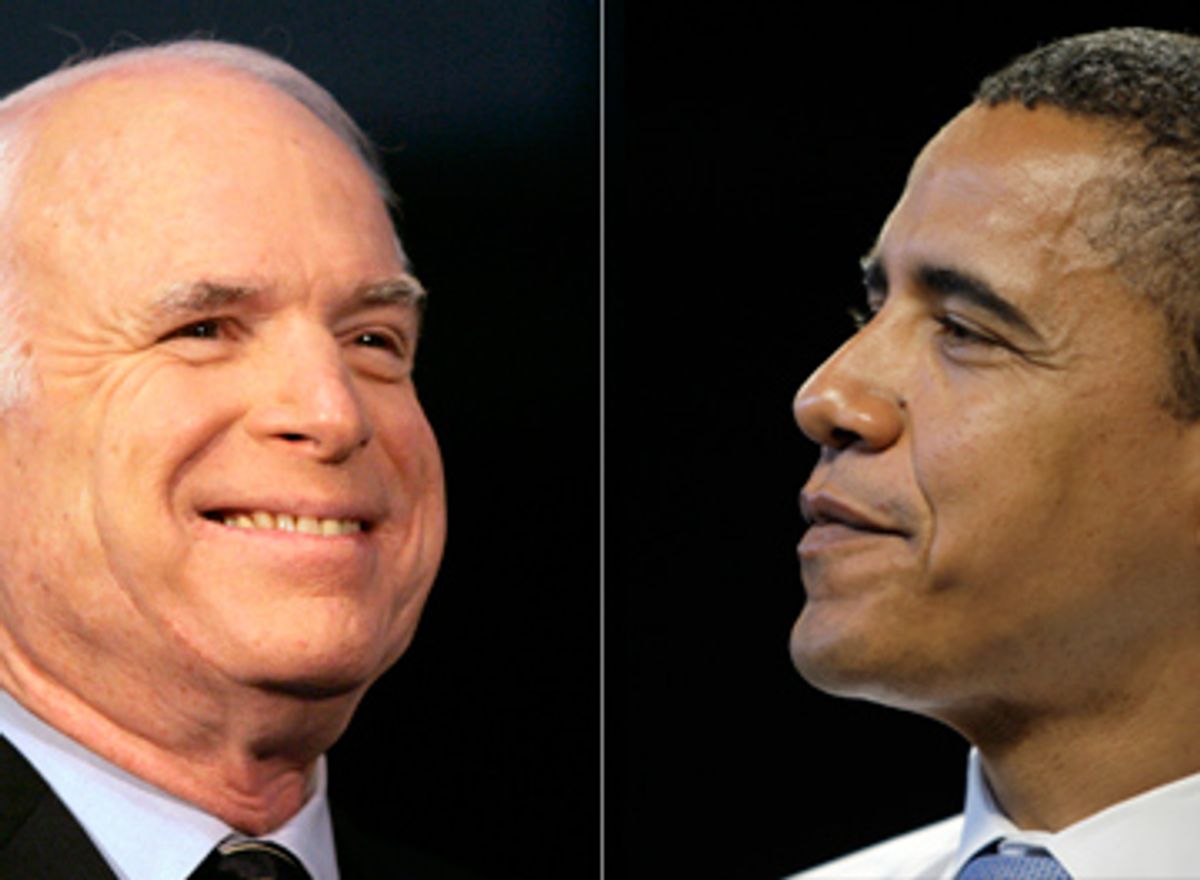 Over the past few months, you might have heard from John McCain and his campaign that Barack Obama has some serious character flaws. Namely, he's wildly popular. He delivers speeches well. He's running a campaign based on his own personal appeal. He didn't begin that campaign with a long political résumé.

Apparently none of that stuff bothers McCain if it's not Obama doing it. The Republican convention this week has been as character-driven, as wildly cheered and focused on a big speech by an inexperienced, charismatic young politician as anything you saw last week in Denver. McCain's running mate, Sarah Palin, even shares the cover of a celebrity magazine with Obama this week. When McCain walked onto the stage Wednesday night to greet her (in an echo of Obama's "surprise" appearance with Joe Biden a week before), she had just finished arguing that character -- and McCain's own personal virtue -- would be the determining factor in the election. It seems that what John McCain hates about Obama's campaign is exactly what he loves about his own.

The night that McCain won the Virginia primary back in February, his victory speech drew some attention for the sarcasm with which McCain threw Obama's slogans back in his face. But McCain's speechwriter and intellectual alter ego, Mark Salter, said later there was actually another line, mostly ignored in the text, that did a better job of summarizing how their side saw the election: "I do not seek the presidency on the presumption that I am blessed with such personal greatness that history has anointed me to save my country in its hour of need," McCain said that night. Obama, the McCain team felt, was basically telling voters there was something about him specifically that the country needed; McCain's candidacy, meanwhile, was based on his accomplishments and his experience, not some ineffable personal qualities. The same idea was what drove the ads comparing Obama to Paris Hilton and Britney Spears -- Obama was running on who he was, and he was famous just for being famous, not for anything he'd done.

This week in St. Paul that message seems to have been abandoned. On Wednesday, Mike Huckabee repurposed a convoluted anecdote from his own campaign about the sacrifices made by American military personnel, explaining that American school kids don't have to "earn" their school desks because veterans have already bled for them, and concluding (a little cryptically) that McCain's war service "helped me have a school desk." The night before, Fred Thompson made the case more explicitly. "His is the kind of character that civilizations from the beginning of our history have sought in their leaders," Thompson said, right after claiming that McCain's wartime imprisonment alone doesn't qualify him for the presidency (a line that got Wes Clark into trouble a few months ago). "Strength, courage, humility, wisdom, duty, honor. It's pretty clear there are two questions that we'll never have to ask ourselves: Who is this man? And can we trust this man with the presidency?"

The whole convention has been a celebration of McCain's honor and integrity -- there's been little focus on his record, hardly any on his plans for the country's future. Suddenly, character matters most. Just ask Rick Davis, McCain's campaign manager, who told the Washington Post this week that "this election is not about issues," but rather, "a composite view of what people take away from these candidates."

Personal qualities were, apparently, a large part of what drew McCain to pick Palin -- he liked her "Alaska maverick" ways, even if it turned out she hadn't always been consistent with them. It was as if McCain looked at her quirky background, unconventional family, short political résumé -- and said to voters, "You like Obama? Well, have I got an Obama for you!"

Palin, whose surprise appearance on the ticket has drawn a lot of the focus at the convention away from McCain anyway, seems to be making a special effort to embody all the Republican criticisms of Obama. Especially the one about how exciting speakers are somehow suspect. She packed the hall Wednesday night for a speech that fired up the base -- and then took potshots at Obama for doing the same thing. "We've all heard his dramatic speeches before devoted followers," she told her devoted followers in a dramatic speech. "When the cloud of rhetoric has passed, when the roar of the crowd fades away, when the stadium lights go out, and those Styrofoam Greek columns are hauled back to some studio lot -- what exactly is our opponent's plan?"

It took breathtaking, cynical nerve -- or a complete lack of self-awareness -- to deliver that line before a roaring crowd, in a sports arena, in front of a massive backdrop (just as made-for-TV as Obama's Greek columns). Just as it must take some nerve for Republicans to claim, with entirely straight faces, that Palin is far more qualified than Obama because she's the governor of the largest state, even if it's also the third-least-populated. Obama aides weren't quite sure what to make of the sudden turnaround. "Giving a good speech -- exciting a crowd of several thousand people in an arena and turning them loose on the electorate -- was a decided negative up until around 10:20-ish last night," Obama senior advisor Robert Gibbs told reporters Thursday at a lunch sponsored by the Christian Science Monitor. "And then when she did it, it became what you have to do to be a successful candidate."

Ask McCain's team, though, and in between boasting about how dynamic Palin is, they'll tell you they don't see any similarity between what they're doing and what they're attacking in the Obama campaign. "The contrast wasn't about personalities but about what each candidate has done in service to the country and what that tells you about what they would do as president," Salter told Salon.

McCain's own appeal was always rooted, to a large extent, in style, exactly what he criticizes about Obama. Style, not substance, was what drew Democrats and independents to his 2000 campaign. Even then he was a standard-issue conservative on many issues. And until GOP strategists decided to make the press their enemy this summer, McCain joked that reporters constituted a good chunk of his political base. Part of what bothers McCain about Obama seems to be that Obama's done a better job with McCain's shtick than McCain has. McCain apparently has decided to steal the act back.

With the conventions ending and the general election in full swing, McCain's theory of the election is clear. This isn't a battle over issues and ideas; it's a campaign about whose character you can trust. There's probably a reason for that -- polls show voters agree with Democrats on most of the issues, but Obama has had a tough time all year getting people to look past his background, name, skin color and short time on the national scene. No matter how much McCain derides Obama for turning the presidential race into a personality contest, it seems he's decided that's the only type of contest he himself can win.