McCain's veep choice is the reincarnation of George W. Bush, as channeled by Karl Rove. 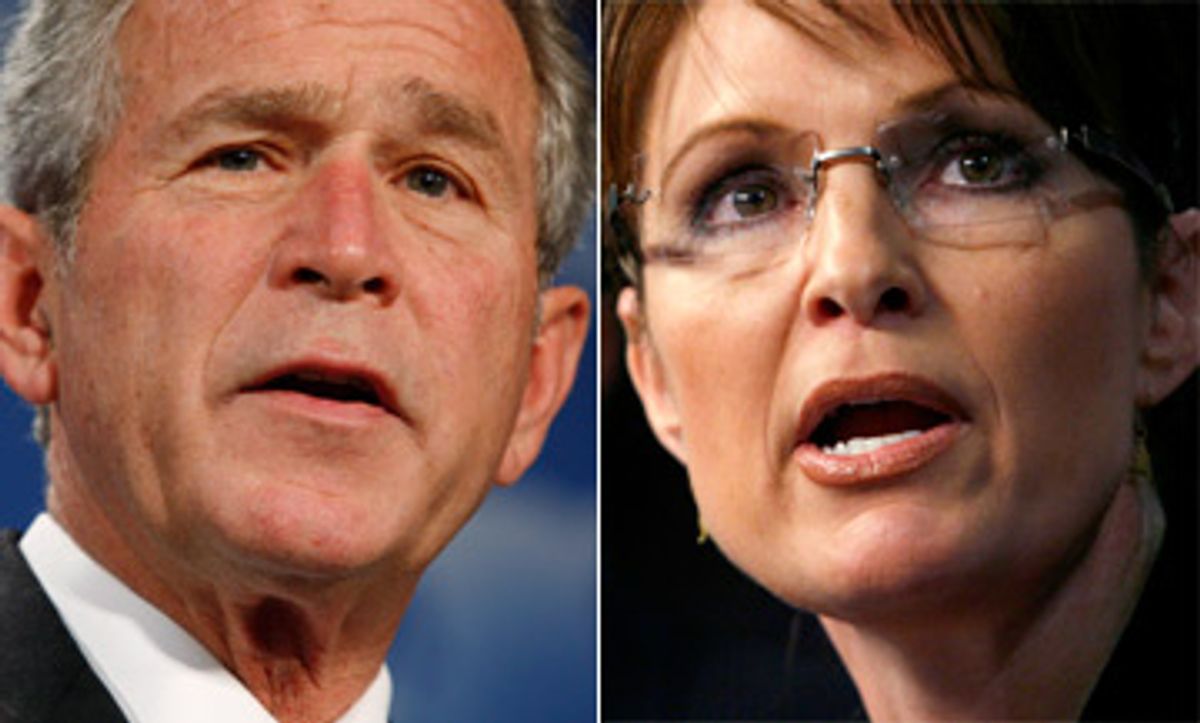 As the storm-shrunk Republican National Convention winds to a close, pundits have commented on the eerie absence of the man who, until Thursday evening, remains the party's nominal head: Other than his brief first-day message by satellite, our sitting president, George W. Bush, has been MIA from the St. Paul festivities, mentioned by few and eulogized by even fewer.

But Bush's ghost-at-the-feast status is hardly a sign that the Republicans have abandoned the recipe that won them consecutive terms in the Oval Office. Indeed, last night's official unveiling of Sarah Palin as their presumptive veep proved that the only change they're offering is savvier packaging. In Gov. Palin, the GOP has its new Bush, same as the old Bush, but more polished, more presentable, more user-friendly than the original ever was -- and, they hope, still fresh and unencumbered enough to run as a "maverick" against the legacy of Dubya 1.0's failures.

On the face of it, the duo seems as different as two individuals could be -- one, an Ivy-educated scion of a political dynasty, raised in wealth and privilege in the deep South, the other a defiantly blue-collar "hockey mom" born and bred in the Union's northernmost state -- but the deeper parallels are uncanny, in career arc, character and political positions, in strengths and flaws.

Both Bush and Palin hail from oil-rich Western expanses -- the second-largest and largest states in the nation, respectively -- whose size and rugged history encourage a particular kind of frontier sensibility: Stubborn, close-mouthed, self-deterministic and paradoxically capable of both hard-partying Saturdays and holy-roller Sundays. (And given that, it's hardly a surprise that both were wild and experimental in their youth, only to embrace deeply fundamentalist Christian convictions later in life.)

Both became governor of their states while still political neophytes, triumphing over veteran opponents despite slender résumés (six years as a part-time small-town mayor for Palin; a failed congressional campaign for Bush) and staggering odds against them. In their gubernatorial campaigns, they emphasized bold ideas and reform, even touting their lack of experience as an asset rather than a liability; while in state office, they became extraordinarily popular, thanks to deft populist instincts and immense personal magnetism, as well as an unusual ability to project an aura of moderation and post-partisanship ("I reached across the aisle"; "I'm a uniter, not a divider") even while engaged in viciously political behavior.

Part of what helps them preserve that firewall is the human cocoons with which they've surrounded themselves, tight circles of devoted long-term insiders whose primary virtue is unflagging loyalty, and who find themselves under furious attack should they, like Palin's ex-brother-in-law Mark Wooten, and a litany of former officials for Bush, dare to break ranks or spill secrets.

It's an environment that encourages a with-us-or-against-us, win-at-all-costs mentality, a mind-set that has been expressed in both their politics and their governance: More than any reforms she has brought to bear, it's Palin's streak of vindictiveness that has alienated her from Republican colleagues in Alaska, while Bush's reflexive belief that the world is the setting for a divine crusade of friends against enemies, good versus evil, is at the core of many of his administration's disastrous foreign policies. (Bush's simplistic reading of the global landscape seems to be echoed by Palin, who has referred to the Iraq war as a "task from God.")

Boy (and Girl) in the Bubble

If there's a common cause for Bush and Palin's less-than-complex worldview -- one that should disturb the security minded of both parties -- it's their profound disinterest in understanding or even experiencing other countries and cultures.

Prior to assuming office, Bush, despite having a father whose career included ambassador to China, director of the CIA and president of the United States, could recall only three times that he had ever gone overseas -- a trip to China with his dad in which he admittedly spent most of his time "trying to date Chinese women, unsuccessfully," and two ceremonial trips as governor, to the Middle East and Gambia, though he later amended this list to include a number of vacations and business trips he'd taken prior to holding public office.

Palin, meanwhile, applied for her first passport less than a year ago, in 2007 -- and then only to make a routine visit as governor to Alaska National Guardsmen stationed in Kuwait and Germany (with a refueling stopover in Ireland, a country that her spokespeople nonetheless included in her list of foreign visits).

And this, even more than Palin's wafer-thin résumé, is what makes her such a damning choice for McCain. Lack of foreign policy experience isn't a guarantee of foreign policy failure in our chief executive office -- Harry Truman, cited by Palin in her convention speech, performed ably abroad when he took up the presidency on FDR's passing, despite having spent much of his life as a haberdasher, farmer and local official. But Truman -- a Democrat -- was a thoughtful and voracious consumer of facts and opinions, particularly those related to foreign affairs, and his years as a U.S. senator gave him considerable opportunity to gather them on a global level prior to ascending to the executive -- the same opportunities afforded Sens. John McCain, Barack Obama and Joe Biden.

Palin, meanwhile, is notable for having told the press that she was so focused on her state that she "hadn't focused much on Iraq" -- despite the upcoming deployment to that country of her son, Track, an infantryman based in Fort Wainwright, Alaska. Her parochial mind-set -- Alaska First! Alaska Always! -- and willful ignorance regarding the greatest international issue facing our nation matches Dubya 1.0's famous dismissal of newspaper reading for lack of intellectual curiosity.

It's also worth noting another inartful aspect to Palin's Harry Truman shout-out: Truman became president when Roosevelt died suddenly of a massive cerebral hemorrhage, just 82 days into his final term in office. He was 63 years old -- almost a decade younger than McCain will be if he's elected.

What's ironic is that, according to Sidney Blumenthal, John McCain selected Palin as his running mate in an effort to distance himself from the president, and to undercut the Democratic line of attack that he was running as Bush's third term. Allegedly, says Blumenthal, he made the pick over the objections of both Bush and Karl Rove, now a key McCain advisor. But in doing so, he has selected the president's closest possible analogue, gender and geography aside. Which means that, in running from Bush, he essentially ran into Bush's arms.

And given the complete takeover of McCain's campaign by Rove and his disciples, it's hard not to think that the selection wasn't a fantastical piece of rope-a-dope on the part of master manipulator Rove, who by pushing Romney, terminating Lieberman and "begrudgingly" accepting Palin, now has the ingredients to reconcoct his Dubya success: a folksy, seemingly harmless outsider with rock-ribbed evangelical credentials, big-money connections and outsize ambitions, ready to be groomed to run for the Oval Office herself, or to stumble in by accident in the event of presidential tragedy.

In short, far from being angry at McCain's insubordination, Rove is undoubtedly rubbing his hands. Out with the old Bush, in with the new. Br'er Rove is in his laughing place; the Palin briar patch is where he wanted to be all along.