A pit bull in lipstick? 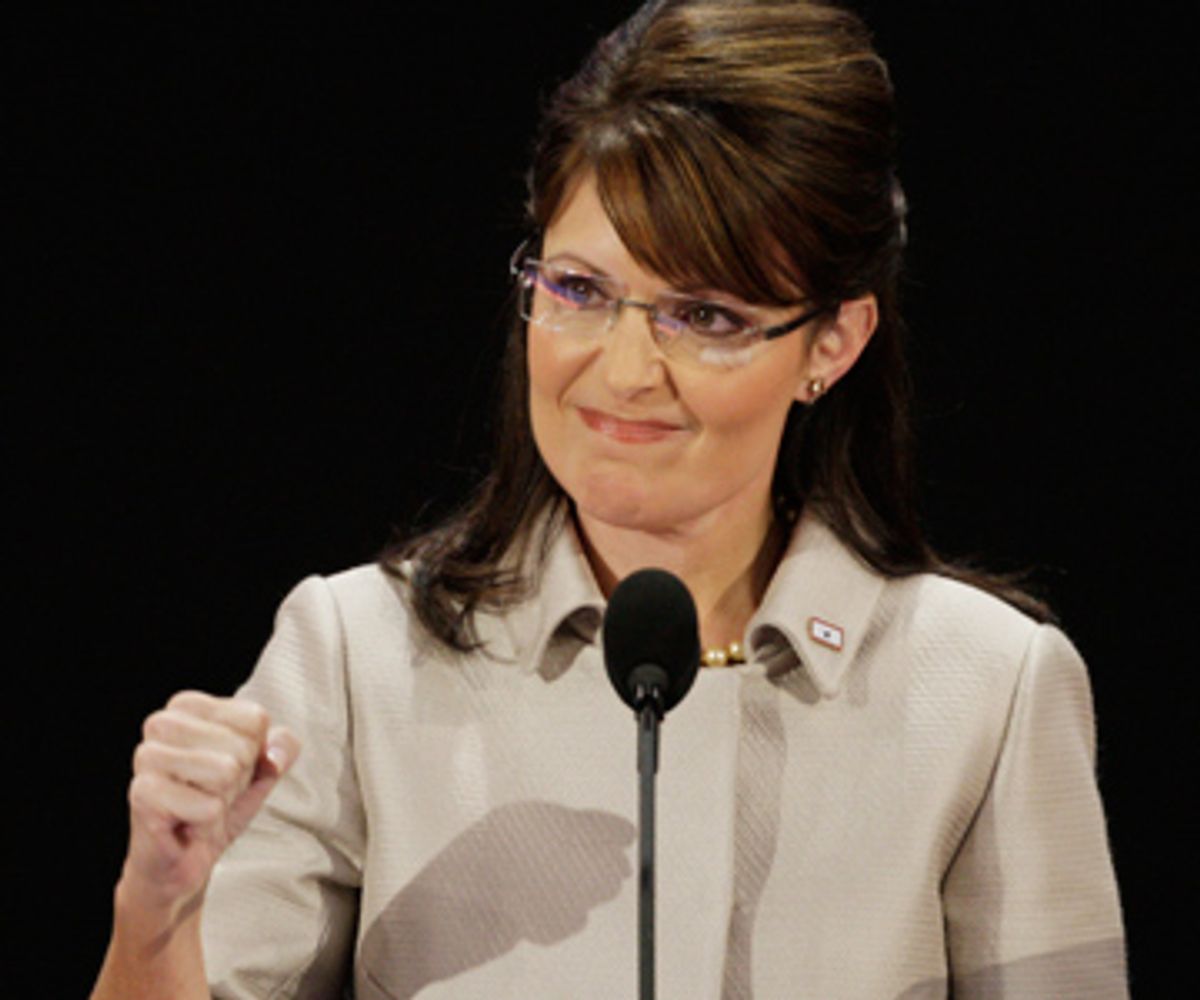 On the eve of GOP vice-presidential nominee Sarah Palin's heralded speech Wednesday night, the Republican Party declared war not on Barack Obama or Joe Biden, but on the media. After three days of wall-to-wall reporting on Palin's family troubles, her political flip-flops and her alleged extreme affiliations, from bigoted preachers to Alaska secessionists, Republicans went on the offensive against a comfortable old enemy, "the liberal media."

"I want to thank the elite media for doing something I didn't think could be done," former candidate Mike Huckabee told the GOP crowd to cheers, "and that is unifying the Republican Party in support of John McCain and Sarah Palin. The reporting of the past few days has been tackier than the costume changes at a Madonna concert." Speaking after Huckabee, a snarling Rudy Giuliani decried sexism.

By the time Palin took the stage, she no longer seemed like an Alaskan Annie Oakley, a gun-toting, hockey mom biker-gal; she'd become pioneer victim girl, Pauline tied to the train tracks by mean Democrats and the liberal media. But Palin shook off the victim mantle by coming out swinging, first blasting "the pollsters and the pundits" for writing off McCain last year, then tearing into Barack Obama with glee, teeth bared like a Rudy Giuliani in heels.

Palin oozed contempt and condescension for Obama, comparing her job as small-town mayor to being a community organizer, "except that you have actual responsibilities." She savaged "a candidate who lavishes praise on working people when they're listening, and then [says they] cling to their religion or guns when they're not listening. We prefer candidates who don't talk about us one way in Scranton, and another way in San Francisco." The presidential campaign, she sneered, "is not a journey of personal discovery," it's a battle where for Republicans "winning is survival, and defeat means death." She accused Obama of wanting to "reduce the strength of America in a dangerous world. Al-Qaida terrorists want to harm America, and he's worried someone won't read 'em their rights."

When Palin wasn't attacking Obama, she was praising McCain to the skies and talking up her family and her background. She'll never be able to cry sexism again after describing herself as a "hockey mom" and then asking: "You know the difference between a hockey mom and a pit bull? Lipstick." She talked about her family's "ups and downs," but didn't mention her daughter Bristol's pregnancy or impending marriage, even though her fiancé was sitting beside her daughter. She referred to her infant son Trig's "special needs," and promised "the families of special needs ... you will have a friend and advocate in the White House." Then she introduced her husband, Todd, as an Eskimo and a union member, and added: "We met in high school, and two decades and five children later, he's still my guy."

She made John McCain sound like her guy as well, describing him as "exactly the kind of man I want as commander in chief," with a little growl in her voice. "Our nominee doesn't run with the Washington herd. He's a leader who isn't looking for a fight, but sure isn't afraid of one, either."

For a political newcomer, Palin spent surprisingly little time establishing her own credentials. She ran through her political history and cast herself as a reformer, like McCain. When she defeated Republican Frank Murkowski as governor in 2006, she said, "We shook things up. We put the government of our state back on the side of the people. That luxury jet was over the top; I put it on eBay." She again held herself up, against much evidence, as an enemy of earmarks and the notorious Alaska "bridge to nowhere."

Perhaps predictably, she didn't take on any of the negative stories about her, ignoring not just her daughter's pregnancy but her own Troopergate, as well as the smaller revelations unrolling in the last few days: that she fired the police chief of Wasilla, and allegedly tried to ax the town librarian for not helping her ban books she found offensive. She didn't try to explain the many contradictions in her limited public record: She was for the infamous Alaska "Bridge to Nowhere" before she was against it. She was a supporter of disgraced Sen. Ted Stevens before she was an opponent. She has railed against pork but brought home the bacon for Wasilla and the state of Alaska.

And while she and the larger GOP leadership spent the day railing against the liberal media, some of the toughest media hits against Palin were scored not by liberals Wednesday, but by conservatives. Wall Street Journal columnist and former Reagan speechwriter/idolator Peggy Noonan and MSNBC analyst Mike Murphy, formerly of the McCain campaign, were caught on an open mic during a commercial break savaging the Palin pick. Noonan called it "political bullshit" and declared it wouldn't work. "It's over," she told Murphy. Murphy called it cynical -- even though both of them praised Palin on camera. And while Republicans have been blasting Daily Kos for printing rumors about Palin's last pregnancy and her teenage daughter, Bristol, a worse blow came from the National Review's Byron York, who Wednesday night passed on reporting by the National Enquirer that Palin herself had an affair with her husband Todd's business partner. (The McCain camp denied the story and threatened legal action against the Enquirer.)

Clearly, the media storm over Palin hasn't blown over, but on Wednesday night she proved she could not just take a punch, but throw one too. The crowd in St. Paul clearly loved Palin; it's hard to know how her sarcasm and sneering played to the wider television audience. But she proved she's nobody's victim, and Republicans would be wise to leave that narrative alone.