My son bullies me, insults his mother and once punched an old man in the nuts. I know it's probably just a phase. But what if it isn't? 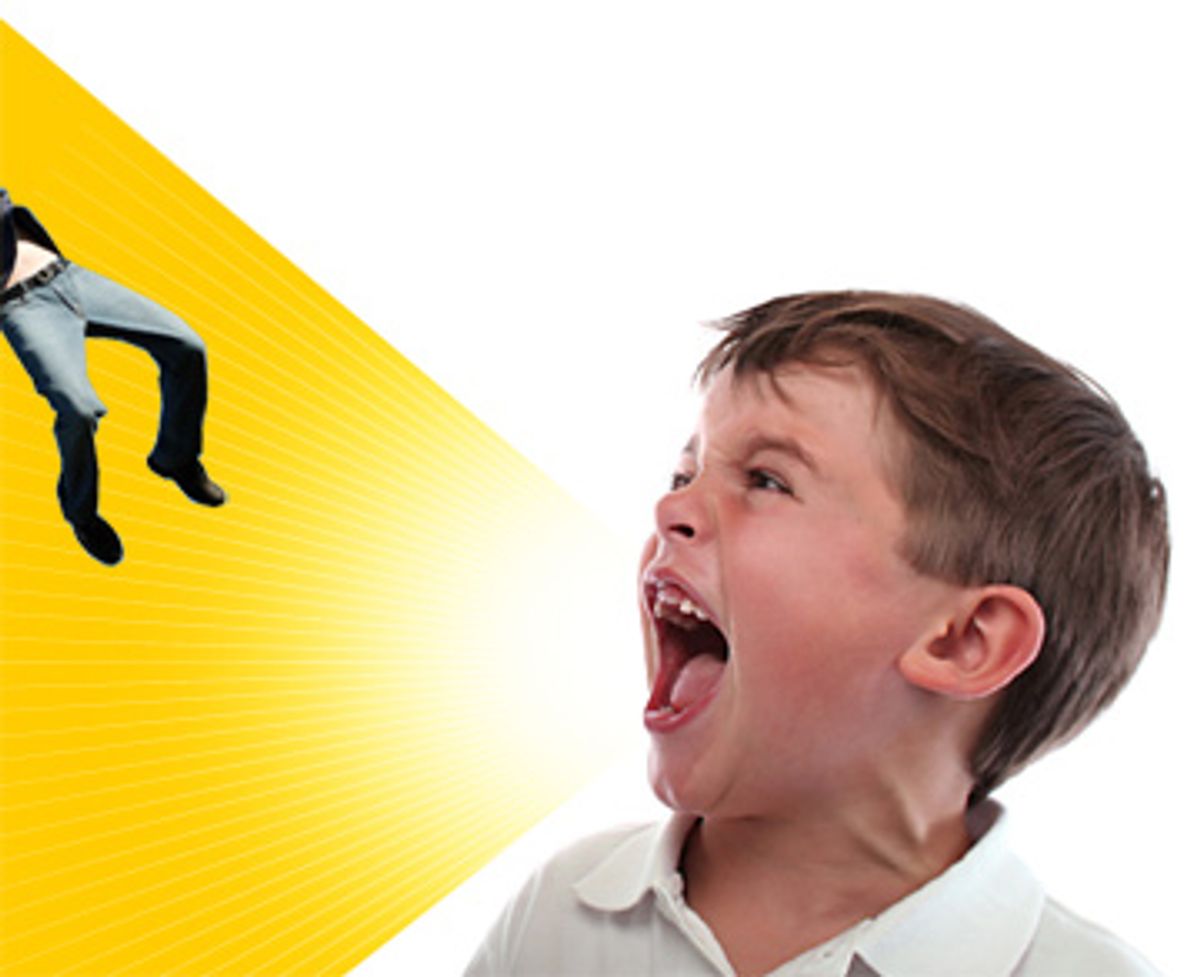 My son pooped on me this morning.

The pooping occurred at approximately 6 a.m. after the 2-year-old leaped into bed and suggested that he'd be most grateful if I got up, escorted him downstairs and turned on his favorite program, a quasi-educational cartoon about a bilingual girl and her pet monkey.

What he actually said was this: "Daddy, up! Dora show! Dora show now!"

On most days, "Dora the Explorer" is good for a solid half-hour of pre-breakfast calm. But not today. Today Oscar motioned to his midsection and said he "hurt."

Woefully misunderstanding the situation, I kissed him on the head and loosened his diaper. At which point he tore off the nappy and grabbed hold of my leg.

And then he pooped on my foot.

This may or may not have been an accident. Looking up at me in the messy slow-motion moments that followed, his expression could only be described as satisfied.

I have two things to say about this. First: It is truly remarkable how tolerant of bodily waste one becomes raising small children. Before I became a dad, the news that my everyday routine would include being defecated upon would have sent me diving for a home vasectomy kit. It is some measure of how far I've come (or how low I've sunk) that Oscar's outburst prompted little more than an exasperated moan as I backed away in search of industrial-grade cleaning supplies.

All of which is well and good -- there's no point getting overly worked up or grossed out over something so ubiquitous to family life that we parents simply call it "number two."

The second thing I have to say is harder to reckon with. Because the truth is this mishap was entirely in keeping with the general climate of aggression, crankiness, impatience and determined messiness that has come to characterize Oscar's personality over the last year or so. He demands. He resists. He screeches.

We've reached the point where I find myself seriously pondering the question: Is my kid a dick, or is he just 2?

Because you never know. As much as it goes against the current mode of progressive, project-management-style parenting, I take it for granted that some kids are trouble right out of the gate. They're the preschool gangsters and playground terrorists, flicking boogers and insults at those they've identified as too weak to fight back. Just as some kids are born sweet-tempered and naturally gentle, others arrive as thuggish as HMO claims adjusters.

But heaven forbid you ever speak this basic truth among parents. Acknowledging a child's dickishness is truly one of the last taboos of modern family life.

A child may have "behavioral issues" or "developmental challenges," but the basic character of a kid must never be called into question. It's always, "Cody must be tired," or "Dakota needs a snack" and never, "Wow, Taylor's kind of a prick."

The trouble, of course, is that it's exceedingly difficult to distinguish garden-variety assholery from the normal psychosis of toddlerhood.

Some naughtiness is entirely normal, I know. The pileup of parenting books on my bedside table assures me that kids between 13 and 36 months often experience "challenging developmental steps." They're testing limits, exploring their autonomy, learning to control their emotions.

One need look no further than the table of contents of the modern standard, "What to Expect: The Toddler Years," to get a quick and terrifying picture of how toddlers operate. Whole sections are devoted to "antisocial behavior," "caveperson language," "crankiness," "annoying habits picked up at play group," "jealousy," "biting," "wall art and other destructive drawing," "toothbrushing tantrums," "coat combat," "repeated 'no's'" and "impatience (now!)"

You'd never know it looking at him, but my son samples freely from the standard menu of misbehavior. In pictures he's doughy and sweet with a mop of blond hair, big blue eyes and an irresistible grin. He couldn't be cuter, really. Most of the time, especially when he's at play, in the bath or asleep, he is by any measure the most perfect creature ever to grace the earth. Then he whacks you on the head with a spoon, laughs like a banshee and tells his mother that her new earrings are ugly and stupid.

Much of this nastiness is standard-issue obstinacy, but it mostly takes the form of an obsession with control. Control and honor. It often feels like I'm living with an embittered and incontinent samurai who must enforce his will and save face at all costs. As such, he's ritualistic and rigid, demanding that I and not his mother unbuckle him from the minivan or that he receive one red and one purple Flintstones vitamin or that his diluted fruit juice go in the cup with the frog and not the one with the rabbit. Any deviation from the script is met with screams of protest and a flurry of little flailing fists.

We've tried discipline, distraction and even strict adherence to his demands, but the maddening fact is you never really know when he's going to go ballistic. At an airport security checkpoint recently, he blew up when we removed his shoes and then found a new, more extravagant pitch of tantrum when we tried to put them on again. Later at a Chinese restaurant, he dumped his noodles on the floor and then ran among the tables, licking the tops of the Hoisin sauce containers. At a family barbecue last week, he greeted an elderly relative with a swift punch to the nuts (mercifully, he aimed left).

I wish I could say I take all this in stride, but the fact is it bothers me more than I can say. I've heard people without kids complain that parents have a blind spot when it comes to their own kids, that otherwise reasonable adults are only too happy to gush over the preciousness of their progeny while their little darlings run riot like English football hooligans.

I seem to have the opposite problem; instead of glossing over my son's misdeeds (or, say, chalking them up to standard-issue tomfoolery), I latch on to them as terribly important signifiers of my kid's true identity. Far more troubling than the chaos or general untidiness of parenthood is the ongoing agony of distinguishing passing phases from the first signs of what sort of person your child is and will forevermore be.

Never mind that his days are spent gnawing on blocks and smearing mucus across his cheek. Somehow, I can't help feeling that he came in fully loaded, that his identity is complete and while he may get better at sharing his toys and using the potty, this is pretty much it. This is him. Behold my son, the dick.

No wonder so few parents are willing to acknowledge their own kids' misbehavior. Doing so not only insults your offspring, it inevitably leads to reflection. For if my kid is a red-hot pig, what does that make me?

And the truth is I'm very familiar indeed with many of the despicable aspects of my 2-year-old. I too am often overwhelmed by a desire to kick and scream and punch creepy old strangers in the nuts. Like my son, I'm often irrational, hate being told what to do and cranky when sleep-deprived. But, really, who isn't? Aren't we all, on some deep and rarely acknowledged level, temperamental toddlers? We're just better at hiding and managing it, thanks to helpful crutches like cocktails, reality TV and cardio boxing classes.

For now all I can hope is that my son finds some crutches sooner rather than later. He just turned 3, actually, graduating out of "terrible twos" and into a period rumored to be less traumatic and tumultuous. My two oldest kids are 6 and 8, and I like to think they've never been anything less than the sweet and mostly respectful darlings they are today. If I'm being entirely honest, however, I'm pretty sure I could recall a horror story or three.

None of which lessens today's trauma. Developmental misbehavior may be a normal part of growing up, but pooping on your dad? That's just wrong.

Christopher Noxon is a Los Angeles-based writer and contributor to the New York Times, the Los Angeles Times and Playboy. An archive of his stories is available here.