Ed Harris talks about directing Viggo Mortensen in his new western, "Appaloosa," and how men communicate without spilling their guts. 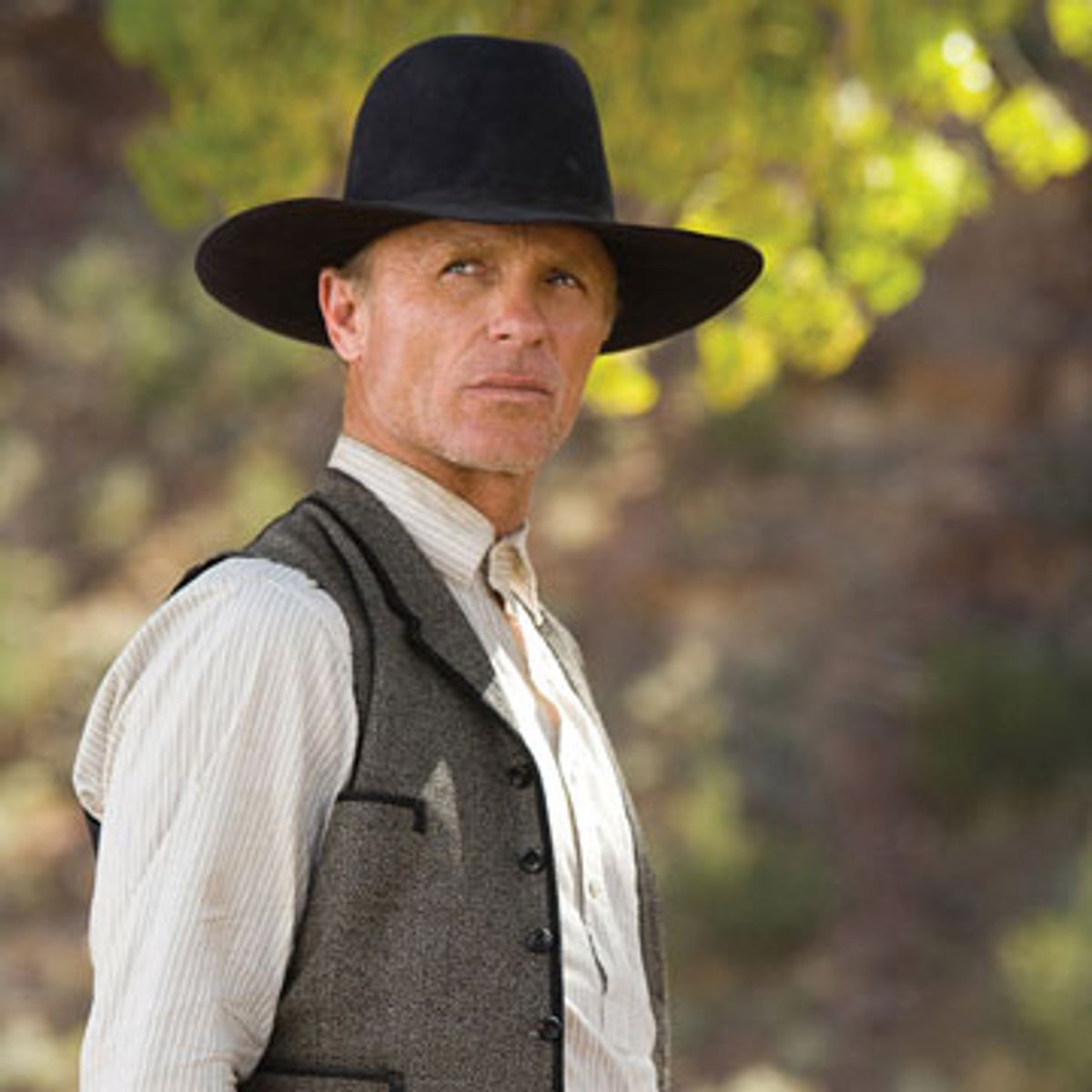 I lost my battle to make Ed Harris laugh. But he made me laugh, which is maybe more important anyway. The notoriously serious-minded actor and director -- whose new movie, "Appaloosa," played the Toronto Film Festival this past weekend and will open on Sept. 17 -- was closing in on the end of a long day of press interviews when my turn came to speak with him. I said I knew it was hard work to talk to journalists all day, to which he replied that he's happy to do what he can to support the movie. "And," he added, "you seem like a nice person." "Just wait," I said. He didn't even crack a smile.

No matter. There's been a mini-resurgence in western films recently, but it's still not a genre many filmmakers are eager to take on, perhaps partly because westerns aren't an easy sell with contemporary audiences. But Harris seems to have so enjoyed the process of making "Appaloosa" -- it's the second film he's directed, the first being the 2000 "Pollock" -- that maybe, just maybe, his wry, low-key enthusiasm will prove infectious. Once you meet Harris, and spend a bit of time listening to his soft-spoken, easy drawl, you can see that "Appaloosa" -- which was based on the novel by Robert Parker -- is exactly the kind of western he would make.

Harris and Viggo Mortensen costar as Virgil Cole and Everett Hitch, guns for hire and longtime pals who show up in a New Mexico town, circa 1880, that's being terrorized by a nasty local rancher, Randall Bragg (Jeremy Irons). Virgil and Everett are hired by the town muckety-mucks to deal with Bragg, which they seem perfectly well equipped to do: They're a solid, efficient team, friends who are as comfortable together as an old married couple. (In conversation, when Virgil can't come up with the word he wants, Everett steps in to supply it, like a personal thesaurus.) Then a widowed schoolmarm type -- in actuality, she's an organist -- named Ally French (Renée Zellweger) pops into town and proceeds to charm the pants, quite literally, off Virgil, and their courtship threatens to drive a wedge between the two men.

"Appaloosa" is a low-key picture, a loose ramble dabbed here and there with wry humor, which seems to suit Harris' style. Here, he talks about the pleasures of working in a genre that has somewhat gone out of fashion, and explains that it all began when he picked up a book that had "a kinda cool cover." (Listen to my interview with Harris here.)

Your movie strikes me as a little bit more Howard Hawks than John Ford, because Ford was into the stoic, principled guys, and Hawks had an affinity for the misfits, the oddballs. Does that make sense to you?

I've seen a lot of those things, and I looked at a lot of things. I looked at "My Darling Clementine" again, and "The Man Who Shot Liberty Valance," and "Red River" and a bunch of other things. But I don't really know how to answer you. I know I wanted to keep it simple visually, and I wanted to have as few cuts as possible. Just really keep things wide, where I could, and still tell this story about these people, in this landscape, in this town. In terms of the actual theory or philosophy, the intellectual penetration of the American western and the mythology of it, my brain doesn't work that way, you know what I'm saying?

Well, you're also adapting a novel.

Yeah, which I'm being true to. Which is really the guiding thing. I'm just trying to tell this story as well as I can.

Let's talk a little about the landscape, because that's so important in a western. You shot the picture on location in New Mexico. Tell me about how you worked with your D.P., Dean Semler, and what kind of relationship you guys had.

We had a really good relationship, and we spent a lot of time trucking out to these locations, particularly the ones that weren't in the town. While we were scouting locations, we were looking for some pretty specific geographic necessities. You had to find these places, and you're standing up there with Dean and talking about how to shoot it: "Well, the sun's going to be coming up this way." You have to draw it out.

It's fun. Plus you're out in this beautiful country. And it gets kind of hysterical because you're out in this magnificent land and you're looking for something in particular. And you might be seeing something really beautiful, and you're saying, "That's no good. That won't work." And you don't really see it for what it is, because it's not what you're looking for. [Laughs.]

There's been a little bit of a resurgence in westerns over the past few years, with "The Assassination of Jesse James by the Coward Robert Ford" and the remake of "3:10 to Yuma." But it's not a genre that a lot of filmmakers are currently working in.

I love westerns, and I would have been in a lot more of them had they been making more of them. I like the genre very much. But it was really this: I bought this book "Appaloosa" because it had a kinda cool cover, and I knew Parker was pretty good, an easy read, but also a decent, good writer. I said, "That doesn't look like a Spenser mystery. Let's check it out."

So I started reading it, and read a couple scenes between these two guys, my character and Viggo's, and it just tickled me. I couldn't believe it -- it just seemed really, like, fun. And I was going, "God, this would be really fun to do."

My understanding is that you gave the book to Viggo Mortensen to read. What made you think he'd respond to it?

I just had a feeling. I had only worked with Viggo for a couple weeks on "A History of Violence." But I really liked him, and we got along pretty well. He's a very private guy, he's very generous of spirit, but he's not going to become somebody's best friend overnight. Which I totally respect, and he'd probably respect that about me. But I just had a feeling that he might get it. And I thought we could pull it off; I thought that with his nature and mine, the two of us and the way he works, we could create this history between these guys and have it feel appropriate. And he did respond to it, which I'm really glad of. I'm not sure what I would have done if he hadn't.

It depends who gives it to you! But anyway, he was kind enough to read it and he liked it.

I would think two actors who are private people could really bring something to these characters.

That's what I mean. I don't need to talk to Viggo about my feelings intimately. He's not interested in that, and I don't expect him to do that with me. But we can also be very honest with each other. And if there's something that's bugging us, we can talk about it. I don't really see Viggo unless I'm working with him. It's not like we have a social life together. Plus he's never home anyway; the guy is always so damn busy doing stuff. [Laughs.] He's incredibly busy.

Anyway, yes, that sense of being a private person is perfect for these guys. As kind of intimate as they are -- they spend a lot of time together, and they talk, but don't share their deepest feelings -- it's not about that. It's about relying on each other and feeling comfortable with each other.

Do you think westerns offer any specific opportunities for contemporary actors? I know Jeremy Irons had never been in a western.

He was really excited about being in a western. At least for these guys from my generation, you grew up watching them. You admired the heroes of the western films: John Wayne, Henry Fonda, Gary Cooper, Jimmy Stewart -- and then you get into the Peckinpah years. And there's Clint.

Anyway, all these guys who worked on it were really happy to do it. Like Lance [Henriksen], who plays Ring. I hadn't seen Lance in a while, but he was the only guy I wanted to play Ring. I knew him from "The Right Stuff" -- we kind of kept in touch. I love Lance; he's really cool. He's got that great voice, you know.

Yeah, every day out there, you're in this western town, you've got your horse, you've got your six-shooter, your hat, your marshal badge, and you're walking down Main Street. If you're not having a good time, there's something wrong. It was fun, it really was.