How Democrats are fighting back against Sarah Palin

The Obama campaign is working the press, avoiding a full-scale assault, and waiting for Palin-mania to subside. But is that a smart strategy? 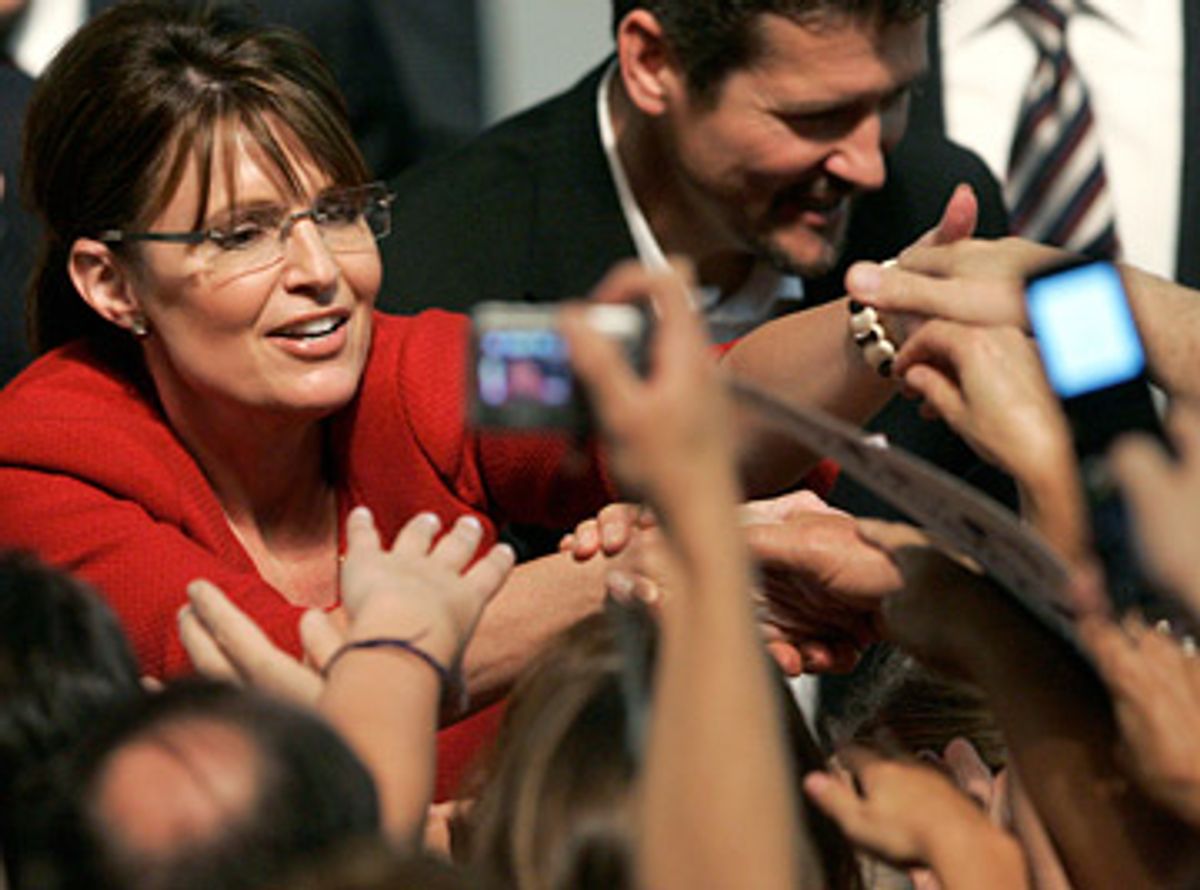 With the conventions over and the general election in full swing, voters around the country are really starting to focus on November and figure out who they want in the White House for the next four years: Barack Obama or Sarah Palin.

Or at least, that's the impression you might get from the way Palin has dominated political news since John McCain picked her as his running mate a week and a half ago. Palin has given McCain a bump in the polls, helped consolidate the Republican base behind the ticket and drawn more media attention to the GOP campaign than at any other time this year. McCain's drawing bigger crowds, and the political map is looking more and more like the old one from 2004 and 2000 now that Palin is on board.

One might therefore expect that Democrats would be in the process of preparing a devastating attack on Palin. After all, they learned from the failures of the Kerry campaign that the best defense is a good offense, and that defining your opponent is half the battle. So far, though, Palin's arrival doesn't seem to have led anyone in Chicago -- home of Obama's campaign headquarters -- or Washington to tear up the battle plan for the fall (though Obama aides wouldn't talk about their Palin strategy). Obama threw a quick ad on TV challenging Palin's image as a maverick, but for the most part, the response in Obamaland to the debut of Palin has been to wait, let the press dig up dirt on her (and circulate the dirt when they do) and focus attention back on McCain. Dealing with Palin is politically tricky for now, in part because she's so unknown. Strategists aren't sure how much the movement in her direction is because she's new and interesting, and how much of it will last once voters learn more about her. There's also some risk of a backlash in launching an all-out frontal assault on a mother of five who's not even on the top of the ticket.

But if Palin continues to be a phenomenon who can swing undecided voters into McCain's column simply by reaching out to cultural touchstones -- regardless of her position on issues --Democrats will surely ask themselves why they didn't go nuclear on her when they still had the chance. For now, though, Democratic consultants and aides told Salon they don't expect Palin to have the same impact on the race all fall as she has this week. Their attitude, in other words, is one that might have Democratic partisans tearing out their hair -- wait and see. Push back a little, but mostly, cross your fingers and hope for the bounce to deflate.

"The general strategy -- the best strategy -- is ultimately, this is a race between Obama and McCain," said one Democrat working on the fall campaign, who asked to remain anonymous to speak more openly about strategy. "Taking her [on] head on and kind of making the election about her -- for even a short period of time -- that, I don't think makes a whole lot of sense." Other Democrats agreed. "Vice-presidential selection is important, and certainly can produce interest and attention to a ticket -- either positive or negative -- but in the end I don't think it really makes a lot of difference to the voting in November," said Democratic consultant Tad Devine, who ought to know -- he managed Lloyd Bentsen's vice presidential campaign for Michael Dukakis, who went on to lose in a landslide in 1988. "It would be a big mistake to spend too much time dealing with her from the Democratic perspective."

That's because voters seem to like Palin far more than they like McCain, if recent polls are any indication. Once she joined the ticket, McCain moved ahead of Obama among white women, picked up independents and extended his lead among white men. Palin is getting people who otherwise weren't planning to vote for McCain to come over to his side, because they liked her convention speech or find her fascinating. While the window for defining Palin is open now, she's so much more popular than McCain that Democrats don't want to spend too much time talking about her. The attention on Palin is "certainly not helpful" to Obama, Democratic pollster Mark Mellman said. "She's a lot more exciting and a lot more interesting to a lot more people than [McCain] is. The most positive thing that people can say about him these days is that he picked her. [But] people are of two minds about her. On the one hand, they like her. On the other hand, they think she's not up to the job of being president."

So most of Obama's newest ads are about the economy. "McCain's policies seem hand-in-glove with President Bush," one new ad running in Pennsylvania -- where Palin's "hockey mom" image could help McCain -- says. "It's George Bush economics, and we can't afford more of the same." The only ad to date that mentions Palin specifically, however, does accuse her of lying, and casts doubt on her "maverick" image. "Sarah Palin's no maverick either," says the announcer. "She was for the Bridge to Nowhere before she was against it. Politicians lying about their records? You don't call that maverick ... you call it more of the same."

Obama picked up the same theme on Tuesday in a press conference in Riverside, Ohio. "What we're going to have to do is to see how things settle out over the next few weeks when people start examining who's actually going to deliver on the issues that people care about," he said. "You know, who's got an education plan that is going to improve the prospects for our children? Who's got a healthcare plan that is going to help a whole bunch of women out there who don't have health insurance? Who is better equipped to change the economy so that the average person who is working hard feels like they can get ahead and see their incomes rise?"

Still, behind the scenes, both Obama's campaign and the Democratic National Committee have been aggressive in pointing out news stories about Palin's record as Alaska governor -- or about her alarming tendency to lie about it. Obama's aides and allies don't want to let the McCain camp's version of who Palin is seep into the public consciousness unhindered. (In that version, Palin is a maverick reformer who bucked Republicans in Juneau, and by picking her, McCain proved his own credentials as ... yes, you guessed it, a maverick reformer who bucked Republicans in Washington.) On Tuesday alone, more than two dozen e-mails about Palin from the DNC or the Obama campaign landed in my in box, highlighting everything from her habit of taking a per diem for sleeping in her own home to the flood of stories poking holes in her claim she stopped the "Bridge to Nowhere" in Alaska. Late in the day, the DNC launched a Web site comparing Palin to Dick Cheney.

"They thought they could create this mythology around her that confirmed everything that McCain would like the American people to think is righteous about him," the Democratic strategist said. "It is important to make sure that that mythology, that narrative doesn't take hold with independent, swing, moderate voters, those are still undecided." If, instead, the coverage of Palin makes her seem like she's exaggerating -- or worse, just making up -- her maverick past, Democrats would use that to link McCain to President Bush once again. "If we're going to make this campaign about 'more of the same' versus 'the change you can believe in,' part of the more of the same that the American public is tired of is being lied to." But changing the narrative could require more than just pushing stories to the press, unless the media gets more aggressive toward Palin -- it might not work without TV ads or stump speeches behind it.

Attacking Palin directly could carry another pitfall for Obama (and running mate Joe Biden), besides taking the focus off McCain -- creating sympathy for her. Republicans have tried to scare Democrats away from attacking Palin by declaring almost every criticism of her record to be rooted in sexism. "Traditionally, you wouldn't really go after a vice-presidential candidate, and because she's a woman and because of who she is, I can see it being a little bit fraught with danger," said Democratic pollster Anna Greenberg, who conducted focus groups on Palin's convention speech with women voters in Las Vegas last week. Whether anyone buys the RNC's new role as self-appointed guardian of feminism remains to be seen, but sure enough, on Tuesday, the Republican National Committee went after Biden for saying Palin's policies would represent a step backward for women; the RNC accused Biden of saying "appalling" and "arrogant" things as part of an "old-style attack." A few hours later, McCain's campaign accused Obama of calling Palin a pig, after he said McCain and Palin's effort to steal his "change" message amounted to "putting lipstick on a pig." Joe Biden will probably follow tradition and reserve his sharpest rhetorical elbows for McCain at the vice-presidential debate next month; if he doesn't, expect more cries of sexism from the GOP.

Actually, for now, a lot about Palin remains to be seen. Greenberg's research found women mostly wanted to hear more about her; she didn't instantly win anyone over to McCain's corner, except Republicans who were already disposed to support him. "Is there something about her in particular" that will give McCain a longer bounce than usual, Greenberg asked? "I don't think we know that yet."

Simply by showing up at the convention and giving a good speech, Palin impressed a lot of voters. But that could turn out to have been another case of what another Republican governor from an oil-producing state once called the "soft bigotry of low expectations." Once Palin leaves McCain's side, heads out on the road on her own and starts doing more than just reading prepared speeches, will the luster wear off? Obama -- and Democrats -- are gambling that it will.