McCain's running mate is a Christian Stepford wife in a sexy librarian costume. Women, it's time to get furious. 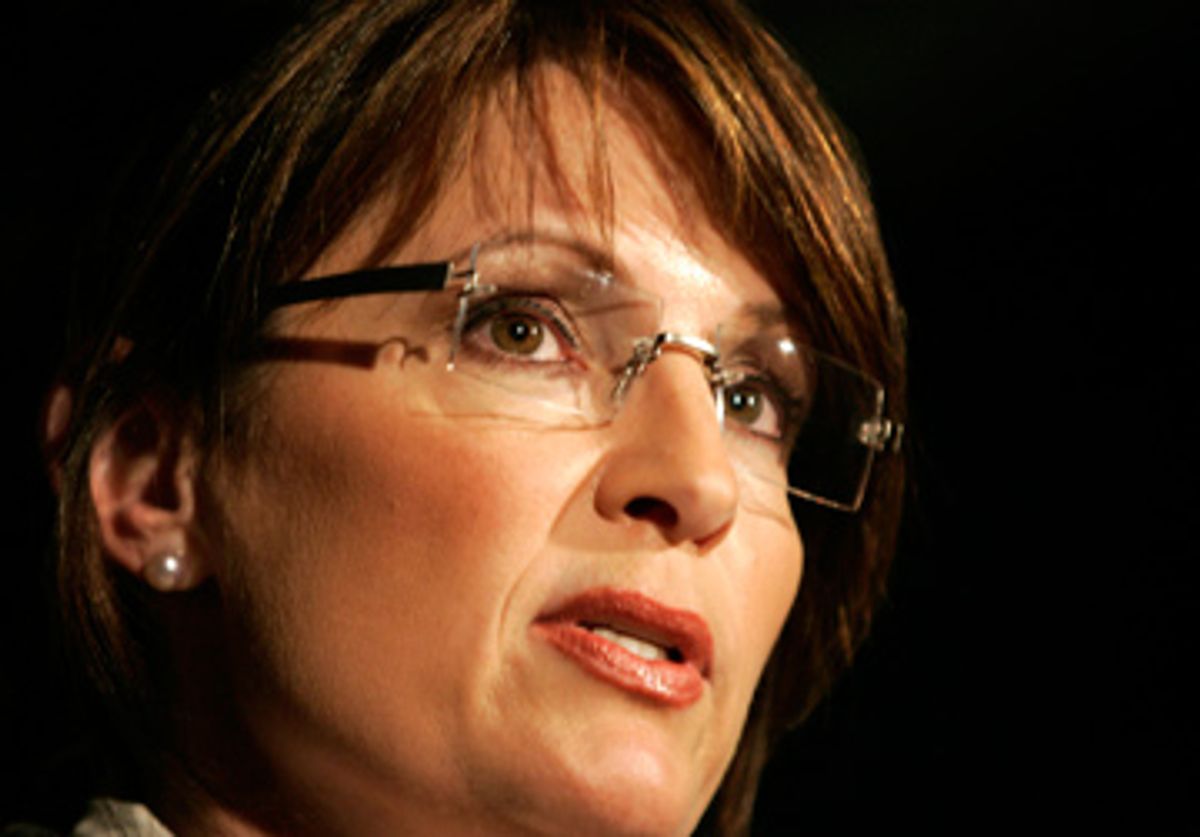 Sarah Palin may be a lady, but she ain't no woman.

I confess, it was pretty riveting when John McCain trotted out Sarah Palin for the first time. Like many people, I thought, "Damn, a hyperconservative, fuckable, Type A, antiabortion, Christian Stepford wife in a 'sexy librarian' costume -- as a vice president? That's a brilliant stroke of horrifyingly cynical pandering to the Christian right. Karl Rove must be behind it."

Palin may have been a boost of political Viagra for the limp, bloodless GOP (and according to an ABC/Washington Post poll she has created a boost in McCain's standing among white women to a 53 over Obama's 41). But ideologically, she is their hardcore pornographic centerfold spread, revealing the ugliest underside of Republican ambitions -- their insanely zealous and cynical drive to win power by any means necessary, even at the cost of actual leadership.

Sarah Palin is a bit comical, like one of those cutthroat Texas cheerleader stage moms. What her Down syndrome baby and pregnant teenage daughter unequivocally prove, however, is that her most beloved child is the antiabortion platform that ensures her own political ambitions with the conservative right. The throat she's so hot to cut is that of all American women.

I don't want Sarah Palin being the representative leader and custodian of my rights, my Constitution and my country any more than I want polygamist compound leader Warren Jeffs baby-sitting for my preteen goddaughters.

As a woman who does not believe what Palin believes, the thought of such an opportunistic anti-female in the White House -- in the Cheney chair, no less -- is akin to ideological brain rape. What this Republican blowup doll does with her own insides in accord with her own faith is her business. But, like the worst and most terrifying of religious extremists, she seems very comfortable with the idea of imposing her own views on everyone else.

I did not think that women being downgraded to second-class, three-holed chattel would be a pressing concern in my lifetime. I thought it was like polio, or witch burning -- an inhumane error that had already been corrected. But after eight years of Republican hegemony, and now the potential ascendance of this sheep in ewe's clothing, I am so mortally offended I feel like it is really time for women to be angry, hardcore and disgusted again. Not just with old white Christian patriarchs and their hopelessly calcified, religiously condoned misogyny, but also with the self-abnegating, submissive female Uncle Tommies whose ambitions and eagerness to please the powerful males of their tribe are so desperate that they would sell out their sovereignty over their own bodies. And yours too.

Republicans have -- in a P.T. Barnum, sucker-born-every-minute kind of way -- successfully framed themselves as the custodians of Christian ethics and conservative family values. This stance successfully masks their wholesale class war against the majority of their supporters, who continue to vote blatantly against their own economic interests in thrall to this deliberate emotional manipulation. It was the media critic Douglas Rushkoff who pointed out, several years ago, that Republican politicians were employing marketing techniques perfected by Clotaire Rapaille. Rapaille, broadly paraphrased, introduced a theory that approximately 80 percent of all decision making is done at the level of the limbic system -- our lowest, most colorless, reptilian emotional level. Republican strategies are consistent with a belief that the voting process, for most people, is full of feelings -- but devoid of reason.

Sarah Palin, in this light, makes so little sense that she makes perfect sense. She speciously represents a new power paradigm of the Nice Mommy: the opposite of Hillary (the Mean Mommy), the opposite of Oprah (black, and therefore foreign), the opposite of Martha Stewart (another Mean Mommy). In her support for women on women's issues, she has done everything but volunteer for her own circumcision. She tacitly promises a roll backward into old-fashioned sexual roles -- like Old Testament-style old. Her morality is fixed, predictable and inflexible. There are those who will find comfort in the fact that they will know exactly what can be expected from Palin: Free will subordinated to obedience of an airtight, evangelical interpretation of the demands of God, country and Republican men.

The choice of Palin represents what the Christian right is really saying to the women of America. The subtext: It's a Faustian bargain, girls. To elevate your sex to power and respectability, you must first give us the keys to your chastity belt.

It is unsurprising that the morally compromised fraternity of corruption-infested Republican robber barons and war profiteers came up with this stunt, but we must regard it in the same light as the rest of their treasonous, criminal behavior. We must regard Sarah Palin as the Carmella Soprano of the GOP -- an enabling wife of organized crime, who sees, hears and speaks no evil of the boys in her old-boy network for whom she does this ideological lap dance.

It is a kind of eerie coincidence that Sarah Palin is being sprung on the public at the same time as the bimbo/frat-boy titty comedy "House Bunny," which features a poster of a beautiful young lady with Playmate-style bunny ears, big, stupid eyes and her mouth hanging open like someone just punched her.

Sarah Palin is the White House bunny -- the most nauseating novelty confection of the evangelical mind-set since Southern "chastity balls," wherein teen girls pledge abstinence from premarital sex by ceremonially faux-marrying their own fathers.

Sarah Palin is the sexual front of the culture war and the embodiment of the bold social engineering stance of the new authoritarianism that Republicans have been employing ever since they stole the election in 2000. As a result of conservative Republican policies, America has proved itself to be too rife with fraud, bureaucratic constipation, self-inflicted economic calamity, cronyism and incompetence to effect any positive movement anywhere at all, even at home.

But, the Republicans seem to be saying, at least we can offer you the hope of putting women back in their place.

The Republicans are, in effect, saying: We're not going to win this race on the basis of being the better candidates. Barack Obama is going to make you think. You don't like thinking. Here's an It Girl vice president who is easy on the eyes, you stodgy old white baby boomer. She's like a grown-up version of Mary Ann from "Gilligan's Island." She embodies the raw conviction that everything the Republicans have ever done has been right. She'll make you feel better about yourself for voting for Bush. Twice.

Relax: The war is God's plan. (Or whatever.) Women, even if they are vice president, can always look pretty, worship their husbands in the fear of God and never, ever resist invasions from unwanted sperm.

Sarah Palin and her virtual burqa have me and my friends retching into our handbags. She's such a power-mad, backwater beauty-pageant casualty, it's easy to write her off and make fun of her. But in reality I feel as horrified as a ghetto Jew watching the rise of National Socialism.

She is dangerous. She is not just pro-life, she's anti-life. She is the suppression of human feeling and instinct. She is a slave to the compromises dictated by her own desire for power and control. Sarah Palin is untethered from her own needs and those of her family, which is in crisis, with a pregnant daughter, a son on the way to Iraq and a special-needs infant.

She should, however, be a galvanizing point for women everywhere. Not to support her candidacy but to rebel against the Republican Party and take back the respect and equality so hard-earned by the women's liberation movement in the 1970s.

We've been shanghaied. This is sick. We need to slap the face of our bad frat-boy date and walk home from this drive-in movie. Sarah Palin may put out to be popular, but the rest of America's women don't need to do the same.

If not, what the hell? John McCain should go the whole Hugh Hefner route and have eight V.P.s that all look exactly like Sarah Palin.

It's McCain's world, girls: You'd just live in it.