Anyone who thought the 2008 election would be "different" should examine the "Obama called Palin a pig" story. 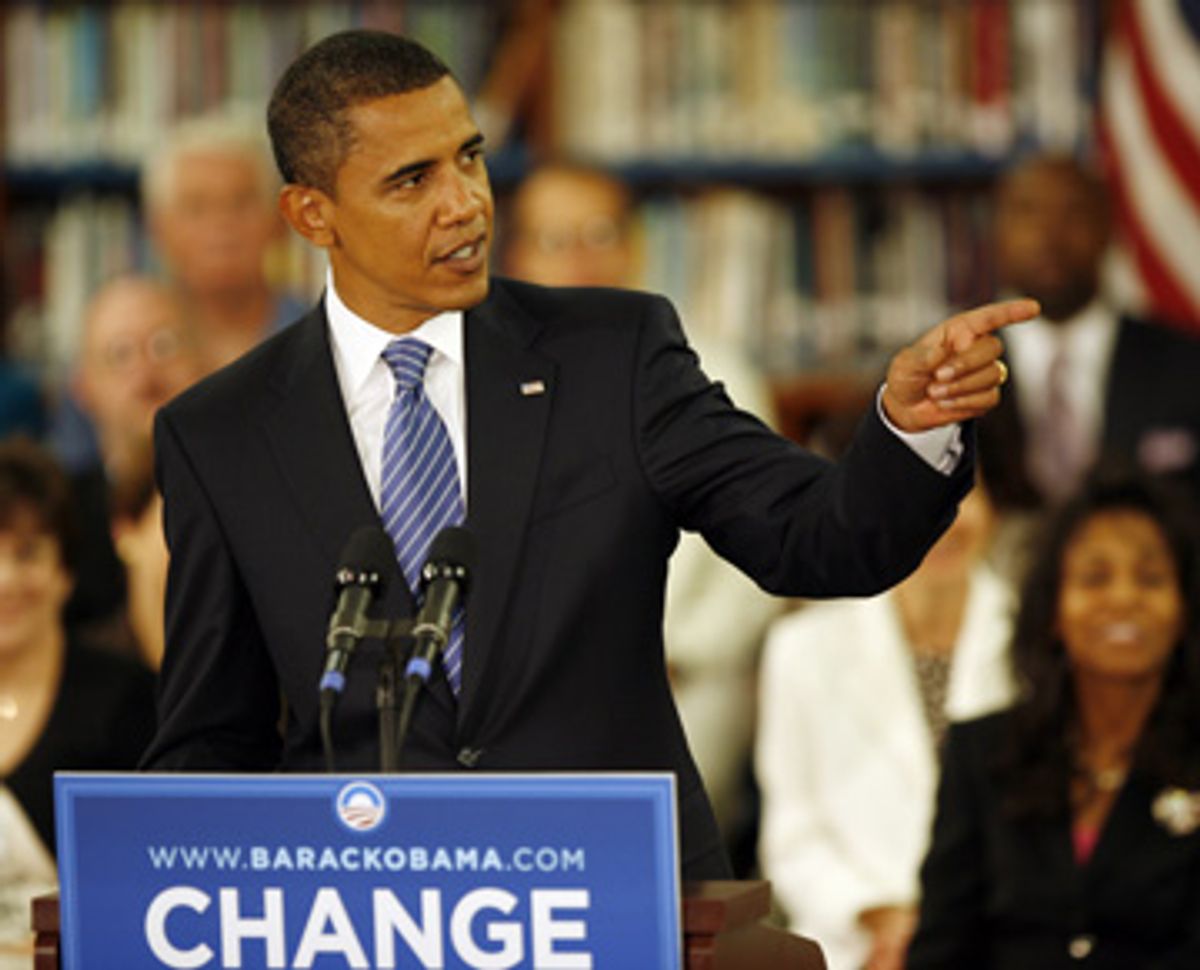 We're fighting multiple wars; our oldest and most established financial institutions are on the verge of collapse; we've fundamentally transformed and then dismantled our constitutional framework over the last eight years, etc. etc. But the Right and their media partners are striving to ensure that our election this year is going to be dominated and determined by whether John Kerry looks stupid in wind-surfing tights Barack Obama called Sarah Palin a "pig" when he invoked a meaningless cliché.

It isn't surprising that the McCain campaign wants this sort of tawdry, Freak Show/Reality Show vapidity to determine the outcome of the election. If you were them, wouldn't you want that, too? And though it's not news that establishment media outlets are so easily and happily manipulated by these tactics, tactics which enable them to cover "stories" which their empty-headed reporters can easily comprehend, it is still striking to watch the now-decades-old process unfold and observe how absolutely nothing has changed:

First, one of the mindless TV journalists gets convinced that it's a story -- in this case, Jake Tapper of ABC News, who wrote a whole article about the episode last night, claiming about Obama's "pig" comment that "the crowd rose and applauded, some of them no doubt thinking he may have been alluding to Alaska Gov. Sarah Palin's ad lib during her vice presidential nomination acceptance speech last week, 'What's the difference between a hockey mom and a pit bull? Lipstick.'" Tapper obviously has no idea what anyone in the crowd was thinking but, instead, was simply using the most frequent tool of journalistic deceit by projecting his own "thoughts" onto the voters on whose behalf he purports to speak.

Second, Matt Drudge -- who, it should not be doubted, still rules their world in peddling moronic right-wing narratives -- screeches about the "story" and thus gives journalists their editorial orders:

Third, McCain campaign surrogates push the story, and the standard right-wing hacks follow along with the script dutifully, as Sean Hannity hosts segments on this monumental controversy and the most widely-read right-wing Republican blogger, who hasn't brought himself to write more than five words on any story in several years, writes a virtual novel on this matter last night: 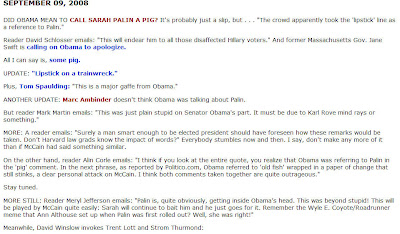 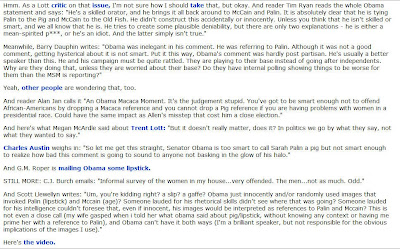 Fourth, other right-wing outlets such as National Review -- with a long, illustrious and inspiring history of combating bigotry and sexism -- write outraged posts about this comment, and it promptly becomes the most-discussed "story" on the Internet: 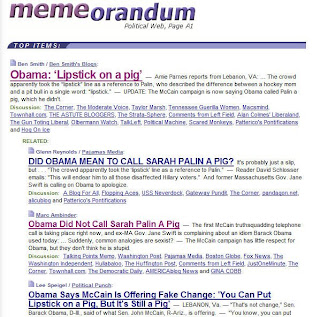 Fifth, establishment media outlet obediently follow along, featuring this controversy as a top story. Here is the front page of MSNBC's website this morning: 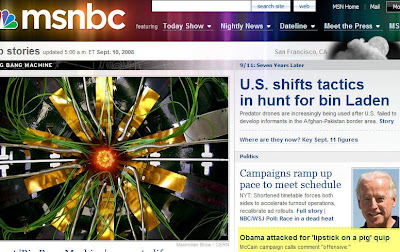 The reasons why this "controversy" over Obama's use of a platitude is all so appallingly stupid are too self-evident to merit describing, but the fact that there is this places it well beyond the realm of standard stupidity:

The only actual story here is how brazenly deceitful and cynical the McCain campaign is, and what helpful and easily manipulated allies the establishment media is in all of that. The efforts of a few isolated reporters to debunk the story won't end up mattering much because, once injected into the Freak Show stew with the help of Jake Tapper, AP and MSNBC, it festers. Even if debunked, it helpfully distracts the country -- for another day or two, until the next insipid controversy emerges -- from the crises which have been created over the last eight years by the very same people who endlessly foist this idiocy into our elections. All of this makes Nero's fiddling look sober and responsible by comparison.

UPDATE: The New York Times' political reporter Adam Nagourney -- who single-handedly catapulted the "Kerry-looks-French" and "Edwards-is-the-Breck-Girl" slurs to national prominence during the 2004 election -- writes about Obama's "lipstick" remarks, fantasizes about what Obama was thinking at the time, and then writes about it as though it is fact. Meanwhile, the McCain campaign produces a television ad around this issue.

I am generally quite opposed to the defeatist "we're-inevitably-doomed" contingent, but on days like this, it's hard to deny that they have substantial ammunition for their worldview.

UPDATE II: In developments that one could describe as not only highly related but also highly deserved, The Washington Post today reports:


An intelligence forecast being prepared for the next president on future global risks envisions a steady decline in U.S. dominance in the coming decades, as the world is reshaped by globalization, battered by climate change, and destabilized by regional upheavals over shortages of food, water and energy.

The report, previewed in a speech by Thomas Fingar, the U.S. intelligence community's top analyst, also concludes that the one key area of continued U.S. superiority -- military power -- will "be the least significant" asset in the increasingly competitive world of the future, because "nobody is going to attack us with massive conventional force." . . .

"The U.S. will remain the preeminent power, but that American dominance will be much diminished," Fingar said, according to a transcript of the Thursday speech. He saw U.S. leadership eroding "at an accelerating pace" in "political, economic and arguably, cultural arenas" . . . .

As described by Fingar, the intelligence community's long-term outlook has darkened somewhat since the last report in 2004, which also focused on the impact of globalization but was more upbeat about its consequences for the United States. The new view is in line with that of prominent economists and other global thinkers who have argued that America's influence is shrinking as economic powerhouses such as China assert themselves on the global stage.

Also, Barack Obama a couple of days ago gave quite a good speech -- finally -- in which he "ripped into Republicans for undermining the rule of law" and "blasted Gov. Sarah Palin for 'mocking' the Constitution." He added: "It's because that's who we are -- that's what we're protecting! Don't mock the Constitution! . . . Don't suggest that it's un-American to abide by what the founding fathers set up -- it's worked pretty well for over 200 years!"

Whatever. Did Obama call Sarah Palin a pig??? Let's debate that more.

UPDATE III: As he so often does, Tom Tomorrow perfectly captures in six animated boxes the sickly essence of the media behavior responsible for all of this -- here.

UPDATE IV: This seems worthy of some actual consideration:

UPDATE V: This message, formed a bit more aggressively and offensively, and expressed repetitively, every day, would, in my view, work quite well in responding to this Freak Show muck:

UPDATE VI: Here's a poll prepared by the McCain campaign MSNBC and promoted on the front page of its website right this very minute:

UPDATE VI: Apparently, "the whole episode is a deceitful and juvenile concoction from the Rovian disciples running McCain's campaign" isn't an option that MSNBC even recognizes. In the world of MSNBC -- the Liberal Wing of The Liberal Media -- Obama's comments are either (a) a dirty slur against Palin that goes way too far or (b) a dirty slur against Palin that typifies our harsh and dirty political process.

It's important to underscore here that a one-day complaint from Obama -- as effectively formulated as today's message was -- is nowhere near sufficient to combat these tactics, which are only going to continue and intensify between now and the election. It's a message he needs to sharpen and repeat daily, and turn into an offensive weapon ("they want you to pay attention to shallow sideshows to make you forget what they've done to the country over the last 8 years"). Anyone who doubts that should look at how Mike Dukakis -- renowned as the ultimately weak and passive candidate who was rolled over by the 1988 brigade of smears -- once responded to some of these attacks:


MICHAEL DUKAKIS: I'm fed up with it. Haven't seen anything like it in 25 years of public life. George Bush's negative TV ads, distorting my record, full of lies and he knows it. I'm on the record for the very weapons systems his ads say I'm against. I want to build a strong defense. I'm sure he wants to build a strong defense. So this isn't about defense issues. It's about dragging the truth into the gutter. And I'm not going to let them do it. This campaign is too important. The stakes are too high for every American family. The real question is, will we have a president who fights for the privileged few, or will we have a president who fights for you? George Bush wants to give the wealthiest one percent of the people in this country a new tax break worth $30,000 a year. I'm fighting for you and your family, for affordable housing and health care, for better jobs, for the best education and opportunity for our children. It's a tough fight, I know that. Uphill all the way, but I'm going to keep on fighting because what I'm fighting for is our future.

That sounds not all that different from what Obama said today. So it isn't enough simply to respond this way when attacked with shallow, adolescent slime. It's a message that has to be delivered very aggressively, unapologetically and repetitively in order for it work.

UPDATE VII: It's possible that the McCain idiocy from today may be a bridge too far, even for establishment journalists, and could help build a narrative of a superficial, deceitful campaign. Many of them are actually rather vehemently objecting to the moronic "lipstick" attacks, and here is Chris Matthews doing the same on "Hardball" today, with Joan Walsh and conservative "analyst" Michelle Bernard in basic agreement: