Alan Ball, the Coens, a re-release of the greatest film of the '70s and a tribute to Britain's most important filmmaker -- and I'm on vacation! 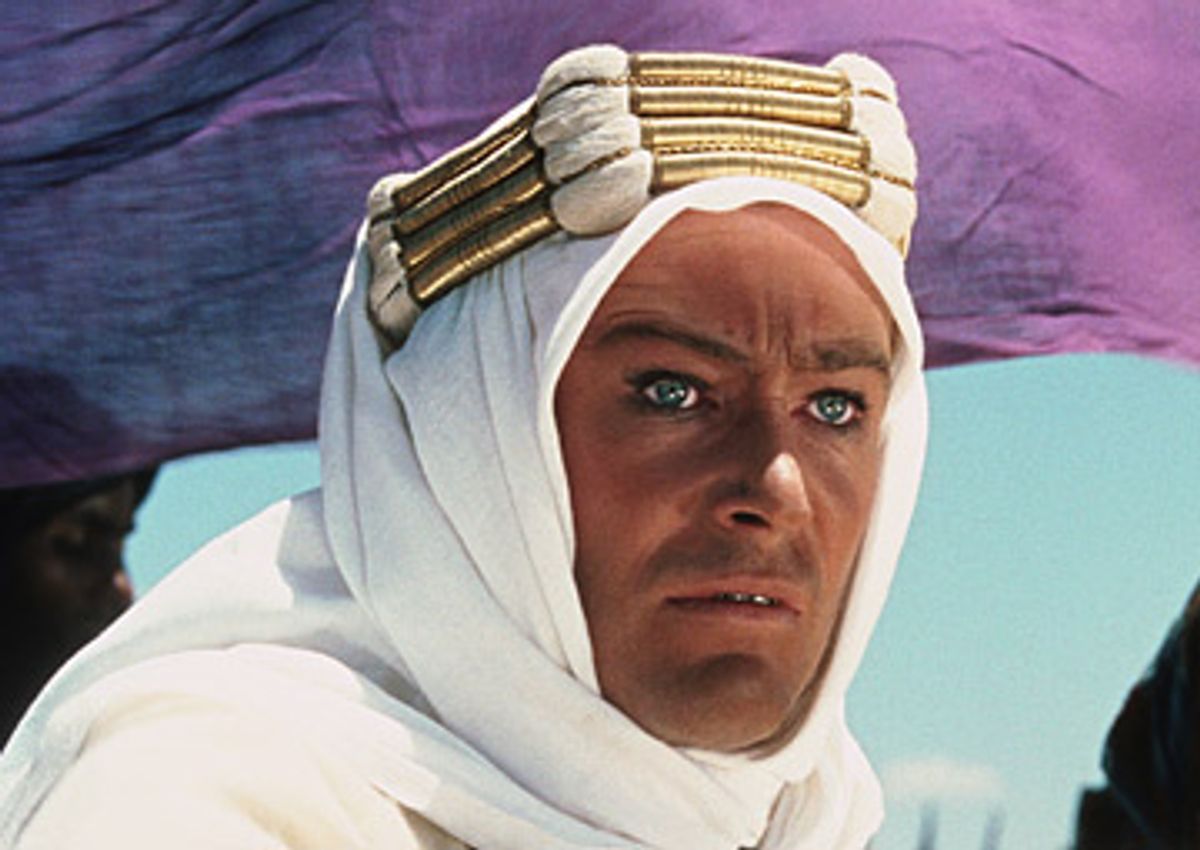 Peter O'Toole in "Lawrence of Arabia."

Since there's no downtime in the film calendar anymore, I'm just going to go ahead and take a vacation during the busiest infotainment season of the year. I'm sorry to harsh out Harvey Weinstein's mellow and all, but my mom hasn't seen her grandkids in seven months, and there you have it.

I've got reviews of Alan Ball's literary adaptation "Towelhead" and the Coen brothers' new George Clooney-Brad Pitt spy farce "Burn After Reading" ready to run later this week. I wasn't super-nice to either of those films, but I won't be alone in that, I suspect.

Also opening this week are a couple of intriguing-sounding documentaries I haven't caught yet: film critic-turned-filmmaker Godfrey Cheshire's "Moving Midway," about the relocation of his family's North Carolina plantation house; and Irena Salina's "Flow," which is about the global water crisis, possibly the most urgent environmental issue of today, tomorrow and the day after that. Both open Sept. 12 in New York before national rollouts begin.

New York's Film Forum hosts two major events this week: the theatrical premiere of Francis Coppola's supposedly final restored versions of "The Godfather" and "The Godfather Part II," which will play a few cities before arriving as one of the most anticipated DVD sets ever released; and the launch of "David Lean: Ten British Classics," a marvelous British Film Institute retrospective to mark the director's centenary, featuring restored versions of the "Lawrence of Arabia" auteur's lesser-known early films. (Watch Salon's Critics Picks section on Saturday for more about Lean.) Meanwhile, a few blocks away Anthology Film Archives is hosting a retrospective for the influential underground filmmaker Robert Downey Sr.; it's possible you're more familiar with his son.

I'll be back on Sept. 18, ready to plunge into the New York Film Festival. In the interim, I may post once or twice as events warrant. Also may not. If you see me this weekend at the Monterey Bay Aquarium, say hello. I'll be the tall guy trying to keep a couple of 4-year-olds out of the stingray tank.