Where she was saved

The church where Sarah Palin grew up and was baptized preaches some of the most extreme religious views in the nation. 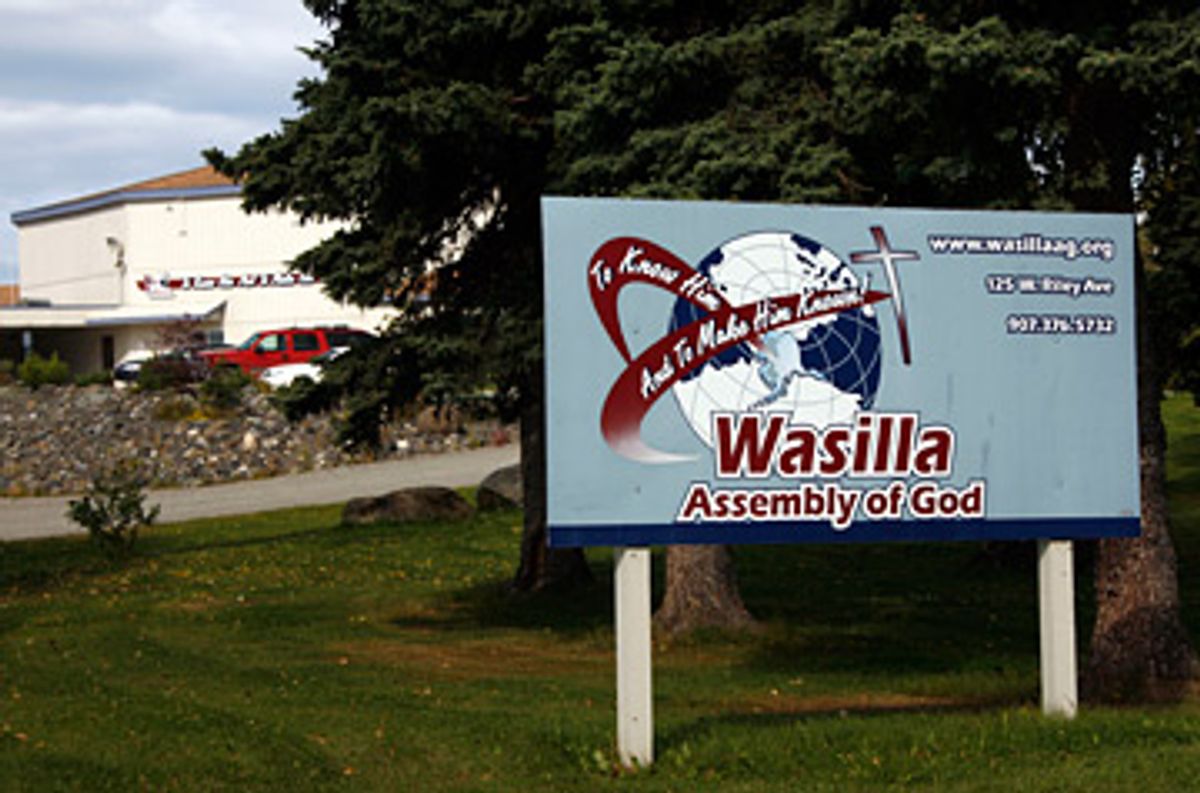 In June, Sarah Palin took the stage at the Wasilla Assembly of God, a deeply conservative Pentecostal church. The excitable Alaskan governor told a graduating class of missionary students that it "was so cool growing up in this church, getting saved here, getting baptized." She went on to declare that her son Track will deploy to Iraq, and urged students to pray "that our leaders, that our national leaders, are sending [soldiers] out on a task that is from God." She added: "That's what we have to make sure that we are praying for -- that there is a plan and that that plan is God's plan."

One big question about Palin is how that deterministic view of God's will in world affairs influences her decision-making on issues ranging from the Middle East to the environment, sexuality to education. What is not in doubt is that her addition to the Republican ticket has fired up the religious right and the party's most conservative base.

The McCain campaign has downplayed Palin's Pentecostal roots. But as her testimony at the Wasilla Assembly of God demonstrates, she is motivated by the idea that godly forces are locked in spiritual warfare with satanic forces. For many with a Pentecostal upbringing like Palin's, fighting that battle is part of God's plan for the end of days, when war will end the world as we know it, Jesus will come back, and non-Christians will convert or perish.

Pentecostals are so named for the feast, or Pentecost, documented in the Book of Acts, during which early followers of Jesus were said to have been "filled with the Holy Spirit" and able to "speak in other tongues." Although they share religious doctrine with other evangelicals, Pentecostals' religious experiences include such "spirit-filled" expressions as speaking in tongues, receiving divine prophecy and revelation, casting out demons and witnessing miracles. While not all Pentecostals are conservative (Leah Daughtry, the chairwoman of the Democratic National Convention, is a Pentecostal minister), most of them, according to a 2006 study by the Pew Forum on Religion and Public Life, are more conservative than other Christians on social, moral and spiritual issues, and far more likely to believe in the rapture and end-times.

Palin was raised as a Roman Catholic before being saved and baptized at Wasilla Assembly of God. In 2002, the year she first ran for statewide office, unsuccessfully for lieutenant governor, she left her childhood church and joined the Wasilla Bible Church, a nondenominational evangelical church that "believe[s] in the Bible as the only inspired inerrant Word of God authoritative for faith and practice," according to its statement of faith. In contrast to Assemblies of God, the Wasilla Bible Church's statement of faith contains no reference to such Pentecostal requirements as speaking in tongues, divine healing or belief in the rapture. When she's in the state capital, Palin attends the Juneau Christian Center, an Assemblies of God church, although it doesn't advertise that in its name.

"All of us in the business know that 'Christian Center' is an Assemblies of God church trying to rebrand itself to people who are not necessarily Pentecostal," says Anthea Butler, a religion professor at the University of Rochester and an expert on Pentecostalism. "You don't put Assemblies of God on the door because people think, 'Oh, those are the holy rollers.'"

Based on her public statements, Palin's views appear to be in line with the Assemblies of God official positions on abortion, creationism and homosexuality. The denomination "views the practice of abortion as an evil that has been inflicted upon millions of innocent babies and that will threaten millions more in the years to come." The only possible exception is if the mother is at "likely" risk of death; "however, vague threats to the mother's physical or emotional health must not become an excuse to place the child at risk." With regard to creation, the Assemblies of God's official position is that "even though the Bible is not primarily a book of science, it is as trustworthy in the area of science as when it speaks to any other subject" and its "account of creation is intended to be taken as factual and historical." Homosexuality is a sin because "it is disobedient to Scriptural teachings," "contrary to God's created order for the family and human relationships," and "comes under divine judgment."

The National Association of Evangelicals, of which the Assemblies of God is a member, has attempted to broaden its horizons beyond the culture wars to address global warming. But the only official statement on the environment from the staunchly conservative Assemblies of God comes from its Commission on Doctrinal Purity and the Executive Presbytery: "Today in our American culture, many people have turned their adoration from the Creator to the creation. They have gone to the extreme and are now worshiping the earth. We believe worship of the land, the sea, the oceans, and other attributes of the earth is an abomination to God the Creator."

Belief in the rapture and end-times is part of the official position of the Assemblies of God. That puts the church in tune with the 90 percent of Pentecostals who believe in the rapture, compared to 59 percent of other Christians. (During the rapture, believers will be whisked off to heaven to sit out the bloody tribulation period and final battle before Jesus returns.) John Hagee, the white evangelical pastor of a Texas mega-church, who endorsed John McCain, believes that war against Iran is a necessary fulfillment of biblical prophecy of how the end-times scenario will unfold. (McCain later rejected Hagee's endorsement over Hagee's controversial statements that the Holocaust was God's will.)

Many more evangelicals belong to neo-Pentecostal, nondenominational churches. In the conservative ones, the rhetoric of spiritual warfare, particularly in the context of political issues, is common. When McCain rejected the endorsement of televangelist Rod Parsley because of Parsley's statements that "Islam is a false religion that must be destroyed," he was rejecting Parsley's version of spiritual warfare, in which the divine force of the United States of America will vanquish the enemy of red-blooded American Christianity.

Yet Pentecostals celebrate that spiritual battle. And the religious right is rapturous about having Palin on their side. "The McCain camp may want to play her as the reformer maverick, but it's her Christian warrior spirit that has really brought McCain and his team the jolt they've needed," the Christian Broadcasting Network's David Brody wrote this week on his blog.

Religion professor Butler says that warrior spirit -- or Palin's "Pentecostal-ness" -- is the reason why her candidacy excites the conservative base more than a non-Pentecostal would. Watching Palin's speech to the Republican National Convention, Butler says she thought to herself, "This is a flat-footed, I'm-in-the-back-of-the-camp-meeting-truck-preaching-woman" in the style of the trailblazing early 20th century evangelist Aimee Semple McPherson.

At the end of her speech to the Wasilla Assembly of God youth missionaries, Palin prayed for a spiritual revival in the state of Alaska. "I'm just praying for an outpouring of God's spirit, for a revival to be here in Alaska," she declared. After the pastors prayed over the governor, and described Alaska as a "refuge state in the last days," Palin explained that when she attends other churches, the pastors apologize in advance for parishioners who might raise their hands or clap, in the spirit of Pentecostal worship. "And I say," said Palin, bursting with pride and laughter, "I grew up in Wasilla Assembly of God. Nothing freaks me out!"