An America-first election -- and Obama benefits

Seven years after 9/11, national security -- a political strong suit for the GOP -- recedes into the woodwork as voters focus on domestic issues. 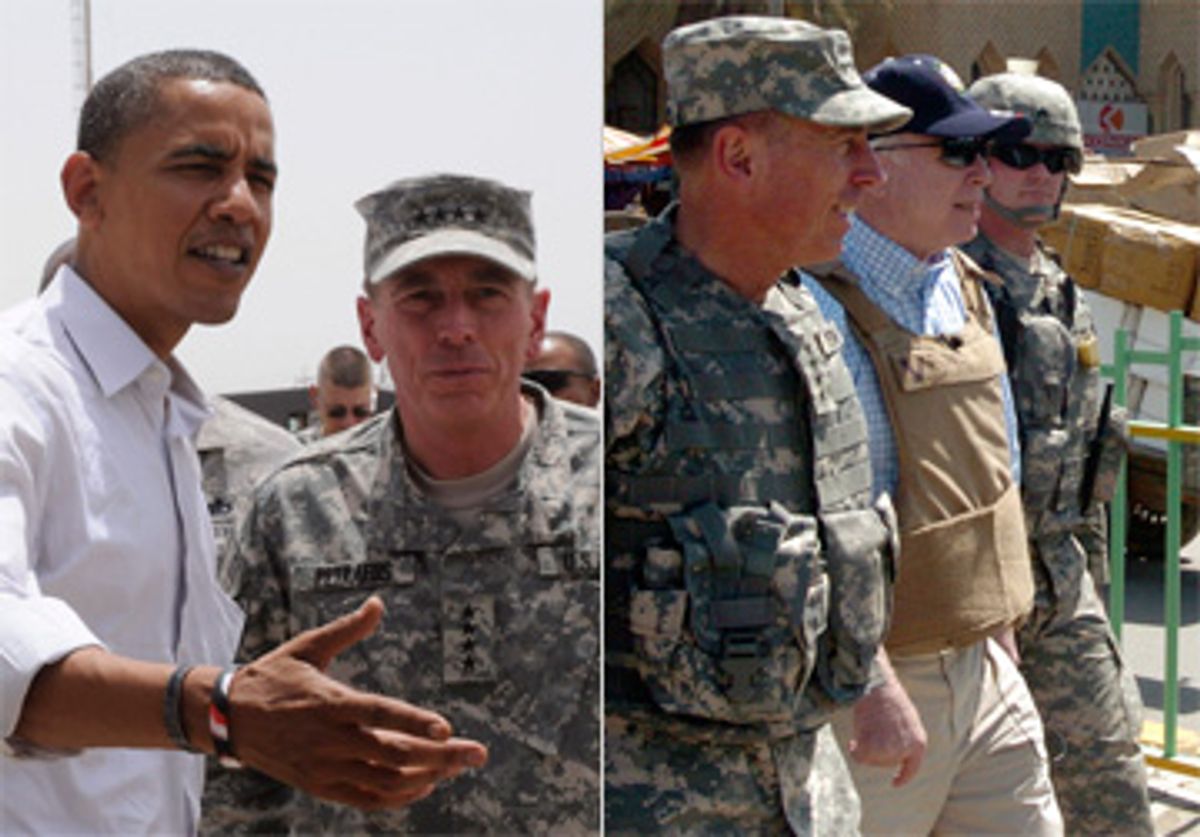 In the anguished nothing-will-be-the-same days after Sept. 11, 2001, it was impossible to imagine a 21st century presidential election -- conducted while America was fighting two wars -- in which national security was treated as less of an issue than congressional earmarks or whether "lipstick on a pig" was a sexist term. A Washington Post/ABC News poll released this week found that only 17 percent of the voters consider the most pressing issue in this campaign to be Iraq, national security, terrorism or foreign policy.

This "my interest in the world stops at the water's edge" attitude among the voters may reflect a level of self-absorption that is troubling for a globe-girdling superpower. But in a narrow partisan sense, these America-first sentiments may represent Barack Obama's best route to the White House. As Democratic media consultant Ray Strother, currently a fellow at the Robert Dole Institute at the University of Kansas, puts it, "It would be a real error for Obama and the Democrats to devote a lot of energy toward national security because they can't win it."

The post-convention surveys underscore the Democratic deficit. A Gallup poll, conducted last weekend, found that voters hand John McCain a 55-to-38 percent edge as the candidate best equipped to "handle terrorism." The Washington Post survey gives McCain a double-digit edge over Obama on three separate questions relating to terrorism, international affairs and the war in Iraq. "The Democrats have never been perceived as strong on national security," says Monika McDermott, a political scientist and polling expert at Fordham University. "Part of it is that they don't come across as tough and part of it is the result of stereotypes. And Barack Obama just doesn't have the foreign-policy credentials to change that."

Even Democratic foreign-policy patriarchs admit the problem. "We probably haven't done a good enough job spelling out our national-security bona fides," concedes former Indiana Rep. Lee Hamilton, the longtime chairman of the House Committee on International Relations and a foreign-policy advisor to Obama. "The Democrats tend to slight national security, there isn't any doubt about that. And the Republicans jump on it. It happens when Obama talks about public service and fails to mention the military or when we put together a platform and don't put sufficient emphasis on national security. We have trouble talking about patriotism in the Democratic Party. We ought not to, but we do."

It is tempting to dismiss these concerns as akin to the manufactured flap over whether Obama was deficient in his love of country because he sometimes resisted marring the trim lines of his dark suits with the requisite American flag lapel pin. But symbolism matters -- and it may partly explain why when it comes to Iraq more voters prefer McCain, an early on-to-Baghdad hawk, to Obama, an original opponent of the invasion. This calculus may seem bizarre to many Democratic partisans, but it is a realistic reflection of the terrain over which the 2008 election is being fought. Obama's judgment in opposing the Iraq war may have trumped Hillary Clinton's experience argument in the Democratic primaries, but up-for-grabs general-election voters long ago stopped caring about who voted how on Iraq six years ago.

Peter Feaver, a political science professor at Duke University who served on George W. Bush's national security council staff, observes, "The Democratic Party is divided on national security between its elite and its base. And that's a real problem for the Democrats. It's not that they lack hawkish experts or moderates on national security. They have them at all ranks from [Joe] Biden, who's fairly hawkish, to people like [former U.N. ambassador Richard] Holbrooke and [former Secretary of State] Madeleine Albright ... If you look at the Democratic bench -- people who will take over if Obama wins -- many of them are in the mainstream middle of the fabled bipartisan consensus. They are much closer to the Republicans than the Democratic base."

The Republicans have internal cleavages of their own, such as badly papered over divisions over immigration. But the split in the Democratic Party over, say, the war in Afghanistan (which a significant fraction of partisans oppose) or the pace of withdrawal from Iraq is real. Just recall the antiwar ire directed at House Speaker Nancy Pelosi when she failed to muster the votes (which probably were not there in the first place) to block military appropriations for Iraq. As Feaver puts it, "I don't see Obama doing much rhetorically to knit these two factions together. He's holding them together because of shared antipathy to the Bush administration and party loyalty."

Even in the headlong rush to the center -- which has been the Democrats' fall strategy since the ill-fated but ideologically pure 1972 George McGovern campaign -- no one is advocating that Obama imitate McCain's bellicose ways. As Hamilton shrewdly says, "The Democrats are not going to win by out-toughing McCain. McCain has already captured the hard-line voter -- the voter who wants very aggressive responses to the Russian invasion of Georgia, the group that wants to bomb Iran, the group that sees a military solution to most problems in the world. We're not going to get those people. They're going to go to McCain."

Not all Democrats believe that the prudent political approach to all campaign discussions of national security is to immediately change the subject to the stagnant economy or pain-at-the-pump gas prices. Democratic pollster Jeremy Rosner, who worked on foreign policy issues in the Clinton White House, argues, "Unlike the situation for eons in the past, the Republicans are carrying severe liabilities in this election on national security. Because of Bush, the Republicans -- particularly McCain -- are seen as reckless and out of touch. And voters don't want someone reckless and out of touch to keep them safe." Strother makes an analogous point: "If the Democrats do anything on national security, they have to depict McCain as too quick on the trigger."

Even without conjuring up the gruesome possibility of a pre-election terrorist attack, national security issues have a way of interjecting themselves unbidden into the middle of presidential elections. Two unstable nuclear powers -- Pakistan with the fall of Pervez Musharraf and now North Korea with Kim Jong-Il's apparent stroke -- could go through headline-making internal convulsions. The military situation in Iraq and Afghanistan could again raise American military casualities to a front-burner political issue. And the debates (as Gerald Ford demonstrated in 1976 by appearing not to realize that Poland was a communist country) could make foreign-policy readiness a major concern of the voters.

But for a moment, as the nation prepares to take a brief hiatus from political invective on the seventh anniversary of the fall of the twin towers, it is a merciful gift that terrorism seems less of an immediate threat than the mortgage crisis, nearly $4 gas, and the monthly unemployment rate. Perhaps President Bush's greatest political gift to the Democrats has been to lay the groundwork for another "it's the economy, stupid" election.