Neal Stephenson's "Anathem" pulls off what most writers would never dare attempt -- it is simultaneously a philosophical argument and a ripping good yarn. 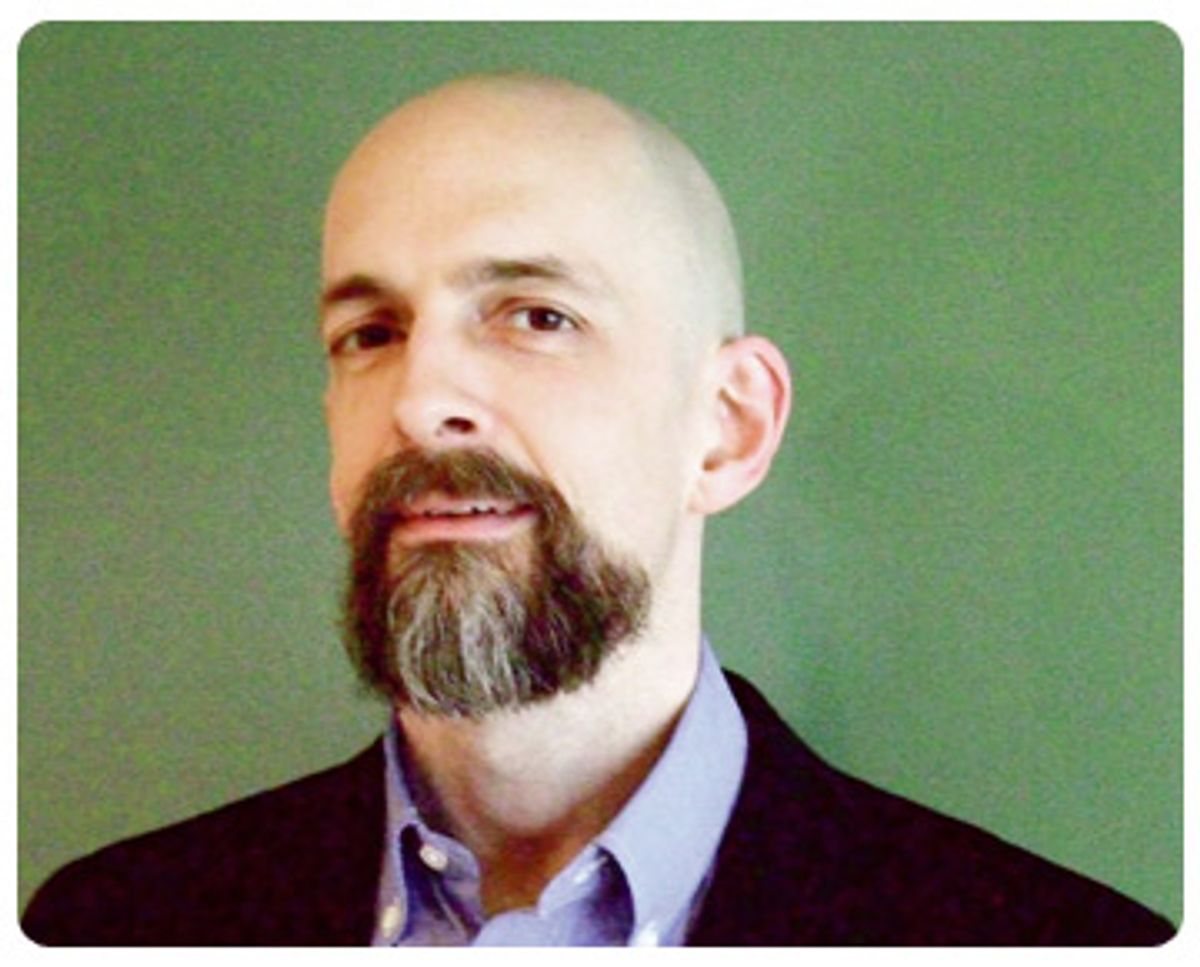 A telling moment comes early in "Anathem," Neal Stephenson's latest mind-bogglingly ambitious epic saga. On the planet Arbre, mathematicians and philosophers have been segregated from the rest of humanity for a very, very long time. They live in "concents" -- an intentional conflation of the words "concentration camp" and "convent." As the story begins to unfold, our hero, Fraa Erasmus, is giving an outsider a tour of the concent's main attraction, a magnificent clock that depends on the sun for daily synchronization.

In practiced tour guide patter, Erasmus casually observes: "But even during a nuclear winter, when it can be cloudy for a hundred years, the clock doesn't get too far out of whack."

The concent's residents organize their lives according to a time scheme in which not just seasons, but nuclear winters, come and go. Outside the concent's walls, the rest of humanity goes about its business like so many fast-food- and video-game-obsessed mayflies. Sometimes the "avout" -- as the mathematicians and philosophers call themselves -- look out their windows and see skyscrapers looming over them, but a few centuries (or millenniums) later, there's nothing to see but ruins mined for their scrap steel. All the while, the avout tend to their knitting, which involves nothing less than understanding the most intimate secrets of space, time and the universe. They also dress like monks, copy manuscripts by hand and sing together at every opportunity.

Dating back to his breakthrough 1992 novel "Snow Crash," Neal Stephenson has made a name for himself as a writer whose imagination knows no limits, who mixes adventure with lavish doses of science and speculation and humor. 1999's "Cryptonomicon" is the single greatest novel to emerge from the cultural nexus where computers, hackers and science fiction meet. "The Baroque Cycle" -- a three-volume, nearly 3,000-page rampage that took as its subject nothing less than the Enlightenment and the birth of the modern world -- was likely the most entertaining historical novel ever to feature Isaac Newton and Gottfried Leibniz as key characters. For his many devoted readers, a new Stephenson novel is a major event. But the stakes are high. When you look back at his most recent work, you have to wonder, how in the heck can you top that?

One way is to tackle, head-on, some of the most complicated and difficult questions that humans have ever posed for themselves. A vast and tangled web of fantastic history seethes through "Anathem" -- 7,000 or so years of holy wars, rising and falling empires, global catastrophes and technological miracles. But there's also all the philosophy and mathematics and theology that seven millenniums' worth of smart people can pump out. To call "Anathem" a novel of ideas is to sell it absurdly short. Ideas are the pulsing lifeblood of "Anathem"; they undergird every plot twist, they dominate every dinner party, every road trip, every conversation.

"Anathem," Stephenson recommends in his acknowledgments, "is best read" as "a fictional framework for exploring ideas that have sprung from the minds of great thinkers of Earth's past and present." Such thinkers include "Thales and Pythagoras, Plato, Saint Augustine, Leibniz, Kant, Mach, Husserl, and Godel."

One imagines readers unfamiliar with Stephenson's oeuvre staring in horror at that last paragraph. Where's the fun in that? In "Snow Crash," Stephenson delighted his readers with the greatest display of pizza delivery technology ever imagined, and had way, way too much fun with the comic possibilities of virtual reality. But now he wants his fans to wade through nearly 1,000 pages of speculative fiction recapitulating the debate between analytic and continental philosophy? Could there be a prospect more terrifying?

And would it improve matters if I observed that Stephenson keeps us off balance by changing the names of all the Earth-based philosophers (Socrates becomes "Thelenes"; Plato, "Protas"), invents a ton of Arbre-specific jargon that requires a few hundred pages of reading to become comfortable with, and has a habit of interrupting the action to retell the Golden Oldie Classics of philosophy that most of us spend the better part of our lives forgetting -- Plato's Cave! Cogito, Ergo Sum! -- but with some key details changed just to make sure we're paying close attention? You might think that, like one of the alchemists driven mad by lead poisoning in their feverish quest to transmute gold, Stephenson has been staring a little too long into the fire.

But hey, that's why there's a timeline and a glossary and a still-under-construction helpful Web site! So quit yer whining and dig in. "Anathem" is not for the weak of heart. But there are compensations. In "The Baroque Cycle," Stephenson balanced his obsession with the evolution of modern science, the birth of finance and the invention of calculus with plenty of swordplay, alchemy and dynastic intrigue to spice things up and keep the plot moving. It all ended up quite a hoot.

And so does "Anathem." Or at least I think so. But I may not be a trustworthy narrator. Evolution has bequeathed me a brain that is particularly amenable to Stephenson's narrative patterns. This has been clear for 20 years now, and proven by the frequency in which snippets from my previous reviews of his works have an uncanny habit of being born again as blurbs on the back of subsequent Stephenson novels, including "Anathem."

This either gives me no credibility or total authority. You decide. But I stand by my words. Who else but Stephenson would dream up a Socratic dialogue (of course, in "Anathem," it's called a Suvinian dialogue) featuring a pink nerve-gas-farting dragon? A scene that itself is merely a precursor to a brilliant tweak of the fundamentalist religious position that "fossils were put there by God to test our faith."

"Anathem" pulls off what most writers would never dare attempt -- it is simultaneously a page turner and a philosophical argument, an adventure novel and an extended existential meditation, a physics lesson, sermon and ripping good yarn. "Anathem" also resonates with social observations rooted in our time, right now, on earth, but delivered by aliens on another planet, where they log on to a "Reticulum" instead of an Internet, and answer annoying "jeejahs" instead of annoying cellphones.

The names have changed, but the geometry remains the same. If you are already a fan of Stephenson, you will not be disappointed -- you will be utterly engrossed. If you like a little dash of philosophy in your science fiction you will be delighted. If you wrote a dissertation on German idealism you will think you've died and gone to heaven. Can I hear an amen?

If you don't like philosophy, hate math and desire more character development than Kant in your fiction ... best to stay away. Likewise if you are an evangelical Christian who believes government should serve your personal interpretation of the teachings of Jesus Christ.

Some early reviews of "Anathem" have complained that it takes a while to get going, and that all the made-up words and unexplained history are confusing, especially at the outset. At least some part of this is intentional. "Anathem" reads as a glorious puzzle, both for readers and for its own protagonists. Learning how all the pieces fit together is an experience best left to the reader. So I'm going to steer away from spoilers.

But I don't think it will spoil the fun to observe that at the core of "Anathem" run tensions, not just between different schools of philosophic thought, but also between faith and the scientific method, and between those who understand how things work and those to whom technology is indistinguishable from magic.

This tension is both real and false. For all his love of technology and science, Stephenson is not an irreligious man. There is a clear sympathy for those who would try to unify the belief systems of Deolaters (god worshipers) with the worldview of the avout "theors" -- (another Stephensonian construct). But in "Anathem" he expresses little patience for "simple, unsubtle creeds." His most unsympathetic character is a theocrat who styles himself the "Warden of Heaven" and whom I imagine looking a lot like Jerry Falwell.

The avout tend to scorn the Deolaters for their inability to prove their beliefs, but they keep a reasonably close eye on them. They've been around long enough to know that one sign that a technologically sophisticated and affluent society outside the concent's walls may have "peaked" is when an aggressive strain of Deolaters starts gaining political power because they feel threatened by certain things that "the avout tend to believe" -- such as the fact that the world is old.

Which, naturally, leads one to wonder whether Stephenson is suggesting that the society in which he lives is in danger of peaking -- or already has. It wouldn't be the craziest thing I've heard this week. Or maybe he is just warning us that progress toward endlessly more progressive states of being is not necessarily inevitable. Skyscrapers, they come, they go, just like interstellar spaceship streetcars.

In the end, it's all a miracle -- the polycosmic universe, the Adrakhonic Theorem (think right triangles), the nature of consciousness and, above all, the complexity of mind. One of the heroes of "Anathem," we are told, "had an instinctive skepticism of any system of thought, religious or theorical, that pretended to encompass that miracle, and in so doing sought to draw limits around it." It's not hard there to see directly into the mind of God, or the Author, which, when you're talking about the creator of an epic saga, amounts to the same thing.