No country for human beings 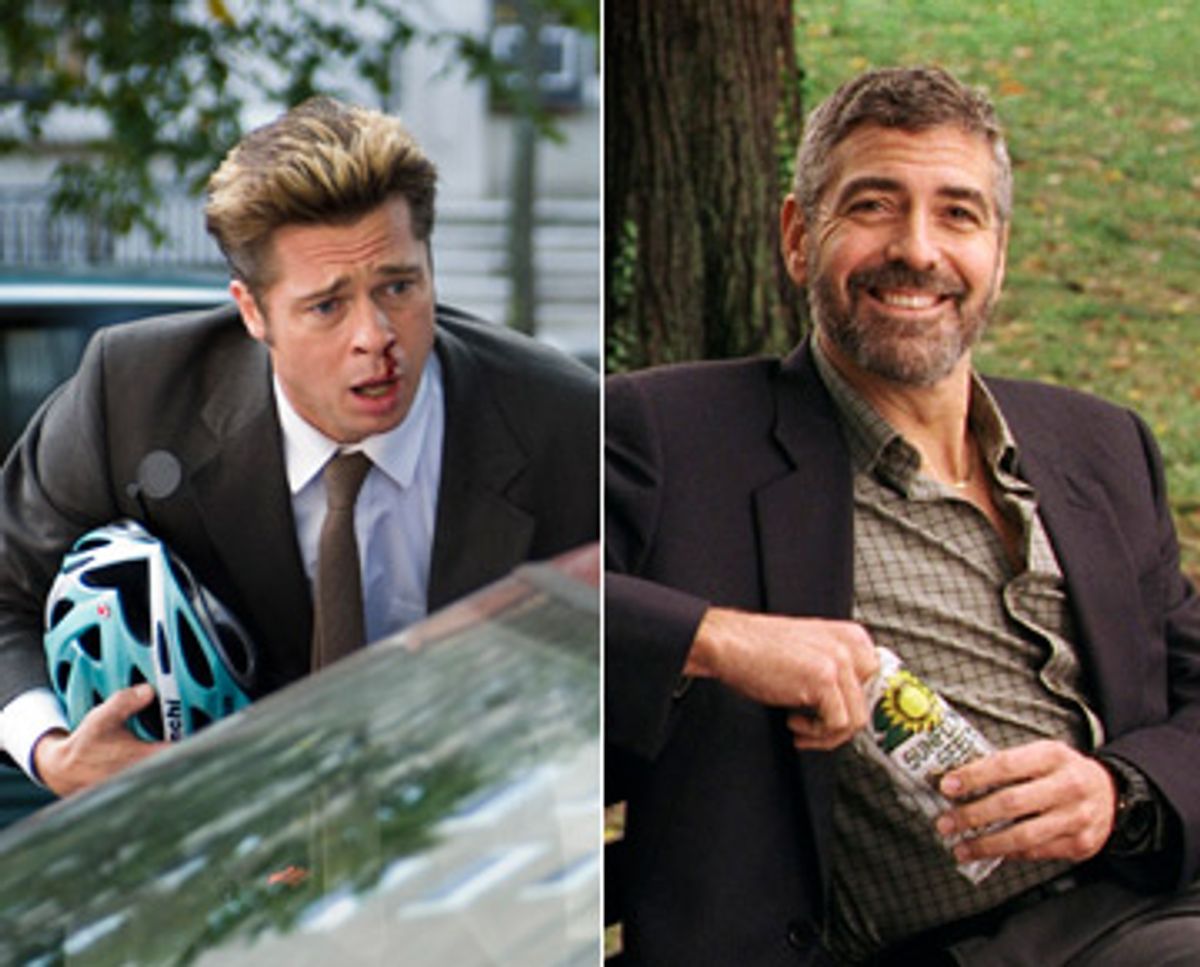 Brad Pitt, left, and George Clooney in "Burn After Reading."

Here's the right word to describe Joel and Ethan Coen's star-studded, pack-of-maroons spy comedy "Burn After Reading": It's patchy. Of course that sounds like I'm dismissing it, but I don't exactly mean it that way. The film is hilarious in patches, shocking in patches, utterly convincing in patches and close to brilliant in patches. As with the much-laureled "No Country for Old Men," the Coens seem to be Mixmastering themes and elements of their earlier films; there are traces of "Fargo," "The Big Lebowski" and "Blood Simple" in the DNA of "Burn After Reading." But those comparisons aren't likely to benefit this work of lightweight inside-the-Beltway misanthropy, which possesses neither the morbid, cinematic gravity of their better crime films nor the absurd delirium of their best comedies.

One could sit here and intone, film-critic style, that the Coens don't know anything about the world of Washington espionage professionals (most of the movie was actually shot in New York, with Brooklyn brownstones doubling for Georgetown) and that the movie's devoid of any likable or sympathetic characters. But since when have either of those factors been relevant to these guys and their peculiar and hermetic career? As we heard earlier this year at the Oscar ceremony, the brothers once made a Super-8 film at the Minneapolis-St. Paul airport called "Henry Kissinger: Man on the Go." And I for one would love to see it.

It's all fine and normal that the only source material for "Burn After Reading" is other movies about this much-mythologized milieu; what do you expect? There are some hilarious movie-movie nudges here, so small that most viewers will miss them: As we watch a pair of bespoke English men's shoes splacking importantly along a well-polished corridor, the on-screen title types out "CIA Headquarters" and then "Langley, Virginia" in little digital clicks -- and then deletes itself, with the same perfect sound effect. My favorite characters in this movie are the ones who seem borrowed wholesale from other movies, like J.K. Simmons' nameless and soulless upper-echelon CIA bureaucrat, a Strangelove-ian bottomless pit of cheerful evil whose only concern is murdering and bribing enough people to make this messy situation go away.

The messy situation in question, like most of the predicaments in which Coen movie characters find themselves, is a bad idea gone wrong -- one poisoned at the root by idiocy and then made worse by every poltroon who comes in contact with it. Everyone in the movie is thoroughly stupid and contemptible, but ascendant among them is Linda Litzke (Frances McDormand), the north-of-40 dim bulb who works as the assistant manager of a suburban Washington gym called HardBodies and whose only concern is the extensive plastic surgery she thinks she needs to capture a man. If there were any point in taking "Burn After Reading" seriously -- and if McDormand weren't married to Joel Coen -- one could point to Linda as an especially horrifying example of Hollywood misogyny. Maybe you still can, but of course the magic of casting McDormand is that she somehow makes this self-centered imbecile, who unleashes a violent and chaotic chain of events, seem like a spunky American-movie heroine.

Linda is the accidental secret agent who brings together a chain of other stupid and/or disagreeable people, beginning with Osborne Cox (John Malkovich, in aristocratic-volcano mode), the embittered, recently fired CIA analyst she tries to blackmail after his wife's lawyer's secretary loses a DVD of confidential data at the gym. Linda's co-conspirator is a fellow HardBodies team member named Chad, and if you've watched any non-Sarah Palin-related TV in the last two weeks, you've already gotten a taste of Brad Pitt with silly hair and a series of Spandex outfits and Madonna-ish dance moves, pretending to be a dumb ass who's pretending to be a guy who knows what he's talking about.

I'm of two minds about Pitt's performance here, which is superbly detailed and often very funny but becomes a kind of zany conceptual art piece, detached from the story the Coens are supposedly trying to tell. I'm not of two minds about how the character is written, however, because it's bizarre and almost cowardly. Chad is so thoroughly gay that he borders on homophobic stereotype, but his sexuality is never mentioned. If he's borrowed from another movie, it's one made decades ago, where the female protagonist has a nellyish but completely asexual boy-pal.

One leading man making an ass of himself evidently is not enough, so the Coens also give us George Clooney in bad jeans, off-the-rack Italian suits and a close-cropped beard, playing a U.S. marshal named Harry Pfarrer who's cheating on his wife with Katie (Tilda Swinton), the tightly wound, über-bitch who's married to Malkovich's Osborne Cox. Katie's clearly an idiot too, or she wouldn't entertain notions of divorcing Osborne and setting up housekeeping with Harry, whose only perceptible areas of aptitude are as an exercise fanatic and inveterate pussy-hound. Harry hooks up with Linda on an Internet date, not knowing that she's trying to sell a DVD of his other girlfriend's husband's memoirs to the Russians and ... well, you see where this is going, right?

No, of course you don't, and I suppose that's the point. The plot of "Burn After Reading" is purposefully nonsensical and, as Simmons' CIA chieftain observes philosophically, no one involved has any idea what's going on. There are ironic glimmers of humanity here and there; Harry and Linda actually like each other, and if they weren't egotistical buffoons trapped in a story that's about to take a startling left turn from light farce into violent nightmare, they might have a future together. But nobody in this movie has any kind of decent future, and in fact by falling momentarily into lust, these two losers are going to get a bunch of people killed for no particular reason.

Despite its often sophomoric humor -- the silly last names, Linda and Chad's endless string of malapropisms, a mysteriously comical portrait of Vladimir Putin -- beneath its surface "Burn After Reading" may present a bleaker portrait of human life than the brooding, smoldering "No Country for Old Men" or any other Coen film does. It's one thing to argue that people die for no reason and that the stronger idiots dominate the weaker ones; that's been the brothers' apparent worldview since "Blood Simple" (and perhaps since "Henry Kissinger: Man on the Go").

But in its uneven patchwork fashion, "Burn After Reading" reveals something different and perhaps more fundamental than that, something about the Coens' subversive or quasi-subversive relationship to movie conventions and to their audience. Beneath its movie star clowning, its awful-but-relatable heroine and its lightweight gags, "Burn After Reading" poses an implicit challenge to its viewers: Can you figure out why this comedy isn't very funny? Could that be because its central proposition is that the people in the theater are just as stupid, just as gullible, just as eager to be deceived as the people on the screen?

"Burn After Reading" is now playing in major cities, with wide national release to follow.