A fish-lipped Meg Ryan heads up an all-star cast in this sexless "Sex and the City" wannabe. 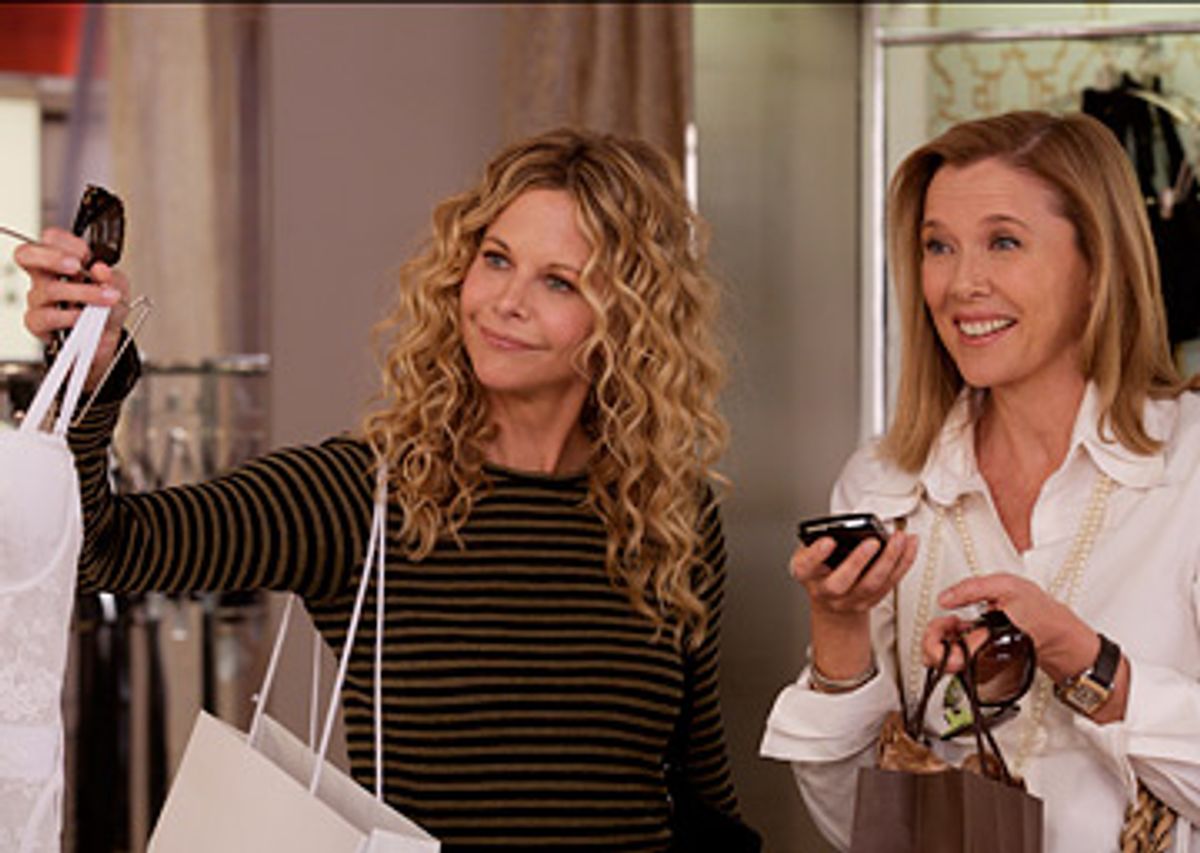 It's as if the world just woke up and discovered the female of the species lately. They're all running for political office and singing ABBA songs and whatnot. Estrogen -- it's the new black! We're so inundated with women, what better moment for a remake of "The Women," a movie that could make the Lifetime network seem butch?

Clare Booth's original play, the inspiration for the 1939 movie with the super-group cast of Joan Crawford, Norma Shearer and Rosalind Russell, was a notoriously catty meditation on the competitiveness and treachery of the fairer sex. The new version, boasting the most truth-in-advertising title since "Showgirls," features a similarly powerhouse cast of contemporary Hollywood A-listers.

As in the original film, at the center of the story is Mary, a one-woman plethora of female archetypes. She's played by Meg Ryan, and let's just get this out of the way: Ryan's face still looks weird. You'd think that, after all the trout-pout fuss of a few years back, her mouth would have deflated by now, but no. Ryan's blond mane is as tousled as it was at her "When Harry Met Sally" apex, but the rest of her head has morphed into something oddly fishlike.

Mary's a wholesome mother and part-time clothing designer who throws fundraising parties, weeds her own elegant Connecticut lawn and, oops, has a husband who's cheating on her. Swirling around the ostensible "plot" are "characters," middle-aged Barbie dolls with fabulous outfits and glamorous careers: There's the maternal one (Debra Messing, as overly fecund bohemian Edie), the flinty careerist one (Annette Bening, as magazine editor Sylvie) and the straight-shooting, sassy one (Jada Pinkett Smith, whose character is so clearly a lesbian she even has a man's name, Alex).

Yes, it's just like "Sex and the City, but without the sex. The only woman in "The Women" who's truly interested in getting laid is the man-stealing hussy who works a department-store perfume counter (Eva Mendes), and even she seems to be lusting for a platinum card more than anything else.

The rest of the characters are much too busy doing their incredibly womanly things to get bogged down in desire. They drink margaritas. They shop, preferably at Saks Fifth Avenue or for Dove skin care (if there were an Academy Award for shameless product placement, we'd have a winner). They cry and blubber and sniffle. They give birth. They all talk at once at increasingly high-pitched yip-yip-yips of hysteria. And they get manicures. Lots and lots of manicures.

In between cocktails and shopping sprees, a veritable chick-flick hall of fame -- Candice Bergen, Carrie Fisher, Cloris Leachman, Bette Midler -- drops in briefly to nibble the dainty furniture. These veterans have turned in many fine, funny performances in their careers. Here, though, the whole vibe is so shrill and frantic that the truly accomplished actresses, like Bening and Bergen, are left to flounder. The less nuanced ones -- that would be you, Debra Messing -- are, to use the idiom of the movie, as pleasant to watch as a bikini wax is to feel. Director Diane English is a television veteran: She created "Murphy Brown," but this is her first time at the helm of a movie, and perhaps that's why the film feels so desperate and hyper. There's none of the confidence that might have made this a warmer, more likable production. Instead, it's a film that makes you wonder what someone with Michael Bay or Oliver Stone's subtlety might have done with it.

The weirdest element of the film, though, isn't its fevered pitch. It's that these smart, successful, got-your-back best pals don't even notice they're living in a dystopian nightmare where men are invisible. There are no males eating in the restaurants, attending business meetings or even walking the streets of Manhattan. Yet these invisible creatures still wield frightening power. Husbands, like Mary's, lie and cheat -- or, like Edie's, simply move out of the apartment to get a break from the kids. Bosses and fathers loom large, ready to cut the ladies loose for failing to meet their expectations. Men are at once irrelevant and omniscient, and I'm not sure which gender that insults more.

The original, bitchier, less girlfriendy version of "The Women" was a product of a less empowered era. This new version is meant to reflect how far we've come, with ads encouraging us to gather our friends and see it together. Of course the filmmakers want to rally female viewers en masse, because you can be damn sure that nothing with a penis is getting anywhere near this thing.

And yet, contrary to what Hollywood or Washington or Madison Avenue may believe, women don't, in fact, possess a hive mind. We don't all like yoga and eat sticks of butter when we're depressed, and we don't all travel in packs to see crappy movies. Human nature is complicated like that. Why isn't my gender rioting in the streets over this femmey stereotyping BS? I can only hope it's because we've got our hands full fending off the widespread belief that we'll put anybody with two X chromosomes in the White House.

Midway through the film, Mary's mother coolly suggests that she ignore her husband's philandering until he comes to his senses and ends the affair. Aghast, Mary asks, "What do you think this is? Some kind of 1930s movie?" Lord, if only. Those tended to be well-written and funny. But if this is the year that females at last have the opportunity to prove themselves at the highest levels of achievement, then "The Women" is a triumph of sorts. Let the record show, then, that a movie written by, directed by and starring women can suck just as mightily as anything any bunch of men could produce. You go, girls. Preferably as far away as possible.