What you need to see, read, do this week: A YouTube survey of Sarah Palin; the ordeal of a lost kayaker; lessons about love and marriage. 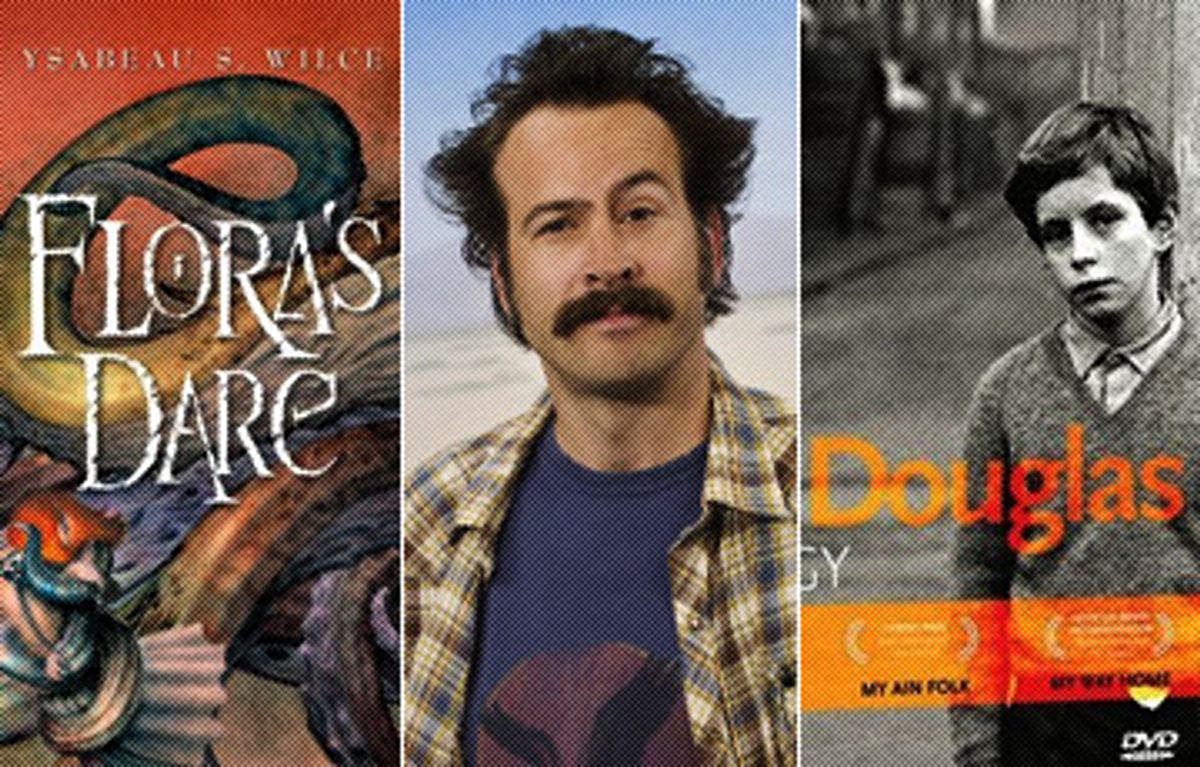 Sarah Palin on YouTube
Sarah Palin feels like a channel that's on all the time. A channel we can't turn off, even though we know there's better programming somewhere on the dial. There she is on "ABC News With Charles Gibson." There she is on "The Daily Show". The "Sarah Palin" search on YouTube turns up 16,500 videos (and climbing). Choice selections include Palin's controversial speech at an Alaskan Assembly of God church, in which she calls the Iraq war "God's plan," jokes about the Jesus fish tattoo her son got on his ankle, and tells the crowd, "You guys are all a cool-looking bunch of Christians." (Later, in a second video, they pray for an Alaskan pipeline.) You can watch Matt Damon and Pamela Anderson slag Sarah Palin. You can watch Sarah Palin slag the office of vice president. You can watch hastily made satires. You can watch an old appearance on Craig Ferguson's "Late Late Show," in which Ferguson says of her, "Is it just me, or do you get a kind of naughty librarian vibe from the governor?" Oh, there is so much to watch. Sarah Palin is a politician for the age of Google and YouTube. Now, if only her 15 minutes would run out. -- Sarah Hepola

"Solo: Lost at Sea" on National Geographic
In January of 2007, Andrew McAuley attempted to navigate a one-man kayak 1,000 miles across the Tasman Sea, from Australia to New Zealand. Leaving his wife, Vicki, and young son behind in Australia, McAuley, 39, recorded his trip on an onboard video camera, recounting long days of paddling and long nights tossed by enormous waves. National Geographic's "Solo: Lost at Sea" (10 p.m. EDT, Monday, Sept. 15) provides a harrowing and detailed picture of McAuley's trip with a mix of footage from the kayak and first-person interviews with his family and friends. After spotting two great white sharks, hunkering down for a massive storm with 10-meter waves, and struggling with his emotions over having left his family behind, McAuley finally vows never again to take such an enormous risk. If you're the kind of person who read "Into Thin Air" in one sitting, you'll want to catch this fascinating look at McAuley's long journey. -- Heather Havrilesky

Juliana Hatfield's "This Lonely Love"
It's been 15 years since Juliana Hatfield's spastic singalong to sibling love/hate, "My Sister," ruled the radio, introducing the culture to her combination girlish vocals, big pop guitar and caustic lyrics -- a frosted jelly doughnut spiked with tequila. At 41, with the release of her 13th solo record, "How to Walk Away," Hatfield's tortured youth is well past. Her voice now resembles less that exuberant squeal than a lovely, fluid sigh. The first single, "This Lonely Love," puts it to excellent use, contrasting it with a jaunty rhythm section and atonal delivery from Richard Butler (Psychedelic Furs). But the idea behind the song -- that our greatest joys almost inevitably leave us unfulfilled -- is what gets into your head. If Hatfield's first blast of success came by channeling adolescent angst, this and other songs on her new record suggest she's even better with the very adult feelings of regret and resignation that come from having lived. -- Kerry Lauerman

"The Girl With the Dragon Tattoo" by Stieg Larsson
Stieg Larsson, a Swedish journalist, wrote three linked novels before his untimely death in 2004, at the age of 50. "Girl," the first of the three, is about a disgraced financial reporter who takes on a private commission, holing up in a cabin on a remote island owned by a family of wealthy industrialists to write the family's history. That history includes the mysterious disappearance of a 16-year-old girl 30 years earlier, and the true story isn't pretty. There's something about the flinty stoicism of the Scandinavians that lends a distinctive, habit-forming melancholy to this kind of story; I was reminded of "Smilla's Sense of Snow," but in this case the oddball heroine is the reporter's confederate, a multiply pierced superhacker with an appropriately Nordic taste for vengeance and other forms of rough justice. -- Laura Miller

"David Lean: Ten British Classics"
Before he became the Oscar-collecting spectacle filmmaker of the 1960s with the wide-screen vistas of "Doctor Zhivago" and "Lawrence of Arabia," David Lean was already the best-loved and most technically accomplished British director of his generation. "David Lean: Ten British Classics," a new traveling retrospective organized by the British Film Institute to commemorate Lean's centenary, offers meticulously restored prints of his output from the 1942 war-propaganda flick "In Which We Serve" (scripted by and starring Noël Coward) to the 1953 working-class comedy "Hobson's Choice." Call it an instant survey of commercial British cinema at its artistic pinnacle. You'll find a few acknowledged masterpieces here, including the Coward-Lean interwar family melodrama "This Happy Breed," shot in Technicolor and arguably the finest of all World War II home-front films; Coward's "Brief Encounter," a much-imitated and much-mocked black-and-white mood piece about unconsummated adultery; and the 1946 "Great Expectations," still the gold standard for Dickens adaptations. But Lean's lesser-known films are the real discoveries, including two made with Ann Todd, the eerily angelic blonde who became the second of his five wives: the 1948 love triangle "The Passionate Friends" and the 1949 Victorian melodrama "Madeleine." Others not to miss are Lean's 1948 "Oliver Twist" (troubled as it is by Alec Guinness' gruesomely anti-Semitic performance as Fagin) and a 1945 Technicolor adaptation of Coward's comedy "Blithe Spirit." "David Lean: Ten British Classics" continues through Sept. 25 at Film Forum in New York, and opens Sept. 19 at the Pacific Film Archive in Berkeley, Calif., Oct. 2 at the Wexner Center in Columbus, Ohio, Oct. 3 at the Northwest Film Center in Portland, Ore., and Oct. 10 at the UCLA Film & Television Archive in Los Angeles, with dates upcoming at the Gene Siskel Film Center in Chicago, the National Gallery in Washington, the Cleveland Cinematheque and the Museum of Fine Arts in Houston. More cities will follow. -- Andrew O'Hehir

"Two Marriages" by Phillip Lopate
"Two Marriages," Phillip Lopate's first work of fiction in 21 years, is a double wedding of novellas that examine, with hilarity and tenderness, the notion that love is more or less a con game. We can only hope it's far less of a charade than the matrimony of adjunct philosophy professor Gordon and his Filipina bride Rita in the first story, "The Stoic's Marriage." Gordon, a stocky, obtuse academic, begins a diary to record the bubble of bliss he's entered into after marrying Rita, a nurse who took care of his dying mother. The bubble soon bursts, as his new wife clues him in on a number of important facts about her life, including (but not limited to) the revelation that she has another family in the Philippines. Meanwhile, Gordon ponders the Stoics, a group of Greek thinkers who believed in accepting life's vicissitudes wholesale. "To accept what is dealt you, to love your fate (amor fati) instead of railing against it, became my ideal and remains so," Gordon declares. Easy to say on Page 32 -- by the outrageous events that lead to page 170, not so much. In "Eleanor, or, The Second Marriage," a couple who have both married for the second time throw an elaborate Brooklyn, N.Y., dinner party -- don't worry, Lopate cuts any potentially irritating bourgeois frivolity with wry humor -- and afterward the two discover that their second time around isn't exactly what they thought it would be, and that they may have to make compromises they never expected. Love may be a sham, these two smart and warm stories remind us, but sometimes we benefit from getting ripped off.-- James Hannaham