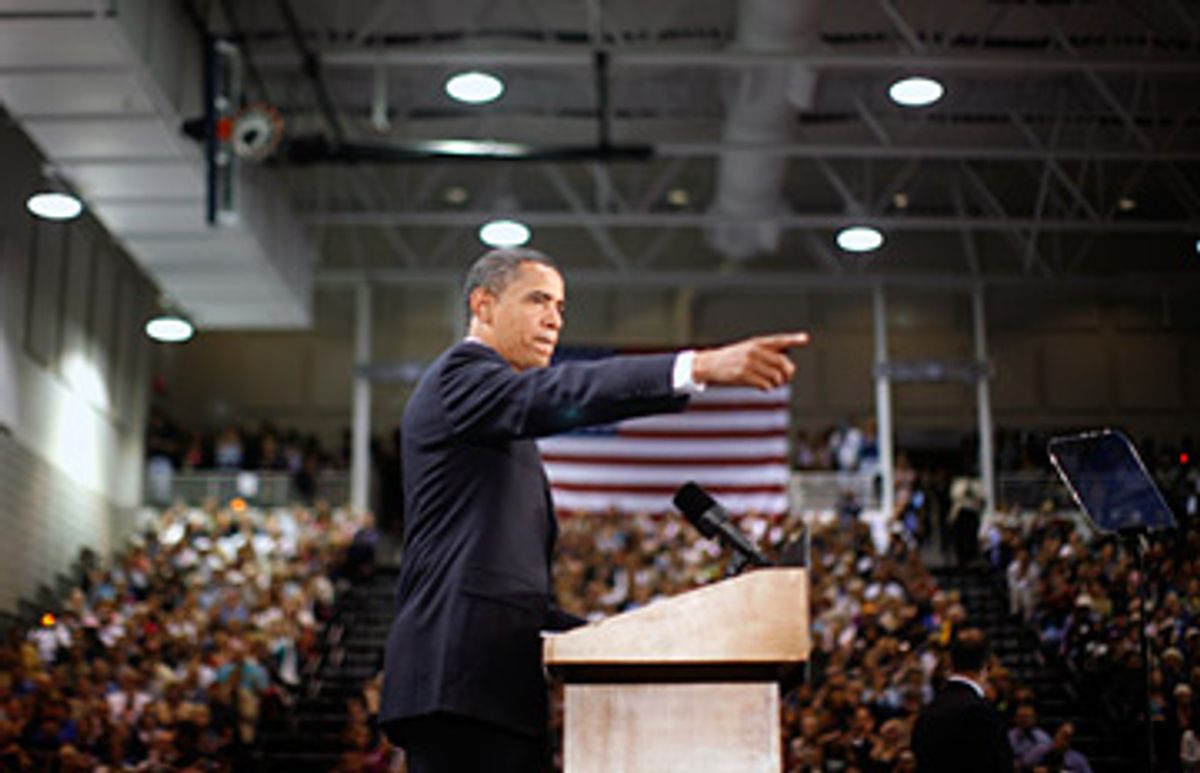 Launching punches against John McCain as hard as any he has yet delivered, while laying out a clear explanation of what his plans for a "21st century regulatory system" entail, Barack Obama gave his most forceful speech on the economy so far in this campaign, Tuesday morning in Golden, Colo.

He picked a good time to do it. With Wall Street in turmoil, major financial institutions declaring bankruptcy or being swallowed up by their competitors, unemployment rising, consumer spending falling -- and one day after the sharpest drop in the U.S. stock market since Sept. 11 -- the state of the economy is on the front burner as never before in this presidential campaign.

So let's be clear: what we've seen the last few days is nothing less than the final verdict on an economic philosophy that has completely failed.

That is a bold statement, and the pushback from the right will be fierce. At this very moment, an argument over how Wall Street should be regulated, and who should be blamed for the current financial crisis, is raging among economists and political pundits across the spectrum, with a heat that will fry your computer monitor if you're not careful. Republicans blame Democrats for encouraging too much home loan ownership under Clinton, while Democrats blame the party of Phil Gramm for loosening oversight over Wall Street and utterly ignoring the potential havoc posed by new complex financial products such as credit derivatives. Nobody comes out of this free-for-all unscathed.

But even if each party bears blame for both good and bad regulatory impulses, there is also at stake in this election a fight over fundamentals. There is a philosophy that says markets left to themselves perform best, and a philosophy that argues that well-regulated markets are the key to a strong economy. If the events of the last year and a half have achieved anything, they have at the very least profoundly weakened the argument that says Wall Street is best left to handle its own affairs without sensible supervision. When Obama refers to an economic philosophy that has "failed," this is what he is talking about: The theory that markets are perfectly self-correcting, that the best government is the government that lets the rich do as they please, and prosperity will trickle down to everyone else, has taken an enormous body blow.

One can quibble with Obama's continued references to the economic philosophy of the last "eight years," as if the Bush administration existed in some kind of vacuum, unconnected to either the Clinton years or the Reagan years. That's not the true picture -- the economic philosophy that is sagging has been dominant for at least 28 years, and not just eight. Perhaps Obama doesn't want to alienate Reagan Democrats, and perhaps he doesn't want to acknowledge the contributions made by Clintonomics to the Wall Street party.

But that's immaterial to the major focus of his speech, which was to identify McCain with the deregulatory ideology of the mainstream Republican Party, in contrast to McCain's own self-image as a "reformer." Obama makes a pretty good case.

This March, in the wake of the Bear Stearns bailout, I called for a new, 21st century regulatory framework to restore accountability, transparency, and trust in our financial markets. Just a few weeks earlier, Senator McCain made it clear where he stands: "I'm always for less regulation," he said, and referred to himself as "fundamentally a deregulator."

Democrats looking for some signs of pugnacity from Obama will also likely be encouraged by some of Obama's jabs:

Last September, I stood up at NASDAQ and said it's time to realize that we are in this together -- that there is no dividing line between Wall Street and Main Street -- and warned of a growing loss of trust in our capital markets. Months later, Senator McCain told a newspaper that he’d love to give them a solution to the mortgage crisis, "but" -- he said -- "I don't know one."

...Senator McCain's approach was the same as the Bush Administration's: support ideological policies that made the crisis more likely; do nothing as the crisis hits; and then scramble as the whole thing collapses.

Is that fair? I think so. There has been nothing proactive about either Bush's or McCain's economic proposals. Both politicians would prefer to say as little as possible about ill economic winds, unless forced to by events so great that they simply must be addressed. Both take as a starting point, rhetorically, that less regulation is better than more regulation. It's a tough position to maintain when Wall Street blows up.

It's important to make a distinction here between less and more regulation, and good and bad regulation. The libertarian-leaning economist Tyler Cowen published a provocative piece in the New York Times on Monday, arguing that despite George Bush's rhetoric, during the last eight years we have actually witnessed an increase in regulation. Cowen's argument is that the real problem is that we have a lot of bad, inconsistent regulations, administered by overlapping jurisdictions, that don't fit the requirements of modern markets.

That is undeniable. But is the answer to reduce regulation or replace it with better regulation? The McCain position, historically, has been to reduce regulation, and nothing exemplifies that better than his closeness to Phil Gramm, who, more than any other single politician, has been critical in ensuring that the new world of complex financial products, such as credit derivatives, stayed out of bounds for government regulators.

I'm not sure that Cowen and Obama agree on a lot of things but Obama's call for more transparency and a streamlined regulated framework aren't too far off from Cowen's, and they are directly aimed at dealing with the world as it is now, not as it was 30 years ago.

The American economy does not stand still, and neither should the rules that govern it. The evolution of industries often warrants regulatory reform -- to foster competition, lower prices, or replace outdated oversight structures. Old institutions cannot adequately oversee new practices. Old rules may not fit the roads where our economy is leading.

Explicitly: Obama declared that if you're "a financial institution that can borrow from the government, you should be subject to government oversight and supervision." That means investment banks and insurance companies looking for handouts, and not just the commercial banks previously subject to rigorous government regulation, will have to let regulators take a closer look at their books. In an era where all financial institutions seem to have their fingers in every pie, this proposal makes obvious sense.

"... Particularly for complex financial instruments like some of the mortgage securities and other derivatives at the center of our current crisis. We must develop and rigorously manage liquidity risk. We must investigate rating agencies and potential conflicts of interest with the people they are rating. And we must establish transparency requirements that demand full disclosure by financial institutions to shareholders and counterparties.

This is not lefty boilerplate. These are specific recommendations that cut to the heart of what we have seen go awry over the last year: Wall Street institutions using borrowed money to bet on financial products so complex that, to this day, few people understand how they work, or what the consequences of their imploding value will be. Stronger capital requirements and increased transparency are recommendations you can hear from many critics of Wall Street who labor within the belly of the beast.

A few broadsides at McCain, a bullet point list of both long-term and short-term proposals to address the American economy, delivered precisely at one of the greatest stress points in the American, and possibly global, economy in decades. I guess now we wait and see if anyone is paying attention.