Todd Palin has exerted unusual influence on his wife's Alaska government. In Washington, their methods would do Bush and Cheney proud. 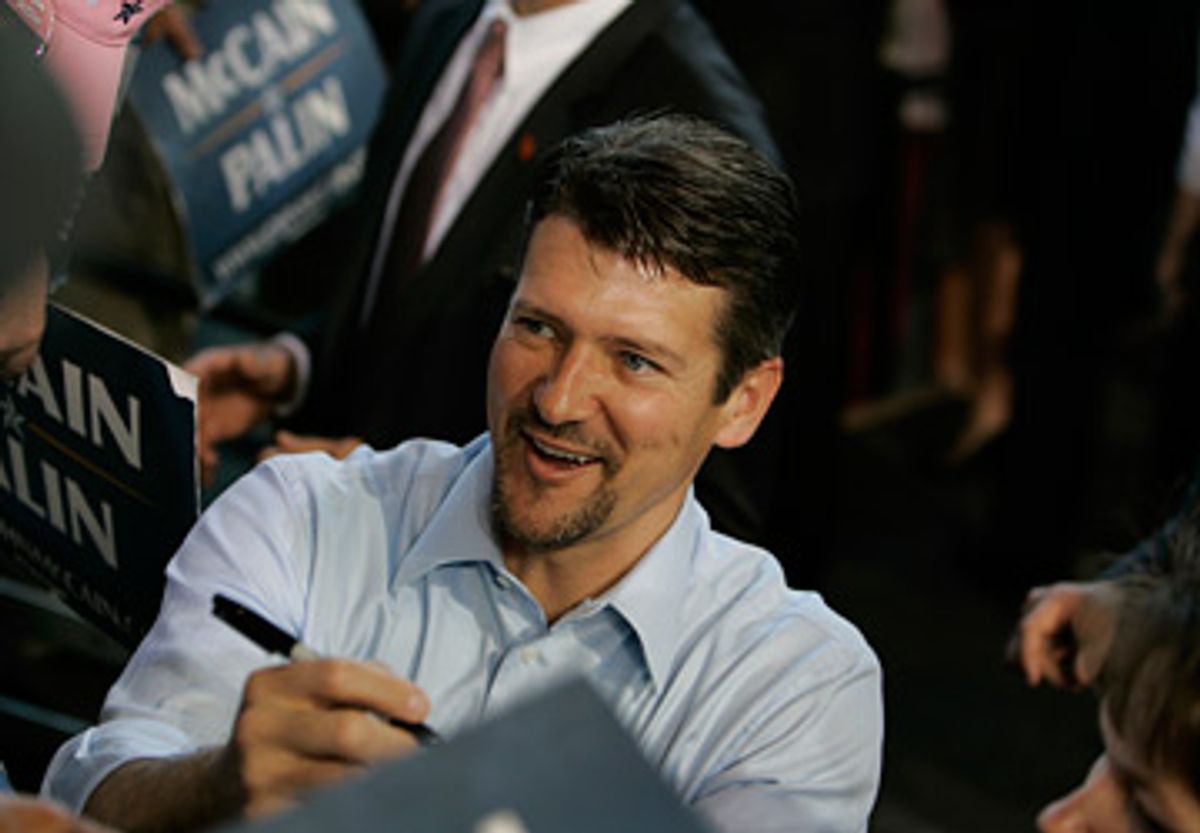 Not long after Sarah Palin was sworn in as Alaska's governor in December 2006, her husband, Todd, started showing up in the state capitol in Juneau. He'd hang around her office, or he'd sit in on meetings with Cabinet officials or legislators. He'd leave for a few weeks to go work his $100,000-a-year oil job on the North Slope, then come back to Juneau (or Anchorage, depending on where Palin was spending her time). At some point, the "First Dude" became enough of a fixture in the statehouse that people just sort of figured he belonged there.

Soon, Todd Palin was getting copied on e-mails dealing with official state business. He had already helped write the state budget, gotten involved in personnel matters and called up lawmakers when he -- or Sarah Palin -- had a bone to pick with them. Apparently Palin's inner circle figured they better include him on messages about pending legislation or ongoing controversies, too. The First Dude's involvement in Palin's efforts to get her ex-brother-in-law fired from the state police force have now earned him a subpoena from the Legislature, and he also allegedly intervened to have John Bitney (a former friend) fired from the state payroll for having an affair with the ex-wife of one of Todd Palin's buddies. The Washington Post reported last week that the Palins billed the state $1,371 for Todd's airfare to Washington, when he joined Sarah Palin at a National Governors Association conference, and for the whole family to fly around Alaska watching him compete in the Iron Dog snowmobile race.

In the Palin administration, Todd appears to have had an unusually strong role, the extent of which remains unclear. He is not on the state payroll and was never elected -- but the First Dude has crossed over from the standard-issue supportive political spouse to something far more influential, weighing in on policy and political matters in ways that few observers seem to understand. His apparent influence in his wife's administration -- some in Alaska have referred to him as the "shadow governor" -- has raised questions about whether a Sarah Palin vice-presidency would hand the same type of backstage power to Todd, and what that might mean in the running of the U.S. government.

No one has accused Todd Palin of interfering in state business for his own personal benefit -- instead, the situation has remained somewhat inscrutable, if not odd. According to local politicos and observers, he lurks around the capitol if he doesn't have anything better to do, which, since he works seasonal jobs in oil and fishing, is fairly often.

John McCain's campaign didn't answer a request for comment on Todd Palin or what his role in the Palin administration might indicate about how he'd be involved if McCain and Palin win the election.

In Sarah Palin's political profile and governing methods, critics see a direct political heir of George W. Bush. And Todd Palin's behind-the-scenes strength is one way in which Palin's Juneau administration appears to mirror that of Bush and Cheney -- with its proclivity for secrecy and cronyism. Sarah Palin has used a private e-mail address on most of the e-mails her husband was copied on, and reportedly was advised by aides that such nonofficial communications could be protected from potential subpoena. Legislators and political insiders in Alaska say a small circle of trusted Palin aides keep most decisions and deliberations close to the vest, with Todd Palin among them. These maneuverings may sound quite familiar, if you recall Bush staffers using private Republican National Committee e-mails instead of whitehouse.gov accounts, or the faith George Bush has put in trusted advisors to work closely with him in private, even when they don't seem up to the job.

The extent of Todd Palin's involvement in state business only began to come into view recently, when a conservative critic of the Palin administration used Alaska's public records laws to request copies of e-mails sent by two of her closest aides about state business. The activist, Andrée McLeod, is a Republican gadfly in Anchorage and an on-again, off-again state employee herself; she worked in Alaska House Speaker John Harris' office during the last legislative session. She was once a friend of Sarah Palin's -- the two worked together when Palin was on the state's Oil and Gas Conservation Commission to expose conflicts of interest by the chairman of the Alaska Republican Party, Randy Ruedrich. ("Though she ruffles a feather or two now and again, this intelligent Alaskan is exactly what we need during these times," Palin had said of McLeod, a quote that McLeod used in a campaign flier for a failed 2004 bid for the Anchorage school board.)

Now McLeod says Palin is using government time and resources to pursue political goals -- the same thing the two of them accused Ruedrich of doing. But when she requested copies of administration e-mails, Palin's office redacted most of what they turned over, and refused to turn over more than 1,000 messages, citing executive privilege. Todd Palin got a copy of about 40 of those messages, though -- which makes it hard to figure out why other members of the public can't also have them. "This whole [notion of] open, transparent, honest ethical government is bogus," McLeod told Salon. "Her rhetoric has been shown to be bogus."

What Todd Palin's role seems to underscore is the extent to which his wife has run Alaska without engaging in the normal machinations of government. Insiders say Palin pays scant attention to the day-to-day workings of the bureaucracy that employs about 15,000 people. John McCain's campaign has used that number of employees to talk up Palin as having the executive experience necessary to be vice-president, or president -- but critics say she hasn't displayed an understanding of the details needed to manage even a state as sparsely populated as Alaska. "As far as her governing ability goes, it's a learning curve," says House Speaker Harris, a Republican who has clashed with Palin since she took office. "I think she's trying to learn, and that's one of the problems of somebody who comes from the outside -- completely from outside government, or state government, and maybe even federal government, for that matter."

Democratic Les Gara, a state representative in Alaska, says that Palin is too detached from the job to do it well. "I do not believe that she's paid enough attention to the details of policy and how government works and the issues facing the state to run the nation," Gara says. "It's not her lack of experience -- I think a smart person who's really engaged and really curious can be in national office [without experience]. It's the lack of curiosity on the day-to-day workings of government that I've got the concern about."

However much she may or may not grasp the political system in Juneau, Palin has apparently given her husband much opportunity to insert himself in state business whenever the two see fit. Will she operate the same way if she finds herself in Washington?