So much about the Obama-McCain contest breaks the mold -- yet the electoral map is looking eerily familiar. 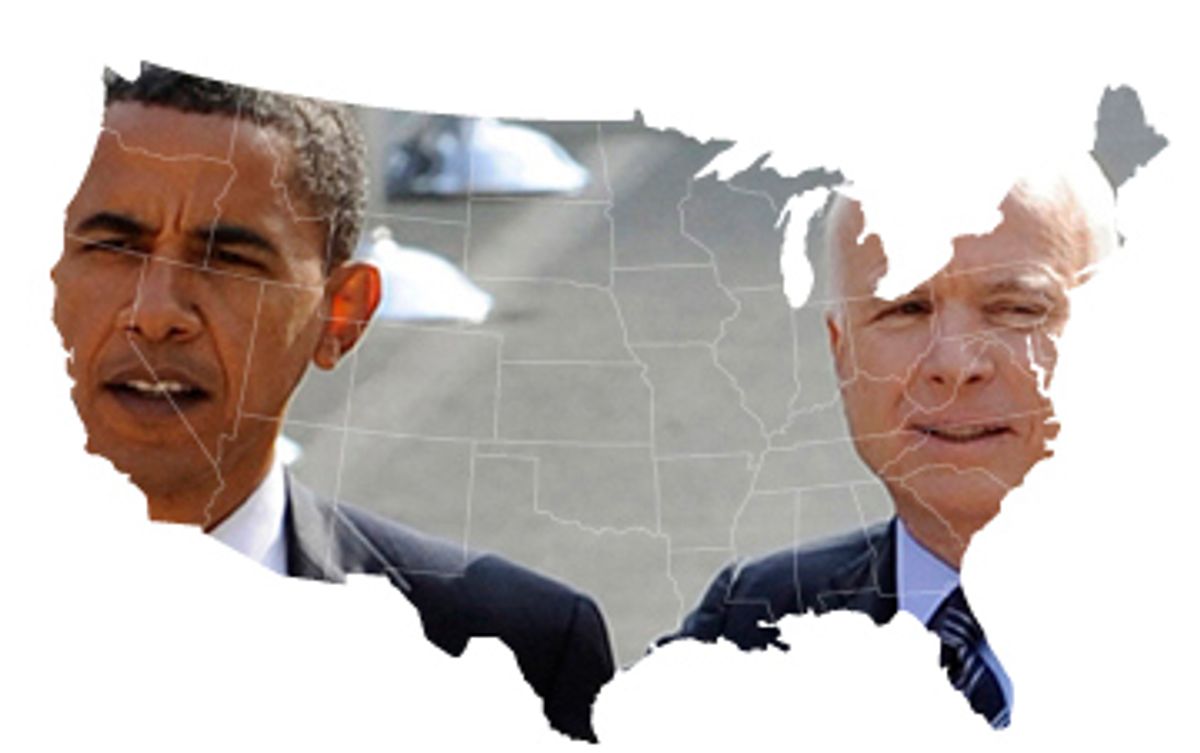 Donald Rumsfeld may have been a disastrous wartime defense secretary, but he did leave behind an invaluable field manual for understanding this year's presidential race. Rumsfeld unveiled his analytical superstructure during a February 2002 press briefing when he mused on the "known knowns," the "unknown unknowns" and the especially useful "known unknowns." With little more than six weeks remaining on the political calendar as summer gives way to pumpkin weather (Sarah Palin is a surefire Halloween costume with bipartisan appeal), Rummy's Ruminations are the best way to understand the mysteries involved in winning the hearts and minds of the American voters.

The known knowns
These are the familiar, but sometimes half-forgotten, aspects of the preexisting political landscape. The stunning unanimity of George W. Bush's unpopularity is a political constant -- in every national poll taken since April, less than one-third of the voters approved of the president's record in office. (OK, to be technical, Bush hit a dizzying 34 percent in one survey, but has been under that mark in 62 other polls.) Even before Wall Street was vaporized this week, fewer than 20 percent of the voters believed that the country was heading in the "right direction."

What this means in political terms is that the only way that John McCain should be able to win the White House is under an assumed name or political party. He has, of course, tried to do both in recent weeks by all but changing his moniker to Palin and pretending that he is not a member of any organized party, but rather is a "maverick." (Of course, neither Bret nor Bart Maverick of 1950s TV fame completely reversed their positions on the Bush tax cuts to please the GOP base.) A Pew Research Center national poll released Thursday found that McCain's zealous efforts at rebranding have failed to convince 45 percent of the voters who stubbornly believe that he would "continue Bush's policies."

The unknown unknowns
This is not a euphemism for a pre-election terrorist attack. It is just a reminder that the unforeseen happens in presidential campaigns far more often than the prediction-prone television pundits ever admit. In the final two weeks before the 1956 election, the Hungarian people vainly revolted against Soviet rule, and Israel (along with Britain and France) went to war with Egypt over the Suez Canal. None of these clashes of titanic forces, by the way, prevented Dwight Eisenhower from rolling to his second landslide victory over Adlai Stevenson.

Now all the glib fall campaign scenarios have to be adjusted to take into account the sad-eyed necessity to sit shiva over the financial community. With the Dow Jones average gyrating more than 400 points each day, it is difficult to get a handle on how voters will eventually react to this Black September in the markets. But what we do know is that one of the biggest lies in politics is when a pollster begins a question by saying, "If the election were held today ..."

The known unknowns
Political reporters love historical analogies (and, yes, I plead guilty as well) because they provide intellectual gloss, offer the reassurance of supposedly repetitious patterns and -- most important -- cannot be factually disproven until Election Day. A common theory is that the polls will remain close until after the debates, as they did in 1980, and then break wide open when the challenger (Ronald Reagan then, Barack Obama now) eliminates doubts about his experience. The contrary notion is to equate Obama with Michael Dukakis in 1988 as an overintellectualized candidate who could not bridge the cultural gap with blue-collar voters in an election that the Democrats should have won.

The biggest "known unknown" is whether this will be a sui generis election as unique as the personal biographies of Obama and McCain. The media environment is, of course, vastly different because of everything from YouTube and text messaging to the often-ignored reality that roughly 20 percent of the voters do not watch any TV commercials because of TiVo and other recording devices. This is also the first election since Lyndon Johnson's landslide in 1964 when the Democrats are the Daddy Warbucks party and the Republicans are the ones scrambling for campaign cash.

Yet for all the Obama campaign's once bold talk about a nearly 50-state strategy with even Georgia and Alaska (ha!) in play, the electoral map of contested terrain is beginning to look eerily similar to 2000 and 2004. The only other modern elections that were near mirror images of each other were the "I Like Ike" contests in 1952 and 1956. Sure, Virginia (mostly because of the population bulge in the Washington suburbs) is in play and Democrats are nurturing long-shot hopes in places like Indiana. (A new Indianapolis Star poll gives Obama a narrow lead in a state that has been reliably Republican since 1964.) But the mystery of 2008 is whether America remains a 50-50 red-blue nation and Election Night will again come down to razor-edge states like Ohio and Wisconsin.

Another difficult-to-handicap factor is whether McCain's reinvention will trump Obama's consistency. Usually about now it is the Democrat (think Al Gore with three different styles in the three 2000 debates) who is undergoing a personality transplant with his campaign handlers performing the operation. But rarely has there been as drastic or as cynical an overhaul as the one starring McCain in a docudrama titled "The Remaking of a (Would-Be) President 2008." Who could have imagined that different-drummer McCain would emerge as a press-conference-avoiding, media-baiting, fact-fabricating generic Republican?

Obama, meanwhile, in a triumph of self-confidence (or hubris), has resisted Democrats' pleas that he do something, anything different to reverse the momentum that shifted McCain's way after the Palin pick. It is a tad ironic that the candidate of change has been running pretty much the same campaign since early 2007. Obama may prove a tough sell along the Bitter Voter Belt from Pennsylvania to Wisconsin, but he has pretty much inoculated himself against the charges of politically expedient inauthenticity that dogged both Gore and John Kerry.

Donald Rumsfeld -- for all his artful theories about what can be known in a military conflict -- tragically misjudged the extent of Iraqi resistance. What he lacked, of course, was a sense of his own limitations. An election campaign should never be mistaken for warfare, no matter how viciously partisan the political gamesmanship becomes.

But in the end, political reporters and pundits need to leaven their judgments with that quality that Donald Rumsfeld so grievously lacked -- humility. Because little in the 2008 race has followed any known formula -- remember that both presidential nominees were underdogs going into the primaries -- the best approach is not to try to theorize your way into the future. The only safe bet is that none of us (not the campaigns, not the press pack, not the political mavens on the sidelines) can possibly reckon all the unknowns headed our way between now and Election Day.