Obama in New Mexico: No Latino voter left behind

In the most closely contested state in the nation, it will all come down to who is better organized -- and whether Obama can get Hispanic voters to the polls. 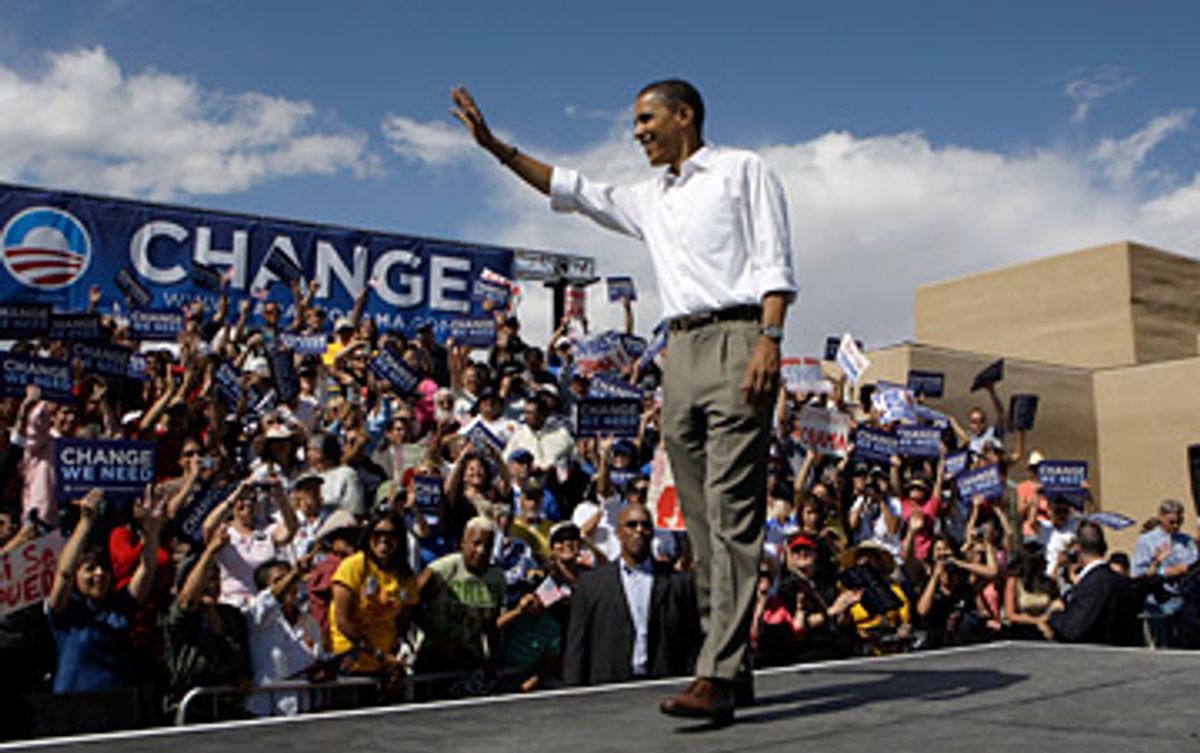 For a few hours Thursday, Barack Obama doubled the size of this town. About 9,500 people live here, in the heart of Hispanic northern New Mexico; around midday, about 9,500 people were crammed into a historic plaza near the Rio Grande for a rally, according to campaign aides and local officials. And if Obama's strategy to win the White House through the West is going to work, his supporters are going to have to get used to pulling off that kind of turnout. It looks like New Mexico -- and its five electoral votes -- are going to go to whichever side does a better job organizing.

No state has seen presidential elections as consistently close as New Mexico the past two cycles -- Al Gore won it by 366 votes in 2000, and George W. Bush took it back by 5,988 votes four years later, the margin still less than 1 percent of the total vote. Now Obama leads John McCain in most recent polls by a few points, but Democrats and Republicans alike say they think the final margin could be as tight as it has been in the past. Both campaigns are advertising heavily here; the Wisconsin Advertising Project estimated McCain spent $214,000 on TV in New Mexico the week after his convention, Sept. 6 to 13, while Obama spent $155,000 in the same time period. But with fewer than 3 million residents, grass-roots organizing might make more of a difference.

Latinos will almost certainly put whoever wins over the top; the state's electorate is about 40 percent Hispanic. McCain and Obama are each blaming the other for failed immigration reform legislation in Spanish-language ads here, though both of them are making some dubious claims in the messages. (In New Mexico, with a large native-born Hispanic population whose roots date back to the 16th century, and where many Latinos watch English TV, immigration may not resonate as much as economic issues.) "The Hispanic vote in New Mexico, Colorado and Nevada is gonna decide this election," Gov. Bill Richardson told the crowd before Obama spoke. "And Hispanics are gonna vote for Barack Obama, right?" Obama's campaign had made an effort to connect with the local Latino crowd: A mariachi band played before the rally got started, and inside the security perimeter vendors were doing a brisk business in tamales, flautas and burritos. It might have worked. "He represents the middle class, he's a minority," said Tommy Martinez, 23, a school counselor from Española who just registered at his new address to make sure he could vote in November. "McCain just seems like he'd be more of the same."

Obama's visit this week, and what he did while he was here, underscored the way this election could be different from the last two. Instead of focusing on Albuquerque or Santa Fe -- the state's biggest cities by far, and the home to most of the Democratic base -- the campaign headed north in search of the small-town Latino vote (though Gov. Richardson did host a $28,500-per-person fundraiser for Obama back in Albuquerque later Thursday). On his way to the rally in Española (at which he arrived nearly two hours late), Obama stopped in Bernalillo, population 6,600. "We are committed to aggressively reaching out to rural voters," the campaign's state director, Adrian Saenz, told me.

That's because the rural parts of the state are where Obama has the best chance to find more votes than John Kerry got last time. Polls show Latinos in New Mexico (and in other battleground states) are backing Obama over McCain by enormous margins, so Obama's campaign is focusing on turning out as many of them as possible. The relatively densely populated northern part of the state -- where some counties are more than 60 percent Hispanic -- is the top target. "There's real pressure on what you do in the Hispanic community," said Democratic pollster Paul Maslin, who worked for Richardson's presidential campaign. "Every extra point that we can get in terms of either turnout or voter preference ... cushions against that more conservative Anglo population."

Already, Obama has 34 offices open around the state. "We only have 33 counties in New Mexico," marvels the state Democratic Party chairman, Brian Colón. Places like Hatch, N.M., which officially calls itself a village, and where only 1,644 people live, have field operatives and volunteers working there, contacting residents and finding potential supporters. "What we've built in these battleground states is what would be considered a very large Senate or governor's race in these states," Obama's campaign manager, David Plouffe, told New Mexico reporters this week.

Four years ago, in contrast, Kerry never had more than five offices. (McCain's campaign, working with the state Republican Party, has five open now, and the party spokeswoman, Shira Rawlinson, says more will open soon.) Saenz, who worked on Hispanic outreach for the Democratic Party's field organization in 2004, says there's barely any comparison between the two efforts. "We're a lot further ahead organizationally," he said. "Our staff was on the ground and our offices around the state were up and running a lot earlier this year than they were in 2004."

So far, though, that work hasn't yielded immediate results. As of last week, there were about 13,000 more Democrats registered to vote than were registered in 2004 -- an increase of about 2 percent, more than enough to make up for the margin of victory four years ago, but not enough to make the state seem like a safe bet for Obama. Two weeks ago, the campaign had Richardson kick off a "30/30" drive to register 30,000 more voters in the 30 days before the registration deadline of Oct. 7, and officials say they're on pace to meet that goal. Early voting, which begins Oct. 18, could account for more than half the ballots cast, which would make it easier for both campaigns to focus on finding people they're counting on by Election Day.

What Obama's campaign seems to be modeling itself after, consciously or not, is Bush's winning effort here in 2004. "We had success in 2004 because we, frankly, put together a more well-oiled turnout operation than Kerry," said Scott Jennings, who ran the state for Bush in that campaign but has since moved back to his native Kentucky (after a stint in the White House). "We really just didn't confine our campaigning to the most populous area, which is Albuquerque. We turned out the vote in those rural areas."

What New Mexico and neighboring Nevada and Colorado represent, for Obama, is an alternate route to victory in November. If he holds all the states Kerry won four years ago, wins Iowa (where he's up big) and wins two of those three Western states, he'll be the next president. "For the Hispanic community, I want you to start actually voting your numbers," Obama told the crowd in Española. "Start flexing your muscles. Right here in New Mexico, you'll be the difference maker. Don't stay home -- just remind yourself, 'Sí se puede. Yes we can.'" Chances are he'll be back to help make that happen.