What do people do all day? A tour through thoroughly modern careers, from family-reuniting expert Troy Dunn of WeTV's "The Locator" to freelance hero Michael Westen of USA's "Burn Notice." 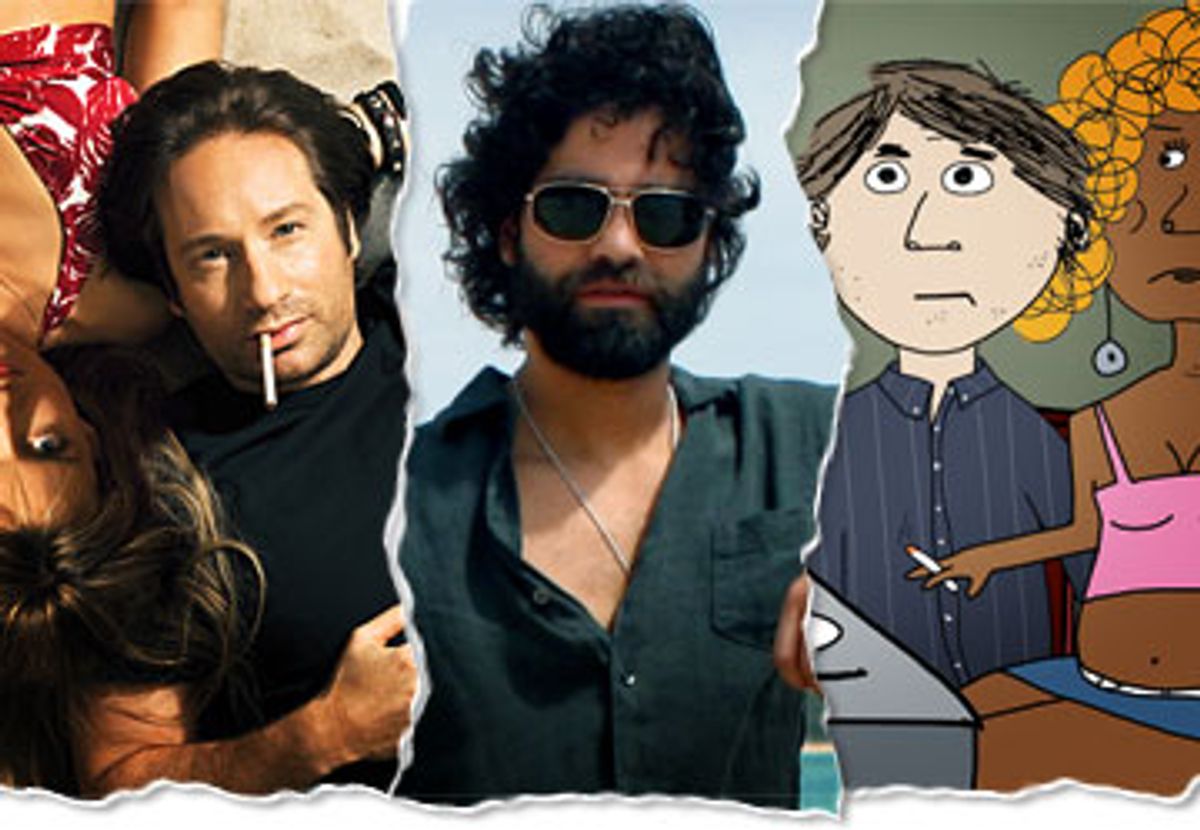 My 2-year-old daughter's favorite book right now is Richard Scarry's "What Do People Do All Day?" She's fascinated by the small-scale economies depicted therein, from the goat farmer who sells his crops to the local cat grocer and uses the money to buy a suit from the local rabbit tailor to the pig carpenters, dog electricians and raccoon plumbers who build a house for a large family of rabbits next door to Huckle the cat. Every night, my daughter wants to hear about the firemen who save Huckle when his hapless mother almost burns the house down with her iron, or she asks to hear the story of Captain Salty, who sails an ocean liner across the seas and saves four pig fishermen in yellow raincoats when their boat sinks in a storm.

First published in 1968, Scarry's book is admittedly a little old-fashioned. Male pigs, cats and dogs go to work at important jobs, while female cats, rabbits and pigs buy meat from the butcher, type out memos for their bosses, leave the iron unattended, and smile widely when their farmer husbands bring them eggbeater earrings as gifts.

But what's even more sad is that the intimate local economies of Richard Scarry's vision are mostly a thing of the past, and active, community-oriented jobs like working at a small bakery or tailoring suits for local customers are much rarer these days. In fact, a modern version of "What Do People Do All Day?" would replace happy businessmen dogs and farmer goats with disheveled pigs that sit around in the pajamas, tapping out e-mails from the filthy confines of their cramped home offices. Instead of learning about meaningful, active jobs like captain, fireman and butcher, kids could flip through pages and pages of the same exhausted little animals hunched over their laptop computers, squinting into their screens and mumbling incoherently into their cellphones. Finally, young children might truly understand what it is their parents and other adults actually do all day.

Of course, then they'd want to kill themselves.

The truth is, the jobs that most of us do wouldn't make for very interesting picture books. Even in the rare cases that a job isn't repetitive, tedious, annoying and soul-sucking, it absolutely defies description. Take Troy Dunn, a freelance renegade whose job is so unusual, even the publicity department at a TV studio couldn't come up with a suitable title for him. "The Locator"? Really? Doesn't that sound like some nefarious double agent from a Quentin Tarantino thriller?

But the show's opening credits don't do justice to the strange and very emotional way that Dunn launched his strange career. At the television critics' press tour this summer, Dunn told a roomful of journalists (myself included) that when he found the long-lost biological mother of his adopted mother 20 years ago, the woman told him over the phone, "If I knew that it was going to call, I might have aborted it."

"That was by far and away the worst experience," Dunn said. "And I would say over 97 percent of the reunions I've done have been positive, but there are occasions where people don't want to be found, but you don't know until you ask them."

Dunn never gave up, and called his biological grandmother every year on his mother's birthday, just to make sure that she hadn't changed her mind about meeting her daughter (she never did and she's since passed away). Dunn's mother, Kate, who was also on the panel, told us that as painful as that initial experience was for her, she still felt relieved to finally have some closure.

Considering this was Dunn's inaugural experience in tracking down family members, it's incredible that he became so involved in this line of work. But that first effort underscores just how dramatic and moving (and how unbelievably heavy and loaded) these reunions between estranged family members can be.

On the show's premiere episode, brother and sister Jerry and Debra are determined to find their half-brother, Michael, who was taken away by their stepfather when they were very young. Neither sibling had seen Michael since he was 2 years old, but both become teary-eyed when they talk about him. As with many of the cases Dunn takes on, not all of the details of the family's situation are revealed; how could Michael's mother have allowed his father to abscond with their son?

When Dunn finds him, long-lost brother Michael explains that he'd been told that his mother treated him badly, so he'd assumed that looking for her was a bad idea. His father, whom he calls a "good guy," never even told him that he had siblings.

Michael seems hesitant about the whole reunion at first, but once everyone meets, it's as if he has finally found the missing pieces in his life. He sits on a bench with his brother and wipes away tears for several minutes without speaking. Later, we find out that (not surprisingly) Michael is angry at his father for keeping the rest of his family from him. Michael even ends up moving to Indiana so he can be closer to his brother, sister and mother.

In another episode, a mother named Angel searches for her twin sons after they were adopted without her permission (their biological father basically abducted them, then gave them to another family). The twins, who've just graduated from college, aren't exactly anxious to meet Angel, and their adopted mother has mixed feelings, too.

"This is a very big thing and it's kind of intimidating. It's all happening immensely fast. I almost don't feel ready for it," says one of the twins.

While you might be tempted to assume that this is just another cheesy reality show that exploits the emotional turmoil of those involved, the tone of the show is anything but sordid. No one is pressed for ugly details and big chunks of the story are left out in deference to the participants. We don't hear all that much about drinking problems, for example, or the details of abusive relationships, although it's easy to see that these factors are present in many cases.

If you've been rendered a stoical zombie from too many hours hunched over your laptop, "The Locator" will make you feel like a human again. Just make sure you've got a big box of tissues nearby, because when brothers who look alike stare into each other's eyes and break down crying, or a mother weeps over the daughter that her parents forced her to give up for adoption when she was a teenager? You will cry your tired eyes out, I personally guarantee it.

But some people's jobs are just more earth-shattering and consequential than others, let's face it. Just look at Michael Westen of "Burn Notice," former spy and current freelance helper of your random victims of society's ruthless vultures. If Richard Scarry were to create a Criminal Underworld version of "What Do People Do All Day," replete with money launderers and drug smugglers and sophisticated weapons specialists and organized crime bosses, Michael Weston would be a world-weary but resilient fox whom the little pigs and goats and rabbits of Busytown turn to when local thugs are at the door, ready to wield their baseball bats over unpaid debts. ("Big men are at the door! Bang, bang! They want to smash in Able Baker Charlie's skull!")

Despite the ugly mob of miscreants that Westen is forced to outwit week after week, every time I watch "Burn Notice" I marvel at how entertaining and funny the show is, and last Thursday night's finale was no exception. All season, Michael (Jeffrey Donovan) has been gathering information on the people who burned him, treading lightly but compiling more clues about what that nasty manipulator Carla (Tricia Helfer of "Battlestar Galactica") is up to. In truth, Michael hasn't learned all that much so far, but when Sam (Bruce Campbell) tails Carla to a luxury hotel and runs surveillance on her for a few days, they learn more. (Luckily for Sam, this involves drinking good mojitos while watching Carla swim laps in the hotel pool.) It seems that Carla is planning something very big involving a sniper, a frighteningly powerful Soviet rifle, a ferry presumably carrying an unknown victim, and a bunch of suited international types.

Meanwhile, Michael's casting more and more longing looks at his ex, Fiona (Gabrielle Anwar), who has a new boyfriend, Campbell. The perfect form of torture for Michael, Campbell is handsome, sincere, likable, an upstanding citizen -- he's just a great guy. He's Mr. Right ... for anyone but trigger-happy Fiona, who begs Michael every few minutes for a chance to shoot someone, anyone, damn it!

Ultimately, Fiona, Michael and Sam are pulled into a stakeout that's actually a setup by Carla, which leads to a big car chase enhanced by the usual amusing instructional voice-over. ("The electronic stability program was originally developed to help keep cars from sliding on icy roads. But it's a great tool for the precision driver. When you need to slide you can simply turn it off, and turn it on again when you need to maneuver.") While Fiona manages to slow down Carla's hired goons, Carla and Michael are both on motorcycles and Carla's gaining ground until Michael slides under a truck, then smiles back at an enraged Carla before riding away. Honestly, this show's got so much hokey '70s era charm, I feel like I'm watching "Starsky and Hutch" half the time.

Unfortunately, we don't learn much more about Carla or her people, and the whole thing ends with Sam calling to tell Michael that the sniper's been killed in an explosion, apparently set up by Carla, just as Michael's about to unlock his own front door. Michael's door explodes in flames and he pulls an action-star leap over the front banister. Bam, boom, pow! Roll credits.

The writers of "Burn Notice" are a little better at witty dialogue and bam-boom-pow than they are at plotting out the mystery of Carla and the forces that conspired to burn Michael. If you look to the best seasons of "24" or "The Shield" or other shows where the main characters are fed a steady flow of clues, viewers are often tossed a bunch of false leads along the way, or even a few solid leads that nonetheless fail to reveal the whole picture. This finale didn't offer us enough information, beyond the fact that Carla's up to something nefarious, and she looks damn good swimming in the pool all day long.

But then again, "Burn Notice" isn't really a serial drama, and it wouldn't be nearly as interesting if it were. Each episode is smart and funny and enjoyable enough to stand on its own charms, which is much more than you can say for most serials. Plus, "Burn Notice" will be back for a winter season and we'll get more answers soon enough.

In the meantime, we can all get back to squinting at our computer screens, knowing that at least someone out there in Busytown is building roads, stamping letters, reuniting lost families, or outwitting evil blond Cylons on motorbikes.

Next week: Men behave badly on CBS's "Gary Unmarried," Showtime's "Californication" and HBO's "The Life and Times of Tim."