Nobody's happy with a no-strings-attached bailout. Taxpayers should not end up being the only ones to pay for Wall Street's mistakes. 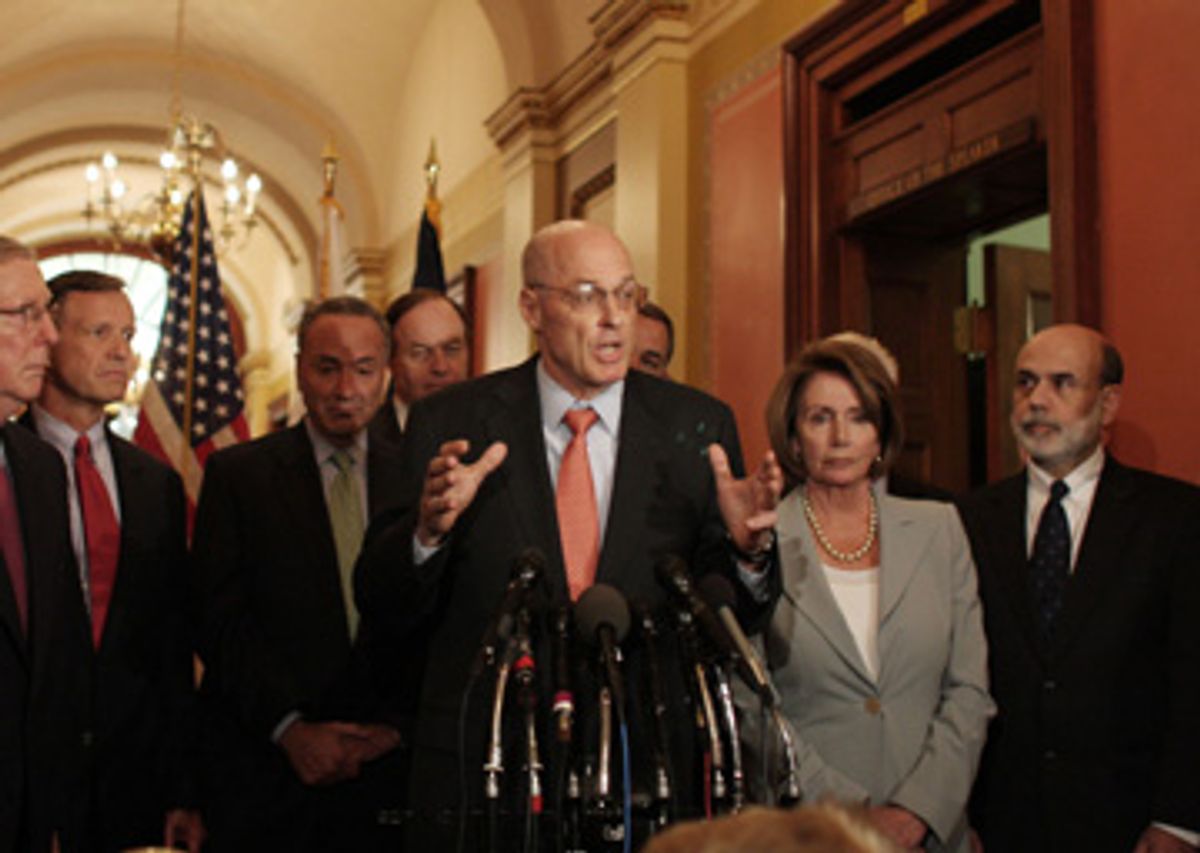 The early reviews of the Paulson plan to spend up to $700 billion buying mortgage-related assets from ailing financial institutions have not been kind. Over the weekend, DailyKos diarist "New Deal democrat" published a nice roundup, complete with multiple updates, that gives a sense of how the consensus evolved. Paul Krugman's Monday New York Times column distills his set of objections with further clarity.

Krugman's distrust of the competence of the Bush administration is no surprise. But when the likes of right-wing propagandist William Kristol, former Republican House Speaker Newt Gingrich and conservative economist Greg Mankiw all contribute to the chorus of doubt, and both presidential candidates express reservations, it's clear that one of the major stories of this week will be the struggle to repackage the Paulson plan in a form that addresses objections from both left and right.

Everyone, on every side of the spectrum, is uncomfortable with giving the Treasury essentially unlimited power to spend taxpayer money bailing out financial institutions. Democrats are particularly unhappy that very little is being asked in return.

A popular point of frustration: A paragraph in the draft text of the plan that reads:

Decisions by the Secretary pursuant to the authority of this Act are non-reviewable and committed to agency discretion, and may not be reviewed by any court of law or any administrative agency.

The language seems as much directed toward preventing lawsuits from financial institutions unhappy with the price that they receive for their assets as it does toward warding off interference from other government bodies, but regardless, as written, it seems a bit overreaching.

Perhaps more important, any deal to take failing assets off the balance sheets of private sector companies will likely end up valuing those assets at more than they are worth -- in terms of what they can be sold for on the open market right now. As many have pointed out, this amounts to a taxpayer-subsidized windfall for Wall Street. Democrats are looking for some quid pro quo. Among their early demands: some kind of restriction on executive compensation for executives of the companies getting federal help. Massachusetts Democrat Barney Frank has been particularly vocal: The Wall Street Journal reports:

Regarding executive pay, Rep. Frank's draft would mandate that any company selling assets into the program "meet appropriate standards for executive compensation," including limits on what could be deemed excessive or inappropriate, according to a copy seen by The Wall Street Journal. The government would also have the ability to "claw back" incentive pay that was based on "earnings, gains, or other criteria that are later proven to be inaccurate." Mr. Paulson is resisting those efforts.

Astoundingly, Paulson plans to fight any efforts to limit executive pay because "he fears that provision would render the program moot, since many firms might choose not to participate."

They might choose not to participate in a $700 billion plan designed to save them from a mess they were primarily responsible for causing? I don't think I'm alone in finding that prospect irritating.

But here's the great Catch-22 of how modern financial markets work. The natural reaction to a CEO, whose company is headed toward bankruptcy and liquidation because of bad investments, resisting any "haircut" for himself in return for government help, should be: "Tough -- if you don't like it, go file for Chapter 7 or 11." But if the failure of that company sets off a domino effect that brings everybody else down, then our understandable lack of sympathy for the intransigent CEO gains us nothing but a worsening meltdown.

Somehow, that paradox must be resolved. But in the final month and a half of a presidential campaign conducted against a backdrop of rising unemployment and other economic stresses, the political fallout for spending $700 billion on a bailout plan, without getting anything in return, is going to be intense. John McCain and Barack Obama, over the weekend, both distanced themselves from the Paulson plan, and as Congress battles with the Treasury over the week ahead, it will be very interesting to see how the campaigns further involve themselves with this historic remaking of the financial system.

It's also too bad that first Democratic presidential debate, due this Friday, and likely to be watched with intense interest by millions of Americans, is dedicated to foreign policy. A nice debate on the current financial status quo would be timely.