Not so fast, Secretary Paulson!

The future of capitalism as we know it will be decided this week. Now is the time for a Democratic Congress to show its mettle. 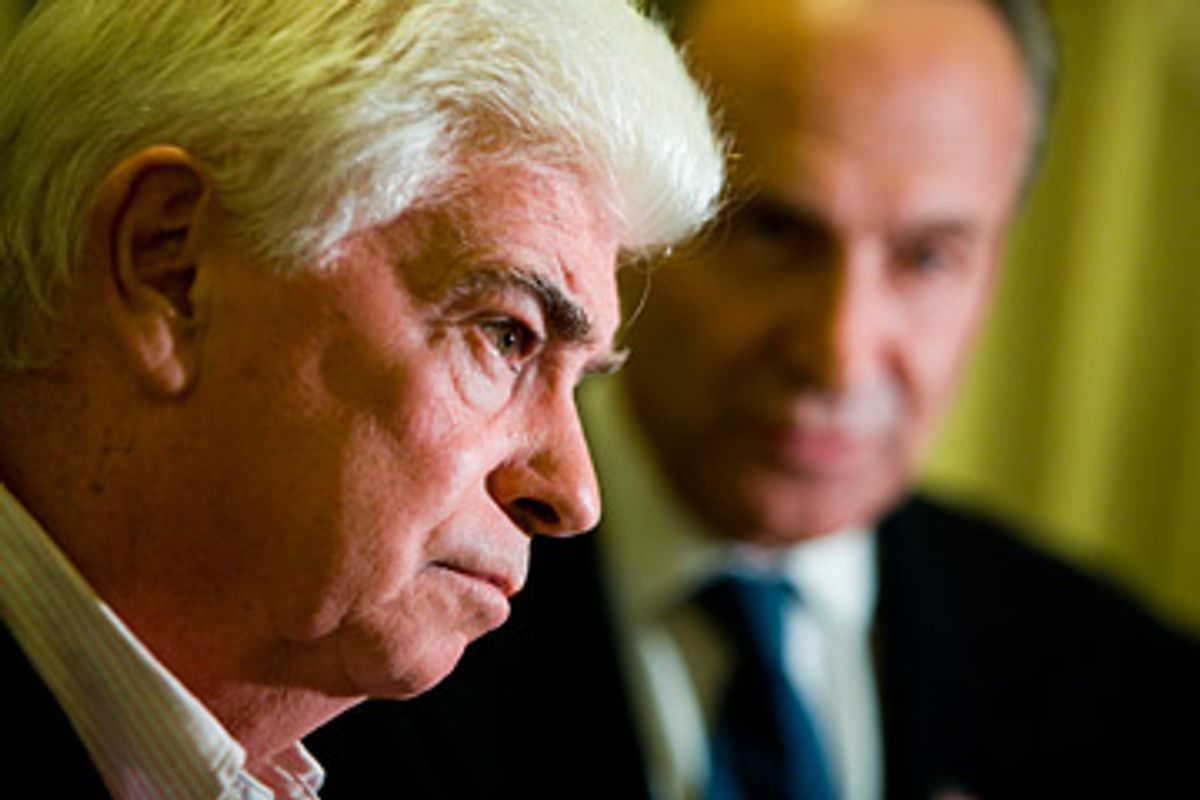 The stakes could not be higher. Forty-three days before Election Day, Congress and the White House are going to spend this week hammering out the details of the most radical government intervention in the U.S. economy since the Great Depression. One would hope that this kind of profound remaking of capitalism would only take place after Congress had time to hold lengthy hearings exploring all the potential pitfalls of putting many hundreds of billions of dollars of taxpayer money at risk while attempting to stabilize terminally skittish markets. But that will not happen.

There is no time for careful reflection. We can disagree with Treasury Secretary Paulson on many things, but there is little doubt that the bottom is waiting to fall out of financial markets. The consequences of no action could be, indeed, are almost certain to be, disastrous. So here we go -- as University of Chicago professor Luigi Zingales wrote on Thursday, "The decisions that will be made this weekend matter not just to the prospects of the U.S. economy in the year to come; they will shape the type of capitalism we will live in for the next fifty years."

The outlines of the debate are rapidly evolving. Paulson and the White House want a "clean" bill -- in other words, they want Congress to roll over and give Treasury authority to spend $700 billion buying bad debt, with little or no provision for making sure that A) the system is somehow fundamentally improved after this gambit and B) the parties at fault, who will benefit from the rescue, are punished in some way for their irresponsibility.

No way, say congressional Democrats. Late Sunday, Sen. Chris Dodd, chairman of the Senate Banking Committee, released his plan. It calls for limits on executive compensation, government getting a piece of equity in the firms that are being rescued, and the creation of a new oversight body. As he told the panel on "Morning Joe" Monday morning:

"Are you going to turn over $700 billion to someone ... who will be in charge of all of this, without any accountability, oversight? Are you going to do it without making sure the taxpayer is first in line ... to get something back if these assets produce any -- any wealth?

The uncertainty as to how this drama will play out is obviously spooking investors. As of this writing the Dow Jones industrial average was down over 200 points, and one has the very strong sense that the euphoria that overcame investors late Thursday and Friday, when the news of the bailout plan first broke, is rapidly fading away. It's never too smart to speculate about what drives market investor psychology, but underneath the clear-and-present fear about what might happen to their portfolios this week, there are also much larger questions fueling their discomfort.

Martin Wolf, the esteemed economics commentator for the Financial Times, expressed this unease in a round table hosted by Fareed Zakaria on CNN on Sunday. "Will this call into question," he worried, "the whole movement to somewhat freer markets to liberalization across everything -- trade, movement of people, movement of capital? That's a very big sort of question about the whole zeitgeist, the time we live in."

In other words, will the seismic shift currently roiling government and the economy roll back, not just the Reagan revolution -- the so-called Great Deregulation that began in the 1970s -- but will it roll back globalization itself -- the intimate linkages between national economies that ensure that any flutter of the butterfly's wings in New York become a tsunami in Shanghai, London and Tokyo faster than a Bloomberg terminal can update its stock-ticker.

Appearing on the same program as Wolf, Rep. Barney Frank, the chairman of the House Financial Services Committee, made his position clear. The experience of the last few years demonstrates the bankruptcy of the status quo approach and offers a golden opportunity for new thinking:

We now have Secretary Paulson and Chairman Bernanke appearing on Wall Street, and their announcement is "We're from the government. We're here to help you."

Clearly, there has got to be a constraint on risk-taking and the highly leveraged risk-taking that the system doesn't provide itself.

Frank's contention is that such stronger regulation should be seen as "pro-market" -- without government setting firm rules, investors will continue what Frank calls "an investors strike. And until and unless there is some assurance to those investors, that has to come in part from sensible regulation, they don't go back in."

So let's take a closer look at the Dodd proposal, the provisions of which are likely to be echoed by whatever Frank is cooking up on the House side. A new supervisory body makes sense, as many are currently noting, on both sides of the political spectrum; why should we trust whoever is appointed secretary of the Treasury by whoever is elected in November to decide who should be rescued, without appeal to any other court or agency? At one time, let us recall, one of the great defenders of deregulation, Sen. Phil Gramm, was considered a likely prospect for Treasury secretary under a McCain administration.

Some kind of restriction on executive compensation in return for a bailout seems an absolutely necessary requirement for new legislation, even if the Bush administration will resist mightily. But the politics of the moment require it. On Monday morning, John McCain, inhabiting the newest of his Madonna-like series of constant personal reinventions -- the crusading economic populist -- railed against golden parachutes for Wall Street executives. When the Republican presidential candidate is pushing class warfare, it's hard to see Congress could pass a bailout plan without some punishment for the guilty, just before voters head to the polls. We've seen this Democratic Congress bend over before, but now is the time, to quote George H.W. Bush, to draw a line in the sand and say: Thus far, and no further.

As Barack Obama declared last week, the current troubles are a verdict on a failed economic philosophy; it is unthinkable that those who benefited most from that philosophy should avoid suffering the consequences of its failure. As Dodd pointed out on "Morning Joe," if you're looking for a way to ensure that "Pat Buchanan's army with pitchforks will be at the gates," letting financial institution executives off the hook would be a good way to go about it.

But Dodd's proposal that the government get shares in the companies it rescues is the most interesting part of his plan. After all, why should the taxpayer bear all the liability for the uncertain value of Wall Street's bad debt?

Sen. Dodd's plan would not allow the Treasury Department to purchase any assets "unless the Secretary receives contingent shares in the financial institution from which such assets are to be purchased equal in value to the purchase price of the assets to be purchased."

You don't often find a Democratic senator and a University of Chicago free-market true-believer economist on the same side, but Luigi Zingales' widely circulated "Why Paulson Is Wrong" essay provides strong support for the idea that the government should get a piece of the action, framed in terms of debt forgiveness in exchange for equity.

Zingales argues that a reduction in debt can benefit both equity holders and debt holders because "there are real costs from having too much debt and too little equity in the capital structure." But debt holders tend to resist government-ordered debt forgiveness for the very simple reason that a government bailout is a preferable solution, for them.

As during the Great Depression and in many debt restructurings, it makes sense in the current contingency to mandate a partial debt forgiveness or a debt-for-equity swap in the financial sector. It has the benefit of being a well-tested strategy in the private sector and it leaves the taxpayers out of the picture. But if it is so simple, why no expert has mentioned it?

The major players in the financial sector do not like it. It is much more appealing for the financial industry to be bailed out at taxpayers' expense than to bear their share of pain.

Let the battle be joined. On one side, the White House and Henry Paulson, using the threat of a systemic crash to bludgeon Congress into passing immediate legislation that expressly benefits those who profited the most from the Great Deregulation. On the other, a House and Senate about to face reelection, with an opportunity to fundamentally change the terms of the game as it has been played for decades.

The Bush administration has conceded several changes to its rescue plan for the troubled banking industry, including agreeing to compensation limits for bank chief executives taking part in the plan and the need for more help for homeowners facing foreclosure, a leading House Democrat said Monday. Chairman of the House Financial Services Committee Rep. Barney Frank said the Treasury also agreed to Democrats' idea that the federal government should receive warrants to take an equity stake in financial firms in exchange for the government purchasing toxic assets from them.