The cost of leaving

I can't afford to stay in my marriage -- but how will I afford to leave it? 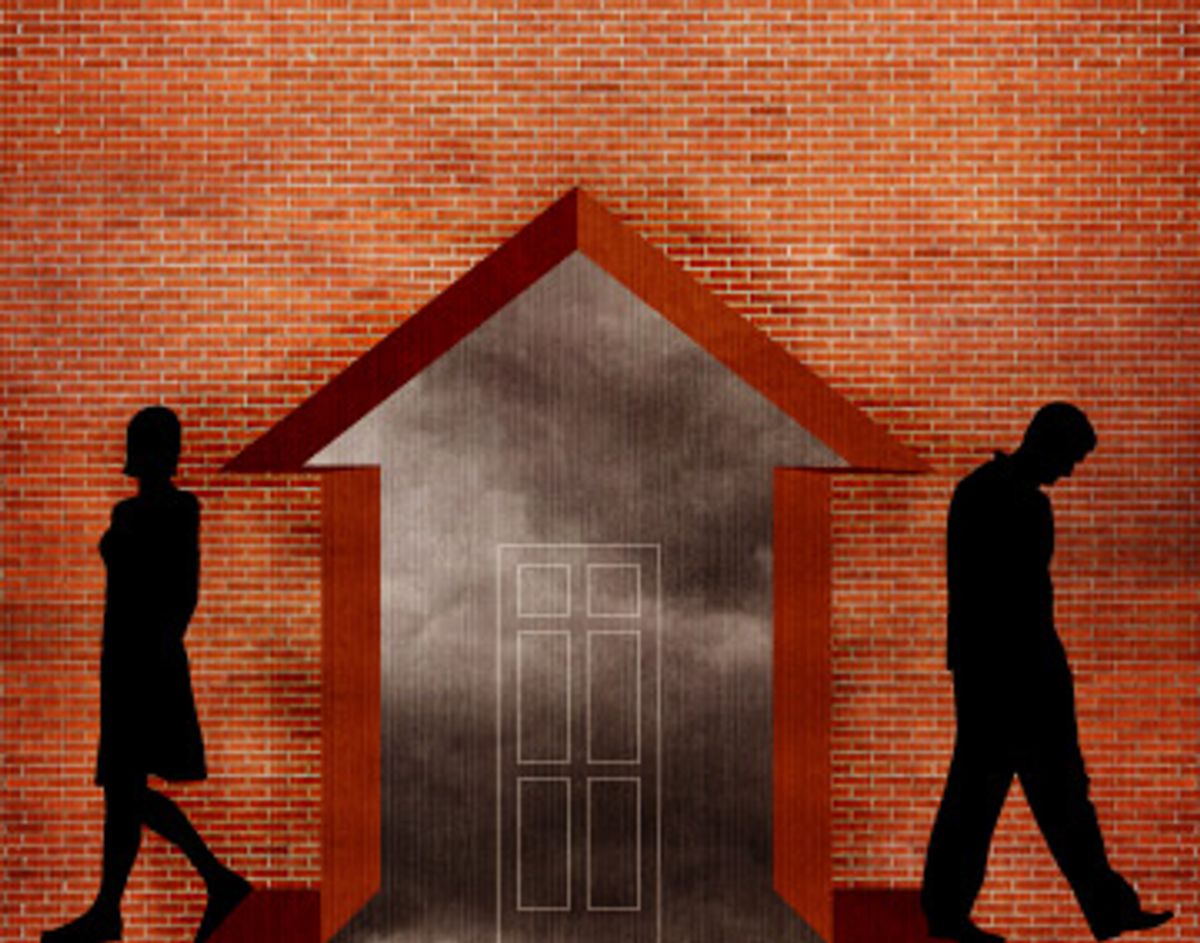 My marital separation would be so much easier if I were in a better income bracket. Then again, if I were in a better income bracket, maybe my husband and I wouldn't be separating at all. I could rattle off all the reasons why the man that I promised to love forever is not sleeping next to me tonight. I can list all the heartaches we've endured over the last two years. Or I could cut to the chase and tell you that this is a story about money.

We saved and scrimped and searched for three years before sinking everything we had and more into a home for ourselves and our two children, a tiny co-op in a fringy New York City neighborhood. The process left us emotionally and financially tapped. Then, three days before we closed on the apartment, my husband lost his job.

Ultimately, it wasn't the mortgage or job search or the way we both had to hustle for freelance work or the piled-up bills that did us in, although those things were a kick in the teeth. All those indignities we might have endured, though, had we endured them together. Instead, the stress and the pain and the lost self-esteem and inevitable and often crippling psychic toll of our strained circumstances contaminated our lives and brought out something in both of us that we couldn't come back from. The harder we tried to be brave, the further apart we grew.

It may well be that if this financial and subsequent emotional crisis hadn't driven a wedge between us, something else would have eventually done the job. It's certainly fair to say that we're not the same people we were when we married a decade and a half ago, in our mid-20s. But even if our financial disasters weren't the cause of our breakup, they sure were the catalyst.

Yet they've likewise made us think long and hard about the consequences of ending it. I have spent hours at my desk, ruefully contemplating my Quicken spreadsheet, calculating my monthly income and expenses, trying to make the numbers turn out better. Emotionally, I couldn't afford to stay in this marriage any longer. Financially, I don't know how I'll be able to afford to leave it.

Before I actually became one of those people whose marriage breaks up, I had a very simplistic notion of separation. It was a scene in a movie, one where the music swells and a woman stands tearfully looking out a window while a man in an overcoat tosses a suitcase into a taxi. Here's the reality: It's not like checking out of a hotel. And if it's a movie, it's more like "Dead Man Walking. "

Long after we first broached the painful subject, my husband and I were still planning how to finesse our separation. It took weeks of discussion and more than one heavily annotated chart. Grief is not merely quantifiable; it can be PowerPointed. On the upside, the logistics of our unraveling have spurred us to communicate with a candor and spirit of cooperation that has been friendlier and more generous than almost anything that precipitated it. And it forced us to rely, heavily, on the charity of others.

Our separation is not a tidy business of someone going off to his quaint bachelor digs. Mostly my husband has been staying with his elderly parents, a few towns over, an arrangement that nobody's enthusiastic about. At other times, we've cobbled together alternative accommodations. When our friends down the hall went away for two weeks, we traded off staying in their apartment, a situation that was unusual but which provided maximum access to our children. Later we made plans for him to stay at a Brooklyn musician friends' apartment, but when the guy's tour was canceled, we were sent scrambling for last-minute backup options. We've even had an awkward night when I went to a play with a girlfriend, returning late and sleeping on the couch while he slept in our bedroom. And if you're looking for me next week, I will be taking up residence in another friend's Upper West Side apartment during her vacation. This isn't just a separation; it's the Separation World Tour 2008, sponsored by Samsonite and the New York City Metropolitan Transit Authority.

We still split the expenses. When I think about shouldering them alone I can barely breathe. I can't pay a mortgage single-handedly. I don't even know if I can give up our family phone plan. Some days, I look at the bills and wonder, is losing my rollover minutes the price I have to pay for freedom? He and I have conversations galore, but we still haven't figured anything out that feels equitable and practical.

I have lived most of my adult on a limited income, have budgeted and penny-pinched and done without. I rarely go to restaurants or buy new clothes. Yet even the few indulgences I once enjoyed -- a once-a-week mocha, an occasional new book -- now feel out of reach. I am taking the pittance I put aside every month for my daughters' college education and redirecting it toward the day-to-day cost of living. I watch as the shabby IKEA kitchen cabinets sag precariously. They will likely soon fall apart completely, and I don't know how I'll ever be able to replace them. The fridge is on the fritz. They need school supplies and fall clothes. Beats me how it'll happen. The burden of this choice, the potential for utter ruin, haunts me constantly.

Breakups are painful and crappy even in the best of circumstances. My two close friends of reasonably independent financial means rail over the endless minutiae of splitting expenses with their exes. My happily remarried college pal still describes her youthful divorce as "an amputation." They're the ones who got off easier. Another friend and her estranged husband had to live together for two years in a miserable state of marital limbo, because they simply couldn't afford to split up the family. And a fellow mom from the playground confided recently that she's spent the past year wanting to leave her marriage, but how could she and her kids survive on her salary?

In most of history and even now in most of the world, a woman walking away from a marriage has been unthinkable. Autonomy is rarely an option. Hell, I'm doing it, and it still feels like a long shot. I'm still not convinced that the mere possibility of mutual happiness apart from each other is a noble or practical enough goal. I worry that I am limiting my children's lives, that in addition to all the emotional baggage of not having Mom and Dad across from them at the dinner table, they will have to make all kinds of material sacrifices they didn't sign up for. I ask myself every day if my kids would be happier with two brave souls sticking it out but keeping them more secure than they could possibly be with a primary caregiver whose chances of plummeting into poverty just went through the occasionally leaky roof.

And yet, when I was still in the contemplative stage of the process, the notion of staying in something because it was more financially advantageous struck me as hopelessly cynical and downright mean. I saw us growing older and sadder. I saw something that had been wonderful and good and loving for so long becoming twisted into something mercenary and suffocating, dwindling into a joyless splitting of the electricity bill and the groceries. I saw two goodhearted people, who had brought two hilarious and beautiful children into the world, at a point when the only right and kind thing to do seemed to be to take the craziest fiscal gamble imaginable. I couldn't save my marriage. I am having a hell of a time saving money. But I might be able to save, at least, the rest of our lives.