I ghost-wrote letters to the editor for the McCain campaign

I spent a morning in John McCain's Virginia campaign headquarters ghost-writing letters to the editor for McCain supporters to sign. I even pretended to have a son in Iraq. 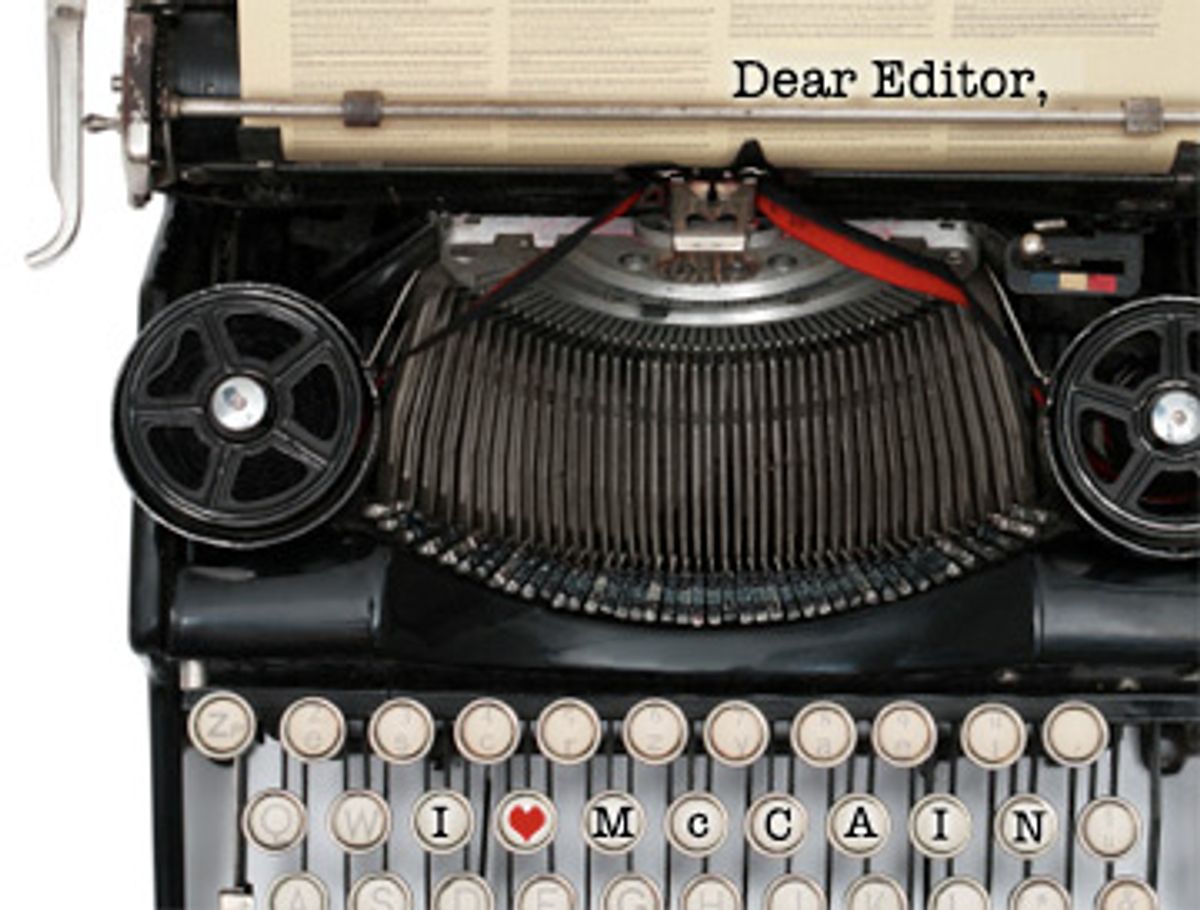 "You can be whoever you want to be," says an inviting Phil Tuchman. "You can be a beggar or a millionaire. A mom or a husband. Whatever. You decide!"

I volunteer in political campaigns now and then. After a series of outings for Obama and a first mission as a phone banker for John McCain, I returned to McCain's headquarters in Arlington, Va. The offer was too alluring to delay -- they wanted to put me into action as a ghostwriter. Next to commercials and phone banking, writing letters to the editor is the most important method of the McCain campaign to attract voters. At least that is what's written in the guidelines that McCain campaign worker Phil Tuchman presents to me.

Today he is training six ghostwriters. What on earth is the appeal of McCain for the former Soviet bloc? Last time I was here, an exuberant Polish guy was phone banking next to me. Today, a Russian in yellow suspenders is shimmering at the same table, looking just like an actor who is famous in the Netherlands for star turns as a genius who suppresses his dark side with painstaking self-control.

The assignment is simple: We are going to write letters to the editor and we are allowed to make up whatever we want -- as long as it adds to the campaign. After today we are supposed to use our free moments at home to create a flow of fictional fan mail for McCain. "Your letters," says Phil Tuchman, "will be sent to our campaign offices in battle states. Ohio. Pennsylvania. Virginia. New Hampshire. There we'll place them in local newspapers."

Place them? I may be wrong, but I thought that in the USA only a newspaper's editors decided that.

"We will show your letters to our supporters in those states," explains Phil. "If they say: 'Yeah, he/she is right!' then we ask them to sign your letter. And then we send that letter to the local newspaper. That's how we send dozens of letters at once."

No newspaper can refuse a stream of articulate expressions of support, is the thought behind it. "This way, we will always get into some letters column."

It is the day after Sarah Palin's speech at the Republican convention. Today, she is our main subject. The others are already enthusiastically hammering their keyboards. I am struggling with a tiny writer's block. "Dear Editor ..."

Phil Tuchman has handed out model letters, and talking points and quotes from Sarah Palin's speech. But whom do I want to be?

Let's loosen up my fingers a little first -- and my principles, too. Am I actually allowed to make up letters? At the moment, it seems to be the only way to demonstrate how this is done in a campaign. So yes. I start practicing attractive sentences about Sarah Palin:

"Her biggest plus to me is that, besides being amazingly smart and qualified, she managed to remain a woman like us. She is the PTA hockey moms. She is the working mothers of special needs children. She is every caring mother of a challenging teenager."

Her pregnant daughter Bristol (17) is not a talking point. A talking point is her son Track (19), who will be deployed to Iraq.

"And most of all, she is just like any mother of a child who deploys to Iraq in the service of this country."

Now we are getting somewhere. I look around. I type:

"And my heart needs him back safe so much."

Yes, yes. Well done. Another paragraph -- why not? Now let's pump some iron in that mother, for after all, we are not with the Democrats here. Look up the right, patriotic phraseology in the model letters.

"But when I see him again, I also want to see his face glow with pride. Just like the day he told me he enlisted."

Yes, like that. And now full speed in the direction of McCain's plans to continue the war. Sell that war. With a mother's heart.

"That is why Senator John McCain could count on my vote from day one."

But whatever happened to Sarah Palin in this story? I gaze out of the window. This takes 10 minutes. Then:

"With Sarah Palin, I have even more reason to trust in victory. She represents my heart."

Hmm. Does that sound like total doublespeak? Or does it sound like logical reasoning to a McCain supporter? I cannot come up with anything better.

"Sincerely ..." I leave the dots for somebody else's signature.

Does Phil Tuchman want to read it?

Phil bends over my computer screen and reads. This takes a while. I am expecting roars of laughter or to be kicked out. Then he says drily: "I like that. It appeals to the hearts of people. Can you write more letters?"