As I spent time with the Iranian president in New York, the central purpose of his trip to the United Nations became clear: Getting reelected back home. 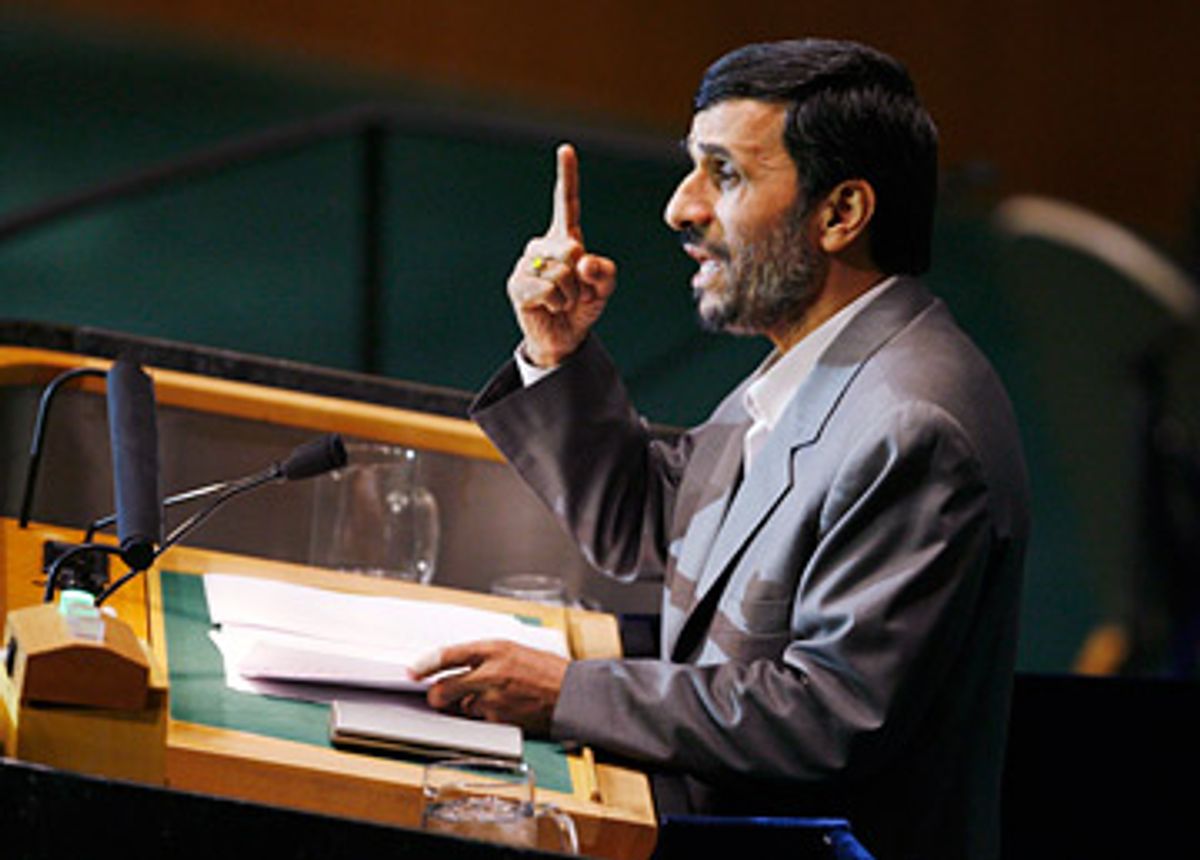 Iranian President Mahmoud Ahmadinejad returned to New York this week to attend the opening of the United Nations General Assembly for his fourth visit -- and perhaps his last, should he fail to win reelection in next summer's Iranian presidential contest. But he aims to be reelected in June 2009, and his trip here revolved precisely around that goal.

Ahmadinejad clearly relished his opportunity on Tuesday to speak to the world from the same stage that the U.S. president does, and on the same day. But he also enjoys spending as much time as he can with the media, members of think tanks, and even college audiences during his short, State Department-restricted sojourns on American soil. As such, this year he hosted two iftar dinners (it still being the month of Ramadan). One was exclusively for Iranians and Iranian-Americans living in the Tri-State area -- at least those on a list of citizens the Iranian government maintains as not opposing the Islamic regime. The other was for American think-tank scholars whom the Iranian delegation views as important. Needless to say, Haleh Esfandiary of the Woodrow Wilson International Center for Scholars, who spent some months in jail in Tehran in 2007, was not invited, although two of her colleagues were.

Ahmadinejad's speech Tuesday at the U.N. (one I had a hand in translating) was an uncomfortable blend of sermon and anti-Zionist rage, bordering at times on the anti-Semitic. There were times, as I read the speech in English at the U.N. for a worldwide audience, when I was hoping perhaps to hear something a little more conciliatory or even something new -- and at times it was hard to keep a straight face (or, rather, a straight voice), particularly in the section where he repeated claims from the long-discredited "Protocols of the Elders of Zion." But Ahmadinejad's speech, this last year of his first term in office, was even more geared to an Iranian domestic audience than in years past. Indeed, that was the central purpose of this trip to the U.S., something that become increasingly evident as the trip wore on. When I was in Tehran at the end of this summer, there was much talk of former President Khatami's thinking of mounting a challenge to Ahmadinejad in 2009, and Khatami, whose generally positive image abroad is viewed with pride by many Iranians, could pose a threat to Ahmadinejad, particularly in the foreign policy area.

To the viewing audience in Iran, Ahmadinejad's speech was another defiant statement that Iran would not be bullied into giving up its rights, nuclear and otherwise -- and the logic he employed, perhaps lost to Western ears amid the inflammatory anti-Zionist tirade, was not altogether flawed. Iranians, and indeed many in the Third World, see a certain hypocrisy in the U.S. position: that Iran, a country that doesn't possess nuclear weapons and has not invaded or attacked another country in centuries, must not be allowed certain nuclear technologies (that might allow them to one day build an atomic bomb), while the U.S. itself is in breach of its disarmament obligations, builds new generations of nuclear weapons and is the only nation to have ever used them to attack another country. (Not to mention, under the Bush administration, regularly threatens other countries with military force or even invades them.)

Ahmadinejad knows that this argument doesn't win many fans in the U.S., but it plays well to a domestic audience predisposed to believe that American foreign policy is hegemonic by nature. Ahmadinejad also knows that the anti-Zionist rhetoric plays well in Iran, as it does across the Arab world. Only the intellectual and highly educated classes in the region find it self-defeating if not noxious -- and the Iranians in this class are in any event unlikely to be voting for him in 2009. Well aware of a powerful political movement back home to challenge him for the presidency next June, he likes to use his visits to New York to burnish his image as a defender of Iranian rights. Nor does it hurt to have on display his status as a world leader afforded wide media coverage, his cultivated image of piety, and his willingness to engage Americans and even the U.S. government.

A few days before he left Tehran, Ahmadinejad had said at a press conference that he would be interested in debating the two U.S. presidential candidates during his stay in New York, and he repeated that offer, which he noted was ignored, at a press conference immediately after his speech at U.N. headquarters. The press conference, extensively covered by the Iranian media, was notable for Ahmadinejad's eagerness to answer questions from the Iranian media (and other Muslim reporters) at the expense of the American media, whose Farsi-speaking Christiane Amanpour of CNN left early, after failing to get the attention of his aides despite her loud pleas and furious arm waving. That helped ensure maximum coverage in Iran and the surrounding region of his presence at U.N. headquarters. (Al Jazeera, a network that has had its bureau in Tehran shut down by the authorities on occasion, was called upon, as was Press TV, Iran's own answer to Al Jazeera English.)

Immediately following the press conference, Ahmadinejad said his iftar prayers, had a small bite to eat and then joined a private dinner at his hotel for some 45 invited guests (where he didn't eat the dinner placed in front of him). The Iranian ambassador to the U.N., Mohammad Khazaee, introduced the president, announced that the dinner meeting was off the record, and explained, rather unconvincingly, that the television cameras in the room would not film those in attendance and would not be broadcasting the event. Ahmadinejad listened carefully to the opinions voiced and the questions asked, taking notes, and responded to each individually as the guests finished their meals, all while the cameras were rolling. That some of the footage, showing a reasonable, charming and open president chatting amiably with American "scholars" would end up on the president's Web site, or would be used in a campaign commercial next year, was to my mind in no doubt.

The following evening, President Ahmadinejad held another iftar dinner, this time for Iranians living in the New York area, which, as in past years, was again covered only by the Iranian media and the president's videographers and photographers. This year more than most, it clearly was a priority for Ahmadinejad to be seen holding court with a few hundred Iranians, to show an audience back home that the president still has his fans among those in America, especially sophisticated New Yorkers who are the least likely, in the minds of ordinary Iranians back home, to be his supporters.

If there were any doubts that Ahmadinejad wanted this trip to the U.N. and all of his media appearances -- including Larry King, which is widely viewed in Iran -- to set the stage for his reelection campaign next year, those doubts were dispelled by something he said as an aside at the end of Tuesday night's dinner. Gently complaining about the U.S. State Department's issuing him a visa (something the U.S. is required to do as host country of the U.N. headquarters) only at the very last minute, he also mentioned that some in his entourage were actually denied visas. A close aide, he said, who had been present the previous year right by his side, was one of those refused entry. He was referring to Mojtaba Hashemi-Samareh -- his own "Karl Rove," the architect of his first presidential campaign, and undoubtedly his next one. He was, apparently, sorely missed.