Why Ben and Hank are right, mostly

Our economic system is indeed on the verge of a serious meltdown, but lawmakers should not grant Bernanke and Paulson the far-reaching powers they call for in their plan. 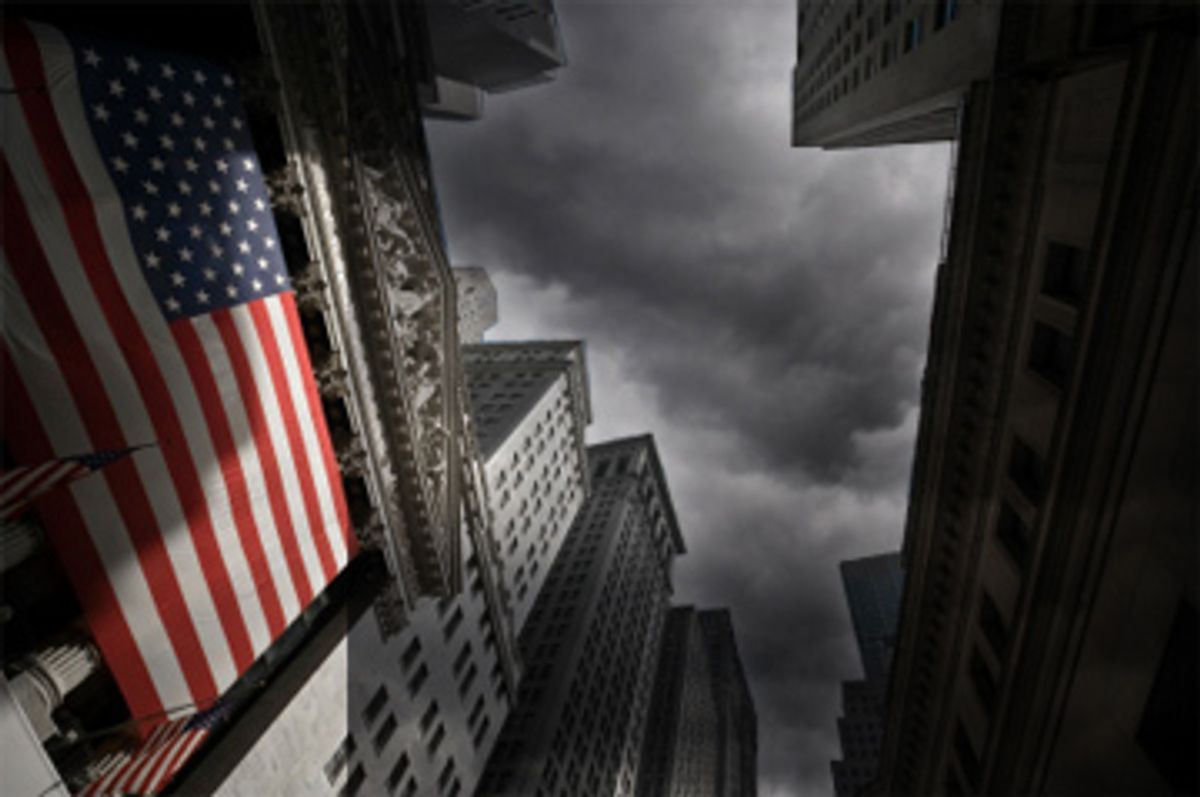 Treasury Secretary Henry Paulson and Federal Reserve chairman Ben Bernanke are not yelling for help -- asking for permission to print up $700 billion of Treasury bonds, sell them, and use the cash to buy up mortgage-backed securities -- for no reason. Things are bad in the financial economy and always threatening to spill out over into the real economy, destroying jobs and boosting unemployment. But things could easily get much worse: That is what Bernanke and Paulson are trying to stop with their valid call for assistance and their needed, albeit badly flawed, three-page plan.

Today's announcement that lawmakers are close to an early agreement in principle on the plan is good news for the country. Let's hope it has some teeth.

But what is going on? Back up for a second into the abstractions of economic theory. If on the morning of Thursday, Sept. 18, 2008, you had set out to park your money in a three-month Treasury bill, you would have found that the interest you could get was ... zero. Well, not quite zero: You would get $1 in interest over three months on a $1,000 Treasury bill investment -- an annual interest rate of 0.4 percent. By contrast, if you had taken that $1,000 and put it into a major bank in a three-month bank certificate of deposit -- a CD -- you would have been promised $14 in interest at the end of three months: an annual interest rate of 5.6 percent.

Why this big spread in interest rates? What does it mean? It means that even though the bank has promised to pay you back your CD principal plus $14 in interest in three months, the CD is a higher-risk asset, because people are not sure that the bank will be around to keep its promise to pay them back with interest. (By contrast, people are reasonably sure that the United States government will not dry up, blow away and stop payment on its debts in the next three months.

What if you show up in three months to get your money and the bank is locked tight with the lights off -- as in fact happened to people who showed up at the London office of Lehman Brothers on the morning of Monday, Sept. 15? If the bank goes belly-up in the next three months your investment is probably not a total loss: You will probably get three-quarters of your money back, eventually, after being tortured by lawyers over a period of years. On the other hand, if the bank goes belly-up it is probably because other very bad financial things are happening and you really need your money right then. The $250 you will have lost will be as painful to you as a loss of $500 in normal times.

So interpret the $13 spread in the interest paid over the next three months on a CD vs. a T-bill as an indication that one investment is a much better bet. The market thinks the T-bill is a sure thing.

But there are -- the market thinks, or thought last Thursday -- 26 chances in 1,000 that a typical bank will go belly-up in a 13-week period: one chance in 500 each week, or the average bank goes belly-up every 10 years at last Thursday's levels of risk. And not just banks: Every financial institution that borrows short-term and invests in assets that have value for the long-term, whether it calls itself a commercial bank, an investment bank, a universal bank, a hedge fund or a multipurpose bank, is now in trouble because the market fears that lending to it is risky and so is forcing it to pay through the nose when it tries this week to keep borrowing the same amount of money that it had borrowed last week. The normal level of this T-bill-to-CD spread is much smaller: Up until August 2007 it corresponded to one chance in 10,000 that a typical bank would go belly-up each week, or that the average bank would be expected to go belly-up once every 200 years. The market thinks that the banks are way risky right now.

In large part because the market thinks banks and other financial institutions are way risky, they are. There is a self-fulfilling prophecy element here. No bank or other financial institution can survive for more than a month or two when market risk is at current levels. Banks borrow a lot of money. They lend out a lot of money at a slightly higher interest rate. They make their profits on volume -- on the amount of money borrowed and loaned. Most of their loans are long-term: Their terms don't change when market conditions change. Most of their borrowings are short-term: Their terms do change when market conditions change. The high level of market risk and its rapid run-up from normal levels only a year ago last August means death to all banks, and near-banks, and shadow-banks, and banklike institutions -- unless the economic fever is broken and is broken soon.

"Good riddance!" you might say. "Death to all the banks! Those bankers -- those smug overpaid suit-wearing bastards piously lecturing others on financial responsibility while they collect big, big bucks and wind up with fortunes in the $50 million or more range. Let their institutions die! Let them go bankrupt! Let all the bankers have to get minimum-wage jobs working at the Rubbermaid Plant in Winchester, Va.!" But that would not be wise. I could get behind the Winchester, Va., part -- it has pros and cons -- but the "death of institutions" part is probably not what we want to do.

Why don't we want to do it? Because right now we are relying on our banks and other financial institutions to cushion and manage a great economic migration. Eight million American workers who used to have jobs in construction or in high-end consumer services funded by free-spending yuppies using their homes as ATMs and taking out home equity loans on the appreciation of their residences have lost and are losing their jobs. They have to get other jobs in other sectors.

The natural place for them to go is our export goods and services industries, and our import-competing manufacturing industries, which are expanding rapidly right now as the decline in the value of the dollar gains them market share from Americans and foreigners who now find it cheaper to buy American. But our exporters and our import-competing manufacturers need to borrow money to buy buildings and install machines if they are going to expand. If Wall Street freezes up, then they cannot borrow money -- and the 8 million American workers don't successfully complete their migration across the economic desert to the water hole. And then it gets worse. As domestic spending drops, still more people in other industries that had relied on this spending to create demand for the products they made lose their jobs. Et cetera.

The game that Ben Bernanke and Hank Paulson are playing right now is an extremely tricky one: try to keep the banking system from freezing up; try to restore risk perceptions to normal levels; try to keep finance flowing so that we have a peak level of only 8 million unemployed in America next year, rather than 15 million or more; try to accomplish this while keeping feckless financiers who are responsible for the catastrophic failure of risk management that has gotten us into this from escaping with too large a share of their ill-gotten gains.

Bernanke and Paulson have decided that they need extra help to accomplish these goals: permission to borrow an extra $700 billion on the faith and credit of the United States of America and then use that $700 billion to invest and buy mortgage securities. The hope is that the economy will recover and risk perceptions will drop so fast that the government will make a profit on the deal -- we did, after all, make a healthy profit in 1995-96 on the government's interventions during the last Mexican peso crisis. Bernanke and Paulson do not expect that all the $700 billion requested to buy bad debt will go down the drain -- the expectation for net losses is around $100 billion. But that is a social investment worth making. If the bailout ends up preserving the jobs of 5 million Americans during the next two bad years, then we have about $50,000 x 5,000,000 x 2 = $500 billion on the plus side. Without doing anything, therefore, we'd be down $500 billion instead of just $100 billion. A 400 percent net profit rate is a good deal.

Treasury Secretary Paulson has a plan: give him the $700 billion and trust him.

The big problem is that it is unlikely that he will still be Treasury secretary on Jan. 21, 2009, and there is a 48 percent chance that the next Treasury secretary will be chosen by a man who thinks Sarah Palin is the American most qualified to be vice president. Sen. McCain's chief economic advisor is former Sen. Phil Gramm, the prime architect of the financial deregulation of the past two decades and a true believer that deregulation was for the best. He would not implement the Troubled Asset Relief Program the way that Paulson would -- indeed, he probably would not want to implement it at all.

Sen. McCain's second most prominent economic advisor is ex-Hewlett Packard CEO Carly Fiorina, who was issued a $21 million golden parachute by Hewlett Packard's board of directors if she would just go away and not manage the company anymore. She does not seem to be someone to set up as a watchdog to reduce the sizes of the fortunes that the feckless escape the wreck carrying. And it is not our way to issue blanket grants of unreviewable power. We believe in checks and balances, separation of powers, accountability to the law. The idea of issuing blanket authority to officials to do what they see fit belongs not to the American republic but to the Roman Republic. Remember the Roman Republic's grant of imperium -- unlimited discretionary power -- to Gaius Julius Caesar covering the provinces of Cisalpine Gaul, Transalpine Gaul and Illyria? Remember how that turned out? Trust is OK, but verification is better.

Sen. Chris Dodd, chairman of the Senate Banking Committee, has the responsibility for writing the bill to give Bernanke and Paulson the authority they believe that they need. It's a hard problem -- protection of the taxpayer's interest vs. flexibility, punishing the feckless vs. effectiveness at restoring the flow of finance, rescuing deserving homeowners vs. rewarding those who used the housing boom to fund la dolce vita.

The most ingenious and clever thing about how Sen. Dodd wants to structure the Troubled Asset Relief Program is in how the monies the Treasury pays to businesses for the troubled assets it is taking off their hands change classification depending on what happens in the future. If the Treasury is able to sell the assets for a good price, the monies paid by the Treasury were a purchase. If the Treasury is not able to sell the troubled assets ever and must eat a large loss, the monies paid by the Treasury are deemed to have been an investment in the firm -- and the government and the taxpayers own a pro-rata share of the firm, and get a pro-rata share of the dividends and the capital gains the firm earns in the future.

It's exciting to watch, if you are an economist.