"Our economy is in serious danger," the president told Americans. Be very, very afraid. 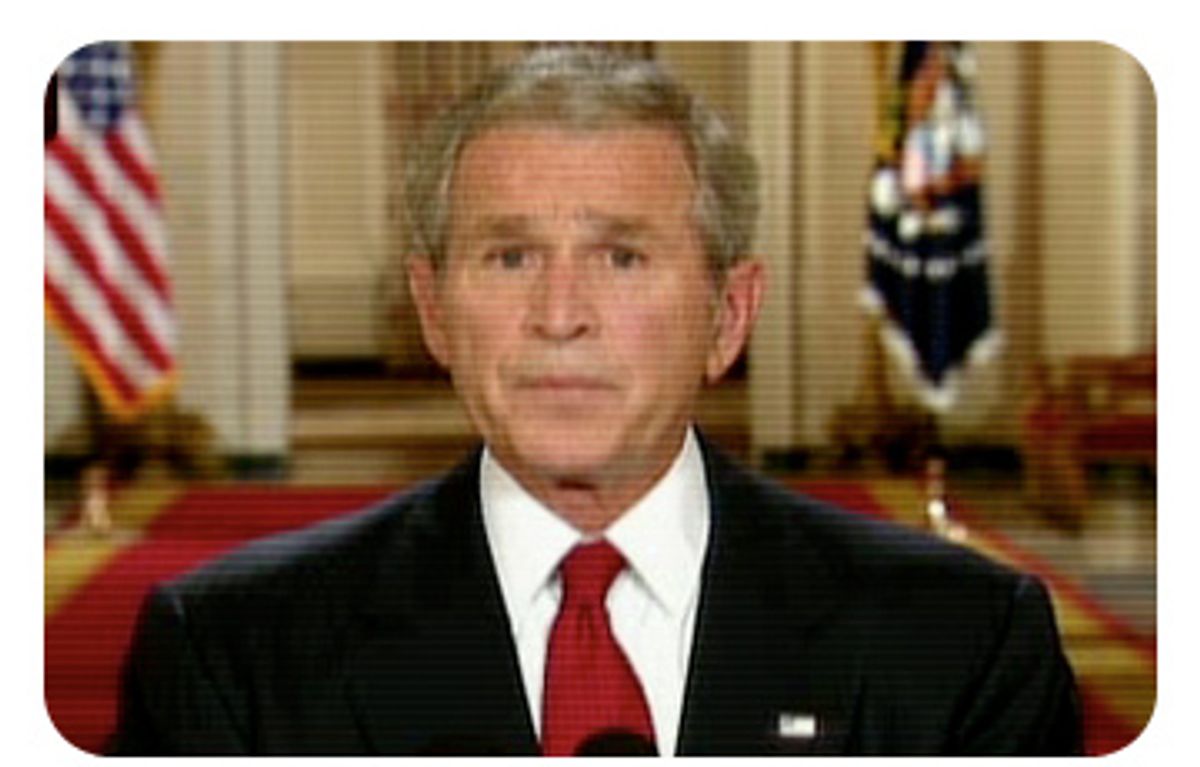 No matter how you feel about George Bush's credibility, it is unnerving to watch the president of the United States stare his country in the eye and declare that "we are in the middle of a serious financial crisis" and "our economy is in serious danger."

As a rule, presidents in moments of national crisis aim to reassure a nervous populace. But on Wednesday night, Bush faced a unique challenge -- convincing his country that the United States is in such dire straits that we have no choice but to expeditiously enact the Paulson plan to spend as much $700 billion "so banks and other financial institutions can avoid collapse."

So -- this was no time to channel the ghost of FDR and tell us that the only thing to fear is fear itself. Instead, we were told that we should be fearful, that the "situation is becoming more precarious by the day" and that "the market is not functioning properly, there is a widespread loss of confidence and major sectors of American industry are in danger of shutting down."

But did he succeed in his goal -- which was, as Time's Mark Halperin said on CNN just before the speech started, not so much to convince America that we are in grave danger, but to convince elected representatives of his own party to get with the program? I'm not so sure. I think he made a strategic mistake in devoting the bulk of his speech to a summary of how this all happened. He competently read his teleprompter lines, and for what it's worth, his account was not horribly wrong, although one could call it incomplete, and in my opinion, placed more blame on homeowners taking on loans that they couldn't afford than on Wall Street bankers for their concoction of exotic financial instruments that put everyone at risk.

But that's a story for another day. At this point, the mechanics of how we got here are not the issue -- the problem is that to members of his own party and millions of Americans, the prospect of showering hundreds of billions of dollars on the very people who were instrumental in creating the mess just doesn't seem fair.

Bush was trying to sell the Paulson plan, and to do that effectively he had to explain not just why it would work -- an impossible task, because even Hank Paulson and Ben Bernanke have been unable to achieve that in two consecutive days of public testimony -- but why it was just.

He made one clear concession on the issue of executive compensation -- he said there would be no "windfalls" for executives of companies that would benefit from the bailout (although he never used the word "bailout"). But cracking down on executive compensation, while it may be satisfying to some from a class warfare perspective, doesn't do anything to address the real problems that Americans are having. An effort to slow down the wave of foreclosures racking the country by reworking the terms of mortgages would go a long way to balancing out the billions being bestowed on Wall Street, as would some mechanism for ensuring that American taxpayers benefited if the plan actually works. If government intervention stabilizes markets and brings financial institutions back to health and restores value to mortgage-backed securities, then the taxpayers footing the bill for this rescue should get "a piece of the upside." If we're going to give money to companies to take bad assets off their hands, maybe we should get a share in those companies.

We didn't hear anything about slowing foreclosures or getting equity for taxpayers from Bush. The president said he understands the "frustration of responsible Americans," but I'm not sure he gets exactly how much anger there is in this country at what has happened not just recently, in the economy, but over the entire course of his administration. Most Americans know that the economy is in trouble, even if they don't quite grasp how close we are skittering to a major meltdown. But what makes some of us maddest is to think that the people who have benefited most from the culture of deregulation and hands-off government that are supposed to be the watchwords of the Republican Party will be the recipients of one of the greatest disbursements of government largess in history.

Bush said his "natural instinct is to oppose government intervention," but it is precisely the abdication of government responsibility that encouraged Wall Street to go wild. It would be foolish to imagine him ever acknowledging this, but if he wanted to get more than 30 percent of Americans approving his job performance, perhaps a "mea culpa" would be in order. George Bush did not offer an apology for what has happened on his watch.

But maybe more important, I don't think he offered enough assurance to angry Americans or doubting members of Congress that the Paulson plan delivers a fair and equitable resolution to the crisis that faces us.