My prior defenses of Palin's candidacy have been proven wrong. 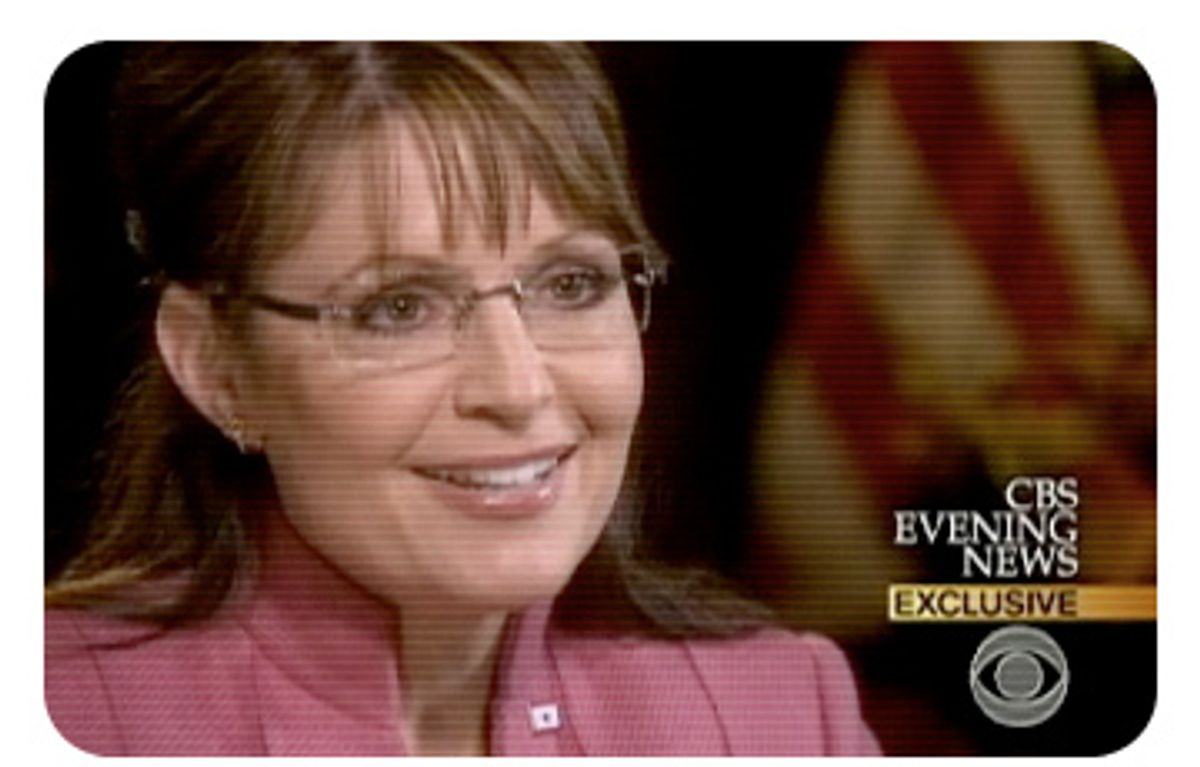 Three weeks ago -- before Sarah Palin's interview with Charlie Gibson was announced -- I mocked the idea that the McCain campaign was afraid to have Palin face our mighty press corps, and I defended Palin as follows:


When they decide in a couple of weeks that Palin is ready to do so, she'll go and sit down with Brit Hume or Larry King or Charlie Gibson or some other pleasant, accommodating person who plays a journalist on TV and have a nice, amiable, entertaining chat about topics that are easily anticipated. . . . .

Sarah Palin isn't Dan Quayle. She is extremely smart -- much smarter than the average media star who will eventually be interviewing her -- and she is very politically skilled as well. She didn't go from obscure small-town city council member to Governor to Vice Presidential nominee by accident. She'll be more than adequately prepared for the shallow, 30-second, rote exchanges that pass for political interviews in our Serious mainstream discourse. Anyone expecting her to fall on her face or be exposed as some drooling simpleton is going to be extremely disappointed. That might (or might not) happen with real questioning, but she's not going to face that.

I was so wrong about that -- the parts about Palin, that is, not the press (though, in fairness, Gibson was far more adversarial than I expected and Katie Couric was even better). Just watch these clips from her interview last night with Katie Couric. I'll be honest: watching this, I actually felt sorry for Sarah Palin:

I still think Palin is probably perfectly smart. And in this age of dynastic and nepotistic political power centers in both parties, I admire the fact that she created her political career out of nothing, with no parental connections or vast family wealth assisting her (the fact that Barack Obama did the same thing was, in my view, one of the very few meaningful differences between him and Hillary Clinton). I still think her selection was a very politically shrewd move by the McCain campaign. And I remain largely unbothered by her so-called "lack of experience" for the same reason that this has never bothered me about Obama -- someone's judgment, intellect and views are infinitely more important than how long they've held various political posts, and the fact that someone largely exists outside the Washington establishment is, in my view, a positive -- the further away the better. In fact, one of the most disappointing (though not surprising) aspects of Obama's candidacy is how quickly and completely he's morphed into a standard Washington establishment candidate.

But Sarah Palin's performance in the tiny vignettes of unscripted dialogue in which we've been allowed to see her has been nothing short of frightening -- really, as I said, pity-inducing. And I say that as someone who has thought from the start that the criticisms of her abilities -- as opposed to her ideology -- were much too extreme. One of two things is absolutely clear at this point: she is either (a) completely ignorant about the most basic political issues -- a vacant, ill-informed, incurious know-nothing, or (b) aggressively concealing her actual beliefs about these matters because she's petrified of deviating from the simple-minded campaign talking points she's been fed and/or because her actual beliefs are so politically unpalatable, even when taking into account the right-wing extremism that is permitted, even rewarded, in our mainstream. I'm not really sure which is worse, but it doesn't really matter, because with 40 days left before the election, both options are heinous.

What seems most likely is that she's perfectly conversant in the exceedingly narrow and parochial range of issues she's concerned herself with as Wasilla Mayor and Alaska Governor -- oil drilling on the North Slope, specific local budget items, corruption issues inside the Alaskan State GOP, and evangelical and religious matters. She really doesn't seem to have any thoughts about anything outside of that -- or if she does, she is suppressing them -- and is thus capable of spouting little more than empty right-wing slogans. That's what makes all the issues raised by the excellent on-scene reporting by Salon's David Talbot more significant than it otherwise might be -- she could be a religious fanatic with an extremist agenda, or a power-crazed, vendetta-fueled, secrecy-obsessed Cheney-ite, or something else altogether. She may not even know what she is, and we're clearly not going to find out.

I've also thought for the last several weeks that people like Andrew Sullivan were being unduly critical of the McCain campaign's Palin media strategy. That strategy didn't strike me as particularly unusual or alarming. It's common for campaigns to be selective about their chosen interviewers, and it didn't strike me as significant -- or bothersome -- that they wanted to give Palin some time to acclimate to the national scene and prepare herself before submitting to standard press questions. I was wrong about that, too.

Between that bizarre episode at the U.N. yesterday where they basically physically blocked her from answering even innocuous questions to their desire to "postpone" the Vice Presidential debate, it's now conclusively, disturbingly clear that the McCain campaign really does intend essentially to shield her from any and all media scrutiny until the election. I no longer think this is careful media strategizing by the McCain campaign but instead is motivated by what Greg Sargent said last night:


The lengths the McCain campaign is going to in order to shield Sarah Palin from questioning are reaching truly comic dimensions . . . What's really sobering is that the McCain campaign continues to block Palin from answering questions even though it's now resulting in reams and reams of bad press for the McCain-Palin ticket. That suggests McCain advisers know that letting her answer even the most elementary questions in an uncontrolled environment is so dangerous that it's worth weathering the current media drubbing they're taking in order to prevent it from happening at all costs.

Vice Presidents matter much more than they did before. So much unfettered power is now vested in the Executive that it's inevitable that the Vice President will wield significant authority. McCain evinces little interest in domestic policy, and the fact that he will be beholden to her and her Dobson-ite base if she wins makes it highly likely that she will exert substantial influence over numerous important areas. All of that, combined with McCain's age -- and what really do appear to be legitimate and growing questions about his health (those are mere suspicions, but appropriate ones that should be answered by McCain) -- makes Sarah Palin's candidacy a very real hazard, something that, by the day, I'm convinced is as important as any other issue in the campaign.

UPDATE: On a somewhat (though not entirely) unrelated note, Robert Farley responds and objects to my post of yesterday concerning the first permanent, standing deployment of a U.S. Army brigade inside the U.S. for law enforcement purposes since Reconstruction. I respond in comments, where a somewhat contentious discussion ensues. Even after the last 8 years, there are still plenty of people -- including, apparently, liberals like Farley -- who dismissively wave away concerns about presidential seizures of radical, dangerous and possibly illegal powers as nothing to worry about. That mentality bodes well for the McCain/Palin ticket and for authoritarian policies in general, and explains much of what has happened during the Bush era (throngs of people like Farley who mocked objections to Bush's radical executive power theories as "handwringing").

UPDATE III: Just to address what Kos said here, I've never believed that Democrats should ignore Palin and focus only on McCain. Quite the contrary, I've long argued that much more focus needs to be paid both to Palin's beliefs and her conduct in office, and have written much about those topics (see here, here and here, for instance). It's true that Palin, if uncriticized and left alone, would have remained highly popular and been a real political force for McCain.

I just thought that her real vulnerabilities -- the things Democrats should focus on -- were her extremist ideology and corrupt, power-abusing actions in office, not that she was incapable of answering questions from reporters or mastering political issues. That's where I was wrong -- and see here for still more evidence of just how shockingly incapable she is. That's more than just being inarticulate. It's exhibiting a complete inability to formulate a coherent thought about core issues.