Spike Lee pulls out all the stops with this sprawling World War II drama. 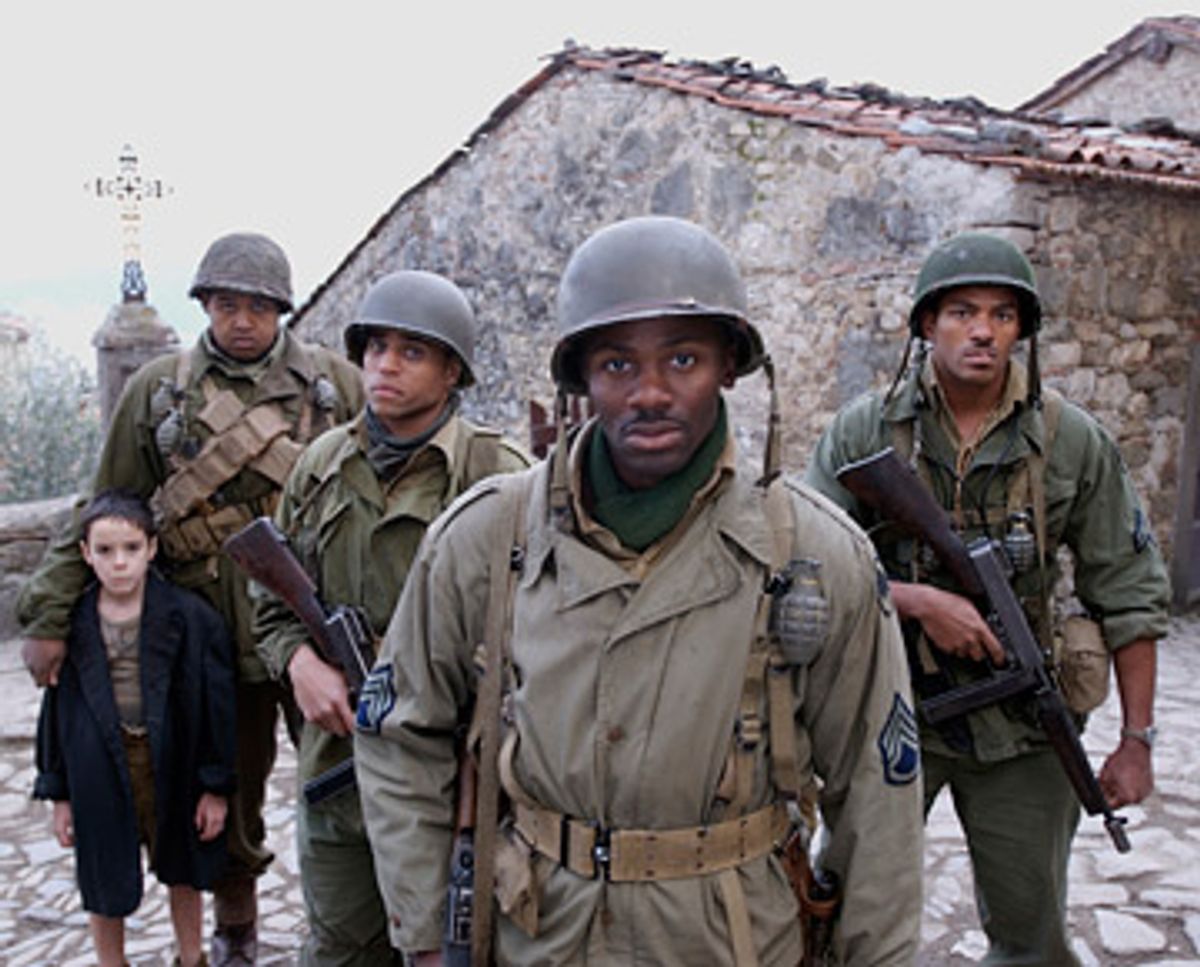 Spike Lee's "Miracle at St. Anna" is an ambitious sprawl, a picture that's dramatically compelling in some places and plodding and didactic in others. It's also occasionally moving, even when it bends too close to sentimentality. Watching it, I got the sense that Lee had simply decided to pull out all the stops, to sink himself into one hell of a story -- part World War II drama, part mystery, part meditation on what it means to fight for a country that might not give a damn about you -- and see where it might lead him. Unfortunately, it leads him in circles. And yet there's enough vitality here to keep the picture going, even through the rough patches.

"Miracle at St. Anna," based on James McBride's novel of the same name (McBride wrote the screenplay himself), begins in 1983 with a murder in Harlem, and the plot thickens when the police discover, tucked away in a crumpled Macy's bag, a rare artifact: a marble head that lost its body when the Nazis blew up a Florentine bridge. The head is less the key to the story than a placemarker to help us find our way through it: The back story to the murder occurs in 1944, in Tuscany, as four members of the 92nd Infantry -- consisting of soldiers of color, who also went by the name "Buffalo Soldiers" -- make their way through the Italian countryside fighting what one character refers to as "a white man's war." They've been hung out to dry by a white superior officer, a Southerner who chooses to disbelieve the soldiers' reports that they've made it behind enemy lines; he orders artillery strikes on their position.

Even within the larger war, the soldiers have their own battles to fight: Two of them, Staff Sgt. Aubrey Stamps (Derek Luke, in a taut, moving performance) and Sgt. Bishop Cummings (Michael Ealy), are perpetually at odds: They can't agree on whether the country they're fighting for is worth the trouble (Stamps says yea, Bishop says nay), and eventually they also fight, in a way, over a woman, a bright, comely Italian named Renata (Valentina Cervi). The two other soldiers in the group are Cpl. Hector Negron (Laz Alonso), the only one who speaks Italian, and thus the only one who can communicate with most of the locals, who may or may not be partisans; and Pvt. Sam Train (Omar Benson Miller), a big, gentle lug who has saved the life of a small Italian boy (the wide-eyed Matteo Sciabordi). That boy, it turns out, has survived a horrific tragedy that's linked to the activities of a partisan fighter known as the Great Butterfly (Pierfrancesco Favini), a guy who's done so much damage to the Nazis that they're hunting him mercilessly.

In case you haven't guessed, this is an extremely tangled story, and Lee doesn't always keep the various threads under control. There are times when he goes overboard to make his points: It's entirely possible that a white officer during World War II might have left black soldiers to die, just because they're black; on the other hand, mired in enemy territory, even the most racist commanding officer probably wouldn't be keen on losing able-bodied soldiers, regardless of their color. The movie is more effective when it explores the ways in which issues of race divide the black soldiers themselves: They can't come to an agreement on whether or not their country is worth fighting for, partly because they recognize, without ever spelling it out, that their "country" is actually many countries: a place where a black man can work hard and build a life for his family -- but also a country where he can't be served at certain lunch counters.

Lee takes almost three hours to tell his ever-more-complex story, and there are long patches of the movie that are dull and lifeless. But Lee does pull off some crisp and brutal battle sequences -- he makes us feel their weight, without giving in to sensationalistic effects. And there are some nicely handled smaller moments, too: When Train saves that strange little Italian boy -- we later learn his name is Angelo -- the kid's eyes flutter open to take in the vision of this hulking black man before him, and he murmurs, "A chocolate giant!" It's one of those loopy things that little kids say when they don't know any better, and Lee is keyed in to the sweetness of it. "Miracle at St. Anna" sometimes feels like three or four movies, of varying degrees of effectiveness, jammed into one. But it's often fascinating to watch, if only to follow the trail of where Lee's instincts take him. He doesn't quite pull off "Miracle at St. Anna." Still, it's one of those semi-failures that has more life in it than some directors' successes do.