More than just a beautiful face

Gorgeous, sure, but it was Paul Newman's sly spark that made us love him -- and he never stopped reinventing himself. 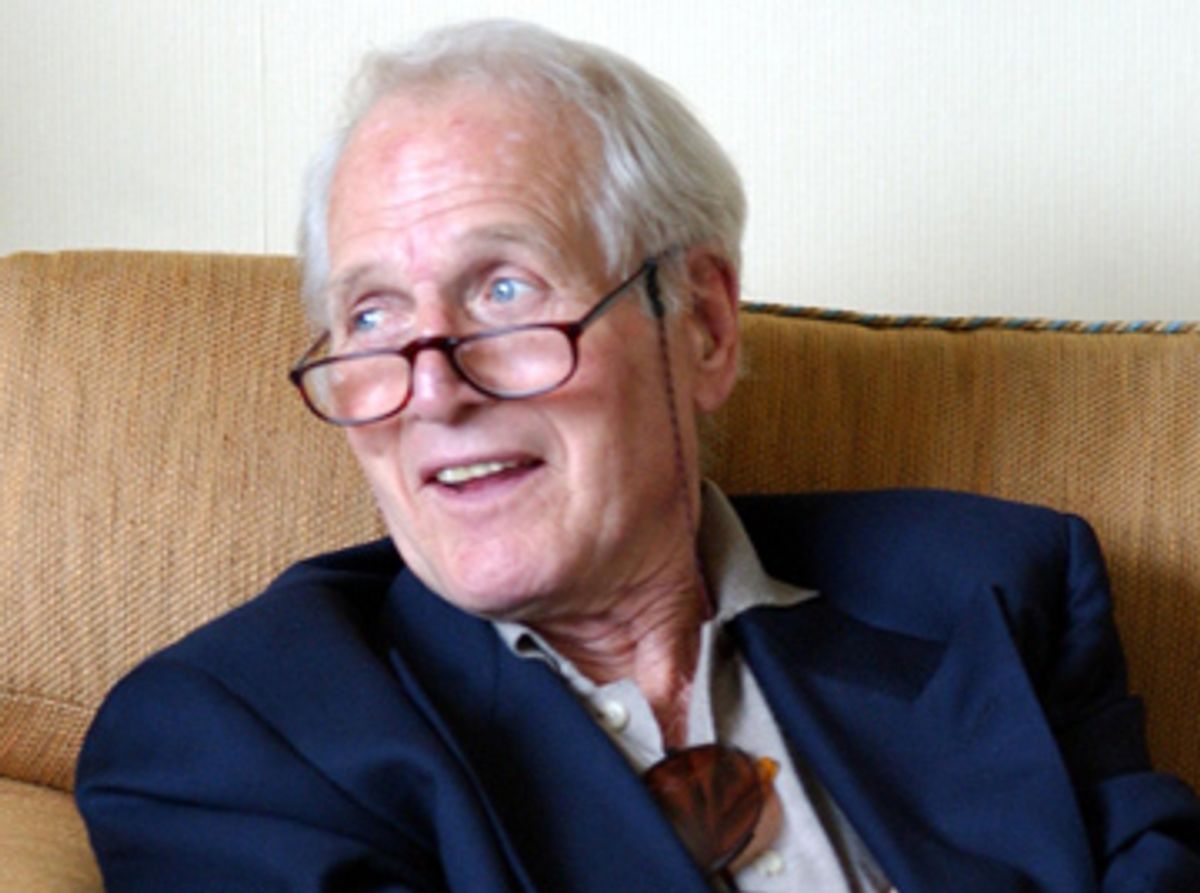 There are a thousand and one reasons we go to the movies, but to get to the heart of perhaps the biggest one, all we have to do is look at one face. Paul Newman was always beautiful, as you know if, flipping channels, you've ever come across his first movie role, in the 1954 sword-and-sandal romance "The Silver Chalice." He looked like something Donatello might have dreamed up, his eyes turned down just the slightest bit at the corners, his mouth perpetually ready for kissing. Still, we all know that great-looking actors are a dime a dozen. The best of them are also informed by something that comes from inside, a mischievous spark, a sly sense of self-deprecation that suggests they don't take themselves all that seriously (even when they take their work very seriously).

Newman had both the face and the spark, which may be why he grew into his beauty, not out of it. He was certainly comely in "The Silver Chalice"; you wouldn't necessarily look at that face and think there was anything missing. So how is it, then, that he grew more beautiful as the years went by, as Ben Quick in "The Long Hot Summer" (1958) or as Eddie Felson in "The Hustler" (1961)? Or as a young, party-loving Nobel Prize winner in "The Prize," or as half of an outlaw dream team in "Butch Cassidy and the Sundance Kid" (1969)? Particularly given the way we've come to think of age as an actor's enemy, it's now unthinkable that a performer might get better looking with each passing birthday. Did Newman really become more beautiful before our eyes? Or was it simply that, year after year, he kept fulfilling our dream of beauty, filling in the blanks of desires we didn't know we had?

Newman's beauty never peaked; it simply kept evolving into something new. I happened to catch a glimpse of him, in real life, very briefly one night in 2005, after a special screening of George Clooney's "Good Night and Good Luck," as he quietly slipped into a waiting car. He looked frail, maybe, but I didn't have to use my imagination to see the young man still alive in the old one. It occurred to me then, and I think of it again now, that while it's impossible to stay young forever, it's entirely possible to carry the best aspects of youth within you, even as your bones, your joints, your very cells, conspire against you.

And how, specifically, might an actor carry youth with him, as Newman did? In the early 1950s, he trained at the Actor's Studio, and if his performances haven't always been strictly Method, his demeanor has always embodied some of the Method ideals: He was always a responsive actor, a listener, always reaching out instead of just taking in. Newman came up as an actor by working in television in the '50s, working with the concurrent generation of directors, including Sidney Lumet, Arthur Penn and Sydney Pollack, who were making plays and playlets that would air on programs with names like "The Philco Television Playhouse" and "The Kaiser Aluminum Hour." That's a journeyman's approach to the profession that's all but lost today. And while Newman has always been a good, solid actor, he hasn't always been one kind of actor, as my friend and colleague Steve Vineberg explained beautifully in his 1991 study "Method Actors: Three Generations of an American Acting Style." Vineberg makes the case that although Newman has always been a terrific and appealing actor, his finest performances may be the post-1970 ones, like those he gave in "Slap Shot" (1977), "Absence of Malice" and "Fort Apache, the Bronx" (both from 1981). Vineberg writes:

"A backward glance through Newman's career shows a growth synonymous with a naturalistic ideal. To return to the words Calvin Tomkins used to describe the paintings of the American realist Thomas Eakins, he's 'looked so long and so unflinchingly at the surface of things that he has gone right through to the heart of them.' That is, he now lives the kinds of characters he could only guess at in his early years, when he played the eager, troubled young soldier in 'Guilty Is the Stranger,' the street-educated boxer in Somebody Up There Likes Me, the athlete who despises pretension in "The Eighty-Yard Run." He's married the lessons he learned at the Actors Studio in the 1950s to the qualities that made him so much fun to watch on screen in the 1960s: Now he has a good, relaxed time on camera in character, and (the cornerstone of the Method experience) he can articulate pain so sharp and devastating that it can't be shaped into words, and he can do it without histrionics."

We all know that the actors we love best aren't necessarily nice people. But I can't imagine anyone has ever come out of a Paul Newman movie thinking, "Gee, I'll bet that guy is a jerk." And everything we know about this intensely private man -- about his philanthropy and his devotion to his family -- suggests that he was the kind of actor who put life, and not performing, first.

Not paradoxically, maybe that's what made him such a great actor in the first place. If the point of Method acting is for a performer to take something of himself and pour it into a performance, then perhaps Bob Dylan inadvertently hit on one of the secrets of the Method, as well as life, when he wrote the line -- itself borrowed from deep-rooted Judao-Christian values -- "He not busy being born is busy dying." Come to think of it, maybe that's a beauty secret, too. One of the frustrating things about the growing prevalence of cosmetic surgery is that it deprives actors of the faces they were meant to have. Newman, while admittedly in possession of great genes, accepted every physical change and put it to work. In giving us their faces to read, actors give us many things. Newman's face, year after year, has given so many of us countless hours of pleasure. It also tells us that in his work, and probably in his life, he was busy being born, until the very last.