Clinton: Yes, we can fix the economy

Back on the campaign trail in Michigan, this time for Obama, Hillary Clinton urged her former supporters to get behind the Democratic ticket. 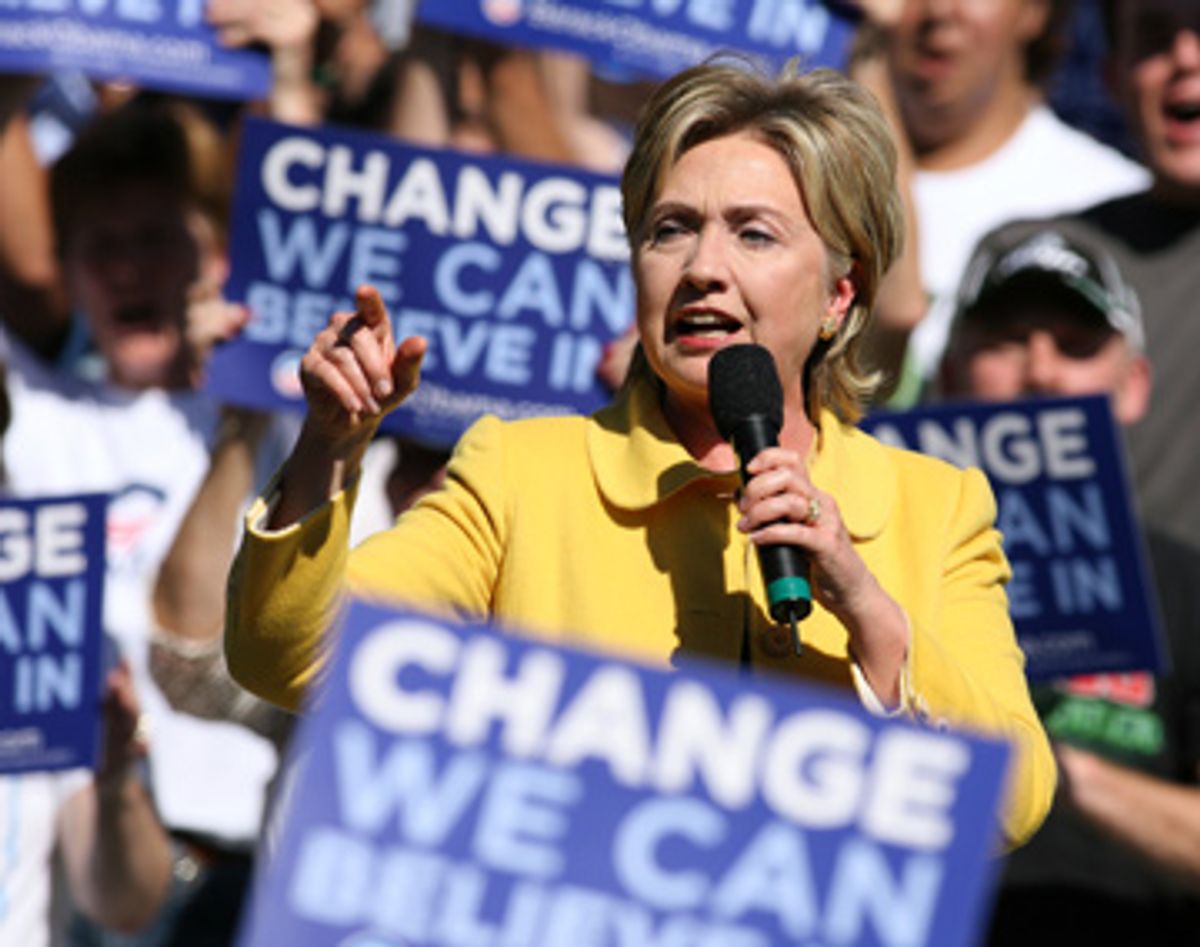 It was a gorgeous fall Saturday in a battleground state. The sun was out, the crowd was fired up and Hillary Clinton was rolling. "The next president is going to inherit a lot of problems," she told a thousand or so cheering supporters on a hill overlooking the Grand River. "We saw that over the last couple of years, but it's even more acute right now. Therefore, we need a president with good, new ideas; with an ability to think outside the box, who can bring in people from all walks of life to advise and suggest about what needs to be done."

The main points of the script, though, probably weren't quite the ones she thought she'd be delivering in Michigan this weekend, if you'd asked her a year ago, before the primaries heated up and before Barack Obama beat her to the Democratic nomination. "There's no doubt in anyone's mind that Sen. Obama understands the economic challenges we face, as well as the need to change the way we do business at home and here in the world," Clinton said. "I shared a debate stage with Barack about, oh, 22 times -- but who's counting? And I'm now campaigning as hard as I can to make sure he's our next president -- and I think last night [at the first presidential debate] a lot of Americans saw why."

Clinton is, at this point -- with 38 days left before the election -- just another loyal soldier in the Obama army; her aides are quick to tell reporters she'll go wherever she's told, whenever she's told, by Obama's strategists in Chicago. Since Democrats escaped the media-generated Clinton vs. Obama drama at the convention in Denver, Clinton has already hit Ohio and Florida on behalf of her one-time foe. Now go to Michigan? You got it, Barack. On the same day, Clinton's political action committee also sent some of her supporters to New Hampshire to canvass on Obama's behalf as part of a new program called "Hillary Sent Me!"

Yes, on some level, her Saturday running around the Wolverine State must have brought up some wistfulness. (Her staff declined to make her available to Salon for an interview.) Clinton was the only Democrat who left her name on the ballot for the state's outlaw primary back in January, and she won 55 percent of the vote (the rest went to "uncommitted"). Eventually, the decision in June to strip some of Michigan's convention delegates and award some to Obama (giving him all the votes that went to "uncommitted") was the final death knell for her presidential campaign. She never came to the state during the primary battle, obeying an edict from the national party that all candidates stay away, and she finally thanked Michiganders for their support on Saturday.

"I am very grateful for the support that many people in Michigan gave me," Clinton said. "You have been stalwart supporters, and I will never, ever forget it, because I care deeply about what happens to our manufacturing sector and what happens to small towns and cities." The crowd cheered her on, but this was an Obama rally, make no mistake. When someone tried to start up a "Hill-a-ry! Hill-a-ry!" chant, it died out quickly, and organizers ran out of Obama-Biden signs so fast that after the event, supporters were trying to buy them from the people who got one.

It's no mystery why the Obama camp wanted Clinton here. The small towns and cities of Michigan are some of the places that are hurting the most after eight years of the Bush economy; the state has long had the sad distinction of occupying the bleeding edge of any U.S. downturns (but it wasn't doing as badly when Clinton's husband was the president). Clinton swung through Grand Ledge, just outside Lansing, then flew to Grand Rapids, something of a Republican stronghold to the west, before wrapping up with an evening rally in Flint, Michael Moore's hometown. (Unfortunately, her schedule wound up in flux all day, as a Senate vote back in Washington delayed her arrival in the state. She got to Grand Ledge hours after most voters showed up expecting to see her, but then she hopped into a plane to fly to and from Grand Rapids and wound up nearly an hour early to the Flint stop.)

She was addressing the people Obama once called "bitter," on a mission to convince them they need him now as much as he needs them to beat John McCain. Polls show Obama has opened up a bigger lead here in the past couple of weeks, but he's got to hold on to voters concerned about the economy to win in November. "People in Michigan are beginning to really cast their votes for Barack," Clinton said. "The numbers keep going up, but I don't take anything for granted, and I don't think any of us should, because this will be a close election."

Quite a few of Clinton's former supporters came out to hear her Saturday, and they were glad to have the chance. "I believe she understands exactly what the middle class in America needs, especially the state of Michigan -- change," said Marty Taylor, 51, from Lansing. She was wearing two buttons -- one that compared Obama to John F. Kennedy, and one that celebrated Clinton's campaign. "Somebody that cares about us, somebody that understands that the middle class is what built our country, and we are going down the drain." Taylor retired after 31 years as an autoworker, and now works at the Curves fitness center in Grand Ledge (where they closed just in time for her to make it to the Clinton rally -- not because of the event, though "we did mention it to a few of the ladies that were in this morning"). Thanks to a United Auto Workers contract, General Motors still pays her health benefits, but Taylor doesn't expect that to last too long. "Our auto industry was our bread and butter, basically, and the bread is gone and the butter is shortly going behind it," she said.

With the economy as bad as it is, Taylor didn't have much trouble getting on board with Obama. "We were all crushed when she didn't get it, but I'm hoping everyone's switched their allegiance from her," she said. "I believe in him, too. I think that he is a real person's person."

Standing nearby, another Clinton supporter, Genny Buffone, chimed in. "He's fresh, he's young," said Buffone, 55, a hospital technician from Holt, Mich. "I'm tired of old, white men in the White House," Taylor said, laughing. Neither one of them was too impressed by McCain's new pal Sarah Palin , who was supposed to help Republicans pick up working-class women. "That was a joke," Buffone said.

Most of Clinton's remarks Saturday would have worked just as well if she were the candidate as they did on Obama's behalf -- they both had the same basic economic message during the primaries, and from now until Nov. 4, there's not much else any Democrat will be talking to voters about besides the economy. "The disparity between the rich and the middle class was not like it is today" when Clinton grew up in Illinois, she said (and people yelled back, "Right!"). "It is a giant gulf and it's eating away at our society." McCain, she told voters, would just keep things the way they are now. Obama would bring change.

There were a few lines more focused on, well, Clinton, than on anything else. "I started warning about home foreclosures two years ago," she said. Later, she reminisced a little. "This has been an extraordinary experience for me -- being able to crisscross our country, running for president, never thinking I would do such a thing in my life -- running against some great public servants, having it come down to Barack and me, where either way we were going to break all kinds of barriers and win on behalf of the American people." If not for the fact that her motorcade was much smaller, and for the Obama sign on the podium, Clinton might have seemed like the candidate at times. But she never hesitated in urging people to vote for Obama, who -- along with Michelle Obama and Joe and Jill Biden -- will be in Detroit Sunday. (Clinton didn't stick around to see their rally.)

Obama himself might be hard-pressed to come up with a get-out-the-vote tactic that motivates people like the story Clinton told Saturday afternoon about what could happen the day after Election Day. "Let's assume that, you know, the election and the counting goes late, and you just can't stay up any longer, so you go to bed, and you wake up, and you're afraid to find out what happened," she said. "So you kind of slow walk it -- you know, you brush your teeth for 10 minutes, like the dentist always tells you anyway, you make your coffee extra strong, and then finally, you know, you gotta figure out what happened. Think how you will feel if it's four more years [of a Republican administration]."

Shouts of "No!" rose up from the crowd, which was hanging on every word. "I don't think that's a really good outcome for Michigan," she said. "Contrast that to how excited you'll be if change has finally come! Yes, we can, and yes, we will!"

By the end of the speech, the primary fight seemed as if it was years ago. Watching Clinton Saturday, you would have thought she was an Obama supporter from Day One.