Why the bailout is not like the Iraq war

For starters, we know where the weapons of mass destruction are located 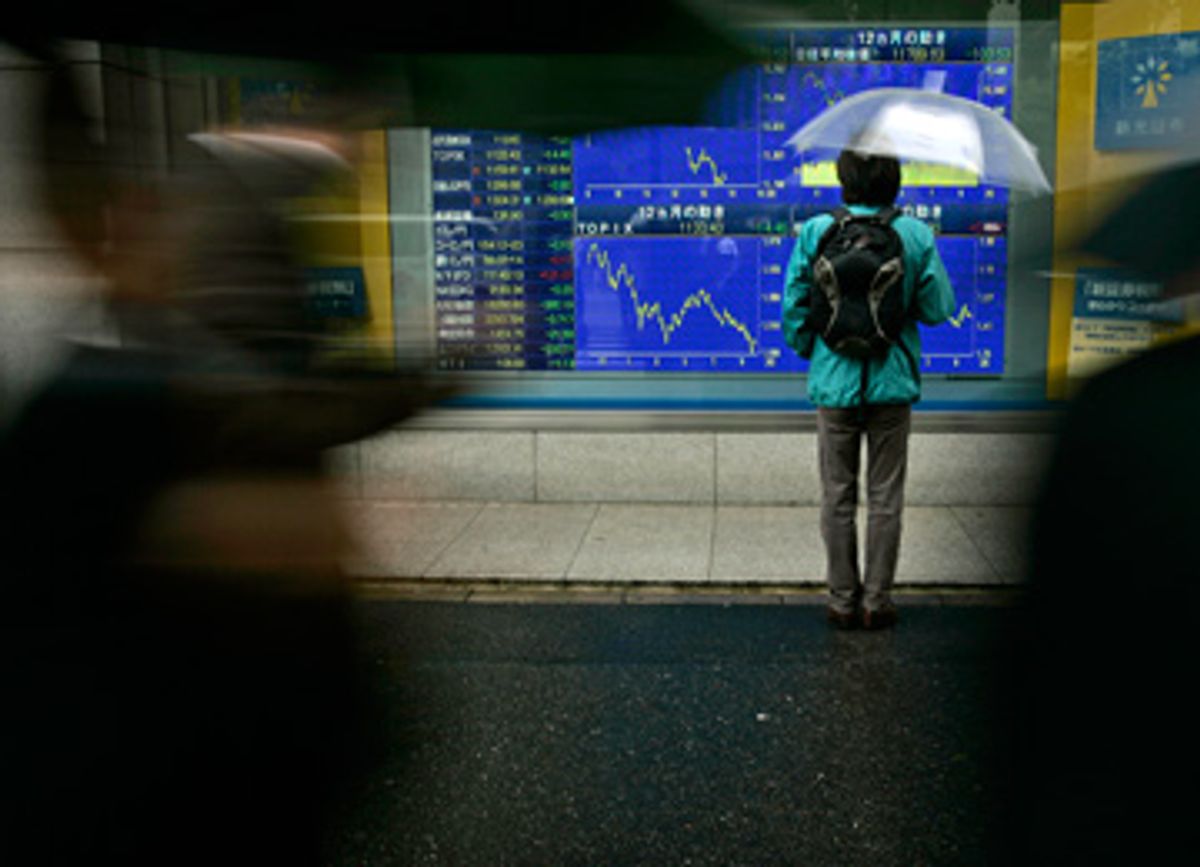 People walk past a display showing financial data in Tokyo September 29, 2008. Japan's Nikkei average fell 1.3 percent on Monday, down for a third day as investor caution about the implementing of a U.S. bailout plan for the financial sector outweighed initial relief that a deal was being done.

A bailout deal may be coming up for a vote in Congress, but the news that the federal government has organized another bank rescue -- Wachovia to Citigroup -- proves that the financial crisis is ongoing and unlikely to be resolved soon, no matter how many imperial powers are bestowed upon Hank Paulson.

But does the $700 billion deal make Paulson the Donald Rumsfeld of the economy? Over the last week, critics of the bailout, generally from the left, have delighted in drawing parallels between the rush to invade Iraq and the rush to bail out Wall Street. Paulson is the new Rumsfeld. The bailout plan is an "Authorization to use Financial Force." The process has been pushed through too quickly, alternatives haven't been properly explored, and the cost is unthinkably huge.

Plenty of reasons exist to dislike the bailout, and in a perfect world, a financial intervention on this scale would be mulled over at our leisure and crafted with care. But this is far from a perfect world, and the Iraq metaphor just doesn't hold up.

1) Most obviously: In the financial crisis, we have found the "weapons of mass destruction" -- the exotic financial derivatives whose proliferation created what Warren Buffett called a "daisy chain of risk." The dominoes are falling. Bear-Stearns, IndyMac, Fannie and Freddie, AIG, Lehman, Washington Mutual, Fortis, Wachovia... If nothing is done, massive job losses and a severe economic contraction will follow.

2) U.S. military intervention in the petro-states of the Mideast was a cherished neoconservative policy goal. I defy anyone to find evidence that the nationalization of the financial economy was a similar neocon wet dream. Quite the opposite: the bailout is a de facto recognition that New Deal-style government intervention in the economy is necessary and justified in extreme circumstances. The catastrophic undermining of 30 years of triumphant deregulatory ideology can't possibly be what the Bush administration had in mind when it took office eight years ago.

3) The invasion of Iraq lowered America's standing in the world, weakened relationships with longstanding allies, and harmed chances for collaborative action to address other hot spots of instability. I haven't polled the rest of the world on the bailout, but my guess would be that large swathes of humanity would rather the U.S. spend many hundreds of billions of dollars in an effort to prevent global markets from collapsing than do nothing, and potentially set off a global depression. They might point fingers at us and smirk, but that's a price we'll have to pay.

It's embarrassing, it's enraging, it's hasty and it is obscenely expensive. But the bailout is not like the invasion of Iraq.