Obama and Biden campaign hard in the Wolverine State, where a loss -- although not anticipated -- could spell disaster for Democrats on Nov. 4. 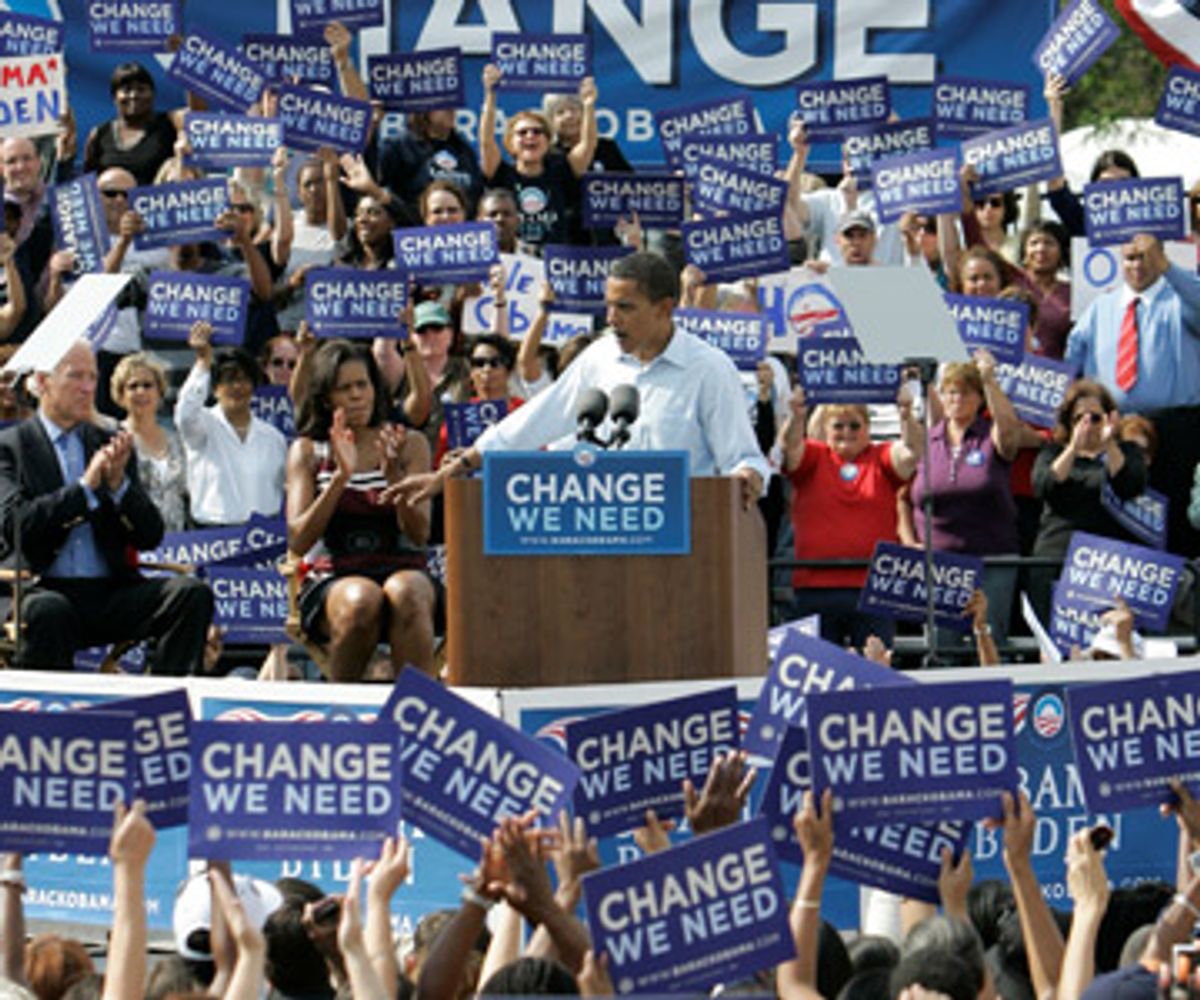 If John McCain wins Michigan, he'll almost definitely be the next president, and Barack Obama knows it. "I'm assuming most of you are registered" to vote, he told a huge crowd downtown here on Sunday. "Anybody here who's not registered, 'fess up. If every single one of you go out and find one more person -- or two more people -- to register, think about what that could do. That could be the difference maker here in Michigan. We need you."

Despite all the talk about expanding the map, Obama's own strategists don't see much of a path to the White House if he doesn't carry Michigan's 17 electoral votes, and neither do Republicans. Michigan hasn't gone for a Republican since 1988, and it would be hard to find enough votes elsewhere to make up for its loss. With unemployment rates near 9 percent, Michigan ought to be Obama territory this fall; Obama has widened his lead over McCain in recent polls. But just to make sure, Obama and Joe Biden -- and both men's wives -- came to Detroit to help make a final push in the last week before voter registration closes. It was the third, and last, rally this weekend with the whole Democratic ticket, after stops in North Carolina and Virginia.

The rally made a few blocks of downtown Detroit look like the city had never suffered through the slow collapse of the auto industry or seen its population drop by half over the past few decades. Packed between the Detroit Institute of the Arts and the city's majestic-looking public library, a crowd of 35,000 people stood in the sunlight and watched the Democrats hammer McCain. "I love Republicans talking about values, I can hardly wait for this values debate," Biden said. "I love it. I've had it up to here. Ladies and gentlemen, lemme tell you what Barack and I value. We don't measure progress by how many regulations we've cut."

For Obama, the key to winning Michigan will be a huge margin in Detroit, winning in some of the state's smaller cities and cutting McCain's margin in conservative areas. And then it all comes down to the Detroit suburbs. Which might be why the music at the rally tilted more toward country than Motown, and why both Obamas and both Bidens happily held up Red Wings jerseys that the hockey team's owner's daughter gave them before she introduced Biden. Inner-city Detroit may not be nuts about hockey, but plenty of swing voters are.

All weekend, Obama's army of canvassers was out in the suburbs (and the rest of the state), talking to undecided voters and registering supporters. While Michigan may be hurting economically, plenty of people still aren't quite sold on Obama. "It seems like the rich keep getting richer, and the middle class -- things have been getting tougher for me in the last few years," Fred Butler, 49, an engineer for Chrysler from Bloomfield, Mich., told Obama volunteer Matthew Toth on Saturday. "The war is another big thing ... I think we should probably wrap that up as well." But even though he was practically repeating Democratic talking points, Butler wasn't sure what he'd do. He didn't vote in 2004, but he will this time because things have gotten worse for him. It just might be for McCain. "Obama seems a little more radical than McCain," he said.

Some of Butler's neighbors in a section of Bloomfield where blocks alternate between huge McMansions and ramshackle ranch homes were equally torn. (Most of the McMansions on Toth's canvassing list were in a gated community, where a security guard politely -- but firmly -- told him he couldn't come in to talk to voters.) "Obama, he is awfully young ... I just think McCain has been there, done that," said Carole Newsbaum, a retired hospital worker and, like Butler, a registered independent. "I feel better with him in that sense." There was something else Newsbaum didn't like about Obama. "I'm afraid he's a target, and he'll be in there about a year, and he's gonna get killed, and then we're gonna have an uprising," she said. "It's a bad thing to think of, and he's a good guy, but I'm afraid for his safety, too. There's a lot of hate in this country."

As in other Rust Belt states, Obama's race could have an unpredictable effect on the Michigan campaign. Toth didn't encounter any voters Saturday who brought it up directly, but Newsbaum's concern -- "we're gonna have an uprising" -- seemed a little racially charged (she's white). Campaign aides here said some supporters in Flint received mail with a picture of a half-man, half-monkey and Obama's name written on it.

On the other hand, the black community in Detroit and other cities is as fired up as it could be. "I've never seen this much excitement in the city since Kennedy," said Vernon Alston, 58, an airport worker from Detroit, who was crammed up against a security fence at the rally Sunday. Black turnout could increase enough that Obama doesn't need any white votes he might lose because of his Kenyan heritage. In Genesee County, home of the blue-collar city of Flint, the local Republican Party vice chairman, David Krueger, said he thought Obama was a tougher opponent than Hillary Clinton would have been -- despite the conventional wisdom about who would do better in industrial swing states. "If Clinton were the nominee [black voters] would have felt betrayed by the party, and we probably would have picked up more of their votes than we will women's votes" brought on by Sarah Palin's presence on the Republican ticket, Krueger said.

Unless McCain suddenly introduces a bailout plan to spend $700 billion buying American cars for everyone in the country, though, the economy is likely to matter more than anything else here. "The way the economy's been under the whole thing we've been going through, I mean, forget it," said Kevin Clark, 43, a plumber in Bloomfield. "I got laid off two weeks ago. That just enforces even more" his choice of Obama. "If nothing else just to go back Democrat and get the Republicans out of there," he said. "They've had their eight years -- things are horrible, why not?" The challenge for Obama and his volunteers might be just making sure people translate their frustration over their pocketbooks into a vote. "You been watching TV lately? Oh, 'I approve this message?'" asked Darwin Slee, an auto worker in Bloomfield, when Toth asked him who he was supporting. "Who cares if you approved it? Did you approve half the town being laid off? Apparently so, because they are."

With that in mind, after he got the GOTV message out of the way on Sunday afternoon, Obama stuck to the same economic mantra that you'll probably hear on every one of the next 37 days. "Your paycheck doesn't go as far as it used to," he said. "It's never been harder to save or retire, to buy gas or groceries, and if you put it on a credit card, they've probably raised your rates ... I know these are difficult days. But here's what I also know. I know we can steer ourselves out of this crisis."

He'll have to hope people here agree with him.