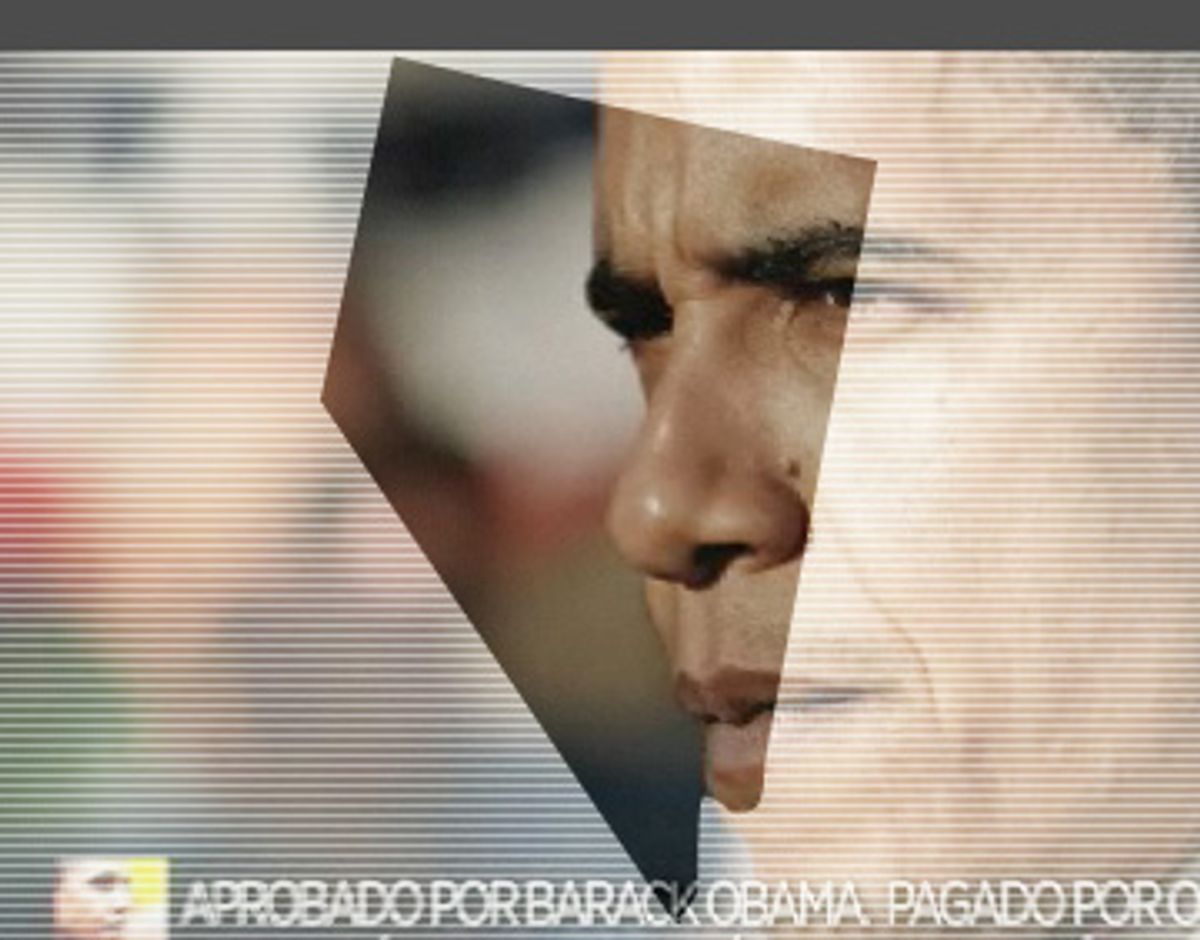 Barack Obama's campaign headquarters in Reno sits in the heart of a bustling neighborhood of Latino clothing stores, taco stands and tax advisors. On a late September day outside of the King Ranch market, across the street from the campaign office, Latino voters spoke in Spanish about their hopes and concerns for the fast-approaching presidential election. Hermilla Sanvicente, 37, who works in real estate and also owns a hot dog stand, said that until this year, she had been uninvolved in politics. "But this time, between friends, we've been talking about it," she said. "It's very different." She will cast the first vote of her life for Obama.

Bill Clinton is the only Democrat to win Nevada in a presidential election in the last 40 years. But the Obama campaign believes that by turning out thousands of newly registered younger and Latino voters, many of whom have been hard hit by a sinking economy, they can capture the Silver State's five electoral votes. Those five votes could be pivotal on a national electoral map that remains too close to call.

If the national race is a dead heat to the finish, Washoe County could indeed play a decisive part. How well the campaigns reach out to Reno's Latino voters therefore could be key: They make up roughly 20 percent of the city's population and 12 percent of its voting population.

Interviews with more than a dozen Latino voters last week, in Reno and in rural northern Nevada, showed that Obama has some momentum, but still has his work cut out for him. Support for Obama was strong in Reno (where he's scheduled to campaign again Tuesday), and included several first-time voters, while in rural Nevada, many Latino voters seemed apathetic about the election. Some small-business owners expressed skepticism about Obama's tax plan, and a few seemed unsure about his level of experience.

But one central theme of the Obama campaign seems to be resonating here. "I want Obama, because the other 'huey' just seems like Bush refried," said Jesus Sanchez, 40, a construction worker, using the Mexican slang for "dude" to describe McCain. In his 23 years living in Reno, Sanchez says getting work has been "worse than ever."

As Erik Herzik, the political science chair at University of Nevada-Reno, puts it, Nevada has been "ground zero of the economic meltdown. Nevada's economy has been turned around like we've never seen before." In August, unemployment in the state hit 7.1 percent, its highest rate in 23 years, above the national average of 6.1 percent. Nevada has the nation's highest home foreclosure rate, a position it has held for the last 20 months, with one in every 91 households receiving a foreclosure filing in August, according to RealtyTrac, a researcher and seller of foreclosed homes. Latinos have been particularly hurt by the foreclosure crisis, and are also heavily represented in the state's beleaguered gaming and construction industries.

The Obama campaign believes that the economic pain here will trump other concerns, such as Latino Catholics' conservative stance on abortion, or historical mistrust between the Latino and African-American communities that some speculate could work against Obama.

"Latinos have been hit hard by the struggling economy -- they're some of the hardest hit by the foreclosure crisis," said Jeff Giertz, an Obama campaign spokesperson. "Tourism and casinos are down, where a lot of Latinos work, so they are looking for solutions on the economy."

But the economy isn't the only worry on their minds. Several Latino voters I spoke with expressed deep concern about immigration reform, including putting a stop to government raids that have sent fear through Latino communities with large numbers of undocumented people. Bruno Limon, 18, a supermarket cashier, said he saw Obama on a Spanish language news broadcast recently in which Obama said he was going to stop the raids. "Maybe some of us shouldn't be here," said Limon, who is a U.S. citizen and plans to cast his first ever vote for Obama. "But they're treating us like criminals."

Of the two presidential candidates, there seems to be greater confidence in Obama's ability to work for immigration reform. In 2005, McCain co-authored a major immigration bill with Sen. Ted Kennedy, but essentially it went down in a blaze of populist revolt fueled in part by right-wing talk radio. Since then, McCain has said he would no longer vote for that bill, struggling to placate the GOP base while also trying to appeal to Latino voters. Rick Garko, a McCain spokesman, insists that the issue comes down to "McCain's ability to reach across party lines, something Obama has no record of doing."

Unsurprisingly, in light of the migrant worker status quo, quite a few Latinos said they couldn't vote at all -- as many as three in four people I approached over several days. One man in cowboy boots declared, "I'll vote for Obama, so that he gives me papers," before lifting his young son into the back of a new-looking SUV.

McCain might be able to gain support from Latino small-business owners here, some of whom are wary of Obama's tax policies and of change in tough economic times. Small-business conservatism could also exert paternal influence on the many construction workers who take their political talking points from their boss. Jose, 46, said in blunt terms that his boss had instructed that "we shouldn't vote for 'el negrito' [Obama] because the country isn't ready for a change." "But," he added, smiling and scooping up his young daughter, "with Mr. Bush, the economy's headed down." He remains undecided about his vote.

For others, an end to the war in Iraq is a priority. Latino voters see the war as aggravating a troubled economy, and many have relatives serving overseas. Marta, 37, a homemaker, said she remains undecided, but is clear that she wants to see an end to the war. She is looking to the debates to gain insight into Obama's plan for Iraq.

Beyond the Reno area, the Obama campaign is hoping to reach out to Latino voters in rural northern Nevada, where it's a tougher sell. In Elko, a mining and ranching town of more than 18,000 that Obama has visited three times (twice in the primaries), Latino voters were hardly burning with electoral passion. Elia Pineda, 30, a cashier at La Unica, a Mexican restaurant, didn't know Obama had visited the prior week, and she didn't care; she had never voted and said she wasn't going to this election. Jose and Eva Alegria, an elderly couple in nearby Carlin, home to the largest gold mine in North America, had given up on voting several elections back.

Creating excitement around a Democratic candidate in rural northern Nevada, where Bush won upward of 80 percent of the vote in 2004, is difficult, said Debbie Stone, a Republican and executive director of the Chamber of Commerce in Winnemucca. "Northern rural Nevada is so Republican it's silly," she said with a laugh. Trying to find Latino voters who would discuss their thoughts on the election was an almost impossible task in the dusty, neon casino town of more than 7,100 people.

In Reno, visits to both the McCain campaign office (where I was shooed away for not clearing my visit through the proper channels) and the Obama campaign office revealed no Latino volunteers manning the phones, although in the Obama office one volunteer could be heard pleading to another potential volunteer, that "we very much need Spanish speakers."

On the whole, the Obama campaign says it is confident that by running on the economy in Nevada, and by registering and turning out thousands of new voters, that Latino supporters will help deliver the state. They point to thousands of newly registered Democrats since 2006, closing the advantage in registered Republicans in Washoe County from 16,500 in 2004 to 3,200 now.

The McCain campaign is skeptical on this. "Democrats love to tout voter registration numbers, but that's putting the cart before the horse," said McCain spokesman Gorka. "High taxes and big government doesn't fly in the West."

From the perspective of Herzik of University of Nevada-Reno, "If I'm a Republican looking at this bulge in Democratic registrations, I'd be real nervous." But the Latino vote has never materialized as much as anticipated, says Herzik. "It's always been called the sleeping giant, but it has yet to wake up. If I'm a Democrat, I'd be foolish to take this to the bank, given past performance."

But a secret weapon for the Democrats may be the legions of Bay Area liberals who have been making weekend migrations to Reno to canvass for Obama. Although the Obama campaign was cagey about the numbers, Alise Moss, 53, a healthcare consultant from Sparks, Nev., who has hosted several groups of California volunteers at her house, claimed that on a recent weekend the campaign had 400 volunteers show up. "We love those crazy Californians," said Moss with a laugh. "California's navy blue, and they don't mind coming over here and knocking on doors, and all those rejections."

If they can help get enough new Latino voters interested, they may help paint Nevada a rare shade of blue come Nov. 4.