The people in urgent need of long-term banishment

A right-wing Bush follower condemns liberals for exploiting crises "to expand the power of government at the expense of the individual."

With apologies and regrets to Ed "Captain Ed" Morrissey, whose well-deserved "Funniest Blog Post Ever" crown is being snatched away after such a tragically short period of time, this observation today, from National Review's Mark Levin, will be hard to top for many years to come, even by the most imaginative right-wing satirists:


The liberal uses crises, real or manufactured, to expand the power of government at the expense of the individual and private property. He has spent, in earnest, 70 years evading the Constitution's limits on governmental power. If conservatives don't stand up to this, who will? If they don't offer serious alternatives that address the current circumstances AND defend the founding principles, who will? 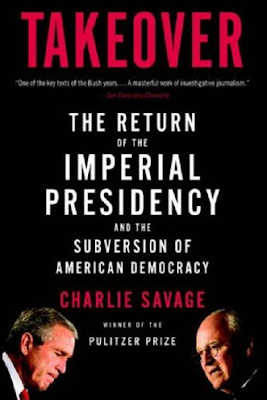 In 2006, I also wrote a deeply admiring book chronicling the Right's historic crusade in defense of core Constitutional liberties, as the American Left relentlessly sought during the Bush presidency to exploit the 9/11 attack, Saddam Hussein's mushroom clouds, the evil labs of Mrs. Anthrax and Dr. Germ (the Five of Hearts in the U.S. Government's deck of playing cards), Sinister Sleeper Cells lurking on every neighborhood playground, the revolving door of New Hitlers, and so many other crises -- real or imagined -- in order to expand federal government power at the expense of the individual.

If it weren't for the heroic resistance led by the small-government, Constitution-loving conservatives at National Review, Weekly Standard and right-wing talk radio -- cheered on by the freedom-loving, truth-seeking investigators of the right-wing blogosphere -- we'd probably be living in some sort of Lawless Surveillance State by now, complete with secret prisons, state-sanctioned torture, warrantless eavesdropping on U.S. citizens, process-less and indefinite imprisonments, a virtual abolition of Fourth Amendment guarantees, and other anti-constitutional nightmares too heinous even to contemplate. As the heroic freedom-fighter Mark Levin so memorably put it: "If conservatives don't stand up to this, who will?"

UPDATE: As El Cid notes in comments, the Right has become such a sewer of self-parody that they are destroying actual political satire -- speaking of which, here's the latest segment from history's longest (or at least most-milked) interview:

In order to learn the source of her political knowledge, Katie Couric asked her three times what specific newspapers she read prior to being selected as Vice President, and Palin -- after trying to answer a couple times with her trademark rambling incoherence ("all of 'em, any of 'em that have been in front of me all these years . . . a vast variety") -- abruptly decided that the question was an elitist, condescending East Coast media assault on Alaska and chided Couric accordingly, without answering. How could you mock that other than by repeating it verbatim?


* Governor, your candidacy has ignited extreme hostility, even some hatred on the left and in some parts of the media. Are you surprised? And what do you attribute this reaction to?

* Now Governor, the Gibson and the Couric interview struck many as sort of pop quizzes designed to embarrass you as opposed to interviews. Do you share that opinion?

* You're pro-life, and how much of the virulent opposition to you on the left do you attribute to your pro-life position, and maybe even to the birth of, your decision, your and Todd’s decision to have Trig?

I didn't make those up; that's really what he asked.


Left Creates a Crisis Mentality, Uses It to Abrogate Constitution

The GOP has controlled the House for all but 20 months of the last 14 years. They've controlled the White House for the last 8 years, and also had control of both houses of Congress for 4 of those years. It's amazing what "the Left" can accomplish by never being in power, and how "the Right" is powerless to stop it even as they control the levers of Government.