More blowback from the war on terror

The U.S.-backed Ethiopian military has secreted away scores of "suspects" -- including pregnant women and children -- and fueled anti-American rancor in Africa. 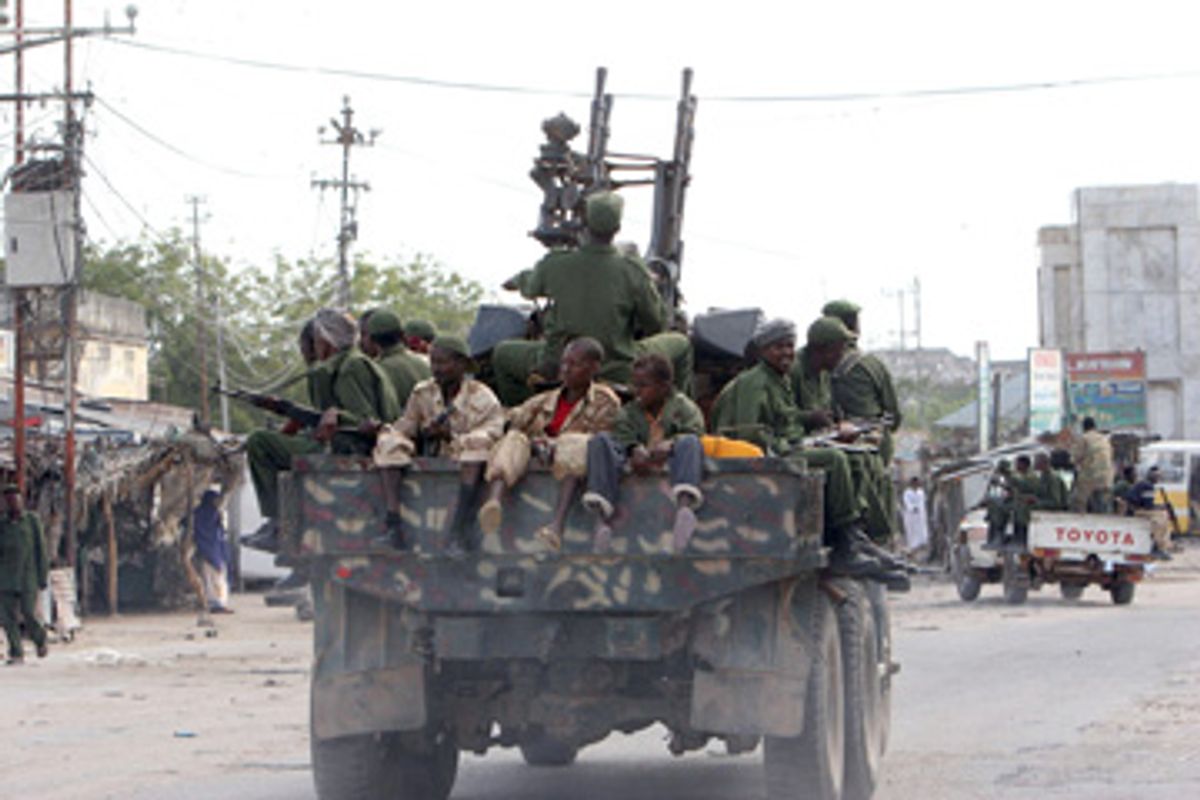 Ishmael, a 37-year-old shepherd from the Ogaden region in Ethiopia, looked at me with tears in his eyes. Ethiopian forces -- who had already killed his mother, father, brothers and sisters -- murdered his wife days after they were married. They then slaughtered his goats, beat him unconscious, and slashed his shoulder to the bone, he said.

In December 2006, Ishmael crossed through Somalia into Kenya, heading for the nearest refugee camp in search of medical care. But when he didn't have enough money to pay a 1,000 shilling ($15) bribe, the Kenyan police bundled him into a car and took him to Nairobi. Less than a month later, he was herded onto an airplane with some 30 others, flown to Somalia and handed over to the Ethiopian military -- the same forces that he previously fled.

Ishmael is a victim of a 2007 rendition program in the Horn of Africa, involving Ethiopia, Kenya, Somalia and the United States. There are at least 90 more victims like him. Most have since been sent home. A few -- including a Canadian and nine who assert Kenyan nationality -- remain in detention even now. The whereabouts of 22 others -- including several Somalis, Ethiopian Ogadenis, and Eritreans -- remain unknown.

In late 2006, the Bush administration backed a full-scale Ethiopian military offensive that ousted the Islamist authorities from Somalia's capital, Mogadishu. The fighting caused thousands of Somalis, including some who were suspected of terrorist links, to flee across the Kenya border.

Kenyan authorities arrested at least 150 men, women and children from more than 18 countries -- including the United States, the United Kingdom and Canada -- in operations near the Somali border, and held them for weeks without charge in Nairobi. In January and February 2007, the Kenyan government then unlawfully put dozens of these individuals -- with no notice to families, lawyers or the detainees themselves -- on flights to Somalia, where they were handed over to the Ethiopian military. Ethiopian forces also arrested an unknown number of people in Somalia.

Those rendered were later transported to detention centers in the Ethiopian capital Addis Ababa and other parts of Ethiopia, where they effectively disappeared. Denied access to their embassies, their families and international humanitarian organizations such as the International Committee of the Red Cross, the detainees were even denied phone calls home. Several detainees have said that they were housed in solitary cells, some as small as two meters by two meters, with their hands cuffed in painful positions behind their backs and their feet bound together any time they were in their cells.

An unknown number of them -- likely dozens -- were questioned by the Central Intelligence Agency and Federal Bureau of Investigation agents in Addis Ababa. From February to May 2007, Ethiopian security officers daily transported detainees -- including several pregnant women -- to a villa where U.S. officials interrogated them about suspected terrorist links. At night the Ethiopian officers returned the detainees to their cells.

For the most part, detainees were sent home soon after their interrogation by U.S. agents ended. Of those known to have been interrogated by U.S. officials, just eight Kenyans remain. (A ninth Kenyan in Addis Ababa was rendered to Ethiopia in August 2007, after U.S. interrogations reportedly stopped.) These men, who have not been subjected to any interrogation since May 2007, would likely have been repatriated long ago but for the Kenyan government’s longstanding refusal to acknowledge their claims to Kenyan citizenship or to take steps to secure their release.

Recently I spoke by telephone to several of the still-detained Kenyans. They described water-soaked mattresses, insufficient food and inadequate healthcare. Two said they have trouble walking, following beatings by Ethiopian officials, and a third said he can no longer use his left hand.

“I can’t sleep here. I miss my family. Please, I need you to help us to go home,” one detainee pleaded with me.

In mid-August 2008, Kenyan authorities visited these men for the first time. The officials reportedly told the detainees they would be home within a few weeks. But more than a month and a half has passed with no apparent follow-up.

In addition to working with the U.S., the Ethiopians used the rendition program for their own ends. For years, the Ethiopian military has been trying to quell domestic Ogadeni and Oromo insurgencies that receive support from neighboring countries, such as Ethiopia's archrival, Eritrea. The multinational rendition program provided them a convenient means to continue this internal battle -- and get their hands, with U.S. and Kenyan support, on those with suspected insurgent links.

Ishmael was one of their victims.

The questions his Ethiopian interrogators asked were nonstop, and always the same: "Are you al-Qaida? Are you an Ogadeni rebel? Are you part of the Somali insurgency?" Each time he said no, he was beaten, sometimes to the point of unconsciousness. When he resisted answering, they targeted his testicles.

Then, in February 2008 -- some 14 months after his original arrest -- the Ethiopians decided Ishmael was no longer worth the trouble. They dumped him, along with 27 others, just over the Somali border. The men were met by a Somali officer who told him that he was very sorry, that their arrest was a mistake and that they were all innocent.

Now Ishmael is back in the refugee camp, limping and urinating blood. He is still waiting for the healthcare he came searching for nearly two years ago.

Almost everyone I spoke with assumed -- whether true or not -- that the United States backed the arbitrary arrest and unlawful rendition of men like Ishmael and the still-detained Kenyans. Almost everyone assumed that the Ethiopians operate with America's blessing. Their stories have circulated, fueling anger and resentment. As one man, whose childhood friend became one of the rendition victims, told me, "Now when I go to the mosque, I pray to God to punish the Americans."

To be sure, the United States is not the main culprit when the Kenyans unlawfully render suspects or the Ethiopians torture them. But when U.S. officials interrogate rendition victims who are being held incommunicado, the United States becomes complicit in the abuse. The U.S. is funding the Ethiopian military, supporting its activities in Somalia and training Kenyan security forces in counterterrorism -- so as U.S.-backed military and police forces in the region brutalize their domestic opponents in the name of fighting terrorism, the United States is often blamed.

The United States could change those perceptions by demanding higher standards of its foreign partners and cutting off aid to abusers. It otherwise risks fueling the very problem -- anti-American militancy -- that it seeks to solve. For starters, the U.S. could demand the release or fair trial of any rendition victims still stuck in Ethiopian custody.

At the end of our interview, Ishmael looked at me with sad eyes. "I have suffered three times," he told me. "I lost my family; I was beaten and tortured, and then I was arrested and tortured again. Now I have nothing to lose."