The voters are angry -- and don't know why

What happens when the messy thing called democracy collides with the financial markets in full panic. 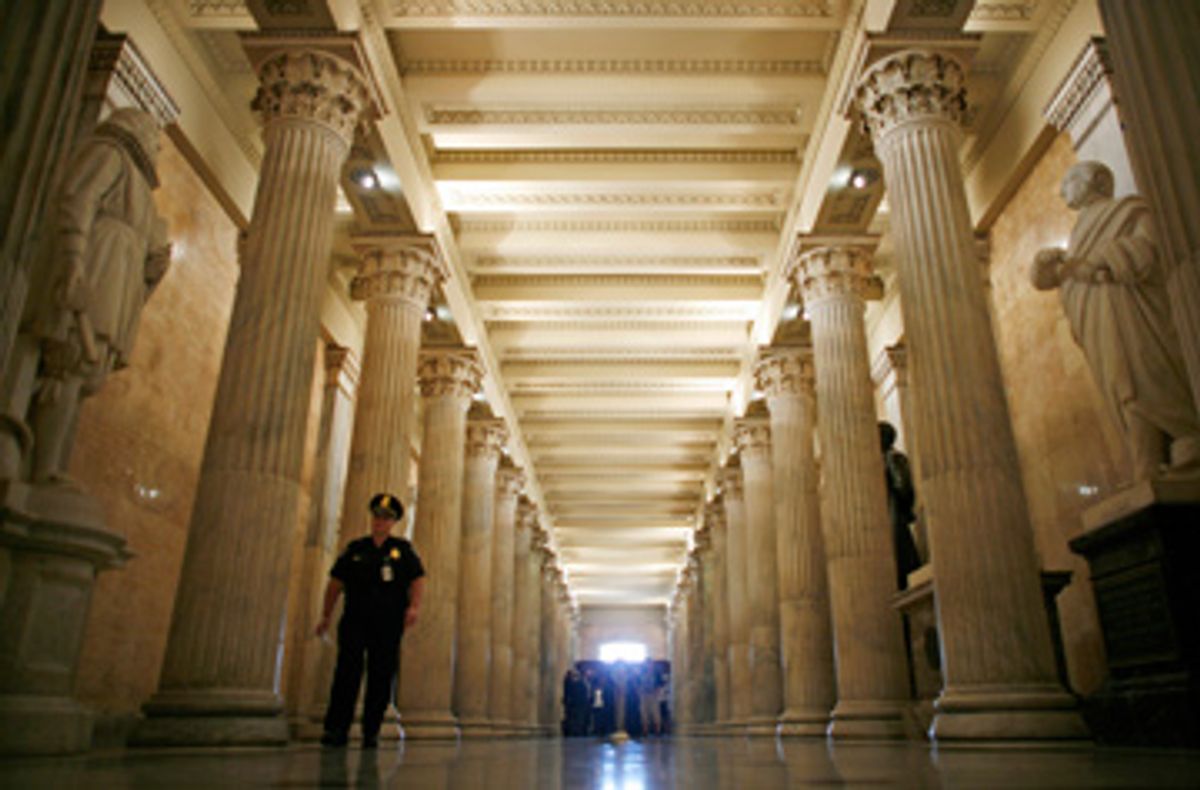 "Congressional inaction has put every American and the entire economy at the gravest risk.''

"Continued inaction in the face of the gathering storm in our financial markets would be catastrophic for our economy and our families."

Money talks -- or moans, in the case of most stock portfolios this week. That is why the most revealing responses to the market mayhem are not what the two presidential candidates say, but what their campaigns pay to put on television.

The morning after the 778-point market mayhem, three TV ads were released with public fanfare, two by the candidates themselves and the third by the Republican National Committee blasting Obama. It was stunning how unresponsive all three commercials were to the real-world details of the worst financial crisis since brokers drank their martinis in speak-easies. Both campaigns seem determined to cling to their familiar arguments (Obama is too liberal and McCain is an out-of-touch Bush III) in the face of the dramatically reshaped realities on Wall Street.

Yes, there was taffy-pull fact-stretching in both the McCain and RNC spots. McCain's own commercial tried to blame Obama and the Democrats exclusively for the collapse of Fannie Mae and Freddy Mac -- without ever deigning to mention that his own campaign manager, Rick Davis, was paid nearly $2 million to help shield the loan giants from stricter regulation. At least, the McCain ad had something -- however factually questionable -- to do with Wall Street. The Republican Party ad went after Obama as a (yawn!) liberal big-spender who will purportedly cost the taxpayers $1 trillion, not counting the bailout.

Speaking to the camera for two minutes, Obama had more than enough time in his own commercial to add unaccustomed heft to the standard 30-second sound bites of the campaign's living-room wars. Obama, to his credit, made serious arguments. But they were about tax cuts, which have about as much connection to the Wall Street crisis as McCain's Ahab-like obsession with congressional earmarks. Obama's claim that "my plan offers three times as much tax relief to the middle class as Sen. McCain's" provides little balm when the stock market lost more than $1 trillion Monday (admittedly, it regained about two-thirds of that money in a Tuesday rally).

What are the roots of this bipartisan politics of irrelevancy? Both campaigns are basing their TV ads on non sequiturs, presumably because they believe that most voters cannot handle a serious discussion of the liquidity crisis on Wall Street.

Sadly, this cynicism may be justified. A Pew Research Center poll released Wednesday found that 43 percent of all voters admitted that they feel "confused" by the proposed plan to stabilize the financial markets. At the same time, voters grasp that something important is happening -- 54 percent say, in response to another question, that they are paying "a lot" of attention to the bailout debate in Washington. Pollster Andy Kohut, the director of the Pew Research Center, said that it was virtually "unparalleled" to have this simultaneous level of interest and confusion in a policy debate. "It's a tough one to get into the nitty-gritty of," said Kohut. "It is not like gay marriage that is easy to grasp no matter what your point of view is."

This more than anything may explain the incoherence of Monday's House vote rejecting the bailout plan as 133 Republicans, mostly from the right, and 95 Democrats, mostly from the left, joined in a populist revolt against the bipartisan establishment's best effort to staunch the bleeding in the financial markets. Yes, the bailout plan was badly explained (it would presumably cost significantly less in the long run than its advertised $700 billion price tag) and was rushed to the House floor with self-defeating haste. But in voting it down, the House was most of all proving yet again that it is the most representative branch of government. If 43 percent of the voters say they are confused (not to mention the ones who are ashamed to admit it), it should be no surprise that a House majority shares their bafflement.

No one -- not even Sarah Palin -- is claiming that the incredible shrinking stock portfolios are God's will. But it is fair to note that the Jewish New Year comes at a particularly inconvenient time for resolving the congressional impasse. The earliest that the Congress will reconvene is noon on Thursday -- and even then arcane congressional rules prevent the House leadership from immediately considering a revised bailout bill unless (ha!) there is unanimous consent. So, at minimum, two more days of white-knuckle stock trading are on the horizon before the House can attempt to salvage its own rescue plan.

While congressional strategies can change faster than a 17-year-old can text message, the shell-shocked House Democratic leaders are currently torn between two gambits as they grope toward a majority. One notion is to depend on "buyer's remorse" among Republicans and some wavering Democrats who belatedly discovered Monday that the pension funds and 401Ks on Main Street tend to evaporate along with Wall Street. The other option is to add inducements to the bills for liberals (extended unemployment insurance, increases in food stamps, maybe middle-class tax cuts) in an effort to add to the 140 Democratic votes for passage. But there are two risks for the House leadership to this tilt-left strategy: They could lose more Republican votes than they would gain, and the Senate (which needs 60 votes to shut off a filibuster) might balk at the revised legislation.

For all the talk of leadership in Washington (and out on the campaign trail with Obama and McCain), the nation is locked into politics dictated by the Dow Jones average. If the markets remain upbeat or, at least, calm, Wednesday and Thursday, Congress will presumably interpret this financial respite as an invitation to dither. But a further collapse on Wall Street may give rise to renewed cries that the bailout is too little, too late or, conversely, too lavish. In short, this is what happens when that messy thing called democracy collides with the fearsome force of the financial markets in full panic.