The candidate draws a big crowd -- at least from his own party -- for a floor speech supporting the Wall Street bailout plan. 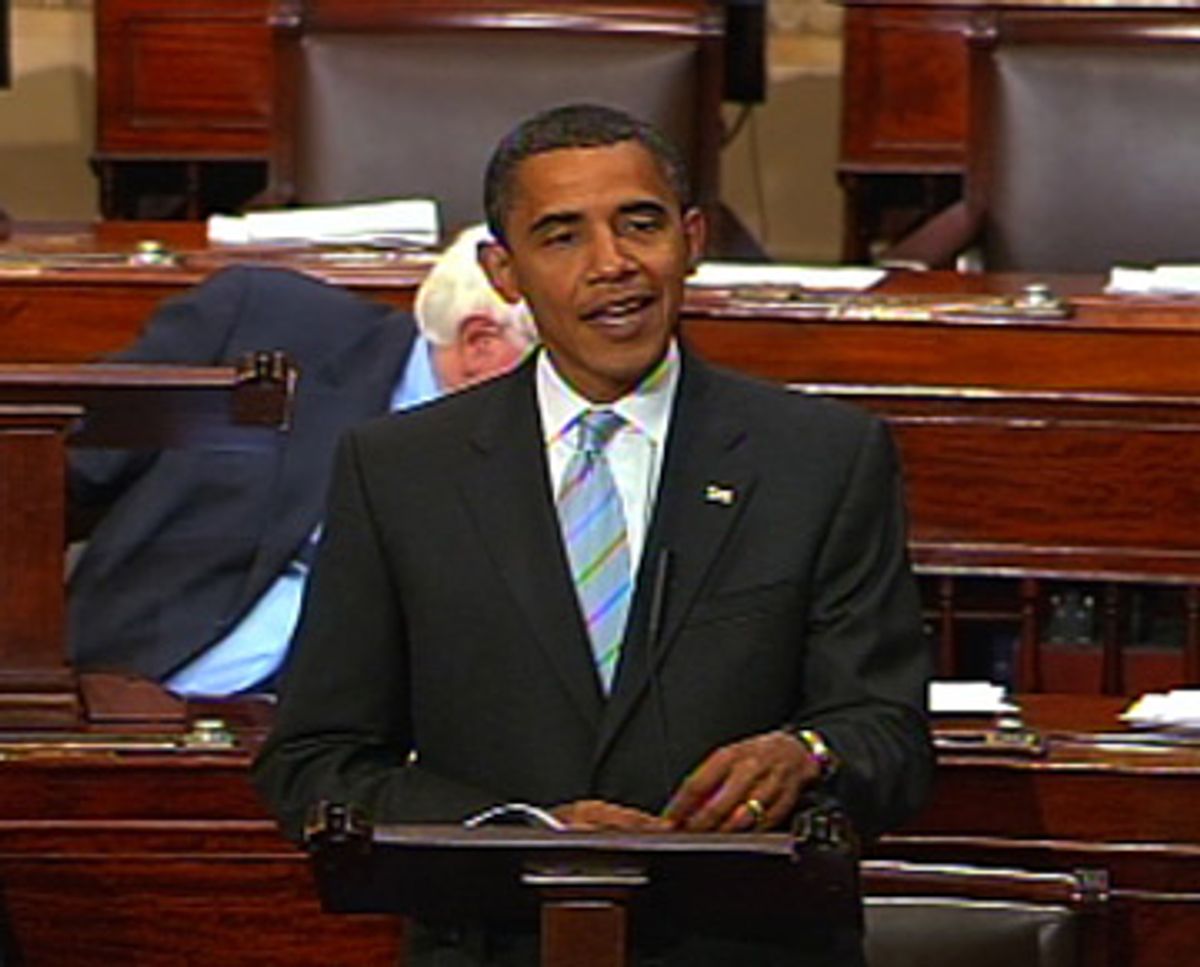 WASHINGTON -- A young up-and-coming senator from Illinois just spoke to a fairly packed Senate chamber, holding lawmakers, staff and the spectators alike enthralled. This guy gives a pretty good speech; he might have a future in national politics. Keep an eye on him -- his name is Barry something?

It would be hard for Barack Obama to have asked for a much more enthusiastic homecoming to the Senate than he got today -- at least from his Democratic colleagues, who flocked to the floor to hear his speech on the Wall Street bailout. Florida's Bill Nelson sat watching Obama with a rapturous grin on his face. High-school-age pages sat on the steps of the Senate lectern, far closer to Obama than the Secret Service would ever usually let anyone who hasn't been patted down, background-checked and watched closely at all times by heavily armed agents. He was swarmed after he finished talking; Vermont's Bernie Sanders gave him a hug, and they seemed to be talking about Brooklyn. (It sounded, from the press gallery, like Sanders at one point said to Obama, "Hey, I'm from Flatbush.")

When Obama ran over his allotted time, he made the standard request, using Senate rules, to ask "unanimous consent" for a few more minutes. Connecticut Sen. Chris Dodd jumped to the mike. "I'd ask consent that he have as much time as he'd like," Dodd said, as the parliamentary procedure nerds in the chamber (read: the lawmakers, the staff and the press corps) laughed at what passed for a witty way of phrasing the request.

Republicans were a little less enthusiastic. Or you can assume they were -- most of them weren't in the Senate chamber to hear Obama speak. Pete Domenici of New Mexico toddled out the back door midspeech. Jim DeMint, a far-right conservative from South Carolina who spoke immediately after Obama finished, sat watching from across the floor, and Alabama's Jeff Sessions wandered in at one point, but otherwise the GOP caucus seemed to be deliberately staying away.

Much of Obama's speech was more or less identical to what he has been saying on the campaign trail for the past week or so. "Understandably, people are frustrated, and they're angry that Wall Street's mistakes have put their tax dollars at risk," he said. "And they should be. I'm frustrated and angry, too. But while there's plenty of blame to go around -- and many in Washington and Wall Street who deserve it -- all of us -- all of us have a responsibility to solve this crisis, because it affects the financial well-being of every single American."

Listening to him, it actually seemed like Obama probably should have come out forcefully for the bailout package earlier, if he actually wanted it to pass; he gave a much more cogent, direct explanation for why supporters think it's necessary than anything Hank Paulson has said in the last few weeks. "If we don't act, it will be harder for Americans to get a mortgage for their home or loans they need to buy a car or send their children to college," Obama said. "What it means is that businesses won't be able to get the loans they need to open a new factory or make payroll for their workers. And if they can't make payroll on Friday, then workers are laid off on Monday. And if workers are laid off on Monday, then they can't pay their bills or pay back their loans to somebody else. And it will go on and on and on, rippling through the entire economy."

At any rate, the bill isn't expected to need Obama's help (or John McCain's) to pass the Senate. Leaders from both parties told reporters this afternoon they thought it probably had the votes they needed to send it along to the House.