A nation of conspiracy theorists can't be wrong

From miracle diets to creationism to rumors about the origins of 9/11, a new book traces our irrational love of misinformation. 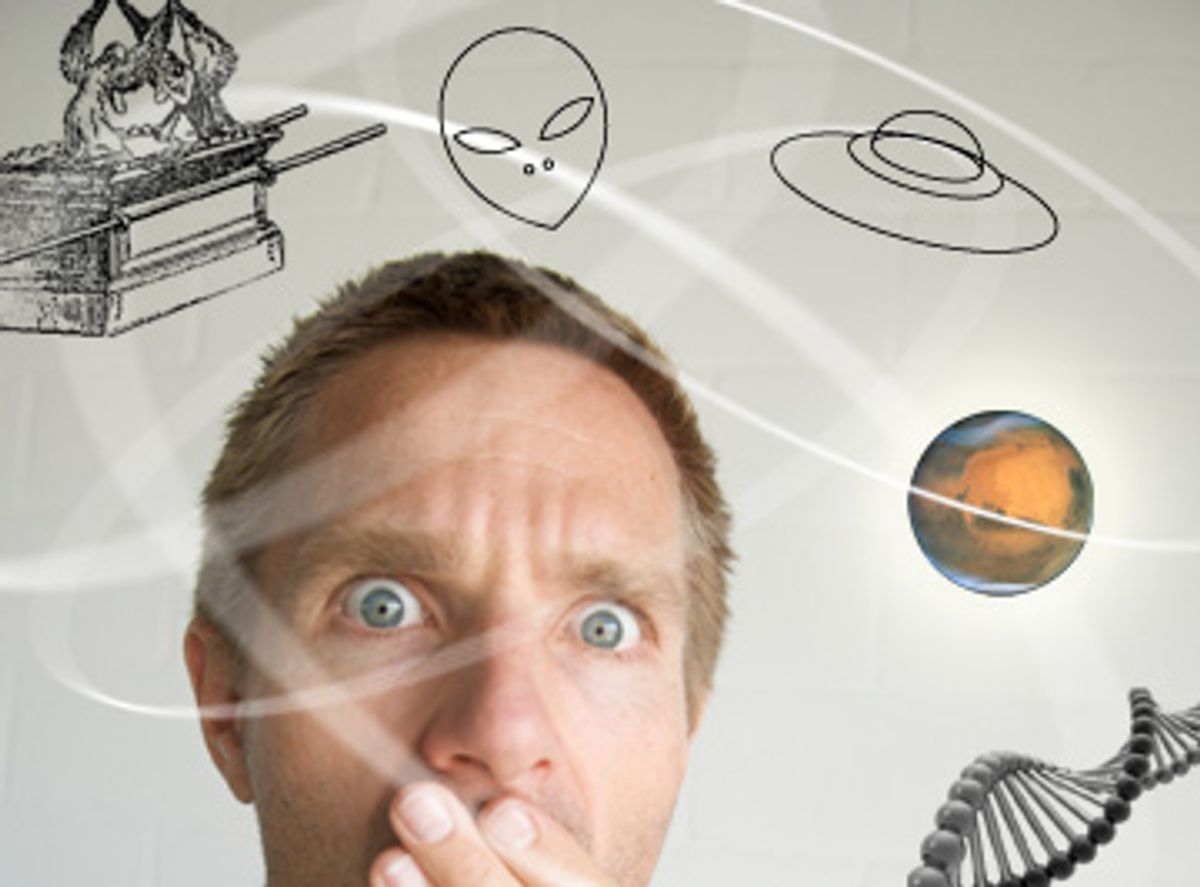 The U.S. government blew up the twin towers. The AIDS virus was engineered by scientists to kill African-Americans. Chinese explorers landed on American shores in 1421. Crystals will heal you. Aliens landed at Roswell. The Priory of Sion is protecting the secrets of the Messianic bloodline. Barack Obama is a Muslim.

If you believe any of those propositions, you are ... well, let's tack toward charity. You have been swept along in a tide that the British polemicist Damian Thompson likes to call "Counterknowledge." Moreover, you are legion. Millions of unwary souls from every quadrant of Earth are swallowing a daily diet of quackery, conspiracy theory, bogus history and faux science. We haven't just turned off our bullshit detectors, we've permanently disabled them. And in so doing, Thompson argues, we've made for ourselves "a thrilling universe in which Atlantis is buried underneath the Antarctic, the Ark of the Covenant is hidden in Ethiopia, aliens have manipulated our DNA, and there was once a civilization on Mars."

Thrilling but, of course, wrong. Demonstrably wrong in most cases. And yet we're ready to buy in, aren't we? Dear God, what won't we buy into? UFOs, miracle diets, astrology, Bible prophesy. Satanic ritual abuse, recovered memory. Aromatherapy, reflexology, craniosacral therapy. What ties together all these ancient and not-so-ancient belief systems is, by Thompson's reckoning, simply this: They all purport to be knowledge without actually being knowledge. They are "misinformation packaged as fact."

And packaged all too well. "Ideas that, in their original, raw form, flourished only on the fringes of society are now being taken seriously by educated people in the West, and are circulating with bewildering speed in the developing world." The result, he says, is "a pandemic of credulous thinking ... a huge surge in the popularity of propositions that fail basic empirical tests." How wide a pandemic, you might ask? How great a surge? Thompson is a stickler for facts but -- ironically enough, given the nature of his enterprise -- he's not so keen on hard numbers. And the ones he provides don't necessarily back him up. A 2004 Gallup poll found that 45 percent of Americans "believe that God created human beings in their present form about 10,000 years ago." (In anatomical terms, modern humans date back at least 100,000 years.) But that finding is virtually unchanged from the 44 percent figure in a 1982 poll. We may not have progressed on this subject, but at least we haven't gotten significantly dumber.

Thompson is far more effective at charting how counterknowledge has morphed under modern conditions. As the Internet tears down traditional news portals, untested propositions go hurtling through cyberspace, vastly increasing the ability of bad information to take root -- that is, to look simply like new information. "A rumor about the Antichrist can leap from Goths in Sweden to an extreme traditionalist Catholic sect in Australia in a matter of seconds," writes Thompson. As for creationism, it is now less a religious phenomenon than a technological one. Sites like CreationWiki and Conservapedia and Kids 4 Truth (a primer in intelligent design) dress up their unsecular ideas in secular clothing -- and obliterate the difference between fact and faith more effectively than Sarah Palin ever could.

But why harp on American fundamentalists when, as Thompson points out, irrationality is just as deeply entrenched in the Islamic world, if not more so? A 2006 poll of higher-education students in the United Kingdom found that fewer than 10 percent of Muslims accept evolution. Among the populaces of Indonesia, Pakistan and Egypt, that percentage drops to 2, 5 and 3 percent, respectively. Turkey is now overtaking the United States as the wellspring of creationist agitprop.

No surprise that, in the Internet's strange-bedfellows world, Christians are now sharing intelligent design curricula with Muslims, just as some creationists are overlapping with Holocaust deniers. The same readers who swallow hogwash about freemasonry and the Great Flood and the Priory of Sion are the first in line to buy books like "The Jesus Papers" and "Fingerprints of the Gods." "If you believe one wrong or strange thing," writes Thompson, "you are more likely to believe another." Especially if you're seething with hostility toward political, intellectual and scientific elites. Counterknowledge, for all its transience, gives its owners an enduring feeling: They have been entrusted with the very secret they weren't supposed to know.

It's a contagious feeling. Thanks to "The Da Vinci Code," 40 percent of Americans now believe that churches are concealing "the truth" about Jesus. Tens of millions have seen "Loose Change," the "documentary" that charges the Bush administration with single-handedly carrying out the 9/11 attacks, right down to elaborately faked cellphone calls from Flight 93. And in today's bazaar of craziness, conspiracy theory is far from being the only booth. The best-selling book and DVD package titled "The Secret" exhorts us to reap untold riches through the simple troika of asking, believing and receiving. (As best I can tell, it's virtually identical to professor Harold Hill's "think system" in "The Music Man.")

Damian Thompson is a feisty and sure-footed debater, and he has great fun with the bogus archaeologists who want to turn the Americas "into the Grand Central Station of the ancient world, visited by Greeks, Romans, Celts, Phoenicians, Israelites, Nubians and 'Hindoos.'" He is equally withering on "The Holy Blood and the Holy Grail" and its pseudo-historic cronies: "Open a page at random, and there is a good chance you will find a passage that reads: 'We could not believe what we had in our hands. If these documents were what they said they were, then the whole history of [insert as appropriate] would have to be rewritten,' etc."

But what becomes clear as one reads through "Counterknowledge" is how much our sense of true or false is conditioned by our belief systems. Thompson, for his part, believes alternative medicine is "'alternative' for a good reason: it doesn't work." And yet there are many who would contend it does. Insurers, who have as good reason as any to be skeptical, have begun to cover practices like chiropractic and acupuncture, which Thompson would consign to the bin of mumbo jumbo.

The author's biases come most clearly to the surface when he tries to allot blame for counterknowledge's diffusion. One finger is pointed at left-wing multiculturalists who have transformed orthodox science into "a language game played by a white elite." Another is pointed at craven academic institutions for giving practices like homeopathy the imprimatur of science. Still another is pointed at profit-obsessed publishers who spend so much time promoting and so little time fact-checking fraudulent texts like "1421: The Year China Discovered the World."

But one could argue that "1421" is a model of historic rigor alongside, say, the Bible or the Quran. And where Thompson treads rather delicately -- and where he temporarily parts company with atheist fellow-travelers like Richard Dawkins and Daniel Dennett -- is on the subject of religion. Perhaps because his day job is helming Britain's leading Catholic newspaper, the Catholic Herald, Thompson seems far less eager to attack irrationality when it takes place around an altar. "Religion," he argues, "becomes proper counterknowledge only when it seriously seeks to undermine, or is contradicted by, the evidence of our senses. There is no reason to believe that the historical miracles claimed by any faith actually happened; but common sense tells us that there is a practical difference between declaring one's belief in isolated supernatural events such as the Resurrection, which is what ordinary churchgoers do, and making falsifiable statements about the world around us, which is what faith healers do."

One could further argue that orthodox religion functions as a training ground for counterknowledge, both by transforming the irrational into evidence of a higher rationality and by persuading followers that they are uniquely able to make sense of the world. If we can build a private channel to God, we can surely build a private channel to knowledge.

In other words, Thompson needs to think a little more about what constitutes knowledge. I myself am a die-hard evolutionist who loathes creationism in whatever form it takes. But how do I know evolution to be true? I know it because generations of the world's greatest scientists have subjected Darwin's theory to the most rigorous possible scrutiny. But have I reviewed their work? Do I have the time or capacity to do so? No, I accept the scientific community's word for it, and this is in itself a kind of faith. A faith grounded, yes, in verifiable and empirical and replicable studies. A vastly superior faith, I would argue, to knowledge-averse creationism, but a faith nonetheless.

And sometimes even faith in science can be misplaced. Science can get it wrong. Science can't always get the job done. (According to GlaxoSmithKline, 90 percent of new drugs produce benefits in only 30 to 50 percent of patients.) And sometimes science doesn't know. Counterknowledge thrives not just in opposition to knowledge but in knowledge's absence. Which makes it a more existential and perhaps less eradicable condition than Damian Thompson would wish. Given the choice between, on one side, not knowing and, on the other, knowing the wrong thing, I like to think I'd always choose the former. But maybe, in my darkest moments, I wouldn't. Maybe, in need of an answer, I'd take one wherever I could find it.