She was outmatched by Katie Couric, but how will Sarah Palin fare against Joe Biden? The debate comes at a crucial time for the struggling McCain campaign. 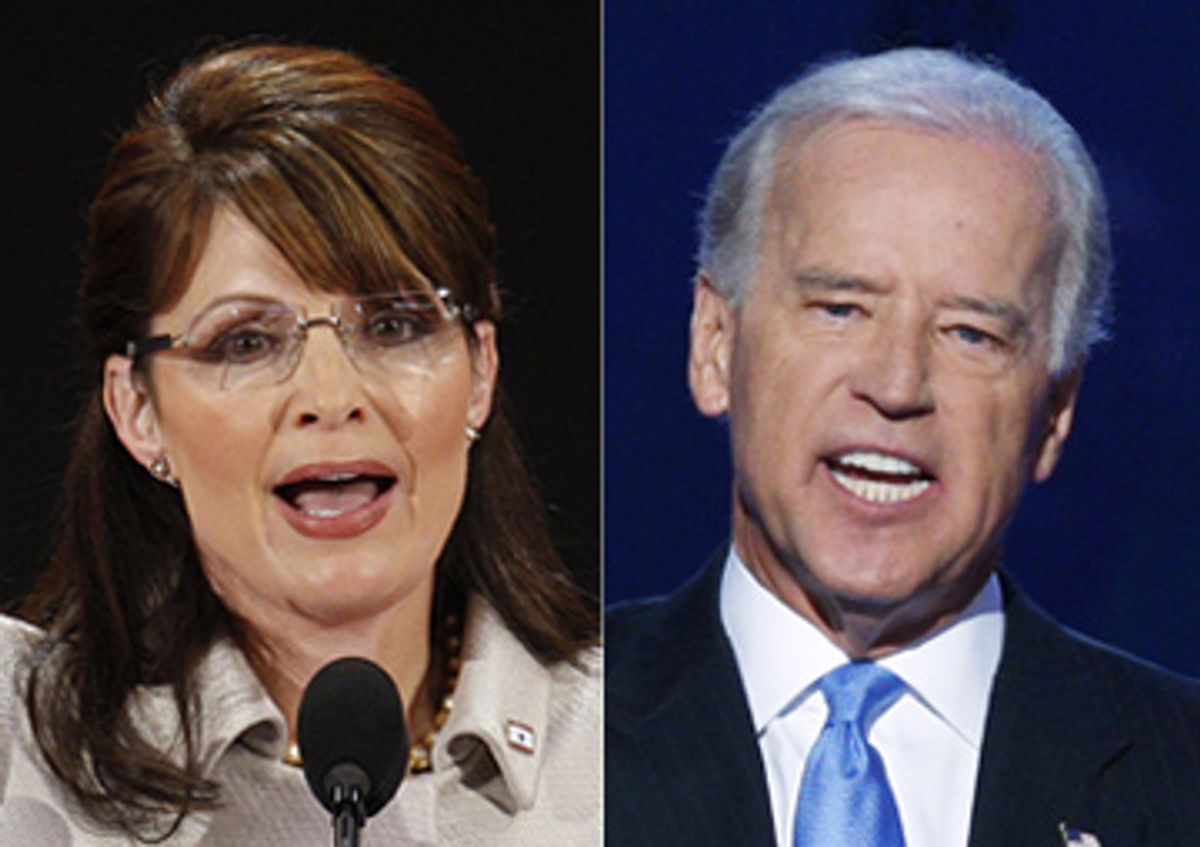 In the midst of the Iran-contra scandal, the late Phil Hartman did a dazzling "Saturday Night Live" Ronald Reagan impersonation in which the affable president turns into an intellectual giant (speaking flawless Persian, doing complex mathematical calculations in his head) as soon as the door of the Oval Office closes.

Sarah Palin will have her own opportunity to play against type Thursday night during her meet-me-in-St.Louis rendezvous with Joe Biden. Perhaps the first-term Alaska governor -- who seemed so over-matched during her TV interviews with Katie Couric -- will suddenly drop the name of the hard-line president of Uzbekistan (Islam Karimov) and speak with statistical precision about the peculiar "doughnut-hole" benefit formula of Medicare Part D (the prescription-drug program). But while Biden has his own history of making remarks that do not play well in YouTube videos, the chairman of the Senate Foreign Relations Committee may be perceived as a mere bystander during Palin's biggest career performance without a teleprompter.

The St. Louis debate comes at a perilous time for Palin and John McCain. The battered financial markets and McCain's own erratic performance on the Wall Street bailout have produced poll numbers that make Democratic insiders feel uncharacteristically giddy. Quinnipiac University released surveys Wednesday putting Barack Obama above the 50 percent mark in the three largest swing states -- Florida, Pennsylvania and Ohio. Meanwhile, a new national poll by the Pew Research Center suggested that Palin's deer-in-the-headlights TV interviews have eroded her standing among all voters except GOP partisans. A 51 percent majority in the Pew survey answered a ringing "no" to the question: "Is Sarah Palin qualified to serve as president?"

Despite the month-long Palin pandemonium, Thursday night's debate (even if it attracts a record television audience) is still the undercard for the two remaining Obama-McCain matchups. "Thursday night is a sideshow, it doesn't matter one bit," said Democratic pollster Paul Maslin, who is not working for the Obama campaign. "The debate is going to have no effect on the Nov. 4 result." As Maslin sees it (and his view is shared by Republicans speaking off-the-record), the contours of the race have been permanently altered by the market meltdown. "Two weeks ago, we were arguing over lipstick on a pig," said Maslin. "Now our economic situation has collapsed."

Vice-presidential debates have been odd-duck affairs since Bob Dole and Walter Mondale faced off in Houston between the second and third 1976 Jerry Ford-Jimmy Carter debates. That was the debate when Dole, who had joked his way through his prep sessions, ad-libbed an attack on "Democrat wars" like World War I and World War II. For all the public outcry over the bitterness of Dole, who had been severely wounded in Italy in 1945, this intemperate debate crack did not halt Ford's dramatic closing drive that almost renewed his lease on the Oval Office. In similar fashion, no debate one-liner was more withering than Lloyd Bentsen's 1988 put-down of Dan Quayle: "I knew Jack Kennedy. Jack Kennedy was a friend of mine. Senator, you're no Jack Kennedy." But Bentsen's veep leap did not prevent the Bush-Quayle ticket from carrying 40 states with 426 electoral votes.

It is almost inevitable that the Palin-Biden debate will be treated like a shootout at the gender gap. Merrie Spaeth, a Dallas-based commendations strategist who helped George H.W. Bush prepare for his 1984 vice-presidential debate with Geraldine Ferraro, recalled, "Vice President Bush was used to treating women, including me, in a deferential way. And it is hard to change the habits of a lifetime. I wonder if Sen. Biden, after more than 30 years in the Senate, will have the same kind of problem." The difference, beyond the changing attitudes of a quarter-century, is that Biden has debated women before -- both his 1992 Senate opponent (Jane Brady) and a presidential rival named Hillary Clinton during the run-up to the 2008 primaries.

Even though Democrats assume that Palin has been prepped to claim at some point in the debate that Biden is being patronizing and maybe even "sexist," the atmospherics in St. Louis may make this difficult to pull off. The difference is that the moderator (who was agreed to by both campaigns in advance of the vice-presidential picks) is Gwen Ifill. As Mandy Grunwald, who is Hillary Clinton's longtime media advisor, puts it, "It is fascinating from a gender point of view that the most devastating Palin interview was done by Katie Couric, a woman. With Gwen as the moderator, it will be much harder for Palin to claim that the guys are ganging up on her."

For his part, Biden knows that he has to avoid being arrogant about his hard-won knowledge of world affairs without reducing everything about foreign policy to the level of "Dr. Seuss Does Geopolitics." Of course, Biden faces a bit of a disadvantage, since his home state of Delaware does not share a common maritime border with Russia. Biden is also aware that the vice presidency is not an independently elected office -- and his primary debate role is to help Obama buttress his case against McCain. That is why Biden is apt to treat Palin gently as he wages a proxy war against the GOP presidential nominee.

As Palin and Biden take their places behind their dueling lecterns on Thursday night, it is worth remembering that this is the debate almost guaranteed to raise the ire of both Democratic and Republican partisans alike. Democrats are primed to see in every Palin answer evidence that she is ill-equipped for a stage larger than the Wasilla town hall. And Republicans will see in every Biden response contempt for the moose-hunting values that made America great. The sound and fury are sure to be savored by viewers of all stripes, but great TV moments (especially among the political second bananas) rarely decide elections.