Julianne Moore shines, others stumble through this extended metaphor on the condition of humanity. 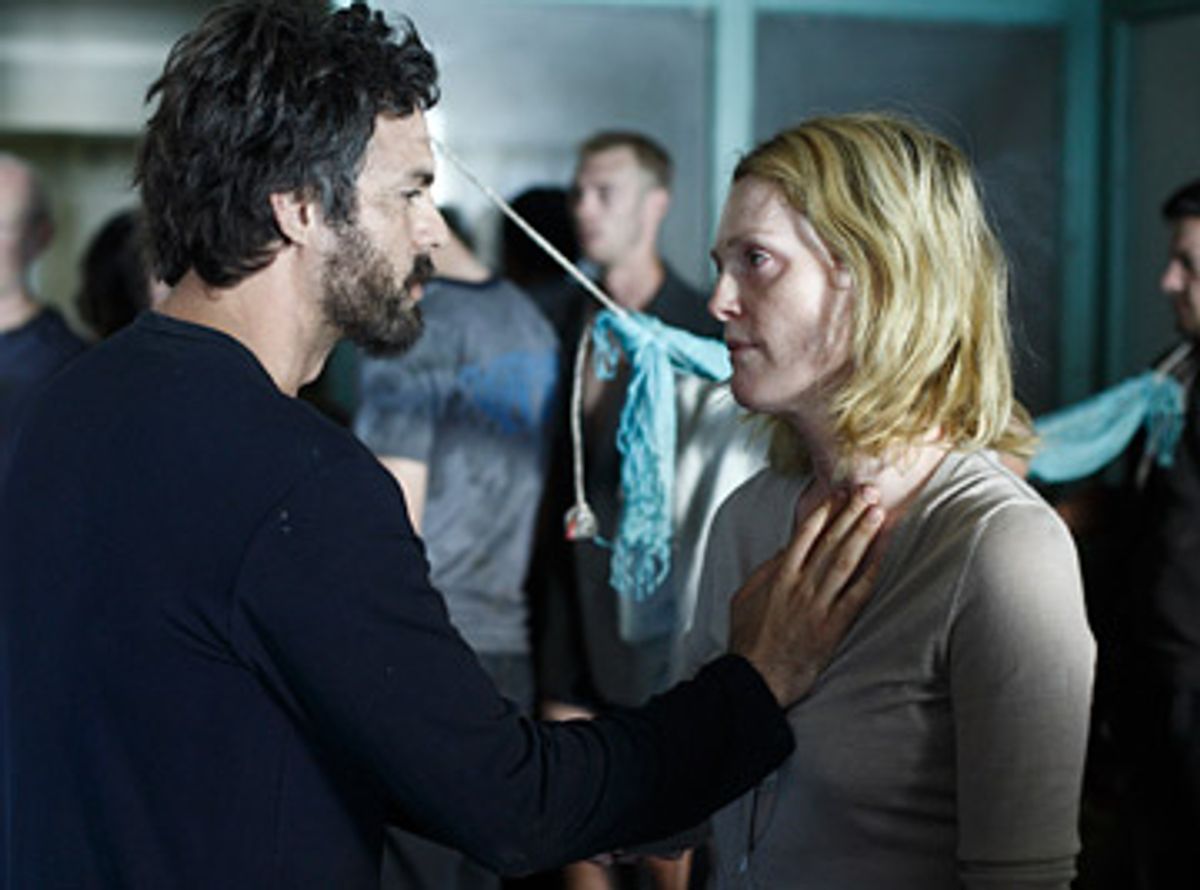 Fernando Meirelles' "Blindness" -- based on the novel by Nobel Prize winner José Saramago -- is an extended metaphor for the condition of man, and boy is it extended. In the course of two hours that crawl by like four and a half, Meirelles and his valiant but floundering cast stage a morality play whose message is thus: We've become so disconnected from ourselves as human beings that we can't even see one another. Faced with hardship and illness -- in this case, a plague that causes its victims to go blind within minutes -- humans aren't likely to band together; instead, they turn against one another, their worst instincts coming to the fore. Only when they accept that cooperation, kindness and a sense of community make life worth living do they regain a chance of "seeing" again, which is a good thing, because at least it stops them from bumbling around and declaring, "I'm blind!" and "I can't see!"

As we used to say on the playground: No shit, Sherlock. There's nothing daring, revelatory or dramatically compelling about "Blindness"; it's all conceit, with no core. It feels like an exercise conceived and executed by a junior-high drama class -- you can almost see the whole thing being scratched out on a blackboard, beginning with the words "The location: Any City in the World. The time: The Near Future." There's no way this can turn out well.

It all begins when a good-looking Asian guy (he's played by Yusuke Iseya -- none of the characters in "Blindness" have names, only handy signifiers like "The First Blind Man" and "The Man With the Black Eyepatch") suddenly realizes he can't see. "I can't see!" he cries, helpfully. An alleged good Samaritan helps him get home -- only the guy is really a thief. (He's played by Don McKellar, who also adapted the screenplay; is there any way I can get back the two hours he stole from me?) Before long, we learn that others are going blind as well. The epidemic also strikes a young boy (Mitchell Nye), a hooker with a heart of silver, if not gold (Alice Braga), and a bartender who's just not a very nice guy at all (Gael Garcia Bernal). It also eventually hits the eye doctor (Mark Ruffalo) who treats some of these people. The only person it doesn't hit is the doctor's unselfish, fluttery wife (Julianne Moore), who, as the Last Seeing Person in the Universe, becomes the caretaker of this godforsaken, sightless crew when they're thrown into quarantine by the government, forced to live in quarters that quickly become filthy and cramped. She helps them deal with the ever-escalating poo problem; she hooks up a clothesline contraption so they can find their way around without stumbling too much.

Despite these cheery improvements, life in the quarantine wards brings out the worst in many of the plague victims. It also causes an epidemic of overacting: With one astonishing exception -- and maybe you can already guess who it is -- no one gets out of "Blindness" without chewing his or her way out. (Ruffalo, in particular, doesn't just look blind; he looks perpetually lost.)

Mereilles has been building a career as a maker of "serious" pictures, first with his breakthrough movie, "City of God," a heavy-handed drama about poverty and crime among youth in Rio de Janeiro, and later with "The Constant Gardener," a reasonably well-crafted political thriller with heavy-duty moral underpinnings (and some good performances, particularly by Rachel Weisz). But in "Blindness" Meirelles hammers his points so hard, the noise is deafening: The whole going-blind thing is bad enough; you just wish the movie would shut the hell up. Shot by César Charlone in cool tones and grainy textures, "Blindness" doesn't look so hot, either: It has a bleak-chic look that feels aggressively designed, like a fashion statement.

Actually, there are two performers who make "Blindness" almost worth watching, and one of them isn't a human: The movie features what is perhaps one of the cutest dogs on the planet, a fuzzy charmer who shows up to -- I kid you not -- teach this ragtag clan about cheerfulness and humility in the face of despair. At least it's a performance, unforced and convincingly doglike, that's easy to buy.

But even this lovely creature is outshone by Moore. The plague victims in "Blindness" aren't plunged into darkness; instead, everything goes white. And Moore, her hair dyed blond for the role, is herself nearly bleached out, an apparition of generosity and compassion who seems in danger of disappearing at any moment. Moore takes the movie's stiff, signpost dialogue and delivers it in a way that's consistently believable. While everyone else fumbles around, she gets down to work, letting air and light into this dank, self-consciously miserable movie. She's a miracle worker, and whatever Meirelles paid her, it isn't nearly enough.