"How to Lose Friends and Alienate People"

Simon Pegg is utterly charming as a troublemaking British journalist in this celeb-media sendup. 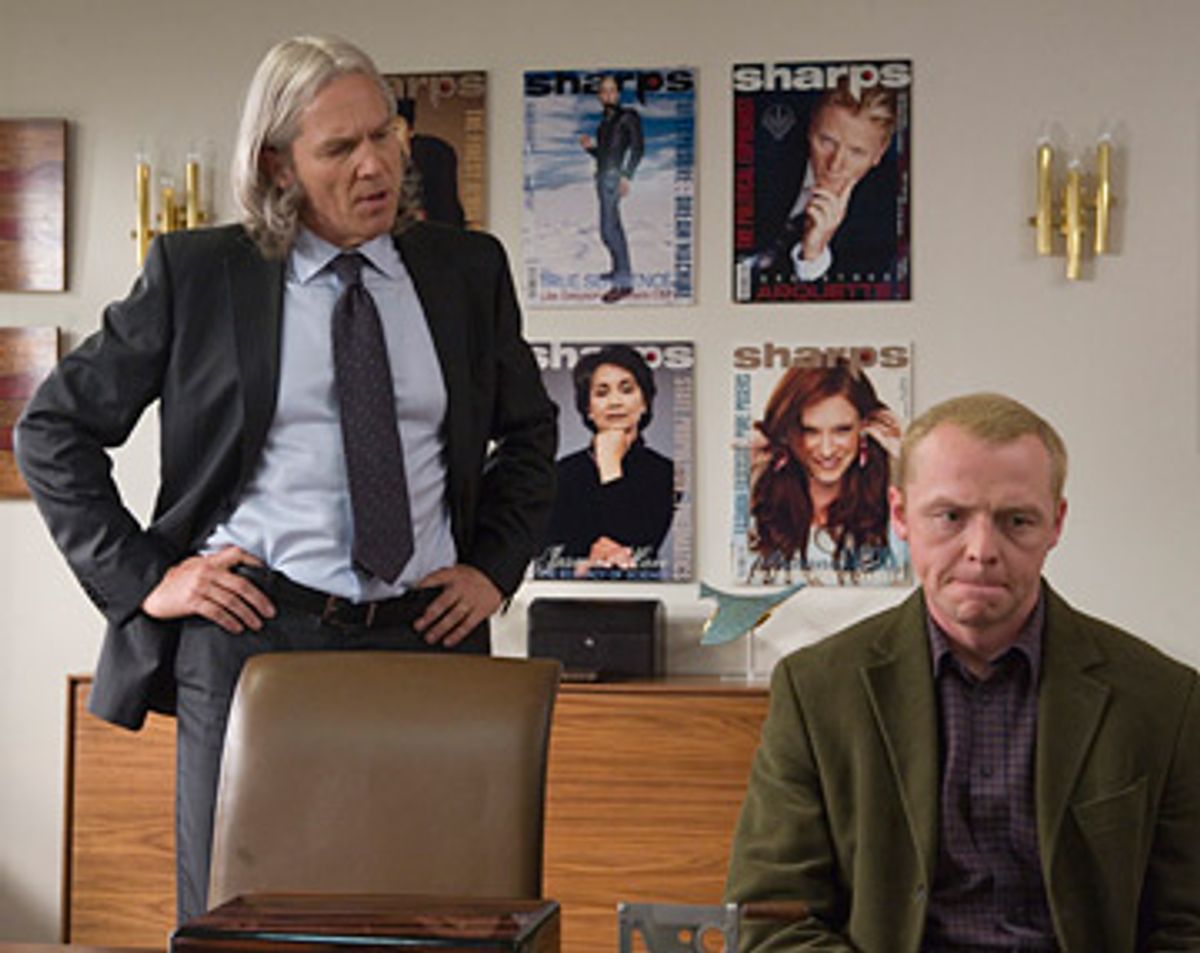 As editor of London's satirical Post Modern Review, Sidney Young crashes parties, brazenly lies and leaves a trail of mayhem and messes in his tasteless wake. He is, in short, the quintessential British journalist/troublemaker, a baby Christopher Hitchens full of swagger and id.

As Young, Simon Pegg, the co-writer and star of the gloriously weird "Shaun of the Dead" and "Hot Fuzz," manages to be utterly charming while wreaking havoc. "The only thing I'm good at is pissing people off," Young sighs at one point. Fortunately, he's living in a day and age where pissing people off is a viable career path. It's not surprising, then, that soon after running a scathing cover story about American magazine editor Clayton Harding (Jeff Bridges), Young finds himself on the receiving end of a job offer from the man himself.

Off to New York and to work at the celebrity butt-kissing Sharps magazine, Young swiftly obtains a scuzzy apartment, a meddling landlady and the scorn of both his co-workers and the entire Manhattan A-list. He quickly alienates his dapper, smarmy editor, Lawrence Maddox (Danny Huston, oozing metrosexuality from every pore), and his powerhouse agent, Eleanor Johnson. As Eleanor, Gillian Anderson is a vicious treat -- elegant, unruffled, confidently brokering access to her clients and looking all the while like she might unhinge her jaw and swallow somebody whole.

But chief among Young's detractors is his colleague Alison (Kirsten Dunst), a woman so pretty, so perky, so brimming with contempt for Young that she seems to have sprung fully formed from a romantic-comedy focus group.

Dunst, as an inspiring novelist mired in an unsuitable relationship, has nearly nothing to do here but furrow her brow in disdain until an inevitable drunken bonding experience thaws her heart. (Why, by the way, does Hollywood find binge drinking such an effective romantic plot device? From "27 Dresses" to "What Happens in Vegas," nothing lets the audience see the warmer, sexier side of that uptight babe like pouring a few cocktails down her fictional throat. Somewhere, Joe Francis is beaming with pride.) While Dunst and Pegg have a friendly energy, there's nothing in either the script or their rapport to convince the viewer they're right for each other. Being gracious when someone pukes on you is hardly the bedrock of a great love story.

Slinking into the vomit-stained path of our would-be couple is Sophie Maes (Megan Fox), a Chihuahua-toting actress with little in the way of brains but a genius for getting attention. One look at Sophie, brazenly sashaying through a swimming pool in an evening gown (mere moments after someone has referenced "La Dolce Vita" as the greatest film ever made) and Young is smitten. And Sophie, her star in rapid ascent, is drawn to the rather pathetic spectacle that is Young just enough to make the guy think he might have a shot. But first, he has to sell out.

Though Young initially storms the offices of Sharps with a gleefully offensive wardrobe, a nonexistent work ethic and a willfully adversarial relationship with tact, it's only a matter of time before he assimilates into the publicity-pandering borg. The film won't let it be enough for Young to be seduced by the perks of his position -- the promotions, the obscenely fabulous swag, the opportunity to have sex with movie stars, because who'd fall for that? No, he only loses his way when it seems he's lost his chance with Alison.

Young's true soul mate isn't Sophie, of course, but it's really not Alison either -- it's his boss, Clay. The brightest spots in "How to Lose Friends" are in the far too infrequent scenes between the two men, and in the way they see through each other with remarkable clarity and mutual admiration. Young knows -- and eagerly exploits -- the fact that Clay recognizes his rebellious, youthful self in his bull-in-a-china-shop protégé. And Clay, all white-haired, broad-shouldered and full of barely suppressed self-loathing, likewise knows that Young's boorishness is a front for his wide-eyed awe of the rich and famous.

Bridges and Pegg make sublime counterpoints to each other -- Bridges has the cool smolder of a man who's as angry and rude as he probably was in his 20s, just far better compensated. The one instance he permits himself to break into a brief, wide smile is the high point of the film, a sly acknowledgment that, somewhere within this titan of publishing, there beats the heart of the Dude. Pegg, meanwhile, flailing and disastrous, is never funnier than when he's the deer in Bridges' headlights. If only the film explored more of their oddball chemistry.

Instead, the movie, based on Toby Young's scathing memoir of his stint at Vanity Fair, aims to be both a satire of celebrity and a "His Girl Friday" romance. The tacked-on love story is an unfortunate display of lack of confidence because, as "Tropic Thunder" proved, the insanely surreal world of celebrity culture is all the dumb fun an audience could ask for.

When Pegg is breaking protocols with his uniquely ballsy aplomb, dancing like a doofus or doing battle with Venetian blinds, the film almost flies. And in its depiction of industry idiocy, the film has moments of wicked wit. Director Robert Weide, a veteran of "Curb Your Enthusiasm," is no stranger to the dark and the uncomfortable. The scenes of publicist Eleanor smugly line-editing one of Young's features, or the impossibly hot Sophie's star-making biopic of Mother Teresa, crackle with vicious humor. It's frustrating then, watching the movie turn on itself, becoming as safe and self-congratulatory as, well, a Vanity Fair puff piece. Like the characters it portrays, "How to Lose Friends" eventually becomes the very thing it mocks, its delectable naughtiness sacrificed to sentiment and audience appeal. If only those early, obnoxious versions of Clay and Sidney could infuse the works with a little more much-needed rudeness.