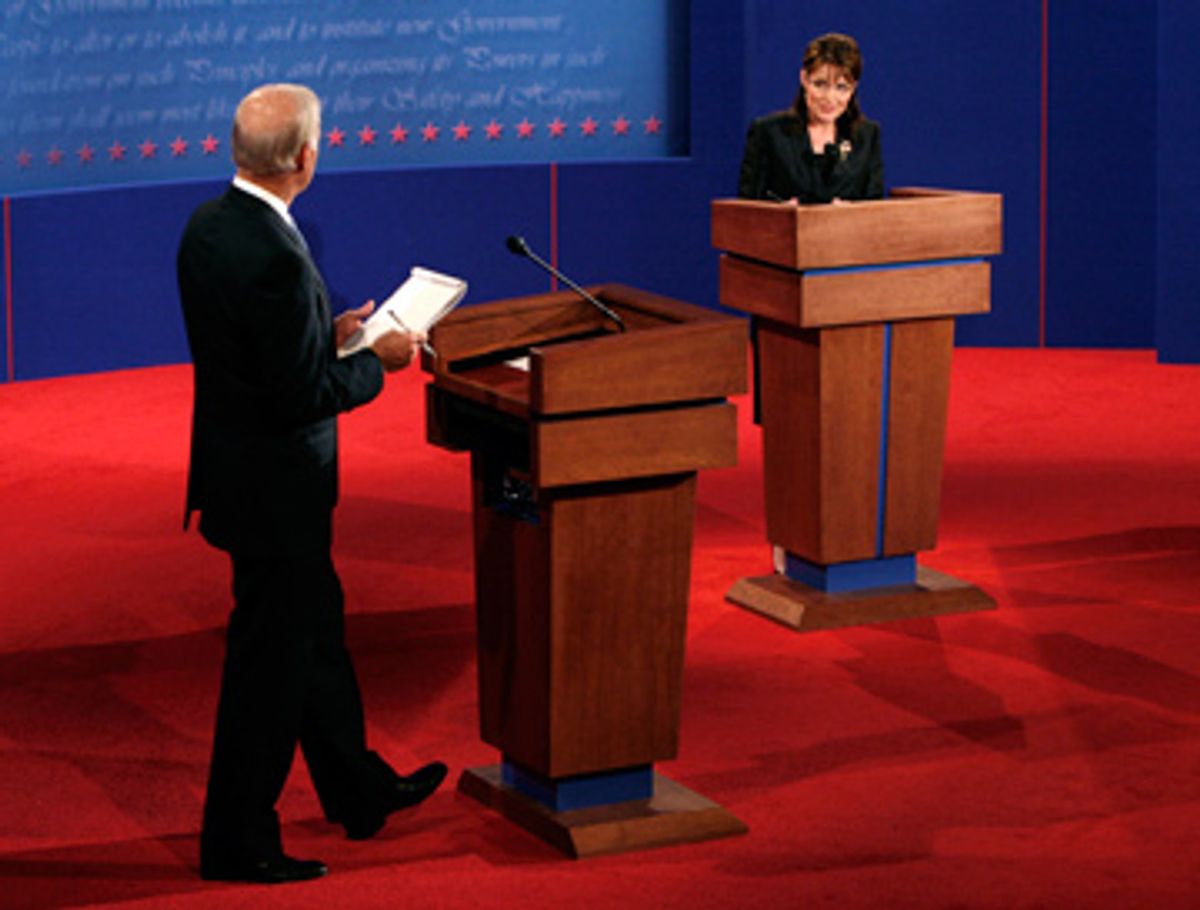 There were two debates going on in St. Louis Thursday night. Joe Biden was debating John McCain. And Sarah Palin was debating Sarah Palin -- at least the version of her that most of America has seen on TV for the last few weeks.

As far as those particular battles went, they both might have won. Biden was ruthless in going after McCain on the economy and on foreign policy, all but ignoring Palin to focus on the top of the ticket and present contrast after contrast between McCain and Barack Obama. (And a few between Obama and George W. Bush for good measure.) It may have been the most disciplined performance of Biden's political career -- though given his proclivity for embarrassing gaffes, that's admittedly a low bar. And speaking of low bars, Palin cleared hers. This was not the Sarah Palin who was stumped when asked, just a few days ago, to name a single Supreme Court case she disagreed with or to list a newspaper she read. Yes, she got a little shaky when the questions strayed too far into the details of foreign policy, and she frequently seemed to be pushing the "play" button on preprogrammed talking points. Still, the meltdown even some Republicans feared ahead of the debate didn't materialize.

But overall, that probably adds up to a win for Biden -- or rather, for Obama. (Undecided voters insta-polled by various networks thought Biden won, by pretty hefty margins.) Palin had so much work to do convincing voters she belonged on the stage that she wasn't able to be as effective a messenger for McCain as Biden was for his ticket. She might have met a basic standard of competence, but only a cynic (or a McCain aide) would say that gave her the edge. With Obama building on his lead in national and battleground state polls every day, another debate -- like the first presidential encounter last week -- that did little to change the overall dynamic of the race wasn't what McCain needed.

From the moment Palin walked onstage and asked Biden, "Hey, can I call you Joe?" she projected a folksiness that constantly threatened to tip over from "authentic" to "a little overdone," all delivered in the kind of nasal snow-belt honk that won Frances McDormand an Oscar in "Fargo." (For instance, immediately after greeting Biden, she blew a kiss at someone -- either moderator Gwen Ifill, which seems implausible, or more likely, Alaska's "First Dude" in the front row.) That tipping point probably came around the time she spouted this line, which sounded like something out of "Leave it to Beaver" meets "Hardball": "Say it ain't so, Joe, there you go again pointing backwards again. You [prefaced] your whole comment with the Bush administration. Now, doggone it, let's look ahead." Sometimes her folksy language got a little garbled -- like when she used what is evidently a favorite phrase and said mortgage lenders were "rearing that head of abuse."

She might have undone whatever good will she earned with her "aw, shucks" Wasilla hockey mom ways, though, when she utterly failed to react after Biden choked up while discussing the death of his first wife and their daughter. "The notion that somehow, because I'm a man, I don't know what it's like to raise two kids alone, I don't know what it's like to have a child you're not sure is going to -- is going to make it -- I understand," he said, after Palin said her experience "as a mom" helped persuade McCain to pick her for the ticket. "I understand, as well as, with all due respect, the governor or anybody else, what it's like for those people sitting around that kitchen table. And guess what? They're looking for help. They're looking for help. They're not looking for more of the same." Palin's response was ice cold: "People aren't looking for more of the same. They are looking for change. And John McCain has been the consummate maverick in the Senate over all these years." For that matter, so was the way she brought up, apropos of not very much, Biden's remark in July that offshore oil drilling was an attempt to "rape the continental shelf." And the way she -- not Biden -- brought up his wife, Jill. "I know education you are passionate about with your wife being a teacher for 30 years, and God bless her," Palin said. "Her reward is in heaven, right?" (That was followed immediately by Palin giving "a shout out" to her brother's elementary school students.)

Clearly, Palin came prepared with little time-bomb attack lines from McCain strategist Steve Schmidt, set to detonate at specific cues. When Biden blasted the Bush administration's Middle East policy -- "It has been an abject failure" -- Palin had a line ready that had absolutely nothing to do with the region. "When we talk about the Bush administration, there's a time, too, when Americans are going to say, 'Enough is enough with your ticket,' on constantly looking backwards, and pointing fingers, and doing the blame game," she said. "For a ticket that wants to talk about change and looking into the future, there's just too much finger-pointing backwards to ever make us believe that that's where you're going." When Biden promised to end the war, Palin had another zinger ready: "Your plan is a white flag of surrender in Iraq and that is not what our troops need to hear today, that's for sure."

She had apparently been coached to head back to a few safe topics whenever she could, regardless of what the question was. So when Ifill asked her about what promises she and McCain had made that the $700 billion Wall Street bailout might crimp, her answer was all about how she broke up oil monopolies in Alaska. A few minutes later, she started talking about energy again, in response to a question about bankruptcy laws.

But there was no real standout moment headed for the already large YouTube archive of Palin pratfalls. The closest she came to really floundering was when she answered a question about when nuclear weapons should be used. "Nuclear weaponry, of course, would be the be all, end all of just too many people in too many parts of our planet, so those dangerous regimes, again, cannot be allowed to acquire nuclear weapons, period," she said. "Our nuclear weaponry here in the U.S. is used as a deterrent. And that's a safe, stable way to use nuclear weaponry." Of course, when you sound a little unsteady talking about nuclear war, it might matter more to the average undecided voter than if you sound unsteady talking about, say, the details of the foreign aid budget. (She pronounces it, à la Bush, as "nucular," but that might just be more folksy charm.)

Nor was there another clip for Biden's long gaffe file -- especially nothing to suggest sexism or condescension. In Biden's answers, Palin was always "Governor," while McCain was "John" and Obama was "Barack." (Biden was, on a few unfortunate occasions, "Joe Biden" instead of "I.") He was clearly more comfortable throughout, dropping facts and statistics into every answer without showing the prep work that helped put them at his fingertips on command. All of them were aimed at McCain. Biden hammered him on alternative energy -- "John McCain has voted 20 times in the last decade-and-a-half against funding alternative energy sources, clean energy sources, wind, solar, biofuels," he said, repeating the "20 times" twice more. All those facts did put Biden on the edge of too much Senate wonkiness here and there -- he raised, and then dismissed, the difference between Chapter 7 and Chapter 13 bankruptcy at one point, and he completely garbled an explanation of how much McCain's healthcare plan would cost taxpayers. Later, he proudly boasted, "That's why I led the fight against Judge Bork." Someone should have reminded him that his ticket is trying to reach younger voters, not the ones who are nearly McCain's age.

But he had some of his own attack lines filed away, too, and he deployed them a little less clumsily than Palin had. He called Dick Cheney "the most dangerous vice president we've had probably in American history," after Palin said she agreed with Cheney that "we have a lot of flexibility" in how the office's powers are defined. When Ifill asked how a Biden administration, if it came to pass, would differ from an Obama administration, Biden first said it would be tragic if he reached the Oval Office, then saw the question for what it was: an opportunity to tell viewers how great they'd have it in an Obama administration. "I would carry out Barack Obama's policy, his policies of reinstating the middle class, making sure they get a fair break," he said, ticking off 10 areas where the Democrats would end Bush policies.

Ah yes, the kitchen table issues. The economy was what put Obama ahead in the polls at one point this summer, though it feels like decades ago in this campaign's hyperactive timeline, before talk of celebrities and pregnant teenagers and pit bulls steered the election onto more favorable turf for McCain -- which is to say, any turf except how badly screwed-up most voters think the country is these days, after eight years of a Republican in the White House. And with the meltdown on Wall Street in September, it's what put Obama ahead again now, almost exactly a month before Election Day. Really, all Biden had to do Thursday night was stay out of the way. Palin may have met the low expectations for her, but she didn't do much to distract voters from pocketbook anxieties, and she didn't do much to make them believe Obama won't try to help. And time is starting to run out for her side.