Jonathan Demme recaptures the ease and warmth of his early movies with this affecting take of a family wedding. 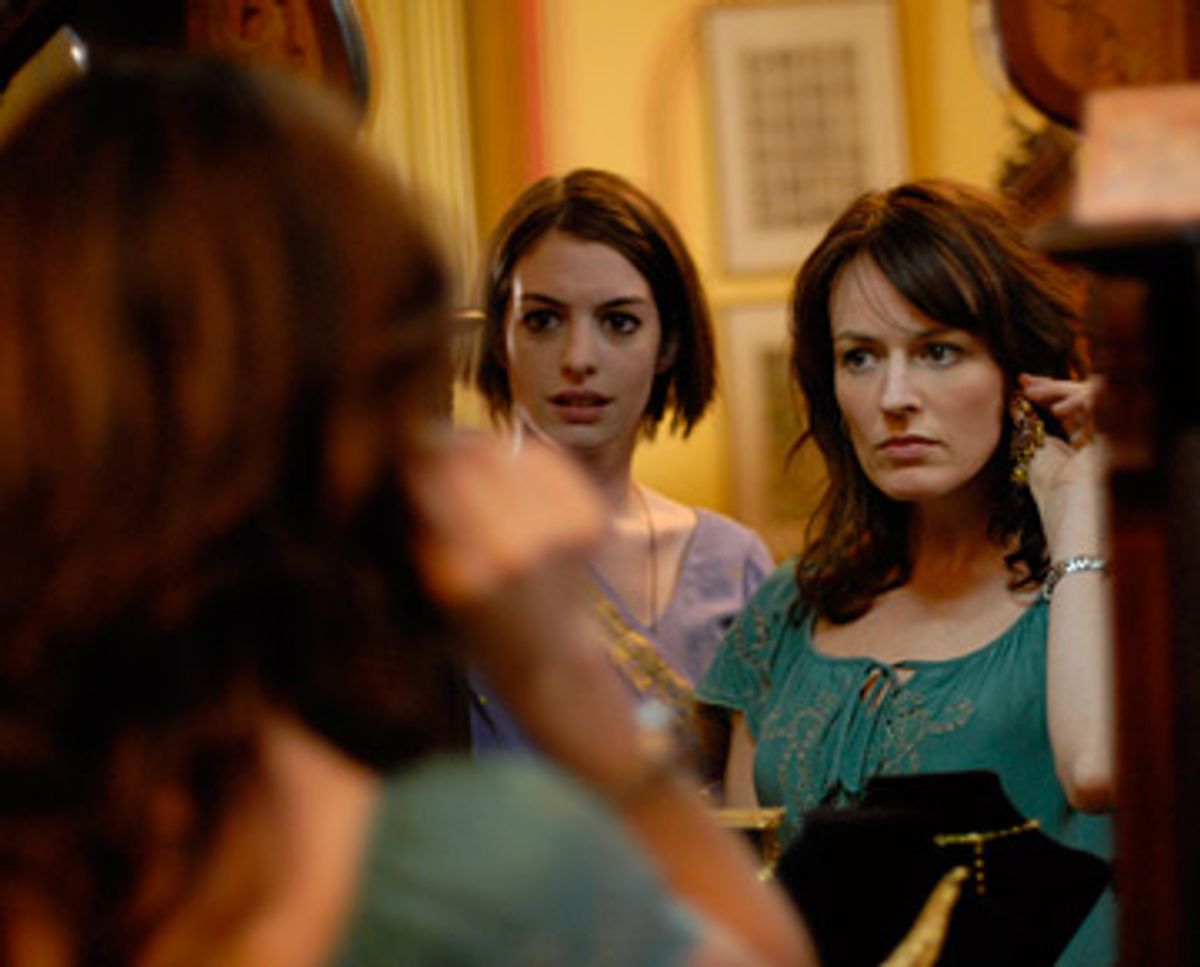 In the early part of his career, with movies like "Melvin and Howard" and "Handle With Care" -- and even, a little later, with "Something Wild" -- Jonathan Demme proved himself as a filmmaker with a deep affection for oddball America. In those movies, his characters can often drive us nuts, especially at first. But by the end, they've become the kinds of friends we didn't know we wanted to make, people whose foibles and idiosyncrasies we can connect with even though they may be nothing like our own. In the world of those movies, we're a nation of people who communicate via disjointed conversations and awkward pauses. Our language is ellipses; we understand each other best by paying attention to the spaces between words.

Demme's career took a turn away from that sort of intimate, loose-jointed filmmaking with stiff exercises like "Silence of the Lambs" and "The Manchurian Candidate," and with oversize and overwrought projects like "Philadelphia." Those are the kinds of big prestige products a director makes once he has "arrived," and often they're not nearly as good as the ones he made while he was getting there. But with "Rachel Getting Married," Demme has once again scaled back, making a picture that has some of the ease and warmth of his earlier movies, although it also feels stripped down and direct in a way that's new for Demme. Anne Hathaway plays Kym, a former model who comes from a well-heeled but extremely dysfunctional Connecticut family; she's in rehab, and we learn early on that she's responsible for some horrible tragedy that the family has suffered but is reluctant to talk about. Kym's sister, Rachel (Rosemarie DeWitt, of "Mad Men"), is about to be married, and Kym is granted a leave to attend the wedding. She shows up in her slouchy dark clothes, with a choppy, angular haircut; her eyes, big, dark and mistrustful, seem to have been programmed to shut everyone out. She slings bons mots that are more icy than clever: Cooing over how thin Rachel has become, she asks her sister if she's "puking again." No one -- save her father, played by Bill Irwin -- is glad to see Kym, and everyone lets her know it. The coolest cat of all is Debra Winger's Abby, the family's deposed matriarch. Abby is the kind of woman who pops the babies out and then, for the rest of their lives, looks at them blankly as if to say, "What am I supposed to do with these?"

The pre-wedding festivities bring out the worst in everyone, and the proceedings are sometimes maddening to watch. That's part of the design: Working from a script by Jenny Lumet, Demme is out to capture the messy unpredictability of family relationships, to suggest the ways we sometimes can't help wanting to control others' behavior, even possibly rewrite their histories into a form that might be more convenient, more palatable, for us. Demme is alive to the mysteries people carry inside them. These family members pick at one another, and rarely affectionately: Sometimes they seem to want to drive corkscrews of pain under each other's skin. Rachel, in particular, is deeply annoyed that Kym can't hold her life together; she's convinced her sister is using her personal troubles to control the family, and her behavior toward Kym borders on cruelty. (Dewitt's performance shows off lots of intentionally bared sharp edges.)

Demme -- making extensive use of hand-held cameras, in a way that actually serves the story, a rarity in this day and age -- puts us inside this family and makes us feel their suffering. This isn't goldfish-bowl filmmaking, in which a director puts his characters inside a claustrophobic environment and invites us to observe how troubled and interesting they are. That's the feeling I got from Noah Baumbach's "Margot at the Wedding." He may have had some feeling for his characters, but he couldn't translate it into anything deeper than a psychological experiment.

Demme, on the other hand, is with his characters every step of the way. There were times I wasn't sure what he was trying to get at. The movie features a big showdown scene between Kym and Abby, and although it does feature a capper that shocked me, I'm generally not a fan of screaming-match acting. Winger, as Abby, is much better in her quieter scenes: She gives the sense of a woman who, when it suits her, likes to wrap herself around her children's lives like a boa and squeeze. This is a chilly performance, but also a strangely affecting one: We don't want to be reminded that bad mothers are people, too, and Winger -- with that throaty voice, and that assertively charming twinkle in her eye -- never lets us forget that piercing reality.

Maybe the characters Demme is showing us are in some ways too real. There were stretches of "Rachel Getting Married" that made me feel restless and annoyed, itching to get away from the aggressive, overgrown neuroses of these characters: A little of that goes a long way in the movies, and a filmmaker doesn't need to fetishize characters' rampant self-absorption to get the point across. But just when someone says or does something that makes you want to shout at the screen, Demme pulls back and reminds us -- by focusing on a particular face, or by showing us a character's awkward body language -- that these are, quite simply, people in pain. Hathaway, in particular, with those wary eyes and lips that always look on the verge of quivering, brings much of that pain to the surface: This isn't a character you want to hug -- she's got too many angles -- but Demme feels so deeply for her that he makes us feel for her, too.

He also knows what we need as an audience, and when Rachel and Kym broker a tender reconciliation, one that's all the more affecting for the way it isn't explained, he gives it to us. The scene is like a salve applied to all this on-screen suffering -- though even Demme seems to know that a salve is not a cure. The picture may end a little too breezily, but Demme knows we have to be left with some hope for these wandering souls. Someday, they'll find their way home; it just may not be the same thing as going home.